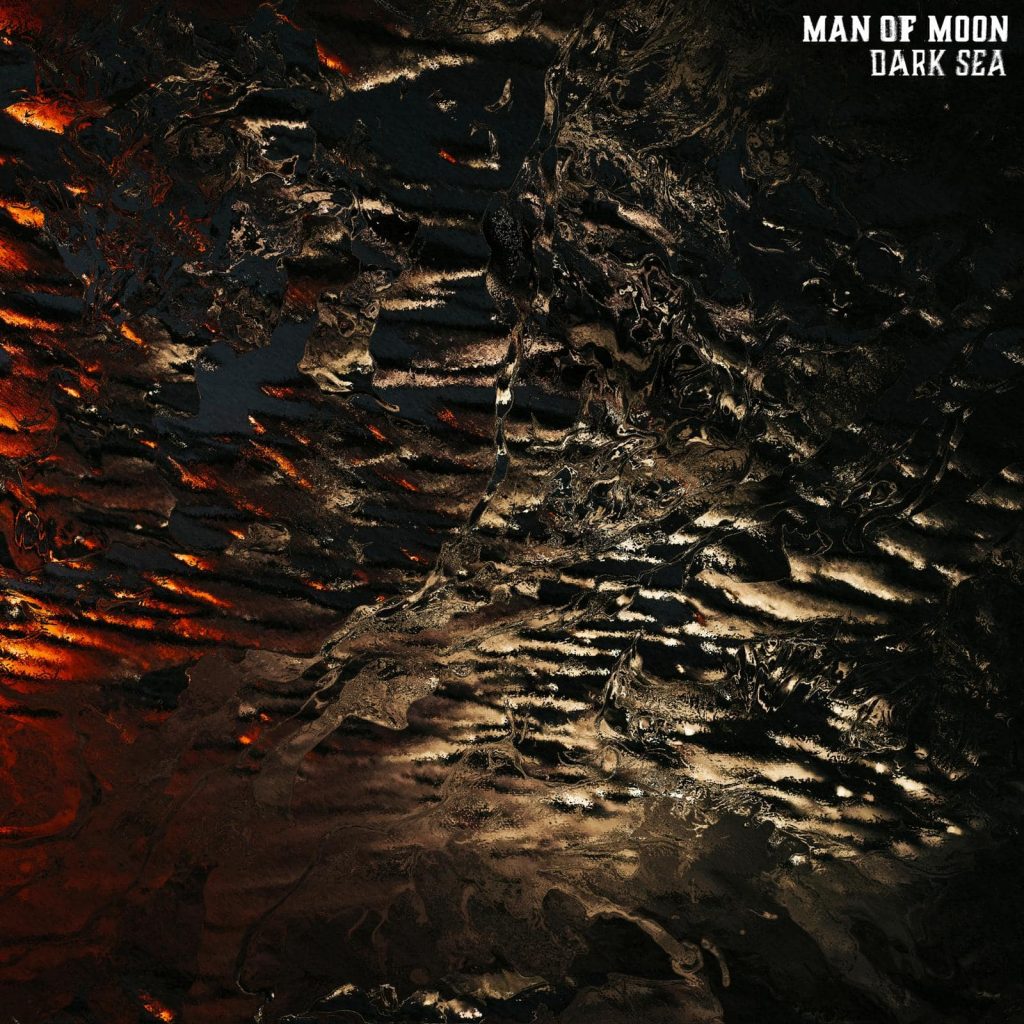 MAN of Moon’s ‘Dark Sea’ is a stunning debut LP from a band who have been promising something monumental since their breakthrough five years ago.

‘Dark Sea’ is more than just a collection of well written songs, it is a sonic environment; a moody and foreboding soundscape that washes over and completely submerges you. This is an album that should be enjoyed in its entirety, with your headphones on and your eyes closed. Allow yourself to become lost in it and enjoy its ever-evolving ambience.

The album begins, naturally, with ‘Intro’. The first thing you hear is lingering guitar feedback and a deep, persistent synth. Punching along like a heart that’s beating faster than it ought to be. There’s an ambient tension created here that never really leaves the record at any of its various stages. At one minute and seven seconds the first wall of noise hits, and from this point on it really does feel like you’ve dived head first into ‘Dark Sea’ and that you’re only going to get out of it by listening to all ten of the tracks.

Fans will recognise Track 2, ‘The Road’ as a reimagining of their first ever release. To call it ‘more mature’ would be cliched and unfair on the song’s initial form, but it has certainly been drastically repurposed to fit nicely into the album’s opening. It’s also thematically analogous as, in a way, it represents the band’s journey to becoming the outfit they are now while also serving as the exposition of the album’s journey.

The rest of the album is a masterful display of songwriting combined with creative, intelligent structuring that ultimately makes an extremely satisfying and cohesive piece of work. The album ebbs and flows with the aggression and calm of an ocean.

Track five, ‘Interlude’, has a feeling of calm followed by unbridled force that puts one in mind of a tsunami, while also acting as a transitional song as the album settles into its more atmospheric second act. In the latter half of the album we find ‘Ride The Waves’ and ‘Rust’ which were previously released as part of an EP and as a single respectively. However listening to them as part of the body of work they were written to be a part of gives them life anew, as with ‘Strangers’ and ‘When We Were Young’.

Musically this album has a lot of identifiable influences. Man of Moon have always had a sort of post-punk duo style akin to Suicide, and that influence is very much still there, but its now blending with shades of Radiohead, psychedelia, late 90s/early 2000s rock/metal, and even shades of acid house at times. ‘Dark Sea’ is consistent without being repetitive, and varied without feeling scattergun.

We’ve always been fans of Man of Moon, and although this album feels like it was perhaps a long time in the making, it was certainly worth the wait. You can preorder the album here ahead of its release on September 25th here via Cosmic Pool Records. ‘Esther’ is the latest single from Dundee’s Jeshua. Mt. Joy are with what might very well be your next song of the summer. Ruby Gill’s new single ‘Public Panic Attacks’ is an anthem for the anxious. Pretty Preachers Club are back with a new single called ‘Try Another Way’. Rachel Chinouriri ‘Better Off Without’

Rachel Chinouriri reinforces her status as one of the UK’s brightest new gems on new EP ‘Better Off Without’. Glasgow’s Pandas have shared their new EP in full. RINA SAWAYAMA has announced details of her next album, alongside euphoric new single ‘This Hell’.