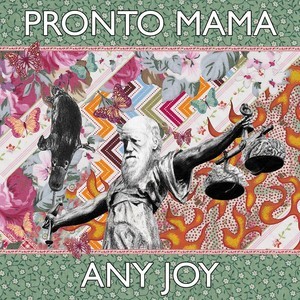 TRIUMPHANT, soulful, witty and utterly mesmeric from start to finish; Pronto Mama’s debut album Any Joy is everything you want it to be and more. With an unparalleled musicianship and steadfast commitment to their craft, the six-piece have established themselves as one of the most eclectically talented outfits to emerge from Glasgow in some time.

Building on the solid foundations put in place by their previous EPs Lickety Split and Niche Market, Any Joy is an entirely distinctive and all-encompassing piece of work; a truly outstanding record that will surely catapult the band onto the success they so rightly deserve. They say that a debut album is a lifetime in the making and never has this rung more true – through its many layers and textures, Pronto Mama evoke a melting pot of emotions from pure joy to deep melancholy; from hope to hopelessness; from vice to virtue. And it’s all done with a thrilling combination of eclectic instrumentation, soulful lyrics and a wry sense of humour

Drawing influence from contemporary indie bands such as Bombay Bicycle Club with their use of unusual time signatures and dizzying blend of instruments, there is also something distinctly Glaswegian about the whole thing; an inherent Scottishness that stems from their sharp and often self-deprecating lyricism that is reminiscent of bands such as Admiral Fallow, Frightened Rabbit and The Twilight Sad. It all comes together to create a sound that is entirely of their own devising though. From the flourishes of full-bodied brass to the warm sound of synths to the unbelievably tight and complex rhythm section, there may be a lot going on but it comes together brilliantly and with unparalleled ease. With each track as well-crafted as the next, it is down to the two principal songwriters to tie things together with their wonderfully soulful twangs; in Marc Rooney and Ciaran McEneny, it is fair to say that the band possess two of the most attractive Scottish brogues we’ve heard in some time. From the more bombastic indie-rock anthems to the quieter, introspective moments, you hang onto their every word and observation.

Soft when it needs to be while simultaneously demanding attention with punches of jazzy inspiration and pop-laden choruses, the band’s ability to shift seamlessly between moods and tempos is never clearer than in its opening tracks. ‘Bottom Feeder’ makes for a dark and introspective introduction to the album; Marc Rooney conjures sinister images of vice and hopelessness over some pared back guitar work before the track finally erupts with fiery defiance and thunderous instrumentation. From its dark and foreboding openings, ‘Cold Arab Springs’ is an upbeat and sprightly contrast; built around a bright and summery guitar lines and propelling rhythms, it demonstrates the outfit’s poppier sensibilities with a more positive outlook.

Alongside the new tracks, fans will be buoyed by the appearance of some old favourites. Lead single ‘Arabesque’ opens with the familiar sound of rich keys before developing into a triumphant hail of horns, funky basslines and bombastic percussion. Meanwhile, ‘Rubber’ is given a more stylish and carefree style of production which pays heed to its funky groove and jazzy stylings; Ciaran McEneny’s laid-back brogue adding a good dose of soul to its euphoric chorus.

‘You’re Only Human’ is as fast, strong and confident as it was on Niche Market, while ‘One Trick Pony’ is another example of the band’s fiercely original approach to songwriting; flitting between heartfelt vocals and an explosive hail of brass and drumming, their witty approach to their craft comes to the fore with some sharp lyricism and an uncut shout from the studio; ‘Don’t ruin it!’.

As has become Pronto Mama’s way, a number of ingenious curveballs have been thrown in for good measure. Latest single ‘Double Speak’ is built around astounding percussion from Martin Johnston and features some thoughtful quick wordplay from Marc Rooney while new track ‘Bully March‘ is a brooding synth-heavy number which is unlike anything we’ve heard from the band thus far; a deeply moving and stirring affair, it becomes increasingly momentous as it progresses.

With an ability to pare things back to their most introspective and measured, the six-piece demonstrate their insatiable musical chemistry on acapella track ‘Sentiment’. Already a popular feature of their live shows, the track’s inclusion is a bold and intelligent move which shines a light on their raw talent and natural songwriting abilities. Flecked with humour (“should I try or should I just go get pished”), their wonderful harmonies provide one of the standout moments of the album.

Following years of hard work and gritty determination, Pronto Mama have laid down a striking footprint of their unique chemistry and unparalleled musicianship. An album which unleashes new meaning with every listen, you’ll be hard pushed to find a more eclectic and addictive collection of songs to come out of Scotland this year.

Any Joy is out now via Electric Honey. Health and Beauty ‘I Am Not On The Wall’

Health and Beauty (aka Glasgow-based artist Calum Stewart) has returned with a stunning second single called ‘I Am Not On The Wall’.

LVRA has kicked off 2023 with the release of new single ‘anxiety’.

Redolent ‘Death in the Family’ ‘CUT IT’ is the first new music from VLURE since the release of their critically acclaimed debut EP ‘Euphoria’, on notable indie So Young records. Fiercely DIY, the band have self-recorded and self-produced the single and are self-releasing, having also … Quinny ‘My December (How The Sun Stole Christmas)’

Quinny has revived his Christmas tradition with the release of a new song called ‘My December (How The Sun Stole Christmas)’.