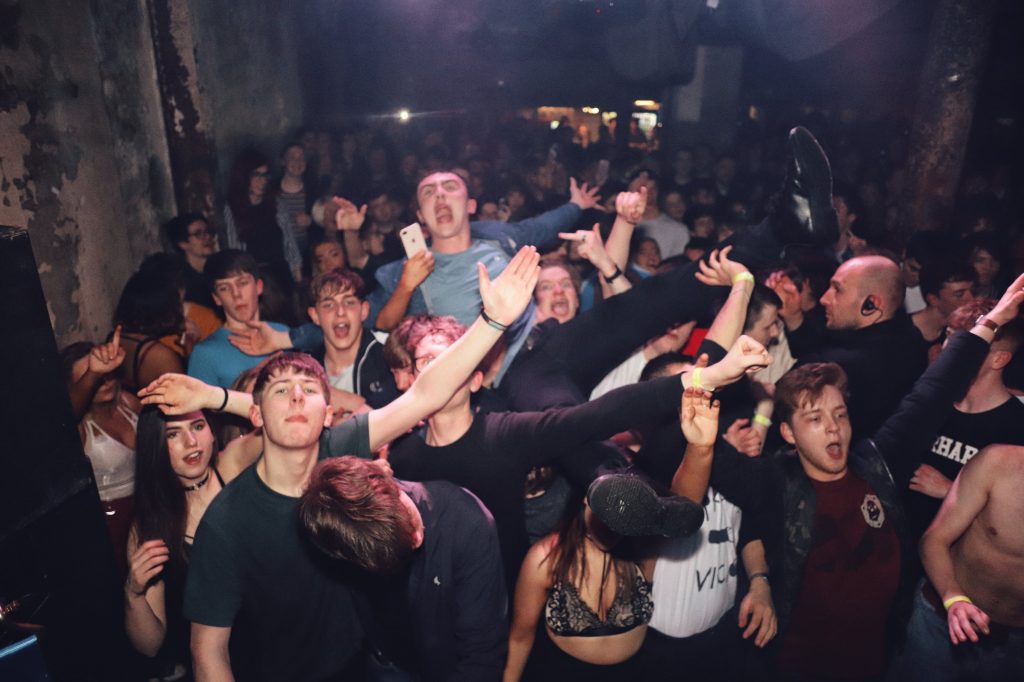 As the eyes of the music world are fixed on Austin, Texas for another year of SXSW, here is a guide to the unstoppable wave of Scottish bands set to make waves at this year’s festival.

Forming in Kilmarnock, Scotland, in early 2010, Fatherson immediately captured hearts with their raw, honest alt-rock sound. Inspired by Scottish stoicism as much as their own personal turmoil, debut album ‘I Am An Island’ and its 2016 follow-up ‘Open Book’ were masterclasses in full-throttle rock songwriting, and garnered support from (and tours alongside) their north-of-the-border brethren in Biffy Clyro, Frightened Rabbit, Idlewild and Twin Atlantic, as well as further runs alongside the likes of Kings Of Leon, Augustines, Enter Shikari and more.

“When you’re away on tour for a long time and you haven’t been back home, there’s a realism in people, especially in Glasgow, that’s very refreshing to come back to,” says Strain of that Scottish connection, “I think the music encapsulates that quite well.” It’s an attitude that Leighton’s songwriting feeds off, too. “There’s an element of not being allowed to be too big for your boots,” he explains. “Your ego will get pummelled out of you as soon as you get home, and that’s good grounding. Even the people who are massively successful who come from here, when you meet them in real life, they don’t have this sensibility of narcissism. It’s not cool to boast about yourself, so just write about things that you know.”

That no-bullshit, heart-on-sleeve approach is integral to Fatherson’s sound and ethos.

With the sweetness of bubblegum pop, the easy swagger of classic college rock, Phil Spector’s widescreen ambition, and the gritty rumblings of the best riot grrrl and grunge, LUCIA have won the hearts of music-lovers, critics and fellow artists with just a couple of EPs and a few years of relentless touring. This is modern rock n’ roll driven by instinct alone. The perfect soundtrack for a teenage dream.

From being discovered as a busker on the streets of Glasgow to playing with the likes of Black Honey, The Big Moon, Neon Waltz and The Undertones, their DIY spirit and knack for a dreamwave banger now finds them working with Arctic Monkeys and Florence + The Machine collaborators and coming to a town near you.

Speaking about the new single front-woman Lucia Fairfull explains, “Blueheart is about the frustration you feel when someone close to you is trapped in a toxic relationship that they are too scared to let go of.”

Rascalton are Jack, Steve, Mark and Grieg, a project born in a garage between four friends. In 2017 their debut single This Is It introduced to the world their no-nonsense aggro punk sound. In a short space of time they leapt fully formed from the basements of Glasgow’s flourishing Punk/Garage scene to selling out shows around the country and touring Europe with Benjamin Booker. The band took 2018 by storm with their debut EP CSC & supported bands such as Idles, Cabbage and Marmozets along with multiple festival appearances. The band closed out the year with their biggest headline show at a sold-out 500 cap Saint Luke’s, Glasgow. The much anticipated new single Gold/Eddy drops on Council Records in March. ·

Rock music is nothing without its idols. The kind of gender-fucking, convention-skewering icons that have misfit teens smudging their eyes with kohl and covering their bedroom posters with lipstick kisses. Whose music teleports you into a kaleidoscopic dimension while also making your everyday life richer. If you haven’t had that feeling for a while, look no further than The Ninth Wave, today’s most intoxicating new band.

The four-piece music is majestic dark post-punk laced with stealth pop hooks and a firmly DIY ethos — at one 2016 gig in their hometown of Glasgow, they created a makeshift stage from disused palettes in a railway arch. But, unlike many of their scene’s peers, they treated their scrappy live shows as if they were being Periscoped to the world, and dressed accordingly in razor-sharp outfits that looked transplanted straight from the iconic ’80s counter-cultural club night Blitz. As well as cementing a reputation as a must-see live act, and alongside their two early EPs being lauded by BBC Radio 1 and The Guardian, their style nous also led to organic collaborations with fashion iconoclasts including Saint Laurent’s Hedi Slimane and London’s most disruptive new designer, Charles Jeffrey. “We never started with a mindset of ‘We want to be like this band,’” says frontman Haydn Park-Patterson, with a decisive tone. “We’re always trying to do something new.”

After several long years marked by devastating losses, broken relationships, lineup changes and numerous tours across the globe playing shows alongside bands like Frightened Rabbit, The Cribs, Death Cab For Cutie and Japanese Breakfast, Scottish rock trio PAWS will soon release Your Church On My Bonfire, their fourth album and first full-length since 2016’s Mark Hoppus-produced ‘No Grace’.

Rather than let the massively life-altering changes they endured overwhelm them or drive them into silence, PAWS chose to embrace those changes, allowing what came after to inspire a new version of the band reflective of the people they became in the process.

Produced by Andy Monaghan of Frightened Rabbit, ‘Your Church On My Bonfire’ comes out April 26th.

Shades of Imagine Dragons, Kasabian and Royal Blood weave their way through SAINT PHNX’s sound, but this duo are unique. A big helping of attitude, a willingness to experiment and a knack for writing rousing choruses ensures they make enough noise to rival a full band, and they’re not afraid to get real in their lyrics.

With only three songs out at the time, attention soon came to the brothers as their second track King was being played on US radio and they received a call from the Imagine Dragons manager asking them to support in London.

Since then, Saint PHNX have been able to hone their craft; they played across the country as festivals like Reading & Leeds and V Festival and embarked on their own headline tour in September 2017. In the short year that Saint PHNX has existed, many goals have already been achieved, and it’s their brotherly bond that’s spurred their whirlwind career forward.

Drawing comparisons with early Arctic Monkeys, Kings of Leon and Oasis, West Lothian quartet The Snuts have emerged as a word-of-mouth phenomenon throughout Scotland. In the process they’ve already passed a million streams at Spotify of their early demo recordings – all achieved organically without being promoted to radio, playlists or press.

The Snuts’ combination of sheer energy, natural charisma and a growing catalogue of indie anthems has already been rewarded with a cult following. Their first headline show at the Glasgow institution King Tut’s sold-out in a matter of hours, and was soon followed by subsequent sold-out dates in Edinburgh, Aberdeen, Dundee and Manchester.

With such homeland backing to their name, The Snuts are now looking to take their ragged rock ‘n’ roll manifesto to a wider audience. That process starts with the release of their first full single Seasons.

Kapil Seshasayee is a polymath, and a truly original talent, both as a songwriter and as a soundsmith, a one-man combination of Scott Walker, Mark Hollis, Arca, and Richard Dawson, creating something wholly unique. Combining electronica flourishes evoking FKA Twigs with Carnatic guitar ornamentations, stunning vocals and a penchant for unorthodox instrumentation such as the aquaphone, Kapil manages to be truly experimental yet still accessible.

A Sacred Bore is a concept album based around India’s caste system is a piercing examination of the abusive treatment towards lower caste Indians aiming to raise awareness of countless barbaric practices still prevalent among South Asian communities both in India and in the diaspora.

Building upon the narrative of prior singles The Agitprop, A Sacred Bore & Caustic Wit, Kapil expands on the issues, from the often-overlooked connections between the American far-right and upper-caste Indians to honour killings committed in the diaspora which continue to be under-reported.