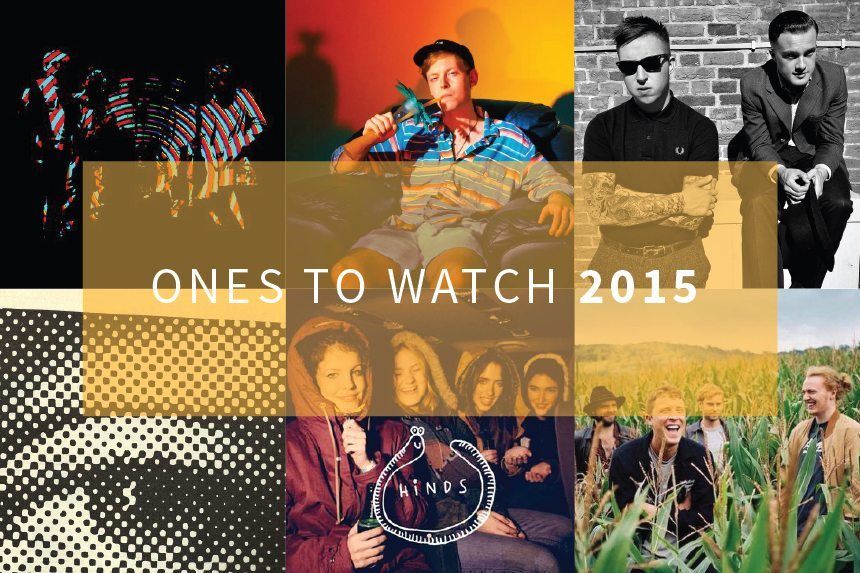 Neon Waltz: Having made waves on the underground circuit since their fairly recent formation and earning plaudits from prominent figures within Scotland’s ever expanding scene, Caithness’ Neon Waltz are set to find their stock rising in the coming year. Melding intricate keys with compelling guitar work to produce a unique, hazy sound, there have been a number of reports pertaining to an alleged courtship by several major labels. Having informed their fans that new tracks were at the demo stage in the latter part of the month, it would be reasonable to speculate that what comes out of their recent sessions will only help to boost their status and garner further acclaim.

HINDS (Formerly Deers): A girl quartet from Madrid, Deers play lo-fi 1960‘s influenced indie pop they’ve recorded around Europe on their mobile phones. A less moody Mazzy Star, the band have turned a duo into four for live shows, recently playing sold-out shows in Manchester and buzz-worthy performances in London and Glasgow. They will play SXSW Festival in 2015.

SLAVES: Any image that creeps into your head when you hear the phrase “Royal Tunbridge Wells” is everything that Slaves are not; garage punk embellished by percussive drive, lyrics marinated with satire and serrated guitar work. Their music is an embodiment of everything modern punk rock should stand for; it’s angst driven, dynamic and feels like taking a ride inside your gran’s old dual tub washing machine. This is a band tipped to explode in 2015 and their expected forthcoming record, which is yet to be named, is expected to receive a very warm welcome indeed; especially after recently signing to Virgin EMI.

Only Real: The brainchild of London’s Niall Galvin, Only Real is a renowned bedroom producer who has been lauded by critics since 2012. With the release of his long awaited debut album slated for early 2015, his psych infused dream pop with elements of hip hop  may be finding a much larger audience. The as yet untitled debut record will be released via Virgin/EMI.

Alvvays: This Canadian indie band released their eponymous debut this year to rave reviews and it would be presumable that they’ll be looking to build on such acclaim in 2015. Initially a solo project for vocalist Molly Rankin, the band’s jangly indie pop is reminiscent of Best Coast and Camera Obscura. Next year, they will embark on a UK Tour featuring a date at King Tuts on 24th January 2015. Their debut is available now via Transgressive.

Baby Strange: Glasgow’s own Baby Strange have made strides towards widespread recognition over the course of 2014, winning over audiences up and down the country with a series of stellar releases and intense live shows. With an ever evolving sound centring on infectious riffs and deep bass grooves, the three piece have a busy year ahead of them. After primarily focusing on EP’s, a full length album is scheduled to emerge from the hotly tipped three piece during the year. Set to embark upon a 5 date co-headline tour with Dolomite Minor followed by dates with rising punk outfit Slaves, only time will tell how much progress this productive band can make over the course of 2015.

Pronto Mama: Six piece indie pop outfit Pronto Mama have grown exponentially since forming in 2011, constantly honing their distinctive sound and consistently releasing excellent tracks. Incorporating a wide spectrum of influences ranging from Post Punk torchbearers such as Talking Heads to more contemporary examples such as Bombay Bicycle Club and Dutch Uncles, the band’s brazen melding of sounds and styles ensures an entertaining listen with every track. Set apart by their unmistakably Scottish inflection and their use of brass amongst rockier fare, 2015 may be the year that the industry sits up and takes notice of this immensely talented group.

White: Having seemingly appeared from nowhere, Glasgow based newcomers White are a prospect which has critics and fans alike awaiting their next move with eagerness. After releasing the funky, Talking Head’s influenced ‘Living Fiction’, the band went on to announce two dates in Glasgow which sold out in rapid fashion.  With the eyes of the music industry fixated upon them, 2015 will undoubtedly be an interesting year for this enigmatic collective.

Tijuana Bibles: After a great year supporting Alabama 3, The View and playing stages at festivals including the 12,000 capacity King Tuts tent at T in the Park, the band will be hitting the road for a large UK tour which will see them play over 16 towns and cities. More festival appearances and possible European shows to come in 2015.

Crash Club: Hailing from Glasgow and Kilwinning, electro rockers Crash Club have found themselves amassing a great deal of attention in recent months, indelibly imprinting themselves on the local scene with a slew of well attended gigs. Utilising their unique combination of industrial influenced synth work, acid house essence and raucous guitar parts, they have gained traction for their ingenuity and refusal to be confined to a single genre. Expect them to go from strength to strength in the coming year.

The Wild Curve: Following well received support slots with Prides and former Bloc Party frontman Kele Okerere, Glasgow based synth outfit are set to amass further attention in 2015. With an ethereal electro-pop sound that possesses an anthemic quality, the band are putting in the hours in the studio in order to provide fans with plenty of new material throughout next year.

Catholic Action: One of the more recent additions to Fuzzkill Record’s excellent stable of Glasgow based acts, Catholic Action hone a sound reminiscent of US bands such as The Strokes, Pavement and Girls. They are garnering a solid fanbase with every performance, their first ever headline tour of Scotland culminating in a gig at the Old Hairdressers and the release of a three song cassette, 2015 is primed to be a big year for them.

Say Lou Lou: Swedish electro duo and twin sisters, they have created a lot of attention around the world already ahead of their debut album due for release in February 2015. Tame Impala covers are among their Soundcloud tracks.

Palace: A prospect that many critics and fans are extremely excited about, London’s Palace have the music world clamouring for more after the release of last year’s Debut EP Lost In The Night. Combining indie sensibilities with the brooding nature of blues rock, the 4 piece have emerged onto the scene with a sound that is accomplished beyond their years. Expect further releases and a busy schedule from them in the coming year.

JIM VALENTINE: Sounding like a dirtier, more authentic Arctic Monkeys mixed with The Black Keys, Jim Valentine shot out of Glasgow in 2014. The rock ‘n’ roll four piece have garnished praise from a host of top music mouthpieces, and have been throwing there weight around south of the border too when they played London back in November. For anyone sick of the synth-pop that decorated last year, Jim Valentine could offer some guitar-led salvation. 2015 will be a big year for them, with label interest rising.

LILAC PIN: Producer-singer duo from Glasgow, Lilac Pin, have recently emerged through self-exposure on social media. With only two songs currently to their name the group are fresh and have gained an impressive amount of recognition in such a short space of time. Striving for a sound that is a juxtapose of sleek production and gritty effervescence can be difficult, and when done well it can breed a combination of excitement and wildspread hype throughout the music community; and it has been done extremely well.

Girl Band: Irish noisy band with dirty bass and loads of energy, Girl Band are the latest signing to Rough Trade Records. Joining the roster including the likes of Warpaint and Palma Violets, Girl Band are making waves with their delightfully abrasive post punk sound. Their Youtube views are exceeding 10,000 views and counting.

Backstage with The Temperance Movement at Lido, Berlin