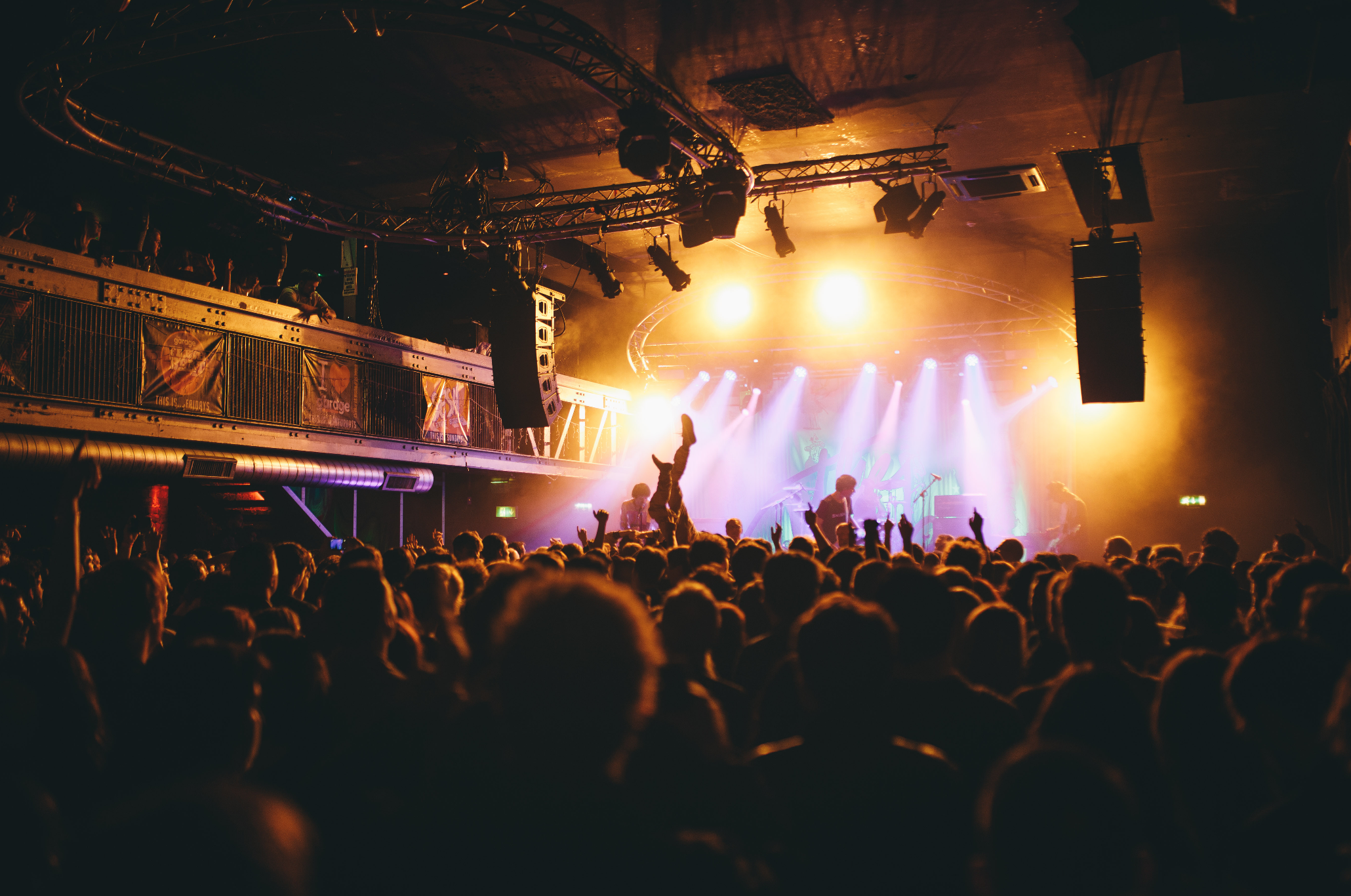 NEXT WEEK Tenement Trail returns for another incredible day of live music with the festival preparing to move to the East End of Glasgow for the very first time in its history. Taking over legendary venues like the Barrowlands, Saint Luke’s and popular spaces like BAaD and Creative East End, 2019 promises to be a milestone year for the festival which will be hosting its biggest line-up to date, headed up by the likes of Fatherson, Dream Wife, The Magic Gang, Squid and more.

Since it first began in 2013, Tenement Trail has established itself as Scotland’s biggest and best festival for music discovery. Over the years, we’ve seen some of the finest talent in the UK take on Trail, from established veterans to hotly tipped artists to brand new local bands, and the festival now boasts a highly impressive alumni of acts who have gone onto great success. Whether you’re looking to check out the next big thing or support local talent, Tenement Trail is definitely the place to be.

Ahead of the festival’s return, we take a look back at some of the artists who have left a lasting impression on the Trail and secured their place in the upper echelons of its rich and storied history.

Only a handful of people saw Lewis Capaldi play The Vic Bar on Sauchiehall Street back in 2016 but it’s a set that will always be remembered in the festival’s storied history. Since then, Capaldi has become one of the biggest popstars in the world and a social media phenomenon. With millions of streams on Spotify, his record-breaking debut album is currently the fastest selling debut of 2019 and with a huge army of diehard fans behind him, he played some of his biggest Scottish shows to date this summer on the TRNSMT Main Stage and at Edinburgh Summer Sessions. A far cry from the small Vic Bar on Sauchiehall Street, he is about to embark on a huge sold-out tour of the US in his next step towards global domination.

At the time of their Tenement Trail appearance in 2017, The Big Moon were one of the surprise nominees for that year’s Mercury Prize. The band attracted a massive crowd in The Garage where they performed one fizzing indie anthem after another from their critically acclaimed debut ‘Love in the 4th Dimension’ aswell as a memorable cover of ‘Total Eclipse of the Heart’. With appearances at Glastonbury, TRNSMT, a US tour and more under their belt, the four-piece have recently made a return with the announcement of their second record and are about to head out on tour with Pixies aswell as Bombay Bicycle Club next January.

Sam Fender made the journey up to Glasgow back in 2014 when Tenement Trail was only in its second year. One of the first acts of the day at Flat 0/1 with a modest 3.30pm slot, he then returned three years later to play the festival in 2017 in Nice N Sleazy when the number of venues had increased from five to ten. Fender’s rise to the forefront of the UK music scene has been nothing short of stratospheric since those early days. As the winner of last year’s coveted BRITs Critics Choice Award, the venues just keep getting bigger and bigger for the Geordie singer-songwriter who just last week unveiled his debut album to widespread critical acclaim. Five years on from his Tenement Trail debut, he returns to Glasgow this November for a sold-out show at the O2 Academy.

Before Yungblud became one of the most talked-about acts in the UK, he played a modestly attended set at Tenement Trail back in 2017 in Flat 0/1. The twenty year old Doncaster star, otherwise known as Dominic Harrison, has become a streaming sensation over the past 12 months with one of the most passionate fanbases in the UK. Showcasing a smorgasbord of styles from guitar-driven indie to trap-infused hip-hop, his astute lyrics have really struck a chord with a new generation of music fans and alongside his debut album, he has worked with the likes of Travis Barker, Halsey and penned tracks for the star-studded 13 Reasons Why soundtrack. Having already spread his appeal from the US to Australia, Yungblud’s world domination is underway.

Before they became the band we know and love today, The Ninth Wave appeared at Trail in the very formative stages of their career. Only Haydn Park-Patterson is recognisable from that line-up which played an early evening slot at Broadcast. A year later they returned to headline G2 and the rest is history. Now formed around the incredible songwriting partnership of Haydn and Millie Kidd, the duo have gone from strength to strength in recent years, joining the likes of The Blinders and YONAKA on tour, supporting Suede at the Kelvingrove Bandstand and playing shows as far as the United States. They released the first part of their debut album earlier this year with Part 2 to follow next month.

Since appearing at the very first Tenement Trail in March 2013, Baby Strange have established themselves as Glasgow’s premier punk outfit. After following up their debut album with their ‘Extended Play’ EP in 2017 and joining the likes of Jamie T on tour, the trio have gone from strength to strength since those early days and they return to the festival this year as one of the line-ups big hitters. Still known to incite mass mayhem at their thrilling live shows, Trail 2019 could be an opportunity to see some new material from Baby Strange as they enter another new chapter.

After seizing the attention of fans and tastemakers alike with their soaring, euphoric brand of indie-rock from the very formative stages of their career, Neon Waltz were one of the main attractions of Tenement Trail 2014. Since then they have cultivated an impressive following all over the UK, taking their stirring sound to venues and festivals far beyond their hometown Caithness. With a critically acclaimed album, EP and a string of singles behind them, they have also supported the likes of Noel Gallagher, DMA’s and more.

Since first appearing at Tenement Trail in 2016, LUCIA has developed into one of the country’s most promising artists. With the help of Sony’s Sweet Jane Recordings, the frontwoman and her band have released two acclaimed EPs and a string of impressive singles while a relentless touring schedule has taken her to the US and all over the UK festival circuit. With more new music on the horizon after a lengthy period recording in the United States, we’re excited to see what comes next for this fast-rising star.

2015 Tenement Trail favourites The Amazons have certainly made an impact on the UK music scene since they took the teatime slot at Nice n Sleazys. Undoubtedly a highlight of the 2015 festival, The Amazons’ rise to the top was easy to foresee. Since then, they have toured relentlessly, released the highest charting debut rock album since Royal Blood, played the TRNSMT Main Stage, secured regular Radio 1 airplay and filled venues up and down the country with their anthemic rock-driven sound.

From her very earliest displays in and around Glasgow, it was clear that Be Charlotte was destined for big things. The rising pop star from Dundee secured her place in Tenement Trail history with two enthralling displays at the festival in both 2015 and 2016 where she seized the hearts and minds of fans and critics alike. In fact, those early shows proved so memorable that she soon penned a worldwide record deal with Sony/Colombia. Currently residing in Berlin, Germany, there’s plenty more to come from Be Charlotte who continues to inspire a new generation of music fans.

Over one year, Rascalton went from the opening slot of Tenement Trail to grabbing the coveted midnight show at Flat 0/1. Their show in 2017 lives on as one the most riotous sets that Tenement Trail has ever seen, testament to their seemingly unstoppable rise to the top of Scotland’s punk scene. Two years on the four-piece have won over crowds down south with their unwavering punk-driven indie sound and their relentless touring schedule shows no signs of stopping since signing with the renowned 13 Artists agency.

Anyone who has seen Anteros live will attest to their infectious allure; their hooky synth-laden pop grooves and animated live shows. Bringing their danceable indie tunes to the festival in 2017 as part of a particularly star-studded line-up, it’s fair to say that the band left Glasgow with a whole new army of fans after their set in the G2. Since then, the band have lived up to their initial promise with a triumphant debut album aswell as big gigs at TRNSMT, SXSW, Reading & Leeds and festivals all over Europe.

Edinburgh’s Vistas have certainly captured the imagination of the streaming generation with their exuberant, fiercely infectious indie pop anthems. With over 15 million streams to their name, it was easy to foresee their rapid ascendancy thanks to massive high-tempo, hook-laden hits like ‘Eighteen’, ‘Calm’ and ‘Like an American’. The past couple of years have seen them picked up by Primary Talent International and they have secured massive support slots with the likes of The Wombats, Fatherson, Circa Waves and more. Winning fans all over the UK, 2019 has already seen them headline a sold out Saint Luke’s in Glasgow, a flurry of big festivals down south including Reading & Leeds and they are about to embark on a mammoth UK tour.

The meteoric rise of The Dunts has been impossible to ignore over the last 12 months and Tenement TV have been there from the start. After tearing up King Tut’s in 2017, they returned to Trail last year to grab the coveted midnight slot at the same legendary venue and it was no surprise to see queues of fans winding all the way down the street to see the four-piece. Chaos ensued as the band delivered one of the most memorable sets of the day. Since then, The Dunts have played TRNSMT, Reading & Leeds, SXSW and teamed up X-Ray Touring while they have the tantalising prospect of a sold-out gig at The Garage at the end of the year.

Declan Welsh is the only artist who has taken on Trail three years in a row, twice as a solo artist and a third time in 2017 with his band the Decadent West. Known for his astute social commentary and melodic punk tunes, the festival has seen him go from humble acoustic beginnings to the formidable frontman he is today. With a debut album now on the way, Welsh and his outfit were personally selected by Billy Bragg to play the Left Field stage at Glastonbury this year while they have also secured the support of BBC Introducing and Jack Saunders over the past couple of months with regular Radio 1 airplay throughout the day and night. Now under the stewardship of Modern Sky UK, those small solo slots in Nice N Sleazys are a thing of the past this ambitious outfit.