IN just a few weeks, Tenement Trail will make an almighty return to Glasgow’s East End, taking over multiple venues including the Barrowlands, Saint Luke’s, BAaD and more.

Boasting a mouth-watering line-up that features some of the best up and coming acts around, the festival has become renowned for its riotous party atmosphere and enthusiastic crowds.

One band who that all too well are Gallus – the Glasgow rockers played the last two Trails in 2018 and 2019, inciting chaos on both occasions with their ferocious live energy. The last one was a particularly triumphant occasion as they took BAaD to a whole new level – the pictures still tell a thousand words. 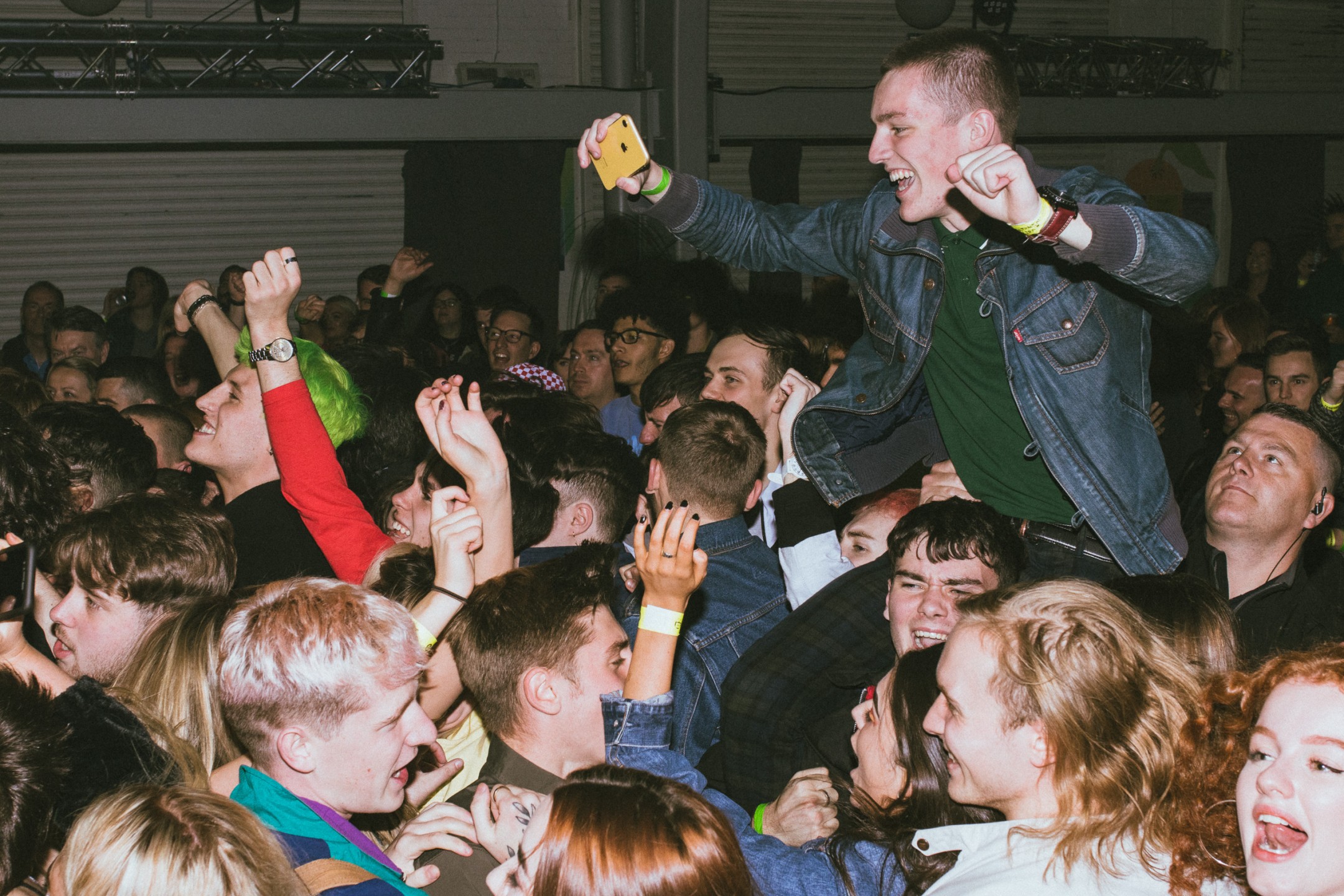 It was only right then that when we were curating the line-up for this year’s big comeback, Gallus were one of the bands top of our list. The band have gone from strength to strength since their last Trail show, signing a record deal with Marshall Records and crafting easily their most dynamic and enthralling material to date.

So, with the band all set to return for the hat-trick, we caught up with Barry Dolan and Craig Duris to hear about Trail, new material, their progression and more.

Barry starts “This will be the third year in a row we’ve done it. I love Tenement Trail, I went the year before we played it as well. The idea of the festival is so close to my heart – it’s such a good idea – multiple venues with up and coming bands. It’s my type of festival if I was to pick one to go to.”

“For them to keep asking us to come is amazing, and now hopefully we’ll be playing a bigger stage on the line up.”

Having attended as a band and punters over the years, there are so many top memories to look back on. Barry reflects on one of the rowdiest gigs the festival has ever seen – the infamous midnight slot from Rascalton. “One of my favourite gigs of all time was Rascalton at Flat 0/1 in terms of music and venue. To be involved with something close to that is fucking cool.”

He adds “In 2019 we shared a stage with Drenge which was special. To be in the same place, and to be seen as an equal as them – Tenement Trail gave us that moment and that’s so special.”

As a band, that early evening slot in 2019 was hard to beat – a memorable year for many reasons as it was the first edition to move from Sauchiehall Street to the East End.

“Our last set was particularly good” Barry admits. “It was brilliant in the east end, it took it miles above what it was – even when you didn’t think it could get better.”

Unfortunately for bassist Craig Duris, he missed out. He says “I never played it in 2019 as I was on a family holiday. I was in Orlando, Florida while you were playing. I was in a shopping centre, picking out a new shoes and saw pictures and I kept thinking ‘fuck this’” he laughs. “I’m looking forward to seeing in the east end though”. 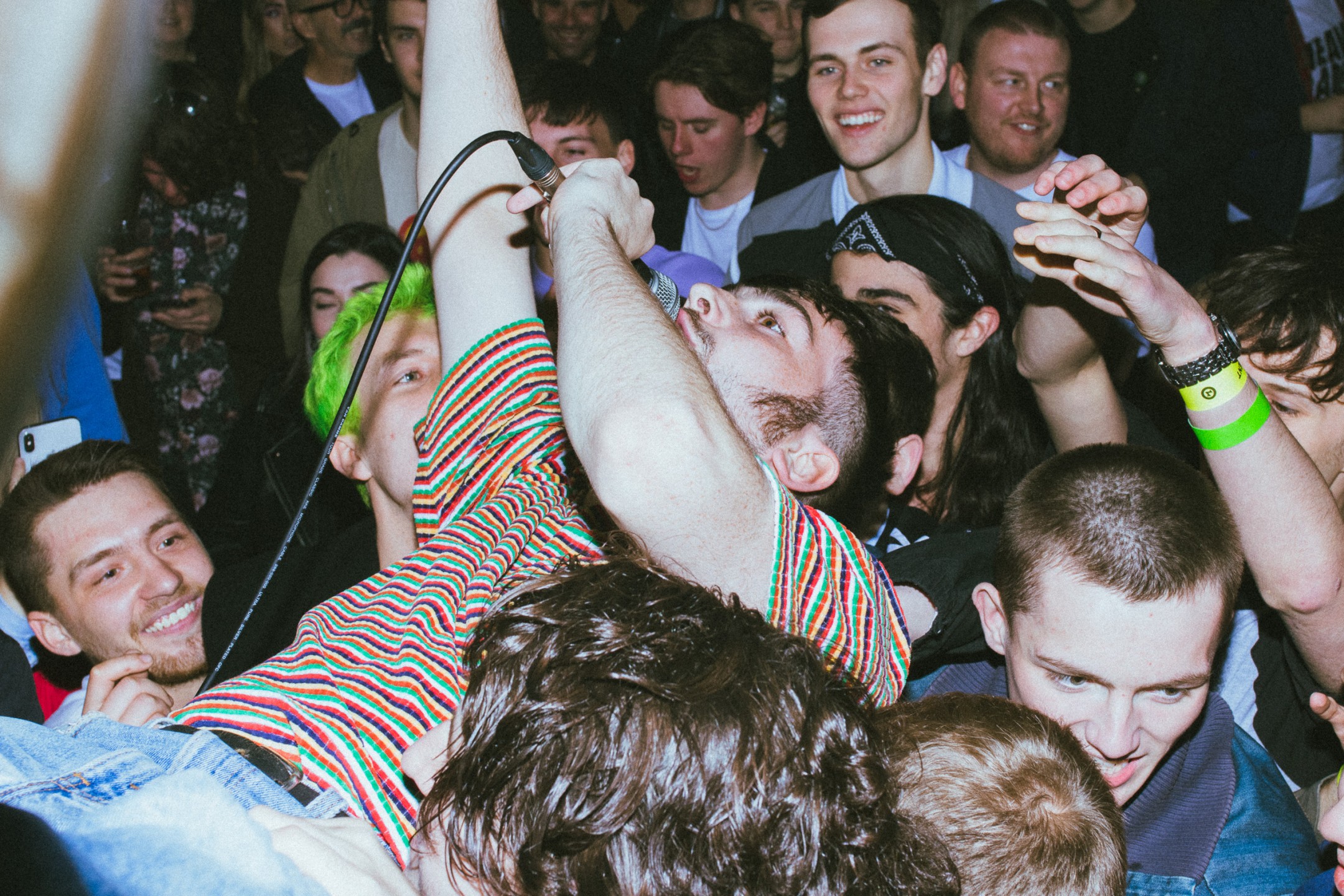 Renowned for bringing together different music communities, Trail has always had a very collective ethos. Barry says “When you get into the music scene, you naturally make loads of friends with bands. Trail is a collective thing – we all just go together, cutting about with people you’ve made pals with, and your’e treated as artists as well as pals.”

Gallus are also a great example of the progression that can happen at Trail – from playing the small, intimate venues to some of the biggest rooms in Glasgow. Over the years, the festival has seen the likes of Lewis Capaldi, Sam Fender, Yungblud, Baby Strange and more appear in the formative stages of their careers.

Craig says “You get to go and see bands you never thought of or heard before. A good example with Trail is The Murder Capital – they played Priory in 2018 and then they’ve gone onto sell out QMU, so it’s cool to see that progression.”

As to who they’ll be checking out, there’s plenty of names that fire out. The likes of Washington, Spyres, Uninvited are all given a mention, as well as Dead Pony and The Big Day – who also happen to feature two of Barry’s former flatmates.

“I want it to be on record that I’m NOT buzzin’ for Dead Pony – I hope they have a terrible time” he quips. “This couldn’t be more directed at Blair Crichton, I would never ever live with him by the way…”

“They’re actually the best band in the country” he adds. “You’ve also got The Big Day – another band who I had the pleasure of living with in their formative days. They’re gonna surprise everyone with how good their tunes are.”

As for their own set, can fans expect any new material? “You can expect a lot of new material … or the announcement of a lot of it… “, Barry says.

“When we play shows in Scotland, we do want to play some older stuff… but we’ll also have more out.”

Judging from their recent social media activity, the band have had a busy time tucked away in the studio since signing to Marshall Records. We’ve already heard the likes of ‘Fruitflies’ and ‘Are You Finished’ – and both have highlighted a band well and truly in their element. There’s no denying that the signing was a massive moment – one that has provided them with many brilliant opportunities this year alone.

Barry reflects on this, saying “We’ve found our team and struck our luck big time. It was a risk for us as we took on the first offer to get signed, sometimes that’s not the right choice, but it was right for us. They’ve been so good to us and given us amazing experiences like playing Great Escape and going to America.”

Craig adds: “They’re very supportive of us – they’re hyped which gets us hyped. We gel really well, and we couldn’t ask for a better team.’

At the behest of the label, the band have therefore been working away on new material, and if this month’s ‘Are You Finished’ is anything to go by – they’re in the form of their lives. An exhilarating listen that catapults into a storming hook of a chorus, it’s filled with incisive guitars, dynamic rhythms and pop-punk influences – matching their catchy hooks with thought-provoking lyrics.

And yes, there’s plenty more to come. Craig says “We’ve been recording in Castle of Doom in Glasgow, and the Marshall Studio in Milton Keynes. We’ve always worked with Chris Marshall and Johnny Madden so we’ve got to know them, it’s a familiar and easy process. At first, it was uncharted territory going down south but the guys down there were amazing and very welcoming.” 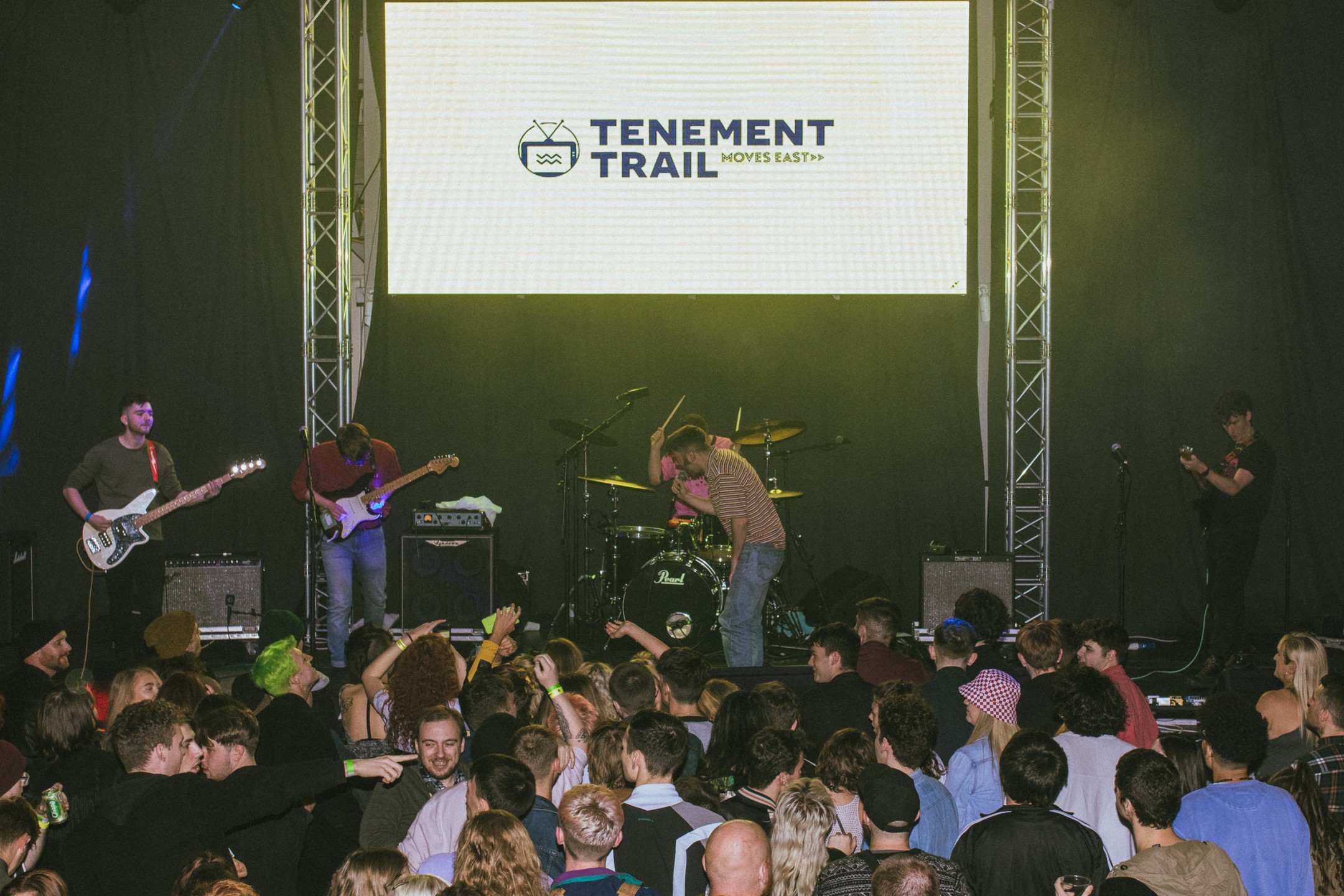 There’s no denying that the five-piece have massively progressed as songwriters since their early days. The ferocious and exuberant energy is still there but it feels more focused and dynamic. What’s more they’ve kept that passionate streak – whatever they turn their hand to, you get the impression that they really mean it.

Craig says. “I think we’re more musically interesting – we’ve find our footing in terms of sound which makes writing a lot easier. Of course, there’s some challenges cause you always want to make it fresh.”

Along with their progression as musicians, the band have also developed into formidable live performers. Taking each new venue in their stride, they’ve played some of their biggest shows to date this year – including SXSW, The Great Escape, a support slot with Biffy Clyro, their first shows in Europe, and of course, they have Tenement Trail later in the year. And no matter how big the crowds are, they treat each and every gig with the same urgency and vitality.

Barry says: “We’ve always had the ethos that if folk go to our shows and have fun, we’ve had a good show – it doesn’t matter about any technicalities. We’ve always thought that, and we’ve got better, in terms of providing entertainment.”

Barry adds “As long as people leave with a smile on their face – our show has been a success. And I think with that attitude, it was always gonna get better as we got better as musicians. We are now getting these good shows – and folk are still having a good time. At Biffy, there was 6,000 people.”

We’re absolutely certain that their show at Tenement Trail will be another one to remember. And with more new music on the horizon, there’s plenty to keep an eye out for.

We ask where they see in Gallus in five years’ time. Barry says with a wry smile “I’m gonna be in panto! They’re all musically talented, I’m from an acting background and I dunno if I’ll like them in five years.”

Craig Duris: “And I’ll be a manager in Spoons!”

More seriously, he says “I’d love to be on the road, seeing new places, whether its Europe or the UK – it’s still really fucking cool to connect with new people.”

Barry poignantly concludes “If Gallus is still in my life by the time I sadly leave yous, I’ll be very fucking happy.”

Get tickets for TENEMENT TRAIL HERE.