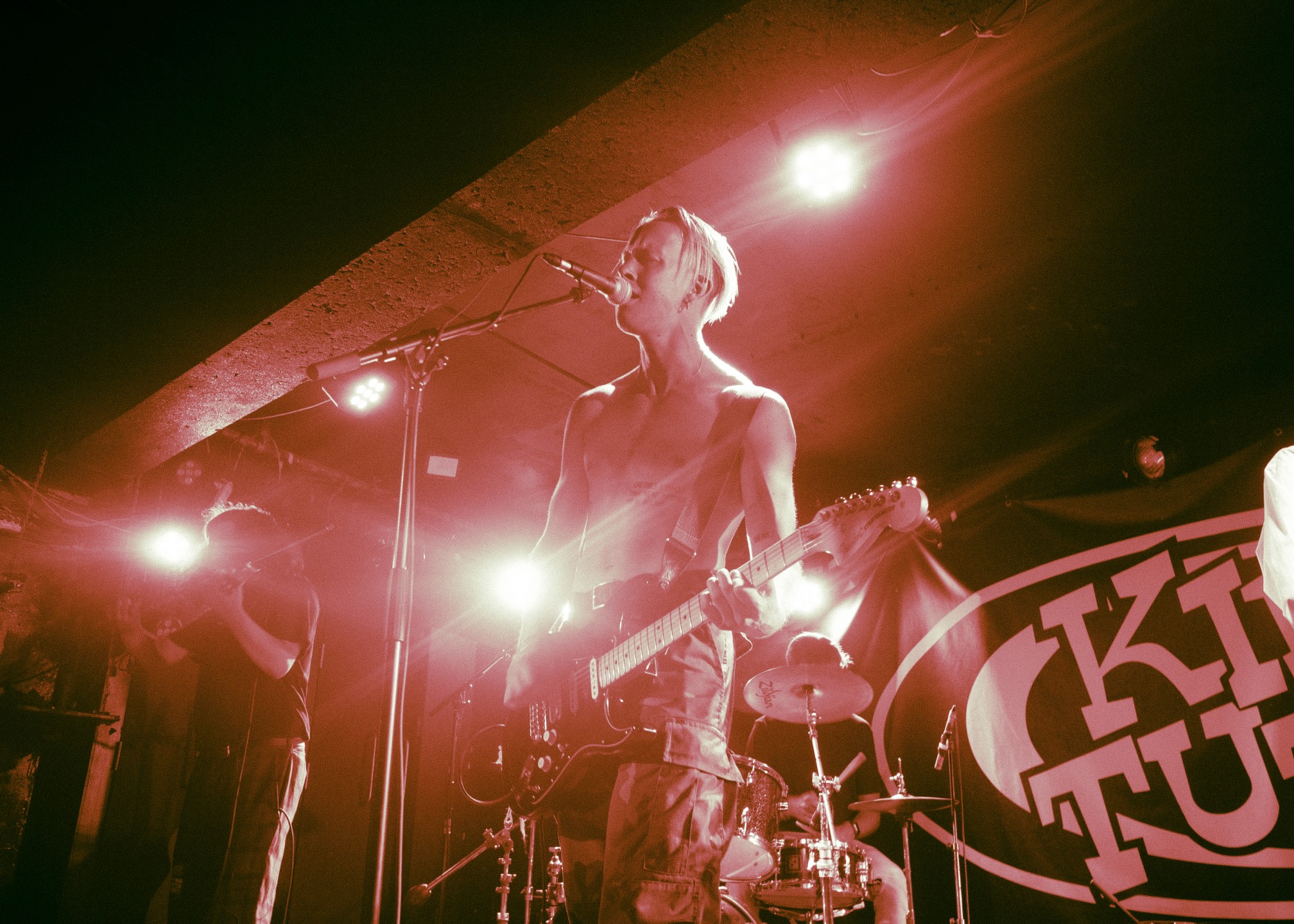 THIS is Last Boy: the new moniker of Haydn Park-Patterson, also known as founder and co-frontman of The Ninth Wave.

When the band announced their split earlier this year, citing a desire to take a break and explore personal projects, Patterson was already looking ahead – keen to start afresh and take his songwriting down a different direction.

His initial ideas started to form in the wake of completing The Ninth Wave’s second album, and what emerged became too enticing not to pursue – driven entirely by instinct and a desire to push himself creatively.

From there, Last Boy was born and a unique sound started to form, one that, on first listen, feels warmly familiar yet distinctly personal – his honest lyrics and emotional hooks imbued with Scottish traditional influences and a lighter outlook. This all comes together on his debut EP ‘Coffin Fit’ which arrived last week in physical-only format – its quick release indicative of his prolific writing and recording over the last few months. Such was the level of expectation that pre-orders sold out almost instantly, while the launch also coincided with a near sold-out show at King Tuts on Sunday night. 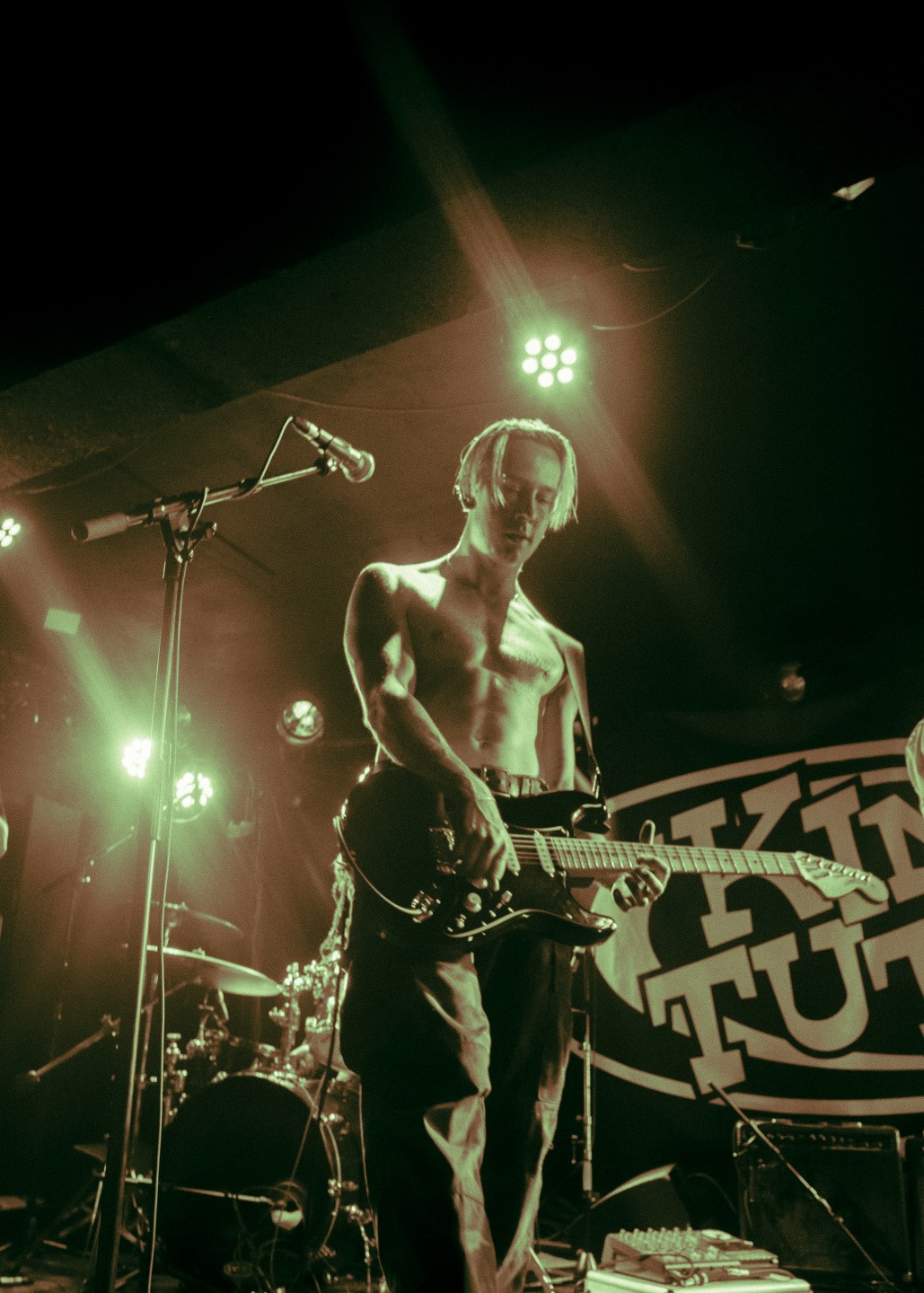 So, on the morning after the show, we caught up with the newly minted Last Boy to hear all about the origins of the project, the new EP and more.

“It started after we finished recording the last Ninth Wave album.  We started writing new stuff and I was writing songs that I kept thinking more and more didn’t sound or feel like The Ninth Wave”.

“We never felt we had to write a song a certain way and we always wrote the way we wanted, but when I started writing these tunes, I couldn’t imagine The Ninth Wave doing them. I just kept thinking – ‘this needs fiddle’” he explains.

“My brain was going in that direction the more I was writing – that it was going to be something new.”

After spending over a decade at the helm of The Ninth Wave, a band he formed from a very young age with his family, the main appeal of the project was to reignite the fun of songwriting and follow his own creative instincts.

He says: “The main thing for me is doing it the way I want to do it and have fun with it. The EP I’ve just put out, the idea of it being a physical-only thing, I could never have imagined being able to do that a couple of years ago.

“I’m just doing what feels natural, having fun with it, and doing interesting stuff that I’ve always wanted to do and never really been able to.”

Having spent such a long time in a band dynamic, he reflects on this shift to solo act: “I’ve always enjoyed recording with other people, but with these songs especially, I’ve written all the parts – drum, guitar, bass, vocals. I’ve always wanted to be a drummer in a band and now I’m getting to be a drummer on my own songs. I’m not a control freak, but I definitely have those tendencies, and now I can just make it like I want it to sound.”

One big part of this is re-embracing his most formative influences – that being his love for Scottish traditional music. There’s a real Celtic thread running through ‘Coffin Fit’ – the use of fiddle on ‘whyd’yenever’ for example elevates the track, the lighter melodies complementing his blunt, yearning lyrics. Elsewhere ‘Second Thought Morning’ captures that kind of moody, emotional atmosphere that Ninth Wave often excelled in, with the fiddle taking the track to a new level – the emphatic melody line injecting a thunderbolt of energy into the distorted chorus.

Speaking about this traditional influence seeping through, he says “I’ve always listened to a bunch of different music, but me and my dad, more so when I was younger, always used to play traditional music together. I’ve not been able to do anything with that for a really long time, so it’s really nice to bring some of that to people because I love traditional music and it’s such a huge part of who I am.”

The EP was recorded and produced with Andy Monaghan of Frightened Rabbit (he’s also worked with the likes of Lewis McLaughlin and Lizzie Reid). Haydn says “He’s fucking class – I think we were in for a total of five days and just battered it out. I like working with Andy because he doesn’t like spending too much time on things – if it sounds good, just record it. That’s my favourite way of writing.” 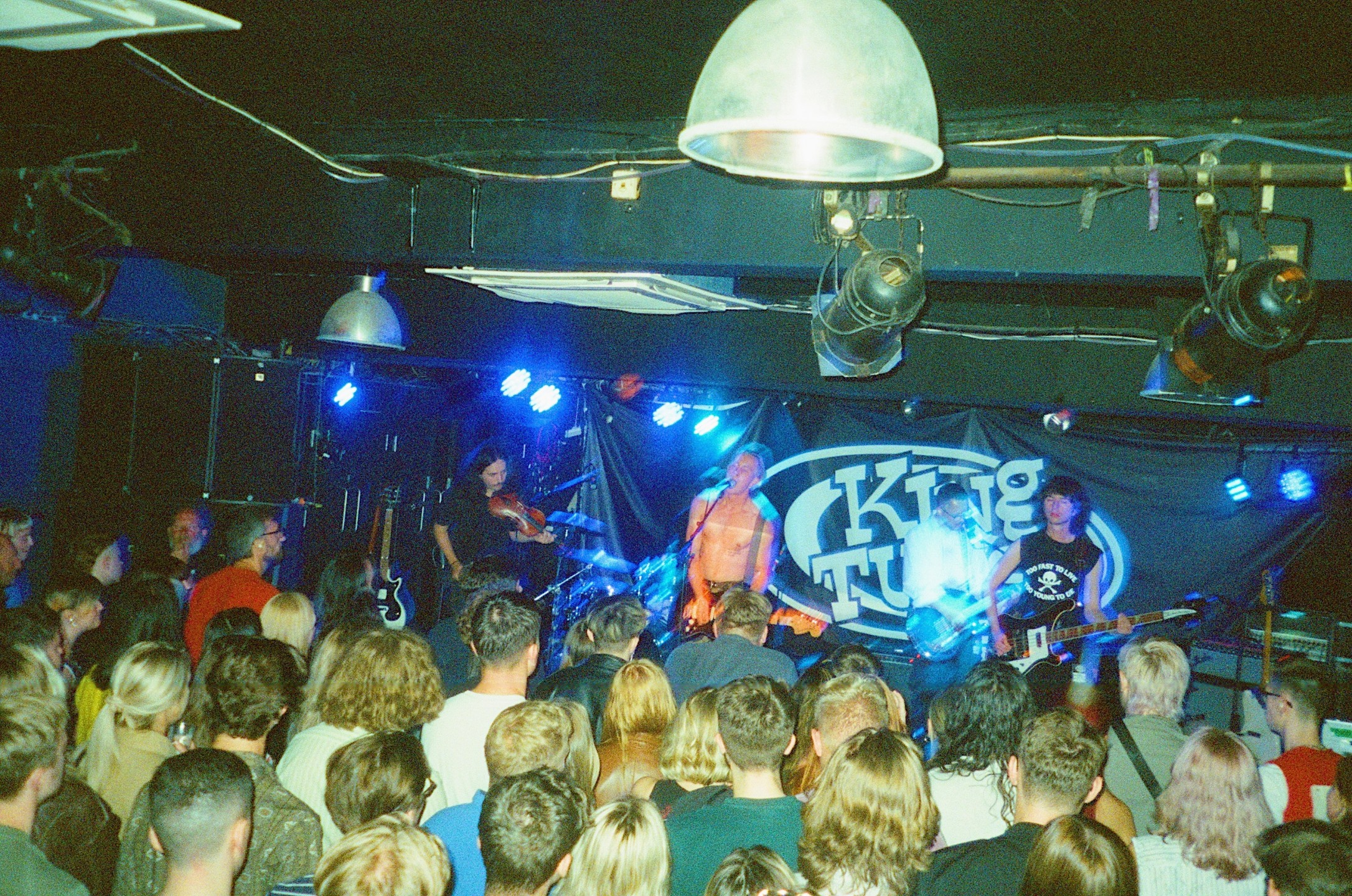 With that in mind, there’s a real rawness to the collection – both in terms of lyrics and production. The Ninth Wave’s trademark style is there – there’s those emotional hooks that tug on the heart; the blunt, yearning lyrics and shades of that dour, moody atmosphere they always excelled in. However, Last Boy is a chance for Haydn to realign his sonic world – whether it’s through the sheer enjoyment and catharsis of following his own creative instincts, or expanding his influences, the music feels lighter and imbued with a slight sense of optimism.

He says “It’s got a bit more lightness to it, maybe not as dark as stuff written in the past. When I was starting to write them, I was just having fun with it and not feeling confined into a certain style of writing – there’s a lot of real-life things looked at bluntly, but a bit less seriously.”

“I wanted it to sound like me, but I’m enjoying it all coming together in this different way – in a way that people haven’t heard me do before.”

‘Young Pups’ is our entry point – anthemic and high energy. Opening in balladic fashion, it lifts off with the heavy, guitar-driven chorus, while ‘whyd’yenever’ is cathartic and affirming, as well as a reminder of the singer’s lyrical precision. “With no room for hope, you’ll grow white with worry / This life is just a sick joke that plays out in a hurry”.

‘Second Thought Morning’ is another triumph – his vocals strong and defiant; the drums forceful and the brilliant instantly gratifying fiddle adding drama to the whole piece. Title track ‘Coffin Fit’ and ‘Death Of The Summer’ bring the pace down – the first brutally blunt and Frightened Rabbit-esque, and the latter delivered wistfully over a raw piano melody. 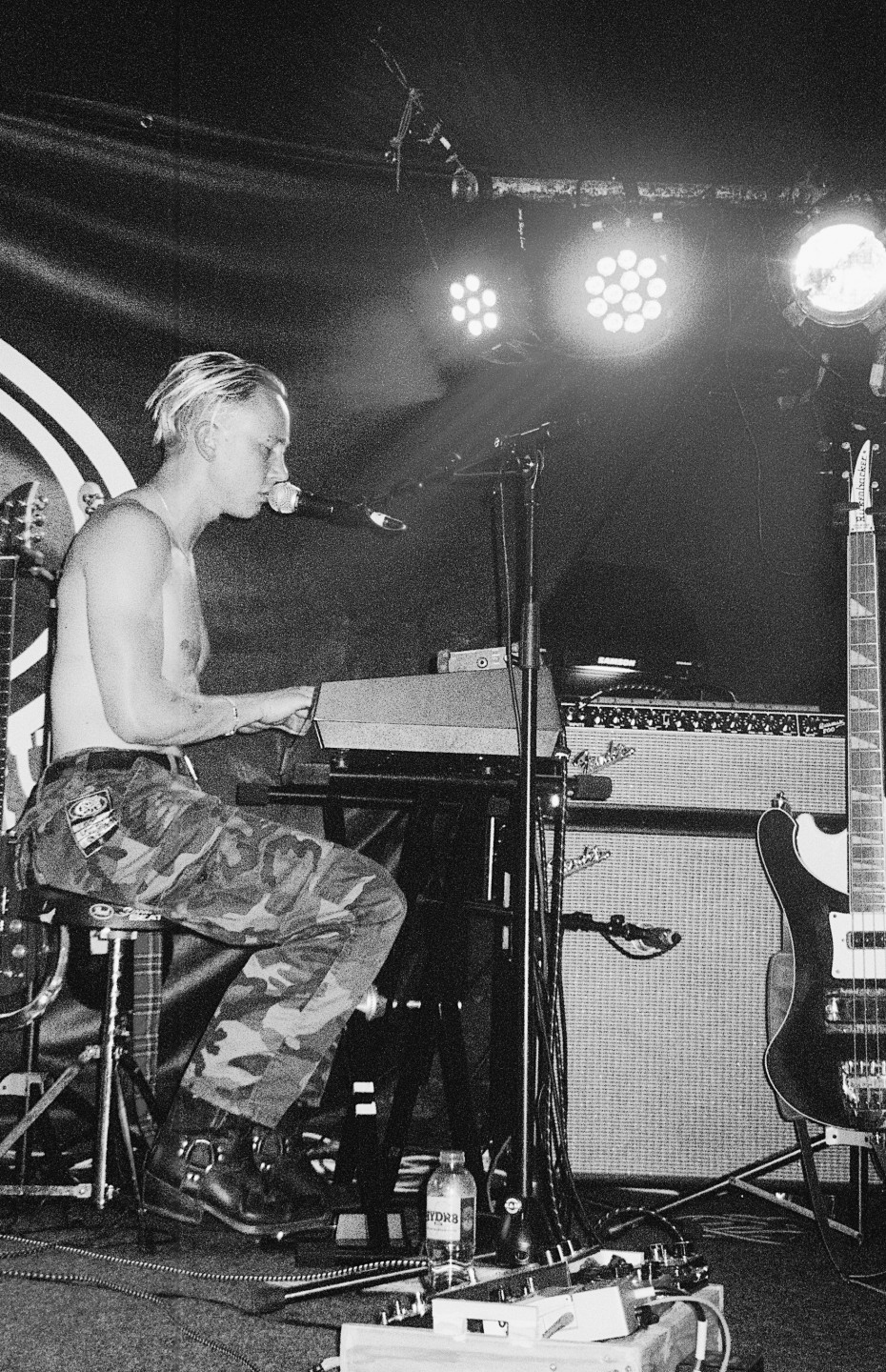 Only available in physical format, the EP was available to pre-order via his mailing list, with remaining copies sold at his show on King Tut’s on Sunday. Delivered with an 18 age-rating stamp and some striking photographs on the cover, he discusses the DIY process of putting it together: “Last week I finally got them all sent away. I was getting second-hand DVDs from charity shops and taking out all the covers and DVDs in them. My dad printed off a pile of covers and booklets and I was inserting them into every single case.”

“It took such a long time – last week was consumed by burning CDs on my old laptop, folding these booklets, writing every address – it was worth when I saw the massive pile of DVD cases. People are starting to get them now which is exciting.”

Those who were avid followers of The Ninth Wave will know that they had developed quite a closeknit following over the years, and Haydn has continued to channel this community DIY spirit through his work as Last Boy. From the beginning, he has used a mailing list to send snippets of new material to listeners, his debut headline show at McChuills was only available to those who signed up, while his new EP is only out in physical format – it’s a rare thing in an industry that’s become so inextricably tied to the world of social media and online streaming.

He explains “That’s one of the main things I wanted to have with this. With Ninth Wave, we had a nice community of people who were into the music and it was always nice to chat to people. I wanted to keep that but also expand it a little bit. Having the mailing list is a much more direct way of getting in contact with people who like the music, instead of slapping a post on Instagram which nobody sees because the algorithm is fucked.”

“I like doing stuff like that – the start of a project or band, I’ve realised, getting it all going yourself, is one of the funnest parts for me. Because you do all this stuff on your own, you can really get a connection with people which I guess is one of my favourite things about it.”

“Recently I wrote a letter to a bunch of people – people put in their address and I sent them out a letter and there was a song in it. I love doing it like that.”

With this strong sense of identity behind it, the project is clearly already connecting with many people. On Sunday, he played to a jam-packed King Tuts (‘It was quite the evening’, he says), joined by an assortment of friends and musicians, including the brilliant Euan McLaughlin on fiddle. And there’s still much more to come.

“There’s a couple of gigs later this month that have not been announced yet, and I’m just going to get more recording out. I’m really enjoying getting the songs down, the process of it is quite quick which I really like as I can do as much as I want – it’s coming together nicely” he says.

Photos provided by Lucia Fairfull and Ronan Park from the King Tut’s show on 28th August. 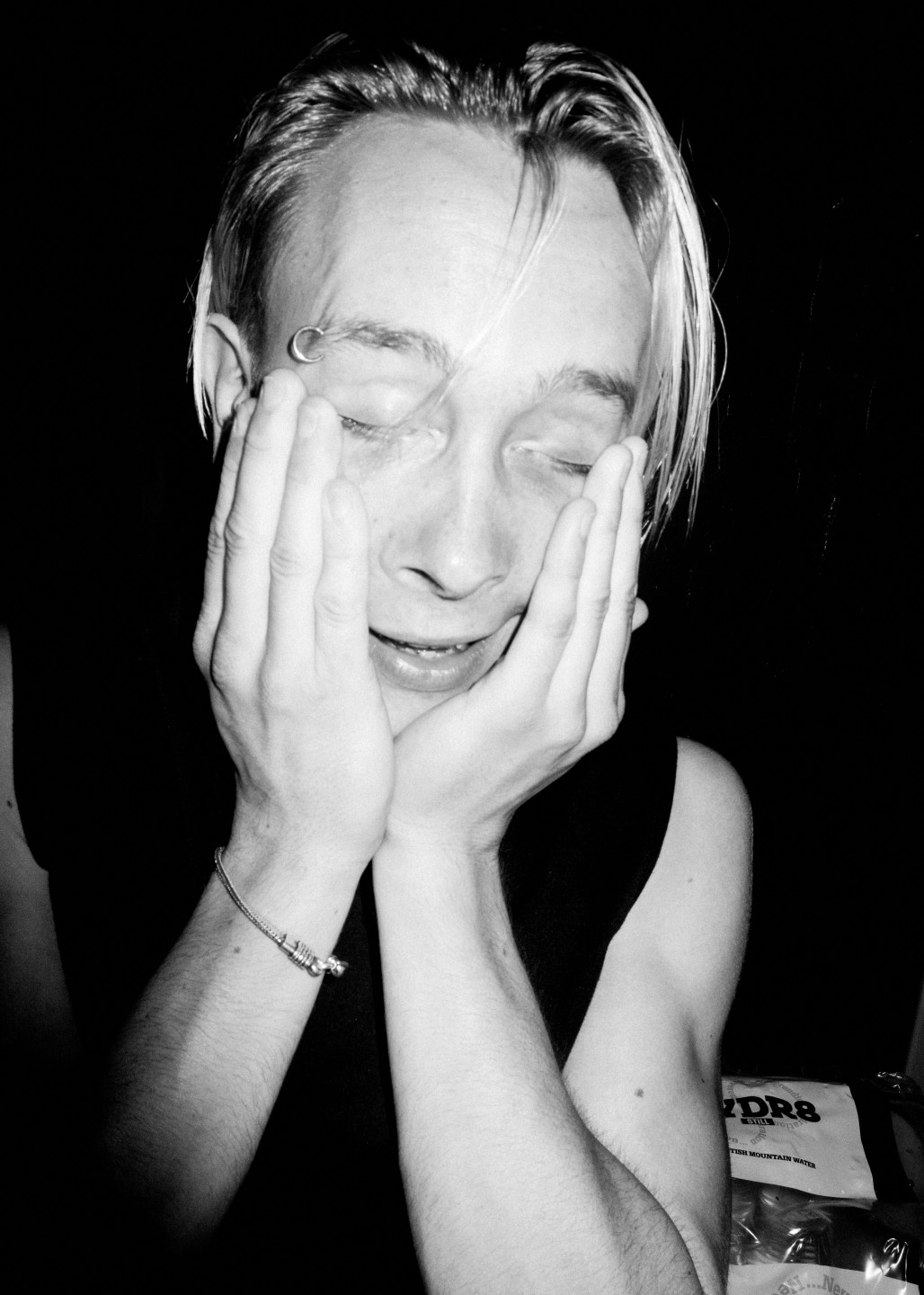