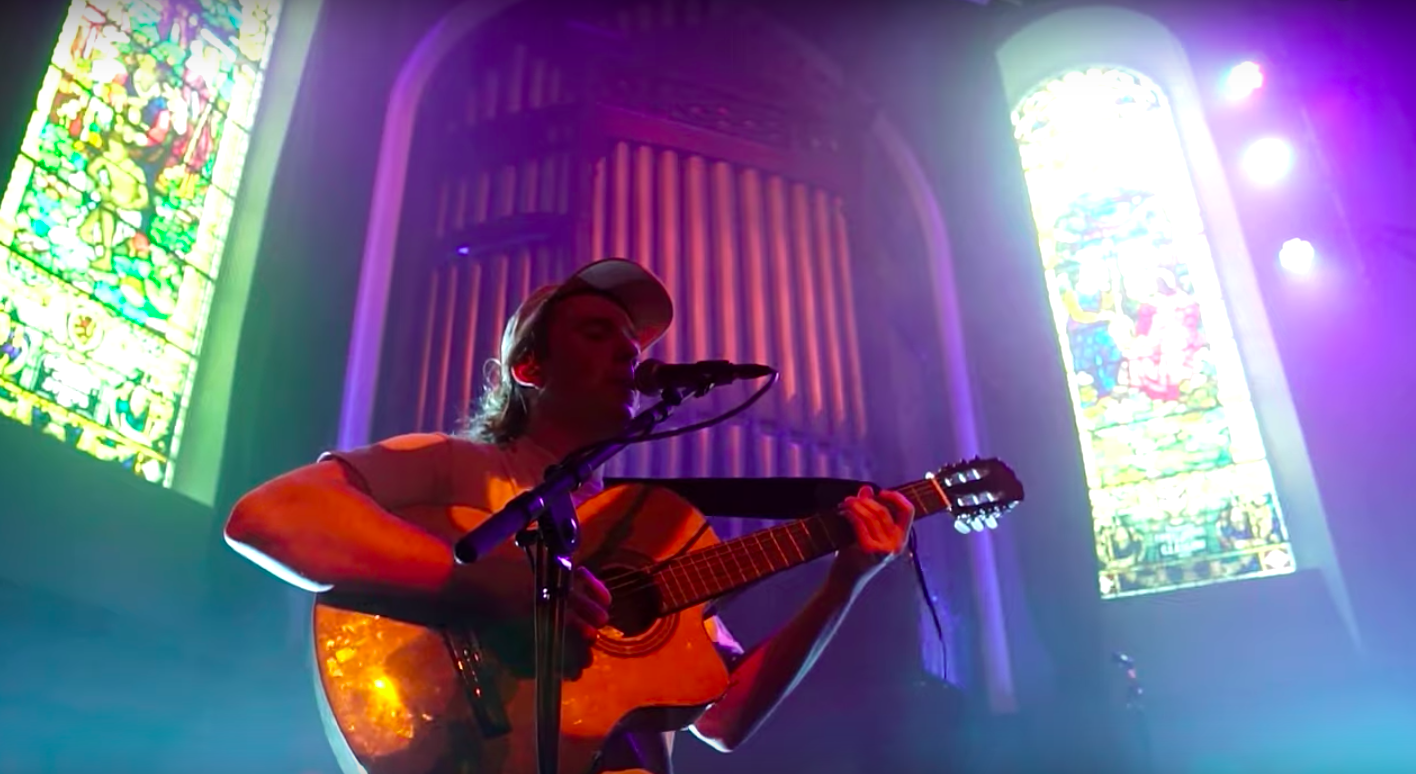 IT is only 24 hours until Tenement Trail makes the big move east as thousands of music fans prepare to descend on the Barrowlands, Saint Luke’s and more for one incredible day of live music. Featuring one of its most exciting lineups to date, over 60 acts will perform at the multi-venue festival this year, ranging from plucky newcomers that exude ambition with every release to visitors from down south that are ready to stake their claim as future worldbeaters.

Over the years, the festival has brought some of the UK’s biggest buzz acts to Glasgow, artists that have been tipped by fans and industry tastemakers alike to go onto great success such as Lewis Capaldi, Sam Fender, The Big Moon, Easy Life, Anteros, Yungblud and more. It’s a tradition that is all set to continue this weekend with yet another varied and eclectic bill that promises to reveal even more hidden treasures.

Ahead of the big day tomorrow, we’ve provided a rundown of all the acts who are causing a buzz in the UK music industry right now, bands who have been tipped for great success by those in the know and who we believe will make their presence truly felt at Tenement Trail 2019. Discover something new, jump on the hype train early and see what all the fuss is about.

What more can be said about Squid other than that they are one of the most exciting live acts in the UK right now. The band’s wildly innovative brand of post-punk is fascinating and unpredictable in equal measure, underpinned by a hard steady groove and topped with lyrics that are important and surreal. Their intricate style was displayed on their recent ‘Town Centre’ EP which features sprawling shape-shifter ‘The Cleaner’ and utterly vital ‘Match Bet’. Just when you think Squid have settled themselves into a groove and aligned themselves to a sound, they pull out all the stops, twisting and turning from post-punk to funk to Talking Heads, Television and more.

Oscar Lang is currently signed to Dirty Hit, home of The 1975, Pale Waves, The Japanese House, Wolf Alice and more. Looking to follow in the footsteps of the label’s highly impressive roster, Oscar Lang is already carving out a reputation as a songwriter and producer pushing bedroom pop to exciting new heights. Previously described as a “budding Brian Wilson for Gen Z”, he has already worked on a string of acclaimed releases from friends and fellow up and comers such as Girl in Red and Beabadoobee. Expect some swooning and psychedelic indie-pop to fall in love with.

With the honour of opening up the Barrowlands main stage on Saturday, Liverpool’s Zuzu will bring some breezy, hook-laden polished pop tunes to Tenement Trail 2019. Hailed by The Guardian as “the future of Liverpool pop”, she excels in catchy guitar music that shifts from introspective and reflective to full of swagger and attitude. An electrifying presence on stage, her writing is familiar, open and welcoming with plenty of singalong choruses thrown in for good measure.

After spending the summer touring round the UK festival circuit, playing big slots at the likes of TRNSMT, Reading & Leeds and more, Sea Girls will put all their experience to the test this weekend when they top the bill at one of Glasgow’s most popular venues Saint Luke’s. Already a Radio 1 mainstay with massive tunes like ‘Damage Done’ and ‘Closer’, they are a band who are reviving the spirit of noughties indie with confidence, charisma and heaps of ambition. And with a string of indie rock bangers to their name, they are sure to go down a storm.

For fans of Radiohead, Alt-J and Biffy Clyro, Another Sky craft the kind of atmospheric indie-rock that will make you stop in your tracks. Anchored by lead singer Catrin Vincent’s incredible vocals, heavenly and ethereal one minute to deeply poignant the next, the band’s grandious, intricate soundscapes are something to behold. Picking through important themes of loneliness, anxiety and finding purpose in a broken world, the band are known for their captivating, deftly nuanced and highly varied sets.

This five-piece from the Netherlands craft infectious and playful indie-pop that careens wildly across genre boundaries. From giddy garage rock to danceable beats, the band’s debut album ‘Fool for the Vibes’ is full of idiosyncrasies and irrepressibly fun tunes, underlining the strength and vitality of their indie rock songwriting. Their live show is equally captivating, frenetic and electrifying in all the right ways, and they are sure to leave Glasgow with a lot more fans when they headline Barrowlands 2.

From the moment they arrived back in 2017, VanIves have had us in awe with their engrossing fusion of lavishly produced ambient R&B and heartrending acoustic balladry. Revealing extraordinary new depths to their sublime, multi-faceted sound with each release, the supremely talented duo have been drip-feeding us new material throughout 2019, taking their unique sound into intriguing and rewarding new territories each and every time. Often carried by a stirring mix of anguish and ecstasy, Roan Ballantine’s production work is a feat in itself but it is brought to an entirely new level when brought together with Stuart Ramage’s breathtaking vocal range. Prepare to be blown away by this duo

Leading an exciting new generation of artists coming out of Dundee, St.Martiins are a band who have really come into their own in recent months. Comprised of Katie Lynch and Mark Johnston, the pair have put out an incredible run of singles over the past year, inviting listeners into their enchanting sonic world via dreamy vocals, wavy guitars, intricate rhythms and a distinctively breezy production style. Crafting woozy alt-pop to fall in love with, the band have a new EP coming out on LAB Records and were recently announced as one of the first acts to take part in the eagerly anticipated YALA! Records tour.

Named as one of Kerrang’s Hottest Bands of 2019, Aberdeen quartet Cold Years are Scotland’s answer to The Gaslight Anthem. Bringing punk, Americana and blues-based rock together in one striking and hard-hitting concoction, the band followed up their 2018 EP ‘Northern Blue’ with the heartfelt ‘Breathe’ earlier this year, said to be the first cut from their eagerly anticipated debut album. Expect meaty riffs, pounding drums and heartfelt vocal work from one of Scotland’s brightest prospects.

No stranger to the live circuit in Glasgow, Zoe Graham is known for charming crowds with her mesmerising and at times achingly poignant dream-folk creations. With an impressive attention to detail and natural musicianship, the singer-songwriter has been known to perform alongside a band or to flesh out her instrumentation using loop pedals. With notable shows at TRNSMT, Wide Days and more already under her belt, Graham has been camped out in the studio of late and Tenement Trail could be an opportunity to see something new from the rising star.

They may not have released a single track yet but Perth’s Avaera have already piqued enough interest to secure a coveted spot in The Great Escape’s First Fifty. Performing at the festival’s special showcase event in November with some of the UK’s finest emerging talent, they will also perform at the world-famous Brighton event next May. Sharing the same management as IDLES, they are said to possess a luscious, polished sound that blends alternative rock and pop, big guitar hooks, intricate bass lines and powerful vocals. For fans of Biffy Clyro and The Killers, Tenement Trail will be the perfect opportunity to see what they’re all about.

Having already secured support slots with the likes of Miles Kane, The Snuts and Sea Girls to name a few, this indie-rock trio from Wirral in Merseyside are proof that rock and rool is still very much alive. Combining elements of grunge, psych and blues, they are reminiscent of early Kings of Leon or Wolf Alice’s heavier material, recently recording a BBC Introducing session at the famed Maida Vale studios. Pricking up ears across the land, they are a band destined for big things and they are sure to blow the Trail crowds away with their talent, authenticity and raw energy this weekend.

Charged with playing the very last set of Tenement Trail 2019 at The Priory from 1.30am til closing time, Aberdeen born DJ duo Testpress are already making a name for themselves on the UK dance circuit with their massive house bangers. Inspired by trap and hip-hop, the duo have a Wednesday residency at the legendary Sub Club and have gained support from Djs of the highest calibre such as Skream and Patrick Topping.

Everything you need to know about TENEMENT TRAIL 2019