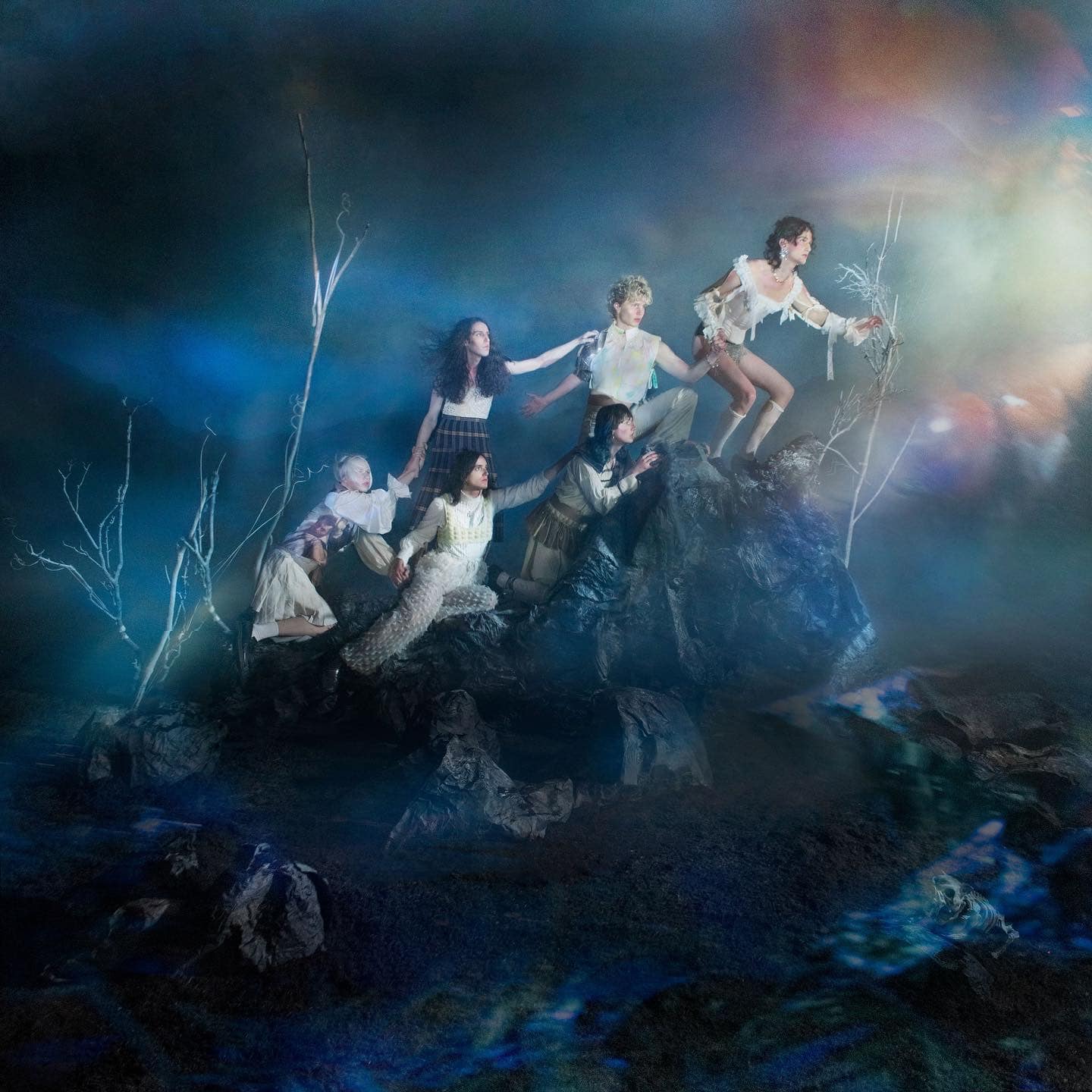 JUST a couple of weeks ago, Walt Disco were enthralling crowds at SXSW in Texas, taking their fun, eccentric and glitzy glam-rock show to brand-new audiences and storming one of the biggest new music stages in the world. Since those shows, the band have gained widespread acclaim from all corners of the music press for their decadent avant pop wiles and magnetic performances – and their profile looks set to get grow even further over the next few months.

This week though, they return to the city where it all started for an eagerly anticipated headline show at Saint Luke’s, Glasgow – a gig that is taking place tonight, just a couple of days before the release of their debut album ‘Unlearning’.

So, ahead of one of the most memorable weeks in the world of Walt Disco, we caught up with the band to hear everything about the album, their inspirations and ambitions.

“We’re incredibly excited, especially now that some people are hearing the album and enjoying it, it’s so encouraging!” the say.

Speaking about the recording process, they said “We started recording when Scotland was first placed into lockdown, we ordered a set of speakers and got to work in Dave’s bedroom. We did most of the recording and producing ourselves, but collaborated with producers including Thomas McNeice, BOBBIE, Tom Stafford, John Baillie Jr and Jessica Winter both over zoom and some limited studio time. The album was finished in the summer of 2021, it’s all a bit of a blur though!”

A largely independent effort, ‘Unlearning’ is a bold, ambitious, daring and wildly creative debut album. From the very outset, it lives up to its promise, playing entirely by its own rules with a heady mix of influences ranging from Sparks, 80s smash pop hitters like Duran Duran, Scottish post-punk heroes like The Associates and even modern hyperpop. In fact, it speaks volumes of Walt Disco’s execution that ‘Unlearning’ bears the strength and complexity of a later career offering – never mind a debut.

It’s the perfect arc from a band who have been tearing up the rulebooks from the moment they burst onto our radar back in 2018 – from the eighties-indebted charm of their early releases to their bolder, more experimental ‘Young, Hard and Handsome’ EP. With each release they have decisively pushed the parameters of their sound and vision, gradually becoming one of the most identifiable and iconic acts in the country.

Speaking about this sonic evolution, they say “our sound tends to evolve according to what we’re all feeling/listening to at the time. The sound of the album is a marriage of our earlier classic pop and new romantic influences, with more modern forms of pop and industrial music. We were listening to a lot of SOPHIE, Young Fathers and Brian Eno at the time. We still incorporated influence from our Scottish heroes such as The Associates and Simple Minds.”

With that sonic exploration, the band use their entrancing, sprawling soundscapes to interrogate universal themes of love, heartbreak and identity. At the heart of ‘Unlearning’, and beneath all of its experimentation, lies a very emotional core – one rooted in self-discovery, queer identity and acceptance.

They say “It’s a blend of personal themes, escapism, and yearning for new experiences.

“With the situation the world was in at the time, we were left with an abundance of time for contemplation and reflection on things. Not just personally but in regards to the band as well. This is reflected in a lot of the fantastical and yearning imagery in the album. We were living out fantasies through the music we were making.”

With greater confidence, they’ve been able to delve deeper than ever before while also pull off numerous risks to achieve their vision.

Of course, the timing of ‘Unlearning’ couldn’t be better for Walt Disco. Having taken the time to grow into their own sonic skin, it arrives at a time when the buzz around them is at an all-time high.

Speaking about the experience of creating their debut album, they say “When you start a band the idea of performing live music is extremely exciting, but the idea of creating a body of work this size feels totally fantastical. It’s surreal and exciting to be at that point. The challenging aspect is usually the timing aspect of it, we’re really thankful we had the time to consider not only the music but the world we’ve built around the album, and didn’t have to worry about pouring countless hours into those snare sounds.”

And that’s exactly what they’ve done – Walt Disco have created a world that transcends just the music they create. It informs their visuals and fashion, their theatrical live shows and fanbase – all inspired by the message that it is never too late to be completely and unapologetically yourself.

Speaking about their visuals, they say “A lot of what leads us to create our visuals is subconscious, even the clothes we’re wearing whilst working on a song can affect how we visualise it. A lot of our recent songs focus on particular themes or narratives, and this has had a big effect on our visuals.”

As for the upcoming show at Saint Luke’s, fans have a lot to be excited about. Already renowned for their high-energy, theatrical performances, they’ll be raising the bar once again.

” You can expect a lot of new material from the album which we’ve beefed up to fit our special brand of rock show! On top of that, expect countless nip slips and general tomfoolery.

As for the future? “We’ve been plenty busy working on many exciting new things, both musical and visual. In due time all shall be clear, but for now we’re contractually obligated to only say ‘big things coming’.”

Get your tickets for Saint Luke’s here.