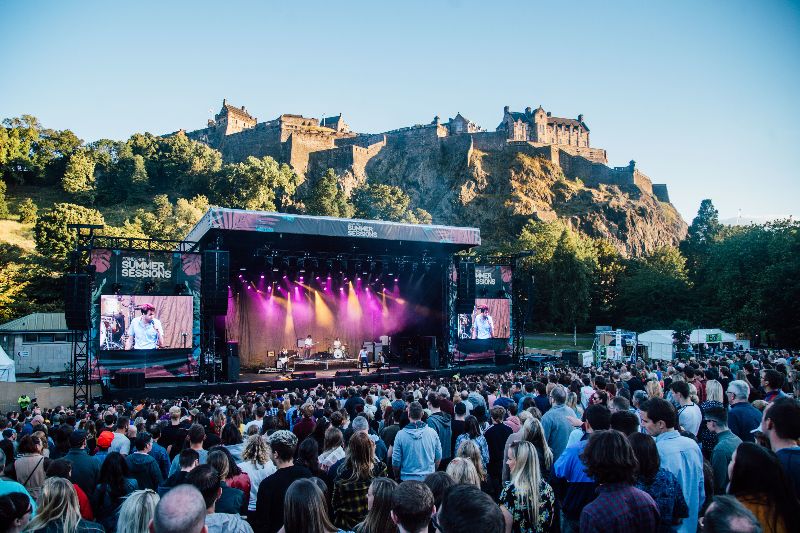 TONIGHT marks the return of Summer Sessions in Princes Street Gardens which is back in Scotland’s capital city for a series of massive shows in one of the country’s most iconic gig locations. After a hugely successful inaugural edition in 2018, the concert series returns the Ross Bandstand in Edinburgh this summer with another star-studded line-up of homegrown heroes, trail-blazing female talent and exciting breakthrough artists.

Taking place from the 7th-18th August in the midst of the world-famous Edinburgh Festival and set to welcome nearly 20,000 music fans to the city, the run of concerts will feature headline performances from Florence & the Machine, Primal Scream, Chvrches, Lewis Capaldi, Madness, James and Courteeners aswell as a strong line-up of support artists.

So as Florence & the Machine prepares to kick things off tonight, here’s our top picks for the week.

Making a much-welcomed return to Scotland, Florence + The Machine is playing not one but two consecutive shows on 7th and 8th August. 2018 was a remarkable year for Florence Welch, whose fourth album ‘High As Hope’ was released to wide acclaim in what felt like a career-defining moment. She received her third Mercury Prize nomination for the record and more recently has been shortlisted for both an ‘Album Of The Year’ and ‘British Female Solo Artist’ in this years’ BRITS nominations. Summer Sessions Princes Known for her spectacular live shows and boundless onstage energy, she is sure to provide an unforgettable opening show tonight.

Florence & the Machine will be supported by the exciting new project from Rebecca Taylor, also known as Self Esteem. Previously known as one half of folk duo Slow Club, she unveiled her debut solo album this year to widespread critical acclaim and is back in Scotland after a slot at Belladrum over the weekend.

Primal Scream will take to the Princes Street Gardens stage on 10th August, their first Scottish date since the iconic V+A opening in Dundee last summer.  Primal Scream released the original studio recordings from Memphis of the tracks that eventually became their 1994 album ‘Give Out But Don’t Give Up’ in October last year. They teamed up with legendary producer Tom Dowd and the Muscle Shoals rhythm section of David Hood (bass) and Roger Hawkins (drums) at Ardent Studios in Memphis, the resulting recordings from those classic sessions showcase the more country soul, rock’n’roll side to a band who continue to surprise.

Primal Scream will be supported by none other than Johnny Marr this Saturday. With a career quite like no other, the former Smiths guitarist is a bonafide musical genius, creating a guitar sound that today, is still one of the most iconic in British history. Johnny Marr has reaped the rewards of a hugely successful solo career playing huge shows in Scotland, most recently a massive show at the famous Glasgow Barrowlands. Johnny Marr has also worked with a plethora of incredible artists in his time, joining bands including Modest Mouse and The Cribs.

Synth-pop maestros CHVRCHES will make their debut at Summer Sessions Princes Street Gardens on 11th August, almost five years since their last performance in the capital. After a special homecoming performance at TRNSMT Festival in their hometown last summer and an incredible show at The SSE Hydro this month, the Glasgow trio fronted by Lauren Mayberry, will return to Edinburgh after an incredible seven years of huge tunes and big shows around the world. Their debut album in 2013 proved CHVRCHES were turning the Scottish music scene on its head, blending Lauren’s mesmerising vocals with catchy indie-pop hooks and lyrics. 2018 saw the band release their third album ‘Love Is Dead’ showcasing hits like ‘Get Out’ and ‘My Enemy’, strengthening their roots as leaders of Glasgow, and Scotland’s, music community. Their Edinburgh Summer Sessions date is a unique chance to catch CHVRCHES in an intimate setting, with the beautiful backdrop of the City’s most iconic landmark.

WE WERE PROMISED JETPACKS

Support will come in the shape of Scottish indie-rock stalwarts We Were Promised Jetpacks and goth-pop duo The Ninth Wave. Having made their presence known on both sides of the Atlantic, the band who have gained comparisons to Frightened Rabbit and The Twilight Sad have grown a tremendous cult following in recent years with four stellar albums to their name. Returning to their hometown for Summer Sessions Princes Street Gardens, they are celebrating the tenth anniversary of their debut album ‘These Four Walls’ this year with a special edition of the record and a massive transatlantic tour.

The Ninth Wave have established themselves as one of the nation’s most promising emerging artists. Having made their presence known as far as Austin, Texas, Los Angeles and New York, the band have enjoyed a relentless touring schedule over the past 12 months with acclaimed appearances at The Great Escape and support slots with CHVRCHES, YONAKA, whenyoung and more. Carefully crafting a stunning, doom-laden post-punk sound full of towering 80s infused synths and hard-hitting rhythms, the duo unveiled the first half of their debut album ‘Infancy’ back in April to critical acclaim with the second half due out later this year.

The man of the moment, Lewis Capaldi will headline Edinburgh Summer Sessions on Wednesday 14th August, making his Summer Sessions festival debut and a much-welcomed return to Scottish soil after a whirlwind year for the young Bathgate-born singer. Currently top of the Official UK Charts with his mammoth heart-breaking tune ‘Someone You Loved’, Lewis Capaldi has gone from strength to strength since first appearing at Glasgow’s TRNSMT Festival back in 2017. Now a mainstay on BBC Radio 1 and with an upcoming UK headline tour which sold out in a matter of seconds, Lewis Capaldi is taking the music scene by storm with his down to earth, hilarious take on his new life as a celebrity. Whether it’s his nomination for the BRITs Critics’ Choice Award, an appearance on Top of the Pops, scoring a Number One single, famous fans from Calvin Harris to Bastille or even having Peter Capaldi star in his music videos, Lewis Capaldi hasn’t forgotten where he came from and his debut headline show at Edinburgh Summer Sessions festival is sure to be a real highlight of 2019’s summer music calendar.

Ayrshire trio Fatherson on supporting duties ahead of James on 15th August. Having plied their trade in some of Glasgow’s most intimate venues since they first burst onto the scene with ‘I am an Island’ in 2014, their third studio album ‘Sum Of All Your Parts’ came out earlier this year and firmly established their rise to the forefront of Scottish rock. They take on the role as festival headliners later this year when they take on Tenement Trail at the top of the bill.

Described as “One of the best live British bands of the moment” by Clash Music, the Courteeners play a sold out Summer Sessions Princes Street Gardens on 16th August following on from their amazing performance at TRNSMT Festival in 2018. More than a decade of tours, epic anthems and five studio albums reached its peak for Courteeners in summer 2017 as the band played the biggest show of their career – a huge sold-out 50,000 capacity at Manchester’s Emirates Old Trafford. The band’s alternately jangly and bombastic brand of indie guitar rock lends itself to festival stages around the world. With big tunes from the debut record including ‘Not Nineteen Forever’ and ‘What Took You So Long?’ carved out as pure guitar–rock classics, Courteeners’ appearance at Edinburgh Summer Sessions will be sure to bring hero singalongs from that first guitar hook.

Old pals from Bathgate, The Snuts are one of the few West Lothian acts who will support Lewis Capaldi next week at the Ross Bandstand.  With a strong word-of-mouth following that has steadily started growing far beyond the reaches of their hometown, their rise to the forefront of the Scottish music scene continues to gain momentum and following a massive 12 months and a triumphant slot on the Main Stage at TRNSMT last month, the band are sure to receive a rapturous response from the Edinburgh crowd.

Forming an integral part of Scotland’s thriving DIY punk scene, Glasgow’s Heavy Rapids channel the sounds of the acts at the forefront of punk’s resurgence including IDLES and Fontaines DC, with scorching guitar leads and formidable vocals. Their live shows have become a ferocious display of unity and unbridled chaos in recent months and having made their presence known south of the border at the likes of The Great Escape, Y Not and more, they will be raring to go in front of the fervent Courteeners crowd.