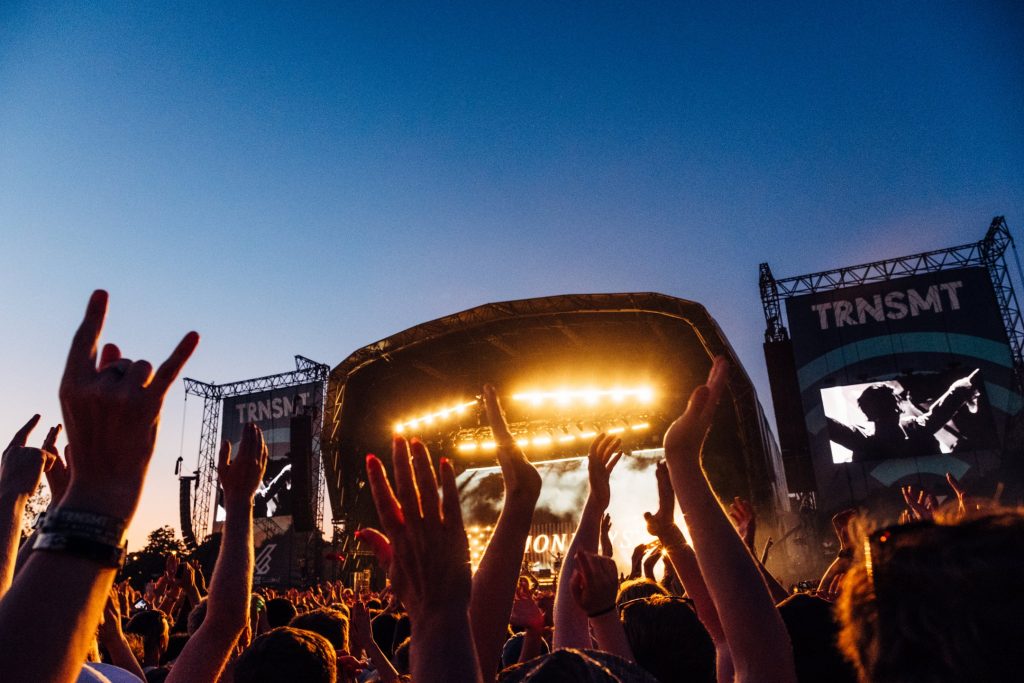 TOMORROW marks the return of Scotland’s biggest music festival as TRNSMT prepares to open its gates for the third time at Glasgow Green. Set to attract 160,000 music fans over the 12th-14th July, some of the hottest acts on the planet will descend on the park once again for three days of incredible live music. This year’s festival will feature one of its most eclectic lineups to date – from Main Stage heavyweights Stormzy, Catfish & the Bottlemen, Gerry Cinnamon and Snow Patrol to BRIT nominees Years & Years, Jess Glynne and Mabel to exciting breakthrough artists like The Snuts, The Dunts, whenyoung and more.

As the excitement continues to mount for the weekend, here’s a rundown of our top picks of the festival and what acts you should check out across the weekend.

Stormzy recently made history when he became the first British black male solo artist to headline Glastonbury. It was a performance that was described as “historic” and a “glorious victory lap for black British culture” and he has since been called “the defining British artist of a generation”. Known for his incredible stage present and uncompromising live show, his headline slot on the Friday night of TRNSMT is frankly unmissable and is sure to go down as a truly iconic moment in the festival’s history.

Glasgow-based Ghanaian artist Kobi Onyame was nominated for the Scottish Album of the Year award for last year’s ‘Gold’. Having already supported the likes of Kanye West and Nas, the album saw ‘him enter fresh new territory by creating an intriguing bridge between his Ghanaian heritage and his hip hip/grime leanings. Using lots of West African sounds and rhythms and known for his defiant lyrical commentary, his rich sonic palette and arresting stage presence are not to be missed at TRNSMT 2019.

A member of Tenement Trail’s impressive alumni, The Big Moon return to Glasgow to take on the King Tut’s stage on Friday afternoon. Their critically acclaimed debut album ‘Love in the 4th Dimension’ was nominated for the coveted Mercury Prize in 2017 and they have been nestled away in the US over the past few months recording new material for their next full-length effort. Full of earworm hooks, guitar-driven anthems and smooth harmonies, their set will come packed with summery festival anthems aplenty.

Citing influences such as Amy Winehouse, Lianne La Havas and Lauryn Hill, Cara Rose has a voice that will undoubtedly stop you in your tracks. No stranger to the local live circuit, her direct, passionate and insightful lyrics traverse topics of young love, humanity and political discourse in completely transfixing fashion. Brimming with natural talent and charisma, she is an artist destined for success.

Scarlett Randle beat off hundreds of competitors to win the 2018 Tenement Trail competition and she has had us utterly transfixed ever since. With a charismatic stage presence and songwriting flair, her experimental approach to her craft has proved wholly captivating and she has shown an ability to effortlessly oscillate between minimalist folk and striking pop, her compelling creations anchored by her deeply honest and heartfelt lyricism.

Catfish & the Bottlemen will bring Saturday’s festivities to a thunderous finale. The band, who cut their teeth in some of Glasgow’s most intimate venues back in the very early stages of their career, have struck a chord with a new generation of indie fans and return to the festival with a brand new album ‘The Balance’ in tow.

One of the most decorated artists on the lineup with 24 major music awards to his name, Richard Ashcroft will bring swagger and rock & roll to the TRNSMT Main Stage with a massive early evening slot on the Main Stage. Dating back to The Verve’s heyday, the formidable frontman has a wide and far-reaching catalogue to delve into full of absolute classics like ‘Bittersweet Symphony’ and ‘The Drugs Don’t Work’.

With the news that they have recently signed to Parlophone Records, The Snuts from Bathgate look set to follow in their fellow native Lewis Capaldi’s footsteps with mainstream success just around the corner. With a strong word-of-mouth following that has steadily started growing far beyond the reaches of their hometown, their rise to the forefront of the Scottish music scene continues to gain momentum and following a massive 12 months, the band return to the festival this year after a triumphant display in 2018 to make their Main Stage debut.

BRITS Critics Choice Award winner Sam Fender is widely regarded as one of the UK’s most exciting young talents. The Geordie singer-songwriter appeared on the King Tut’s Stage just last year but has since been catapulted into the limelight thanks to regular Radio 1 airplay and a string of incredible singles. Known for his deeply soulful brogue and rousing, socially conscious indie anthems that often tackle difficult subjects, Sam Fender is undoubtedly one of the most important songwriters in the UK at the moment and his performance on the Main Stage at TRNSMT this year will prove exactly that.

BBC Sound of 2018 nominee Jade Bird has enjoyed a massive breakthrough year that has taken her all over the world. Influenced by the likes of Crosby, Stills and Nash and Alanis Morrissette, her deeply personal style of songwriting has struck a chord with music fans all over the UK and beyond and her edgy, unsparing country-charred rock tunes have proved brilliantly accessible. And after been tipped by tastemakers and music fans alike to enjoy massive success, her self-titled debut album certainly fortified all of that early promise and reinforced her as confident voice in the UK scene

Band of the moment Fontaines DC are sure to attract a healthy crowd to their set at the King Tut’s stage on Saturday evening. One of the year’s biggest buzz bands, the Dublin outfit have rejuvenated the punk genre and left their own indelible, distinctly Irish stamp on it. They justified all the hype by releasing one of the finest albums of the year so far in ‘Dogrel’ and are sure to incite mayhem at what is building up to be a memorable TRNSMT set.

From humble beginnings in some of Glasgow’s most intimate venues to a slot on the King Tut’s stage at Scotland’s biggest festival, The Dunts have established themselves as one of the most exciting acts in Scotland’s thriving punk scene. Weaving a powerful social commentary through their fiery punk anthems, they are known to incite chaos at their electrifying live shows and this will mark their first gig in Glasgow in a while. Having recently played SXSW in Texas, they are backed by an army of diehard fans which is started to grow well beyond the confines of their hometown.

From playing some of Glasgow’s most intimate venues to seizing the attention of tastemakers all over Scotland and beyond, it has been a busy few months for Zoe Graham who has made her presence known at a number of industry showcases and gigs down south. Bringing together a diverse range of influences such as traditional folk, hip-hop and modern indie to create her own wholly unique style, she is known to hold audiences to a standstill with her captivating performances.

Led by the charismatic and incredibly dynamic vocal stylings of Anna Shields, CRYSTAL are very much embedded in Glasgow’s thriving rock scene. With big performances at Tenement Trail, Wide Days, Stag & Dagger. Edinburgh Hogmanay and Electric Fields and more already behind them, they have established themselves as one of the city’s most incendiary live acts. Gaining comparisons to Wolf Alice, their grungy, jagged guitar-driven anthems are aching to be heard by a mainstream audience.

With only two singles to their name, Edinburgh’s Swim School have certainly made their mark in recent months. Led by the incredible vocals of Alice Johnson, their shimmering, brilliantly infectious indie-pop sound finds them following in the footsteps of Pale Waves, Wolf Alice and more and they are sure to win over many more fans with their biggest gig to date on the Queen Tut’s stage.

Scottish hero and man of the moment Lewis Capaldi has stepped in to take Snow Patrol’s penultimate slot on the Main Stage at this year’s TRNSMT. Sunday tickets sold out within hours of his announcement which is testament to Capaldi’s star power these days. From playing to pubs and clubs in and around Bathgate to having the fastest selling album of 2019, the TRNSMT crowds have been there from the very start; from his performance on the King Tut’s stage in 2017 to his Main Stage debut in 2018. He returns this year for his biggest Scottish show to date as one of the biggest pop stars in the UK.

One of the first names announced to play this year’s Tenement Trail, Sea Girls will make their Scottish festival debut at TRNSMT this Sunday. Having secured regular Radio 1 airplay for their hugely popular single ‘Damage Done’, they are a band who are reviving the spirit of noughties indie and bringing indie-pop back to the mainstream.

Another product of our nation’s flourishing music scene, Retro Video Club will deliver a rambunctious set full of rapturous indie-rock anthems. Hailing from Edinburgh, the band have sold out Liquid Rooms, played Edinburgh Summer Sessions alongside The Vaccines and Bastille and support various bands like The Hunna at the Barrowlands. Widely regarded as one of the nation’s most exciting emerging prospects, they’ll certainly blow the cobwebs away on the Sunday of the festival.

Bursting out of Ireland’s flourishing music scene, Limerick trio whenyoung have steadily established themselves as one of the most exciting indie bands in the UK with their striking combination of vibrant guitar-pop and heartfelt lyrical matter. Defined by a sense of giddy escapism and the exhilarance of youth, their critically acclaimed debut album ‘Reasons to Dream’ has drawn comparisons with The Cranberries among others and they are sure to win over many new fans at TRNSMT.