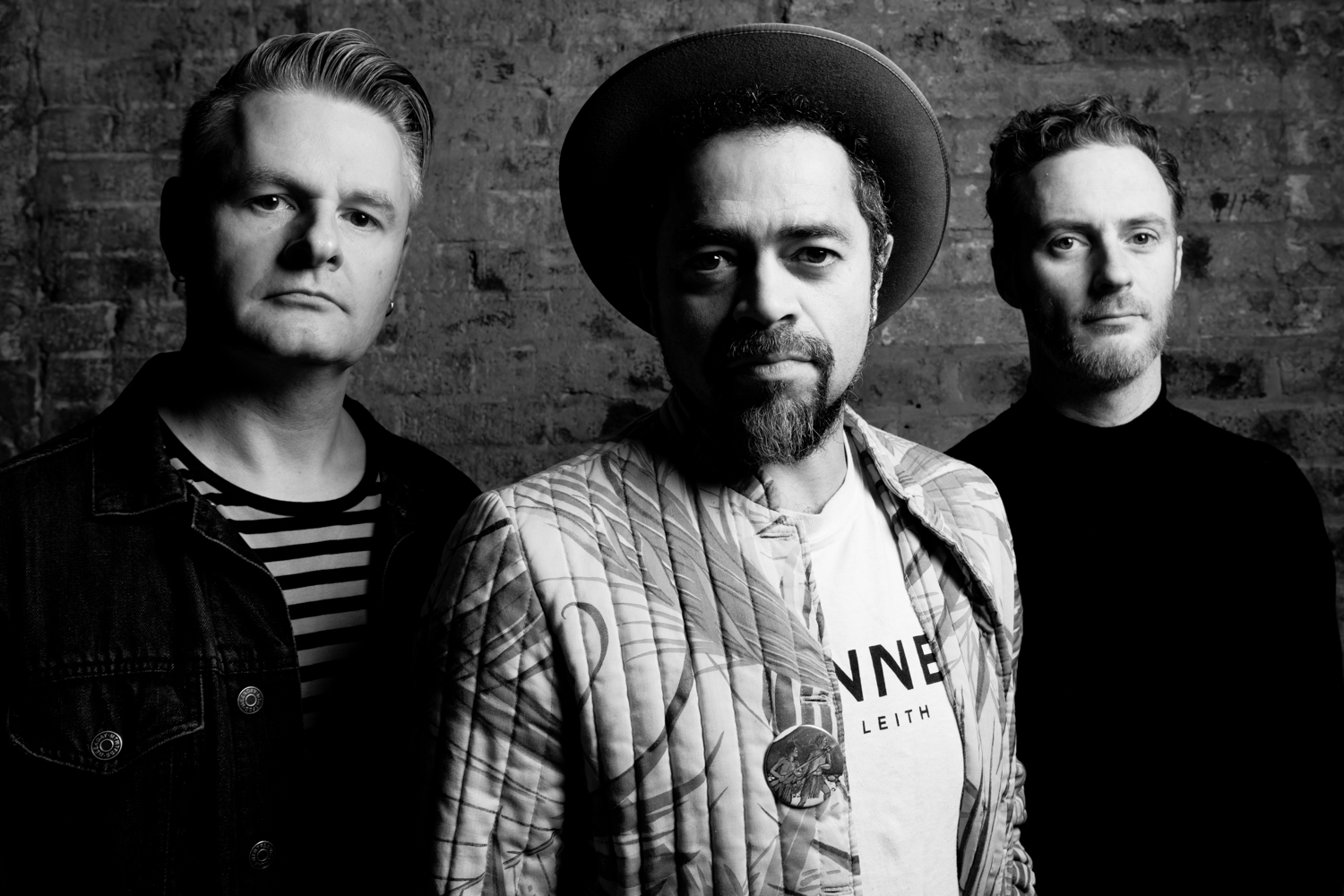 CHECK MASSES emerged from the shadows earlier this year like something out of a nocturnal fever dream.

Bringing a wealth of collective experience to the table, singer ‘Philly’ Angelo Collins, multi-instrumentalist Vic Galloway and producer Saleem Andrew McGroarty each railed against the “crassness of the mainstream disco pop culture” as teenagers in Edinburgh, Vic forming a love of underground rock & roll, ska and reggae and Philly and Andy surrounding themselves in a “more cultivated music scene that revolved around black music”.

It’s no surprise then that their music draws from a vast and varied list of influences, making up a tightly-knit collage of of shuffling dubby beats, soulful vocals, guitar twangs, melodica and strings. Full of hazy mystique and gritty soulfulness, CHECK MASSES are the soundtrack to an early-hours wander in the middle of town; the sound of hedonistic desire, temptation, paranoia, relationship fall-outs and more. With enticing melodies and yearning beauty, they grab you by the hand and lead you into their dimly lit, seductive sonic world; a world kindled by smouldering candlelight, dusk-to-dawn tension and lysergic, trip-hop soundscapes.

A collection of nocturnal thoughts and stories are woven into their debut album ‘NIGHTLIFE’. Currently available on main streaming platforms but with a physical release slated for 1st July, it’s the glorious dose of escapism we all need right now.

As they build up to the record’s physical release at the start of the July, the band have continued its promotional roll-out with the release of a brand new video for ‘LOST IN THE CITY’, as you can see at the bottom of the page. Following its release last week, we catch up with the band’s Vic Galloway, also known for his long-standing weekly show on BBC Radio Scotland which champions new and alternative music from around Scotland and beyond. Our conversation covers lockdown, radio, ‘NIGHTLIFE’, influences, new music and more.

“I’ve been able to keep doing some BBC shows during lockdown – I’m freelance though, so loads of other work stuff has just vanished” he tells us. “These are challenging times for sure! I’ve been cooking loads with my girlfriend, taking walks & runs, catching up on some reading, listening to loads of jazz and watching documentaries. I’ve also started working on loads of new CHECK MASSES instrumentals so that singer Philly can jump on them when the restrictions are lifted”

Of course when the band initially set out to create their debut album, few could have predicted the circumstances which now surround its release.

“It’s definitely a strange time to be releasing music in any form just now. However, before Covid-19 we had a plan in place to put stuff out with singles, album, promo etc… and we’ve just gone for it!! We thought about delaying everything, but we’ve been sitting on the album for a wee while now so we were keen to get it out into the world. I hope folks like it. The music doesn’t stop because of Coronavirus! In some ways, it will be terrible timing… in others, it may help people focus on the release and actually listen to the songs. The vinyl sales have been great so far, and it looks like the label may sell out of the pressing fairly soon”

‘NIGHTLIFE’ will appeal to fans of Massive Attack, TV On The Radio, UMO, Dangerhouse, Bob Marley and more. A sum of all of their influences, it touches down on psychedelic soul, hip-hop, indie-grunge and more and is a product of the trio’s 30-year immersion in Edinburgh’s eclectic music scene.

Vic says: “We’ve all known each other for years through Edinburgh’s different music scenes and club-culture, but never dreamed of making music together. I’m from a more garage/punk/rock’n’roll background, Philly was signed to EMI, sang vocals with Macy Gray and made acoustic soul music before, and Andy is a Hip-Hop head who’s been producing tracks and making beats for ages via labels like Mo Wax and others. In a way, you can hear ALL those influences in the music on the album. It’s a melting-pot of sounds, but is all the better for it I think”

“The whole project started when Andy and I went to see Alexei Sayle doing some stand-up a few years ago. We grabbed a pizza afterwards and talked about music-making. We decided to collaborate on a track together, and ended up doing 5 or 6 songs. They sounded good too! We then asked Philly if he wanted to get involved, and he did thankfully. The first track we worked on together was DRIPN ANGEL, which became the first single and the album opener. Immediately we knew we had something special!”

‘DRIPN ANGEL’, which was released back in January, is a perfect snapshot of what to expect from the record. The dub-meets-electro track wouldn’t sound out of place on the soundtrack of a Spaghetti Western – Vic Galloway’s twanging guitars ring out against a steady rhythmic march which effectively recalls the foreboding, almost primal momentum of Nick Cave and the Bad Seeds. It proved the catalyst for what was to come as they hunkered down in their home studios to complete a whole record.

“The NIGHTLIFE album was recorded across 2 (fairly low-spec) computers in Andy and my flats! Yep, just home recording and mucking about on hardware and software at home. I think being relaxed and having had experience in previous bands and projects, prepared us for this. Having said that, it was all kinda spontaneous and came together really quickly. Each song has its own story of course, but for the most part… they start with a beat, sample or loop from Andy, then I build up the instrumentation with guitars, bass, keys etc, and then Philly and I turn that backing track into a song, with melodies, lyrics etc. Andy takes the parts back and produces/mixes things. Hey presto, we have a tune!”

Having all pursued individual projects in the past, we ask what has made this particular experience so special. “This whole project has felt totally natural and devoid of ego.” Vic says. “No-one’s a primadonna and we all just want the tunes to sound good. If an idea works, it works… simple as that. Maybe all that experience before has prepared us for this band. We’re probably more open-minded and less tribal in our tastes too – we all like all sorts of art and that’s reflected in the music. Older, wiser, but more inspired than ever!

Their influences stretch beyond the realm of music too. There’s a very cinematic feel to the album – the trippy, laid-back soundscapes, the sense of Lynchian unease, the smoky late-night tension, the shudder and twang of Vic’s guitar parts and the gritty lyrical content. Vic notes “We’re all into film, visual art, painting, poetry, sound, fashion and aesthetics, so it all goes in there. For cinematic references, there’s some David Lynch, Jim Jarmusch and Akira Kurosawa influences in there. We want the videos for the singles to have a certain vibe too – check them out online. Gareth Goodlad from Dangerkill Productions is our main-man!! And our artist friend Bernie Reid (@reid.bernie on Instagram) kindly helped by donating his stunning paintings for our artwork on NIGHTLIFE and the first 2 singles. We’re lucky to have such talented pals!”

Whether it’s their striking debut single, the bluesy, deeply atmospheric ‘KILLER’, the swaying, melodic ska-pop of ‘LONESOME LITTLE PARADISE’ it’s hard to pick a favourite moment on the record. “Ooft, they’re all your children aren’t they?! This is like Sophie’s Choice’! I think we all like KILLERS – it’s probably the darkest track on the album and maybe the least commercial, but it has a heavy vibe and is saying something profound in its own way. I like all the singles too – DRIPN ANGEL really connects with people and was our first track together, LONESOME LITTLE PARADISE is a personal song and a real ear-worm, and LOST IN THE CITY is a soulful head-nodder too! They’re all good though, and have lots of different textures… Hopefully we’ve made a belter of a debut album!”

Latest single ‘LOST IN THE CITY’ has been accompanied by compelling new visuals courtesy of frontman Philly and Marta Aspe. Teaming up with Gareth Goodlad from Dangerkill Productions once again who is on directing and editing duties, it’s a suitable trippy visual which features vintage footage taken in the 1970s.

“We had to think completely out of the box for the video for ‘LOST IN THE CITY, being in lockdown in Edinburgh and unable to meet or gather in groups. So lead singer Philly’s girlfriend Marta filmed him singing and swaying to the track in their house. Gareth Goodlad at Dangerkill Productions took that raw film, worked his magic and superimposed Philly onto swirling, kaleidoscopic cine-film collages of New York City from the 1970’s. Much of the footage was actually filmed by Andy’s grandparents back then, and has never seen the light of day.”

Channelling vintage sounds through a modern lens, CHECK MASSES are a unique and refreshing addition to the nation’s ever-evolving music landscape. Of course, Vic Galloway is a true authority on this subject as he is also known for his weekly show on BBC Radio Scotland which champions new and diverse talent from all over Scotland and beyond. Who has been catching his eyes and ears recently?

As for CHECK MASSES, festival season may be out the window but there’s still lots to get excited about.

“We’re got the new single LOST IN THE CITY with a new video (made in lockdown!), and point people towards the NIGHTLIFE album as much as possible. The vinyl looks and sounds great, and it’s across all streaming and download sites. I really think if people dig in and listen, they will really enjoy the 10 tracks. As I said, as soon as we’re allowed to meet again we’ll start working on new tracks, and rehearse for playing LIVE again asap too. We had gigs and festivals lined-up, but they’ve all disappeared now… The thing I’m most looking forward to is being able to travel again – for work, the band and for fun. Oh, and I need a feckin’ haircut too!”

NIGHTLIFE is out now on Triassic Tusk Records. Currently available on all main streaming platforms, you can listen HERE.

The album will be released on vinyl on 1st July. PRE-ORDER HERE.

Watch ‘LOST IN THE CITY’ below.