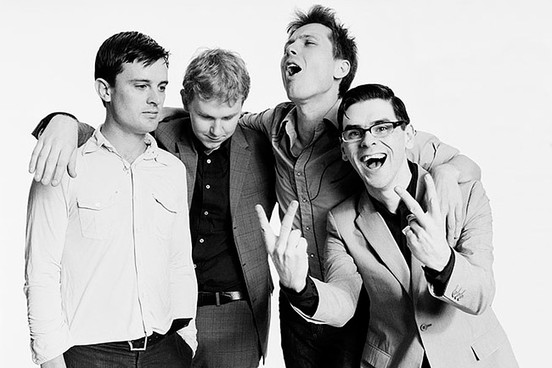 On the other side of the world, Tenement TV catch up with a band that holds Glasgow very close to their hearts. Glaswegians themselves Franz Ferdinand are headlining Clockenflap festival, their new album causing a wave in the growing band scene in Hong Kong.

The band recently worked on a graphic video. Inspired by Italian gore films, Evil Eye took inspiration from 70’s B-movies: “Our new video was great to shoot, it has a great vintage cult movie vibe. We are all a bit squeamish, it was great to witness behind the scene action and to realise that it wasn’t real.

“We went out for dinner with the director Diane. She has loads of amazing ideas. It’s great when its funny and you can see behind the scenes in some way or another but I don’t like gore when its meant to be real. That’s not our thing.

We worked with special effects guys who work on The Walking Dead, that’s what they do.”

Signed to Domino, Franz Ferdinand are alongside Mercury Music Prize nominees Arctic Monkeys and Villagers: “We love being on Domino! We wouldn’t want to be on another label. It’s a personal relationship as well. We deal with the guy who owns Domino, that’s who we deal with. We have dealt with him since day one.”

Proud to be Scottish, the band embrace fellow Glaswegian artists , recently inviting local band The Amazing Snakeheads to support them at their Glasgow show: “They did a wee show in London and they played with us at QMU. I think they are intense, what an amazing band.

“We also love Casual Sex– they are amazing. Golden Teacher are a great band as well”

Their second time in Hong Kong, the band talk about their experiences in Asia: “I remember enjoying the show the last time we were here. I love the Chinese dumplings and noodle soup.

“We will watch Chic while we are here, I have never seen them before. We watched BRMC too. I would love to see a bit of Nile Rodgers playing, I mean my god it’s Nile Rodgers.

“We have been to loads of places in Asia; Malaysia, Taiwan. It’s been an amazing trip actually, makes us want to come back really soon. We haven’t been to Beijing yet but one of our friends is from there and tells us we have loads of friends there.”

Collaborating with Hot Chip for their latest LP, the band released their new material in 2013: “Hot Chip are really good guys to get on with and really easy to work with. They are great musicians so we had a great experience with them.

“We have had two four year gaps between the albums, touring makes those gaps basically. I don’t know how long a gap we will have this time. We are really keen to get back in the studio. We can’t wait for The Barrowlands gig, that’s going to be great.

“The album we have just made is the one that we enjoyed making the most.”

And what about a session? “If we’re passing by the West End, give us a shout for a session!” We think we will hold you to that one, boys.

Black Rebel Motorcycle Club talk about a whole year of touring, their own record label and more