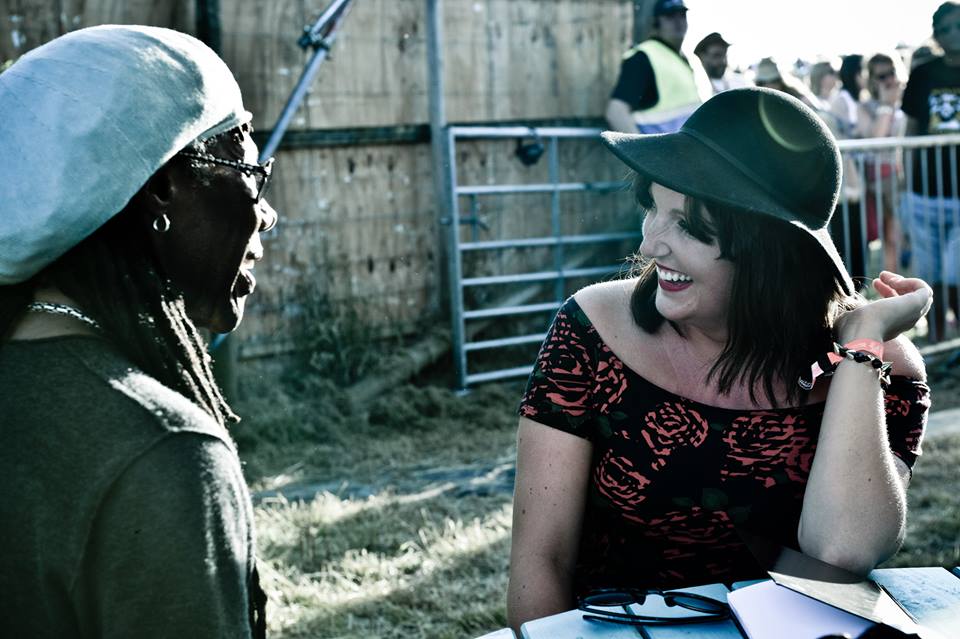 IF there were ever a metaphor for the funky hit-maker that is Nile Rodgers it would have to involve some sort of god-like comparison. As he took to Wickerman’s Main Stage on Friday night it were as if he had the crowd on puppet strings, dangling them on the edge of euphoria with instrumental mishmashes that included Diana Ross, Sister Sledge and David Bowie- each track taking it up another level of funky disco and displaying just what he has done with the last sixty years of his melodic life.

Mingling backstage, Rodgers smiled with his fans in the VIP area greeting him with glee. He took what little time he had proceeding his set to speak with people, exchanging thank you’s and winks with the sun drenched Wickerman revellers. Tenement TV offered Rodgers a more comfortable seat from the interview area that was made up of haystacks- much to his delight: “I don’t care for that hay young lady, thank you for getting me off of there,” and what better way to start a chat with one of the most talented producers of our time.

Rodgers hasn’t had the most perfect of year’s, perhaps an underlying message in the biggest hit of 2013- Get Lucky didn’t cut it when he was diagnosed with cancer. When faced with death, Rodgers reaped the success of yet another number one record- and he believes that success helped him beat the disease. Just 24 hours ago, Rodgers took to his twitter to tell the world the news we were all praying for. He’s been given the all clear.

“I feel amazing about the success of Get Lucky. I don’t think of the audience who likes the song by the age group, I am not happier that a fifteen year old likes it or a fifty year old likes it.

“But then again, if there were a bunch of elderly people saying ‘oh my goodness, I love this song’ then I would think ‘wooooooahhhh, look at what I just pulled off’.”

And that’s the thing about disco; it speaks a universal language that we can all share together: “As a composer, you just want to talk to people, man. You just want them to hear it.

“I am not doing a song for a young or old person, I am doing it for them all. I am not surprised when a young person or an old person likes it, I am just surprised that anyone likes it at all.

“If I made a Daft Punk record that was more like what they did traditionally, it would have got a different response. But an interesting phenomenon is the fact that they done a record that is more in the style of what I do.

“Get Lucky is a retro sounding record, that shows that Daft Punk felt something in their hearts.

“They didn’t think, ‘Oh Radio 1 isn’t going to play it because it sounds retro, I have heard all that stuff before, but Daft Punk were different you know.

“They said, ‘Well we have grown up with this kind of music, we love it and we want to do it.’

“When they said that to me, I was more impressed with the bravado of that statement than making the record, and being worried with whether people would accept it or not.”

Chic have been touring as if the world were about to end, and perhaps that’s the point. Rodgers took cancer by the horns and dragged it around the dancefloors, their performance at Glastonbury a great highlight of the summer.

Now-a-days, rock ‘n’ roll bands command you to move, dancing is strictly optional. Rodgers is offended if you don’t groove and have a good time at his shows- a stark contrast to the moody-successors of today: “A couple of years ago at our shows, what did surprise me was how many young people loved our old music.

“Now that was amazing.

“I don’t know what the response is going to be, so what we do is approach our shows like old school DJ’s. A crowd will come into a space, you don’t know them-they are strangers. You have to do music that will evoke a reaction. If the reaction is bad it will only make us play better.”

Showing his soft side and his warm heart, Rodgers adds: “I feel bad for the fans, not for me. For me, I am always going to have a good time. But if you don’t have a good time then I feel like I have let you down.

“Back in the old days, if we had a bad show, people never really booed us, but they did come close.

“I would think, shame on those mother fuckers tomorrow, because that crowd tomorrow is going to get the show of their lives.”

I am unsure if the most amazing part of those fifteen minutes was Nile Rodgers, the legend of disco, calling me a sweetheart as we ended our interview, or the fact I witnessed him say ‘mother fuckers’ through a gleaming smile. Either way, its going to take one hell of an interview to beat this.