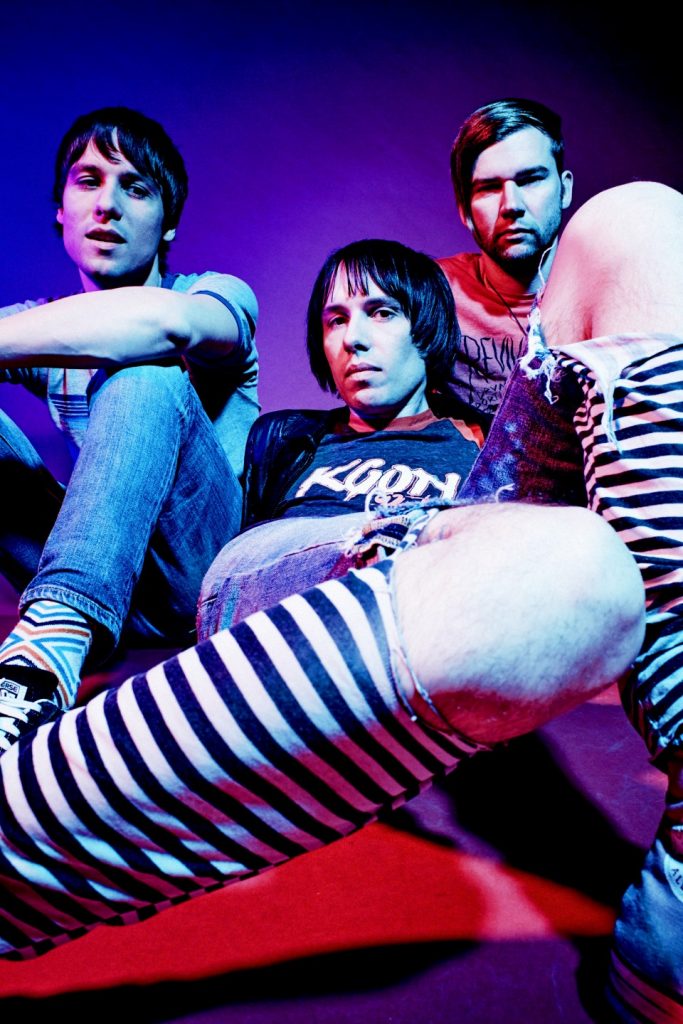 ONE of the most enduring and fast-living bands, whose iconic indie-punk tunes soundtracked the music scene of the late 2000s return to Glasgow this week. We caught up with Gary Jarman of The Cribs.

Ahead of their appearance at Tenement Trail, Gary was reminiscent of the band’s first experiences with a Glasgow gig.

“I think we played at King Tut’s with the Sleepy Jackson, we were opening up in 2003. It was a good show from what I remember, except we were the first band on, and I remember Ryan was wearing a catsuit and the venue was really hot. I think we were kind of a mismatch with Sleepy Jackson, so we used to just try to, if the crowd were a little bit stand-offish with you not being the main band, we used to try and provoke people. I remember it being a pretty provocative gig.”

“The second time, we played Nice and Sleazy. I don’t remember much from that show, but I remember Stephen Pastel was there, and again Ryan was wearing a catsuit, and we popped a bottle of champagne on stage. I was quite embarrassed, cause I thought Stephen Pastel probably would’ve thought we were total rockstars by busting out the champagne, but we were just goofing around.”

Those shows represent perfectly the philosophy The Cribs adopted for their early shows.

“Back in those days, it was like ‘a gig should either be great, or a disaster.’ We always had backup plans that would either completely ruin the gig or make it go off. It’s so hazy in my memory now that I can never remember if it would save the gig or ruin it, they were all pretty fucking on the edge of being amazing or disastrous. A gig we did at T in the Park in 2004, on the NME stage, we were the first band on at 11am. We were really drunk…I thought it was great. Dave McGeachan said he genuinely can’t figure out to this day that he can’t figure out to this day whether it was the greatest gig or the single worst gig he’s ever seen in his life.”

“Now we are a little bit more consistent.”

Despite growing audiences, less catsuits and a touch more professionalism, Gary admits that, to an extent, they still feel like the same band they were 15 years ago.

“I feel like we are the same band, I can’t imagine still living that way, but we apply it in a different way. I say this hand on heart, we’ve never done a gig less than 100%, even if we are ill. We played in Manchester last weekend and we were told if we wanted a soundcheck we had to be there at 9am, we didn’t play until 11 o’clock that night. We just hung out in a warehouse all day for 14 hours, on Ross’ birthday, but we wanted the show to sound good.”

“It doesn’t matter, the show is the most important thing. I’ve we said we are going to do a show, we want to make sure that people get their money’s worth and that we do the job that we were brought in to do. Back then, people weren’t paying 20 quid to see us, they were paying 5 quid and didn’t know anything about us, so we were just like ‘if all else fails, just do this, it will be absurd and we will get a reaction.’ It was a chaos period, whereas now we still have the same ideology but we just apply it differently.”

This ‘chaos period’ for the band may have been enjoyable at the time but Gary admits, looking back, they couldn’t do it again.

“You know when people say to you ‘if you could live your life again…?’ It’s easy for me to say that I don’t think I could physically, possibly do it again. When I think about my twenties and how much I went through and dealt with, I genuinely don’t think I could do it again, it would be too much. But at the same time, I’m glad. I’m so proud of the reputation that we have, it was always memorable.”

In 2007, The Cribs released their iconic album ‘Men’s Needs, Women’s Needs, Whatever’. 11 years on from it’s release, Gary looked back and revisits the album and the longevity of it’s songs.

“It’s a funny one. When you release a record, you put it out, then tour it for 18 months or 2 years, then you file it away in your brain, that was a period of your life that you documented but you’ve moved on. You don’t realise how long it has been. But, when we were doing the 10-year ‘reunion’ tour and doing the reissues, it’s been on my mind a lot recently. It changed things for us so much. In some ways it feels like a long time ago, it is hard to remember what it was like before that. It took us to the next level. But, it is still fresh to us in other ways. I hadn’t listened to it for a while and I was listening to it because we were talking about it so much, and it sounded good to me. I’m not a self-congratulatory person, but I was surprised at how it really sounded good to me and I enjoyed listening to it. Whereas when it first came out, I struggled to listen to it, because I felt like it was so well recorded, well mixed and the vocals were so loud, I was quite uncomfortable with that. But now it still stands up, I’m really proud of that”

However, the album’s success may have changed the band’s size, but it did not change the philosophy they subscribe to.

“It took us to the next level, but we still tour out of a van now, and choose to do things that way. We still subscribe to that Fugazi ideology, where there is no excess, you just take what you need. We only need a bear minimum way to get by. But having said that, we used to live in the van and sleep in car parks, had we not had a breakthrough record that took us to the next level of venues, would we still be doing that? Maybe, I don’t know, or would we have burned out? It is more likely we would’ve burned out.”

This Saturday, The Cribs will once again treat Glasgow to their riotous indie-punk at Tenement Trail.

“I’m looking forward, we are going to be there all day. We will up, soundcheck then hang around, and for us, the fact there is so much going on that day makes it a lot better.”

“We haven’t really spoke about it much, but Glasgow, after those early shows, quite quickly became a really important city for us. Again, Dave McGeachan, he warned us initially, saying ‘if people don’t like you, they will let you know. You will either be popular, or you’re gonna know about it.’ That was before we played the Barrowlands for the first time, we had a great show that night. After that, we never lost Glasgow, they were always with us.”

“For a band that has been going for as long as we have, that kind of loyalty is such an important thing to us, and such a precious thing to us. We just love Glasgow for that, it has been a very reciprocal love-fest. That’s why when we came up in December to do the Christmas shows at Tut’s, we were thinking of putting Cribsmas to bed, we had done it a couple of times, we just thought to ourselves that we can’t really do it without taking it to Glasgow.”

“The Tenement Trail show will probably be a similar thing to that. I’m really bummed the O2 ABC was damaged, because it’s such a beautiful venue and I was really looking forward to playing there so I’m sad that happened, but at the same time, we haven’t played the Garage for 12 years, so that will be fun. I think it is our last show of the year, we don’t have anything else booked…

It’ll be a nice way to end the year.” 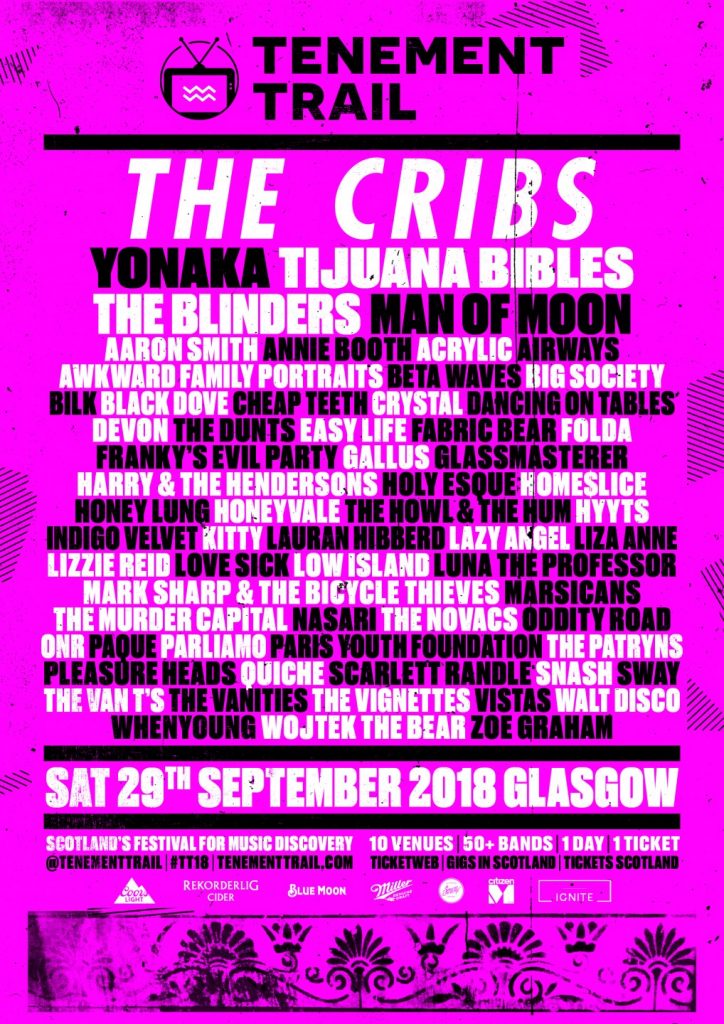 TTV TALKS: The Blinders on their debut album, politics and Tenement Trail