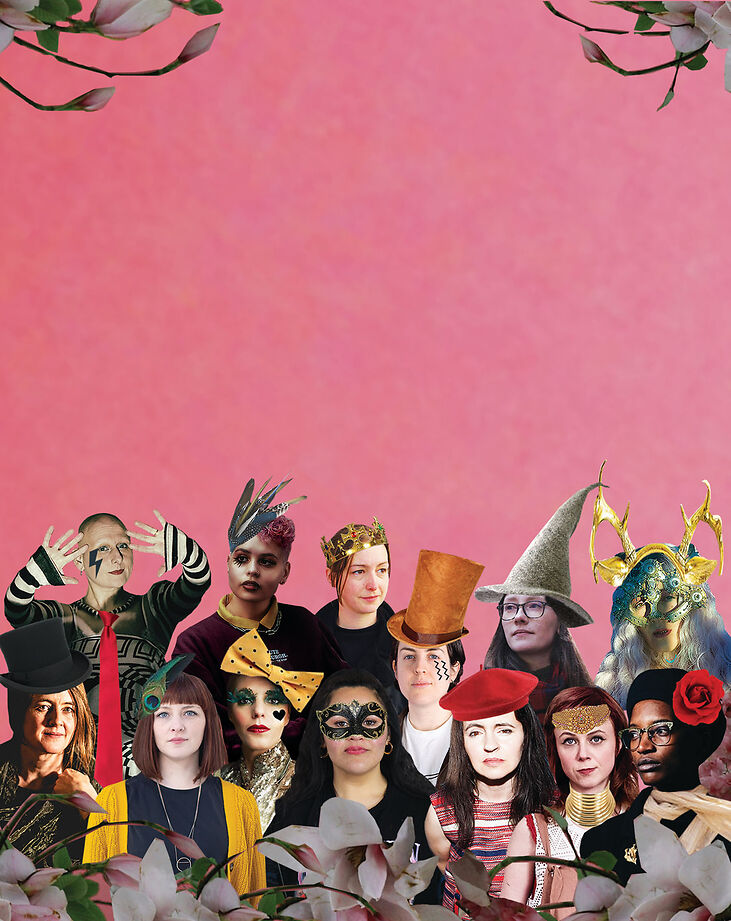 TODAY marks the release of ‘Equaliser’, the brand new album from Hen Hoose; a songwriting collective composed entirely of female and non-binary artists brought together under a unique manifesto – to challenge the gender inequality still rife in the music industry.

Funded by Creative Scotland and founded by Tamara Schlesinger (aka MALKA), the group features an all-star line-up of artists from a wide array of genres and musical backgrounds (Pippa Murphy, Karine Polwart, Amandah Wilkinson, Emma Pollock, Jayda, Carla J Easton to name a few) and on ‘Equaliser’,  which is mixed by producer Susan Bear and mastered by an all-female production team at Novasound, they’ve created one of the finest records of the year. Innovative, moving, creatively inspired and utterly unmissable, the group manage to bring their disparate influences together to create one incredibly varied yet cohesive record that shines a light on all the best parts of Scotland’s thriving alternative music scene.

On the day of release, we catch up with the group’s founder Tamara Schlesinger to hear about this incredibly inspiring initiative, how it came about, their collective goals, the creation of the album and what’s to come.

“Hen Hoose was formed as a way to address gender inequality in the music industry.” Tamara reveals. “I got so tired of seeing the stats for women and non-binary artists on festival line ups, receiving radio play and signing to record labels and publishing companies that I wanted to try to do something myself about the issue.”

“The idea behind Hen Hoose was to pull together some amazing artists, composers and producers to collaborate on a project that really shone a light on just how much incredible talent there is right under everyone’s noses.  We were incredibly lucky to secure funding from Creative Scotland which meant that it was possible to make the project a reality.

Initially forming last year as the world began to close down, Tamara admits that lockdown did play a big part in the group’s existence and the subsequent creative process.

She says “In a way, lockdown actually made this project work even more. I think that as women and non-binary artists we have become so used to going into a studio to record or mix our music and 90 percent of the time there is a man behind the desk or engineering. The fact that we were stuck in our own homes and had to record and produce all the music ourselves meant that some of us took on roles that we had previously shied away from.

“We also collaborated remotely, which enabled some of the mums in the group to work around childcare and that opened up more accessibility. Of course there were times that it would have been quicker to sit together and work on the tracks so there were also negatives, but I also think that it gave us all something positive to focus on during that period.”

Of course, throughout this time, with no gigs or live music opportunities, it seemed that many working musicians were put on an even playing field, propelled into a frenzy of creativity when left to their own devices. However, as things started to open up again, gender inequalities began to resurface – particularly across line-ups and in pay gap stats. Despite all this though, Tamara believes this period has provided a great deal of fuel for the battle ahead.

She says “To be honest, in many ways it feels like everything has just gone back to how it was pre-lockdown and that is all quite depressing. Some of the festival line ups this year were as bad as ever and the recent gender pay gap stats in the music industry that were published were awful. However, I do think that there is more of a fight than ever and I really do hope that we will see these changes embraced by the industry. I think that it is time for action now and much less talking.

Through her own songwriting pursuits as a member of 6 Day Riot and under the monikor MALKA, as well as her experience as a music lecturer, Tamara recognises from her own wealth of experience in the music industry that Hen Hoose is an absolutely vital initiative for the Scottish music scene – both for now and the future, as the next generation of songwriters and producers begin to emerge.

She says “I think this is so vital, It is so important for young girls to see other women in the roles that they want to go into for a career, so that they believe that they can achieve it too. For example, there are so few female record producers that there is such an imbalance when it comes to women choosing to take audio courses. There are some great initiatives in Scotland now that are focused on empowering female and non-binary artists and I hope that together we can all make a difference.”

When it came to Hen Hoose, the key was to reach out to a variety of artists – both in terms of genre, style and skillset. What initially began as a few friendly queries, gradually developed into the wide-ranging, collective force it is today.

“I approached a few friends initially to sound out the idea and to see whether they were interested in the project as a whole. And after that I began to seek out more artists that I hugely respected and thought would be keen to be part of the project. I wanted to get artists across multiple genres and styles and also people that were comfortable across different roles, for example, production and mixing, so that we had as much of a showcase of talent as possible.”

From there, ‘Equaliser’ began to form. What’s particularly striking about the album is that it flows together completely seamlessly, all while pulling from a diverse range of influences and traversing an array of genres such as pop, rap, R’n’B, folk and more. Bringing their disparate influences together in one cohesive whole, there’s a strong sense of identity tied to these songs that makes for a warm, inviting sonic environment.

“I hoped that the album would feel cohesive and have ‘a sound’ which I think we achieved as there are a number of writers that appear on different tracks, so there is a sonic identity that runs through the project.” she says.

“In terms of themes, I set briefs to each writing group. The idea being that these songs could also be pitched out for sync (TV/Films) at a later date and hopefully bring additional revenue streams to the writers involved. You could pick between certain briefs and work broadly within that style. Each group chose their own direction and collaborated together. I think that without those briefs we would have seen a lot of recurring themes of the struggles with lockdown, so in a way it took us out of our own bubbles for a short while.”

When working with such a wide variety of artists with different strengths and approaches, it’s particularly interesting to hear how the artists were grouped together for each track: “I selected the writing groups for each track, which was lots of fun. I wanted to try and put people together that had never collaborated before and also to put writers together that tended to work within different genres. I felt that this way the artists would get the most out of the project as they would be pushed out of their comfort zones at times, but that it would hopefully be an empowering and positive process (which I think it was)”.

By being pushed out of their comfort zones, it meant that each artist was able to explore exciting new creative avenues. This is particularly evident on tracks like Karine Polwart and Tamara Schlesinger’s ‘These are the Nights’,  a striking amalgamation of the former’s thoughtful lyricism and the latter’s dynamic electro-pop, and ‘Burn It All’ by Inge Thomson and Beldina Odenyo, an utterly bewitching piece of songwriting that combines stark avant pop and tender folk.

Speaking about the collaborative process, Tamara says “I think the collaboration was actually the biggest positive from the whole project, With such an array of talented artists you could only be inspired by the person that you were working with. Many of us have felt like we pushed ourselves into new roles and learnt a huge amount from each other creatively. None of the songs would have sounded the same if we had not been collaborating and that is very exciting. There is also that sense of community that comes from working closely together. There is a huge amount of respect and admiration for everyone within the group.”

She adds “To be honest, I think the whole album is outstanding, I really do. Each time the artists would upload their tracks after completing a round of writing, I would listen and feel such pride and delight. We would have listening parties on zoom each month and listen to songs together and we were all so impressed with each other. I think the whole album has to be listened to and enjoyed. It is so varied and so distinguished.”

Whether it’s the rousing and rich Americana hues of Emma Pollock and Pippa Murphy’s ‘Monochrome’, the irresistibly catch electro-pop of ‘The Best’ (Carla J Easton, Amandah Wilkinson and MALKA), the gospel-inspired hip hop of ‘Revolution Retribution’ (Jayda, Amandah Wilkinson) or the stomping pop of ‘Make It Alright’ (Elisabeth Elektra, Sarah Hayes), there really is something for everyone.

Where does Hen Hoose go from here though? Tamara reveals all: “Part of the idea behind Hen Hoose was to look at additional revenue streams for writers, we have been creating music for TV adverts, films and now podcasts and that is definitely something I would like to develop even further, we have been doing that collaboratively so the whole concept remains there.

“I would love to do a live show as well. The artists are all keen to make that happen, so we just need to find a date that we can all do. And finally I would like to look at bringing in some more up-and-coming talent, to work alongside some of the more established writers.”

With that all in mind, there’s an incredibly bright future ahead for the group. While there’s still a lot to do, it’s projects like this that will continue to inspire new songwriters and producers, and enact real positive change in Scotland and the wider UK music industry.

Tamara closes by saying “In general I think that this problem can only be solved from the top down. We need those that have the power to make the changes to actively do so. I think that was why I wanted to create Hen Hoose, to take things into my own hands, Hen Hoose is grass roots but for bigger changes, it needs to come from the top. A good start would be to look at certain festivals and venues to make a difference with line-ups.”

Buy the album from Bandcamp here.