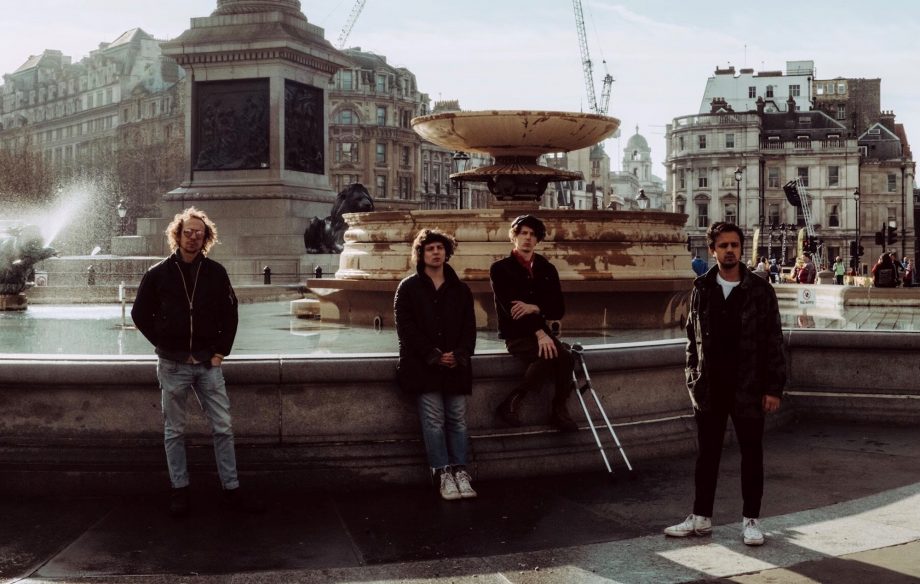 MYSTERY JETS make their eagerly anticipated return to Glasgow this weekend to play Scotland’s biggest music festival TRNSMT for the very first time. The indie outfit, who burst onto the scene in 20016 and rose to prominence with hugely popular anthems like ‘Young Love’, ‘Two Doors Down’ and ‘Bubblegum’, unveiled a brand new track ‘Hospital Radio’ this week ahead of their performance; a stunning tribute to the NHS and the staff who have helped lead singer Blaine Harrison over the years with his Spina Bifida.

‘Hospital Radio’ is the first piece of new music we’ve heard from the band since their 2016 critically acclaimed fifth album ‘Curve On the Earth’ and it not only sees the band explore new sonic territories but it also marks the beginning of their quest to launch themselves back into the public consciousness.  And with their TRNSMT performance about to kick off a very busy period for the band, we caught up bassist Jack Flanagan about all things festivals, a noughties indie revival and new music.

“I love Glasgow!” he exclaims as we catch him in the middle of playing guitar, “doing all that typical, boring, stereotypical stuff”, he jokes.

Citing some of his favourite memories of playing in Scotland, he says: “We love Edinburgh actually. We played Liquid Rooms there. There’s another Liquid Room in Japan that I really love but we played the one in Scotland and it kicked its arse! We could all feel the room bouncing up and stuff”

The band’s set on the King Tut’s stage on Sunday evening will see them reacquainted with the famous Glasgow crowds. “Yeah totally, I can’t remember the last time I did a gig in Glasgow as it was quite a while ago but Scotland never fails!

With five albums to their name and another on the way, the band have a vast array of material to pull from to make up the perfect festival set. Jack joes that it takes “a lot of arguing” to put together but they like to keep things fresh. “There’s so many songs, there’s five, nearly six albums of material. At the moment we like to mix it up a bit. We have two singers so we can be quite picky with what we do whether its Blaine heavy or Will heavy, its good fun. I really like doing it”

Mystery Jets are one of the many bands who have benefited from a recent noughties indie revival, much like their TRNSMT counterparts The Wombats and The Kooks. He said: “It’s weird you know because bands like The Kooks and The Wombats are huge aswell. There’s like a huge resurgence of these type of bands … that first Kooks album is just hit after hit. I saw them play in Argentina a couple of years ago and it really hit home for me how different indie music was back then. I don’t know what the new wave is… everyone just sits and makes music on their laptops now so it’s all so different. I don’t havea gauge of any scene as I’m not part of one”

It goes without saying that many of these artists, including Mystery Jets themselves, have started to resonate with a new generation of indie fans. Jack says: “I think because of Spotify. It’s not about the charts anymore or so people keep telling me. It’s not about the charts. It’s about Spotify playlist. The primary reason though is because they’re all really good bands but Spotify helps to reconnect their songs with a newer generation, and it’s all the brothers and sisters of people my age”

While so many of their two-dimensional contemporaries have faded away over the years, From album to album, Mystery Jets have continued to experiment and take their sound into new and exciting territories. Fuelled by a desire to try new things and keep things fresh, they have consistently evolved between albums; from the vibrant, off-kilter jumble of electro and indie on ‘Twenty One’ to the more buffed up ‘Serotonin’ to the dust-stained Americana of  ‘Radlands’. Jack describes their creative approach:

“I don’t write the songs, Blaine and Will do but I tend to arrange them. I’ve only been in the band for a couple of albums but since I’ve joined its always been very thematic and theme-based. When we made Curve On The Earth we started off wanting to make a space rock album but then we realised everyone was turning thirty and everyone felt quite weird about it and it became more about that. As we record , we create these kind of worlds. You don’t write the story and then start recording it, it writes itself as you’re doing it”

Having just unveiled ‘Hospital Radio’ this week, the band have plenty more new music on its way. Talking ahead of its release, he said “We’ve got a lot of new stuff coming soon and it’s very exciting. It’s a bit of a departure from anything the band’s ever done before. I can’t reveal too much”. He adds “You might see some of it at TRNSMT!”

Having joined the band a few years ago, Jack is in a particularly special position in that he gets to perform some of his favourite tracks as a teenager. The songs of yesteryear still play an important role in their sets and TRSNMT fans can expect some golden oldies. He says “I was 16 when the old stuff came out. Every time I play ‘Young Love’ or ‘Two Doors Down’ I kind of imagine being at school and listening to it on my ipod. It’s like meeting up with old mates when you play old music”

Anniversary shows have become an increasingly popular thing to do over the last couple of years with many artists delving back into their most popular albums, much to the delight of their fans. At the tail end of 2017, Mystery Jets left their own indelible stamp on the tradition with a five-night ‘Jetrospective’ residency at London’s Garage which saw them bring the curtains down on a massive ten years by performing all five of their albums in full. Jack looks back on it saying “It was really hard to remember all those songs. We were talking about taking it on the road for a bit but we’ve got so much new material that we’re prioritising that at the moment”

A band who continue to cultivate a cult-like fervour with every thrilling live show, Mystery Jets are quietly thriving as one of Britain’s most consistently popular bands. About to add more new material to their treasured and acclaimed back catalogue, 2019 looks set to be the year that they launch themselves back into the spotlight. What can we expect from the next few months? “Spectacular things” Jack says.