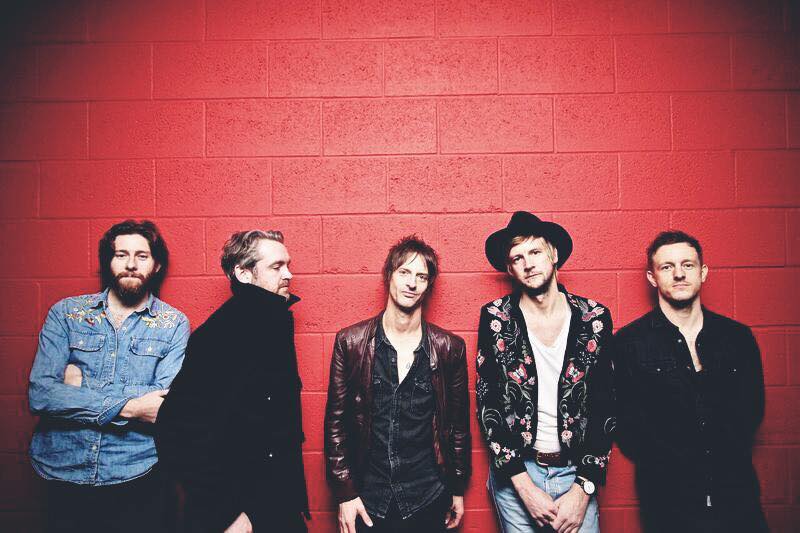 FRESH from touring with the Temperance Movement, Phil Campbell sat down for a chat with us to discuss his latest project, the Glasgow music collaboration that is The Byson Family, ahead of their debut show in December.

As a notable figure within the music scene in Glasgow, Phil’s latest project stemmed from a long-standing need to collaborate with fellow musician Christian McCabe.

“It goes back a wee bit, I’ve known Chris McCabe for about ten years, he’s been in various bands over that time and I was living away from Glasgow, down in London, for many years and came back in about 2009. At that time, McCabe and Chris Russell, who are in The Byson Family, were two of my first music friends that I met when I was back. They were big supporters and we became friends, and tried being in a band together early days, but McCabe was in a band with his brother Craig, for years. It was kind of on and off, and it got to the place where McCabe just wasn’t in the thing anymore. But at first, I was solo, before The Temperance Movement, and I was looking around for a band, we tried getting together but it never worked out. But The Byson Family, is basically Chris saying he’s wanting to work on and collaborate with different artists, he’s already worked with Emme Woods. Now, Chris has got in a guy called Mike McDaid, who has been playing bass with Paolo Nutini for the last ten years, and Alan James in on the drums, along with Chris Russell, he’s got his travelling piano bar that appeared at TRNSMT. Roughly this time last year, I did a gig solo at St Lukes, and asked I asked Chris and AJ on a couple of tunes, and shortly after this I just said to McCabe, do you want to do something a bit more serious?'”

“I think it was just beautiful what we did. We just got together and started writing some music, I had some songs, so did he and I just thought the music was lovely, he really blossomed into a great songwriter. The thing about McCabe is he kicks about town and everyone knows him, he’s all chat, but he’s under-appreciated as a musician and a songwriter, I really saw that. We did a few rehearsals and just recorded it to our phone, but the sucker was I was just going into record with The Temperance Movement, and I had to concentrate on that. Just at the end of The Deeper Cut tour, it had been a year since I heard what we had done in those rehearsals, and I has planned a solo gig around about Christmas time at St Lukes, and thought we should get together, let’s play what we wrote, it needs to be played and we need to do a gig. It’ll be The Byson Family’s first outing.”

In the run up to their debut gig at Glasgow’s St Lukes on December 18th, Phil has found inspiration from some other Glasgow bands channeling the collaborative rock n roll sound.

“My head has been turned a lot by Harry and the Hendersons, I love them. I saw them play at King Tut’s not so long, I thought they were American, they sound like Fleet Foxes or something. I got chatting to the guys after, I love them, they are just wild as fuck. Those guys and After the Gold Rush by Neil Young has been on an awful lot, it’s the harmonies we are getting from them. McCabe and Chris Russell are brilliant singers, and Russell is one of the best piano players I’ve ever heard in my life, it is just a pleasure to sit and play music with them. We need great harmonies on the great choruses, it’s lovely.”

“There’s a lot of space in the music, being not full-on rock. It takes me to where I was before The Temperance Movement, a stand-up singer with an acoustic guitar, it’s a bit more dynamic, with a softer and more melodic side to what I was doing. It really really works with this group. It’s something different and I’m stepping out my comfort zone”

Phil also offered a fans a glimpse into what they might expect from The Byson Family’s debut outing.

“You’re going to come and you’re going to feel a great sense of celebration, for the time of year it is and see some of Glasgow’s best musicians and songwriters. We’ve got Farrowhawk on, there’s a guy who’s just came up, a real street performer and a lovely songwriter, Emme Woods too, she’s playing with her full band. It’s going to be a real rock n roll night, a lot of great singing, great songs and a laugh. It is going to be filled with joy.”

As for what else is coming for The Byson Family…

“We are keeping our options open, we are wanting to see what everyone thinks. If we can go on from there into January, and maybe do some more stuff in the new year. It’s all a bit loose at the minute, it has really been brought together for a shared love of music and songwriting, which I have always really sought after living in Glasgow. My band live in London, it has become a bit of a business, but this has been great to connect with other Glaswegians and share the same love of music.”

Tickets for Phil Campbell & The Byson Family at St Lukes on December 18th are on sale now.