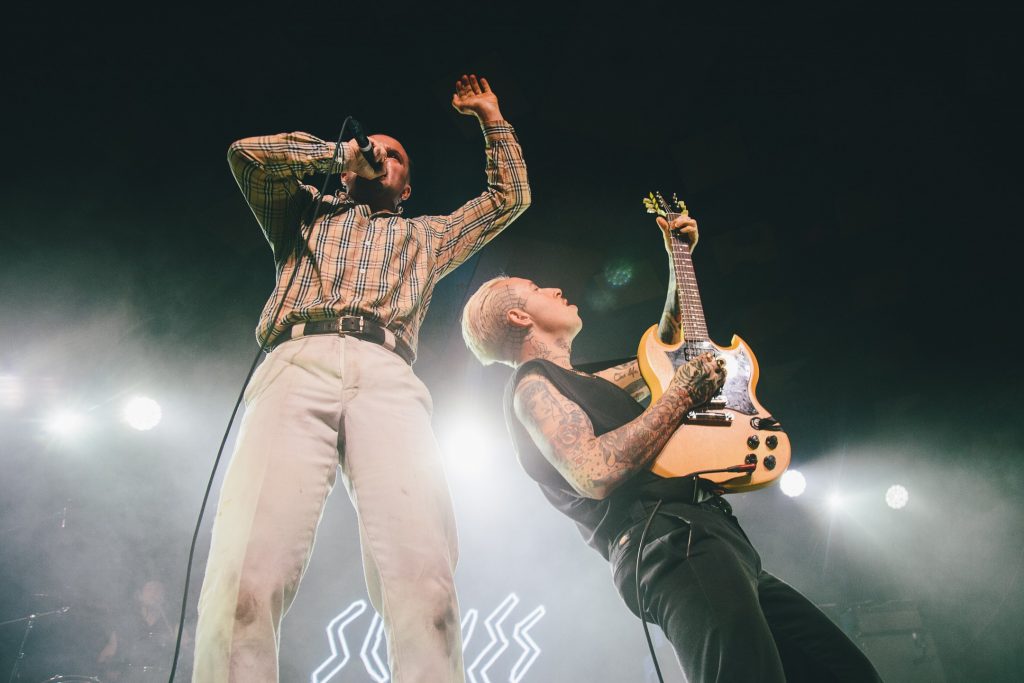 AHEAD of their return to their beloved Glasgow, Tenement TV caught up with Slaves guitarist Laurie Vincent, to chat through the band’s relationship with Glasgow, politics, fatherhood, sharing a stage with Foo Fighters and more.

Having taken a short break from the on the road lifestyle and festival madness to focus on fatherhood, Laurie admits getting back on stage has been incredibly rewarding.

“It’s good, it feels nice to be out and getting that sort-of immediate fan face-to-face recognition, there’s nothing like it. The response has been huge. You sort of go away for a while and you almost forget how many people come out to see us, it’s humbling every time.”

Known for euphoric and engaging live sets, Slaves’ interaction with their hardcore fanbase has been a focus of the band since their earliest shows.

“Communicating with the audience at all times. We are always interacting directly with them, and I think that is something that we’ve kept from day one to now, bringing new audience into the performance and making them feel like they are a part of it. Everyone being up on that same level.”

With a sense of realness and honesty to their songwriting, Slaves often find themselves picking elements of everyday life to build their sound and songs

“Everyday life is always a big inspiration, for both of us. Whether it is playing drums with my son or what you see out on the street, whatever comes in front of our eyes has always been a source of inspiration. The doomsday vibe of the world at the moment is also somewhat unignorable, there’s a lot to be inspired by and a lot to be pissed off about and a lot to be happy about. We live in confusing times.”

“Anger and that feeling of civil unrest and disobedience, I think we do it in a very safe space, channel your aggression and anger in a positive light. I think coming to one of our gigs is a personal expression of sort of unrest. Then when it comes to writing, it’s a constant source of inspiration. You turn on the TV and politicians have failed us and I think it’s obvious to everyone that the system needs a reboot.”

“Joe Talbot from Idles, without a shadow of a doubt! He should take that role immediately”

Since their earliest shoes in Glasgow, the band have felt welcomed by the musical vibrancy of the city, which has seen them climb to bigger venues and more unbelievable shows.

“Unbelievable, since the first time we played King Tut’s, the city opened its arms to us, all the way up until headlining 2 Barrowlands. It’s been a rollercoaster with Glasgow and it is definitely one of our surrogate homes now.”

Slaves return to Glasgow on August 17th for Summer Sessions at Bellahouston Park, sharing a stage with bands they have been fans of for years.

“I grew up watching Dave Grohl on TV with Queens of the Stone Age, Nirvana or Foo Fighters, he’s an absolute god. Then I spent my early years going to see Frank Carter with The Gallows, I must’ve seen him about five or six times in like the space of a year. Both of them have been massive influences on me as a musician.”

With the Foo Fighters setting the barrier incredibly high over the years for stadium-sized rock bands, Laurie admits there is a certain surrealness about taking to the stage before them at Summer Sessions this year.

“It’s pretty surreal… this is going to be the third time we’ve played with them, I now feel even more confident to try and sneak in and have a good chat, I’ve met Dave a couple of times but I really want to get in there this time, and maybe give him my number.”

Relishing in fatherhood, Laurie tells fans to expect some “Good old-fashioned family fun” form their Summer Sessions set, but also to “expect the unexpected” when it comes to new music.

And for Slaves fans, Laurie offers one final piece of advice.

“If you want something hard enough, anything is possible. Don’t settle. Push for the best. Be your best self. That’s all I really want people to do in life. Don’t live unhappy.”

Tickets for Glasgow Summer Sessions are on sale now.

TTV TALKS: The Dunts talk Glasgow, their journey and more