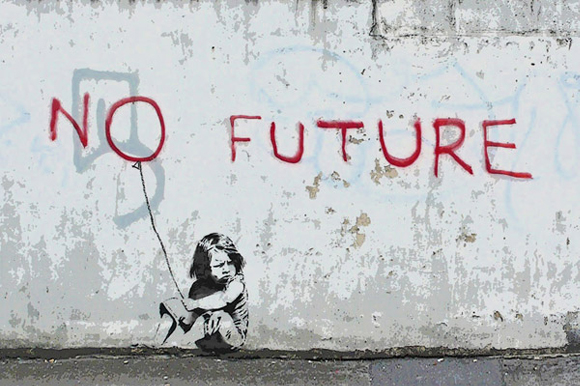 The startling suggestion was made this afternoon by sources close to Il Cartello, the Italian online cultural magazine.

The band are currently four dates in to an extensive UK and European tour, having played two sold out shows in Glasgow at the weekend and Dublin last week. A new album seems to be in the pipeline, their first since 2010’s ‘Heligoland’, after the launch of a new app, designed by Del Naja, called ‘Fantom’, which features new music from the group. The app includes fragments of four new songs (‘Dead Editors’, ‘Ritual Spirit’, ‘Voodoo In My Blood’ and ‘Take It There’).

Del Naja was a graffiti artist long before becoming the “creative director” of sorts of Massive Attack, and is held in high regard as one of the pioneers of the stencil graffiti movement, helping to bring hip-hop and graffiti culture to Bristol in the 1980s. His work has been featured on all of Massive Attack’s record sleeves to date.

Del Naja and Banksy are said to have exhibited together at shows in the past, with Banksy citing Del Naja as a big influence on his work. The artist provides the foreword to the tome ‘3D & the Art of Massive Attack’, released in August 2015, which reads… “When I was about 10 years old, a kid called 3D was painting the streets hard. 3D quit painting and formed the band Massive Attack, which may have been a good thing for him, but was a big loss for the city.”

The suggestion is then that he has, in these instances, been referring to himself, in a campaign of duplicity that has successfully kept the mystery of his true identity under wrap ever since he came to the public’s attention with his The Mild Mild West mural; which depicted a teddy bear lobbing a Molotov cocktail at three riot police, appeared on the site of a former solicitors’ office in Bristol back in 1997.

Last month Banksy spray-painted an image of Steve Jobs with a sack of belongings over his shoulder on a bridge in the Calais jungle, and as recently as Saturday, the artist is said to be responsible for recreating the iconic image from the French musical Les Misérables in London opposite the French embassy, which, if true, would obviously negate the claims, as the band were in Glasgow at the time.

However, in what may provide more weight to the theory, a look at previous tour dates for Massive Attack around the world in the past decade coincides with the appearance of some of Banksy’s work in the same places.

In 2006, Massive Attack played a concert at the iconic Hollywood Bowl venue in Los Angeles, on the 24th September 2006, 12 days after Banksy performed his infamous Disneyland stunt at the park in Anaheim, California, an hour’s drive away.

The artist’s month long residency in New York kicked off on the 1st October 2013, with the appearance of his ‘The Street is in Play’ mural. This coincided with Massive Attack’s four night residency in the city between the 28th September and the 4th October at the city’s Park Avenue armoury.

Again in the USA, six new Banksy pieces, including the famous “This Will Look Nice When It’s Framed” image, were reported to the press in San Francisco around the 1st of May 2010, with Massive Attack having performed a two night stint in the city on the 25th and 27th April, a few days previously.

Also in Toronto a similar pattern arises. Massive Attack played the city’s Sound Academy on May 7th and May 9th in 2010, the latter being the day that three new Banksy murals appeared in the city.

Finally, an iconic Banksy image of a parachuting rat was cleaned up by Melbourne Council on 28th April 2010 after residents advised them of the artistry. Massive Attack played a show in the city on the 20th March, one month previously, at the city’s Sidney Myer Music Bowl. This, 7 years after Banksy’s work last appeared in the city, in 2003, which also represented the last time the band played in the city, at the Rod Laver arena on March 11th that year.

Euan Dickinson, long term collaborator with the band, said of the rumours, “I know Massive (Attack) are pretty slow at releasing music but it would never ever happen if he (Robert) was Banksy, unless he’s pulling the wool over my eyes too.”

Maybe, as the saying goes, the truth has been hidden in plain sight.