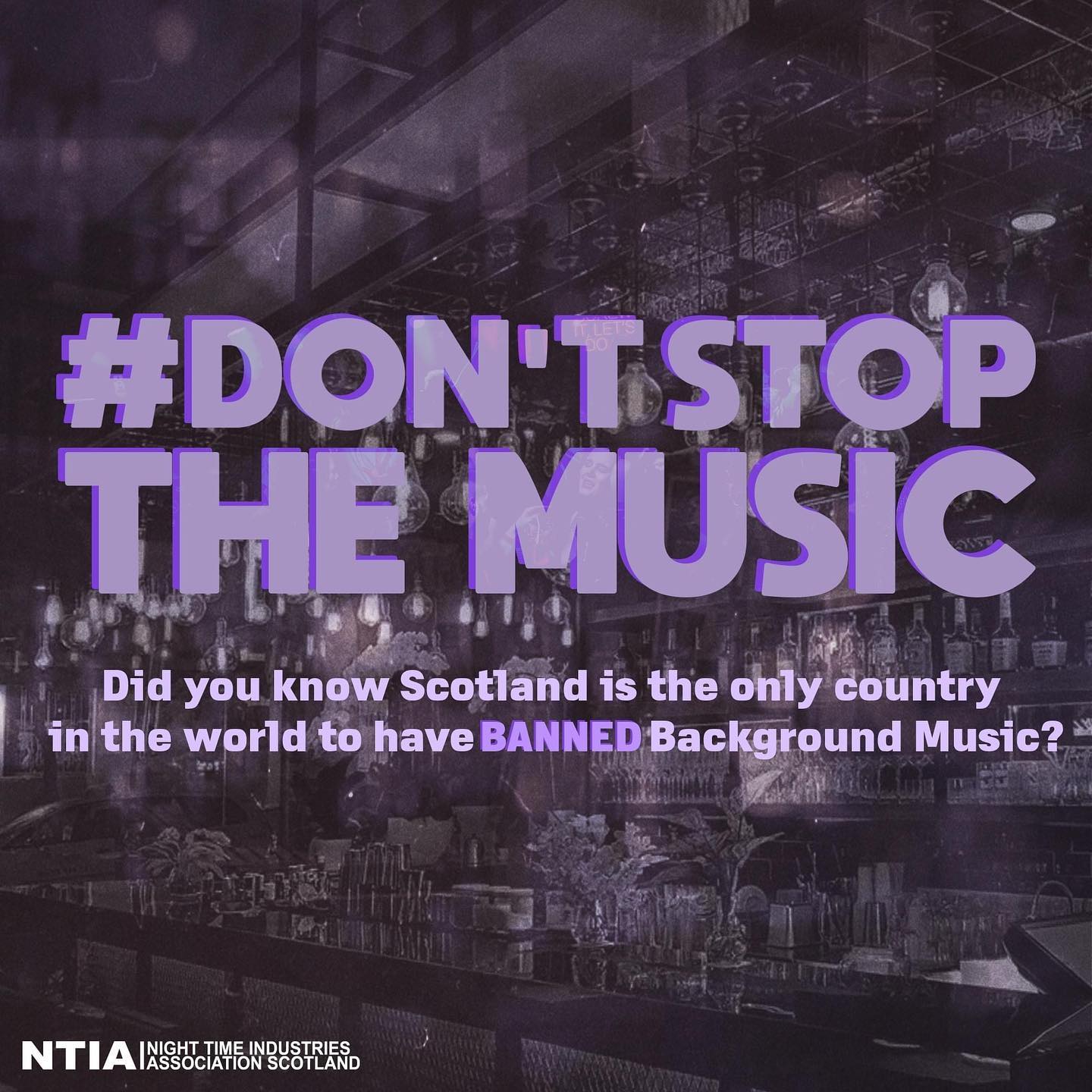 A campaign has been launched to encourage the Scottish government to lift the current ban on music and TV noise in bars and venues.

The ‘Don’t Stop The Music’ campaign is being led by the NTIAS (The Night Time Industries Association Scotland) who argue that the ban is having a severely detrimental effect on hospitality businesses due to creating a very sterile environment. Premises such as SWG3, Sub Club, The Admiral Bar, BAaD and more have all spoken out as they fear it could lead to the final nail in the coffin for Scotland’s struggling hospitality sector.

Scotland is the only country in the world to have imposed such a ban. Since the ruling was instated on 14th August, there has been a downturn in trade of 20 per cent according to trade body The Scottish Beer and Pub Association.

Organisers have argued that the ban on music fails to achieve its desired outcome of reducing viral transmission through aerosol emission – droplets expelled through the mouth during actions such as talking, shouting and singing.

They insist music creates a welcoming environment and would boost the atmosphere to already struggling venues.

NTIAS have launched a social media campaign with the hashtag #DontStopTheMusic asking people to post their favourite songs to social media to show support for their efforts. City venues such as SWG3, Firewater, McChuills and more have all voiced their support.

Michael Grieve, Chair of NTIAS said, “The total ban on background music is having a severe effect on many hospitality businesses leading to completely sterile environments which some have likened to visiting a library.

“It seems completely disproportionate relative to other settings and whilst our industry is totally committed to the serious public health imperatives which the Scottish government is focused on, our already damaged sector is in serious danger of being permanently wiped out unless this ban is removed.”

SWG3’s Andrew Fleming-Brown said: “The most recent announcement from the Scottish Government has been received by the sector as another huge setback. We are already operating within very challenging guidelines and now, Scotland is the only country in the world to ban background music, which is the kiss of death for ambience.

“If we want to succeed in controlling the spread of Covid, we must create controlled environments for young people to socialise. It’s the only way we will put a stop to illegal raves and unlicensed music events, which pose a very real risk to those attending and their families. With the right planning and measures, and a realistic roadmap, night time venues are capable of reopening safely.”

A Scottish Government spokesperson said: “We don’t want the restrictions in place for any longer than is needed, but the measures are in place for good reason: the advice remains that hospitality premises should have no background music or volume from TVs because of the increased risk of transmission from aerosol and droplets when people raise their voices.

“This measure is being kept under review.”

SCOTLAND IS THE ONLY COUNTRY IN THE WORLD TO BAN BACKGROUND MUSIC DURING THE COVID PANDEMIC Night-Time Industries Association Scotland (NTIAS) Launches the #DontStopTheMusic Campaign – to fight for an end to the background music ban. The campaign hopes to raise awareness around the ban by calling on people to share their favourite song of all time along with the #DontStopTheMusic hashtag #NicolaSturgeon #FergusEwing #FionaHyslop #Freedometodance #Savenightlife #Letusdance

Please join the campaign to end the bizarre ban on background music in Scottish hospitality!⠀ ⠀ Unbelievably, Scotland is the only country in the world to completely ban music!⠀ ⠀ Despite repeated requests for the scientific basis to justify the ban, there has been total silence from the Scottish Government. No measurements have been produced anywhere to substantiate the effectiveness of the ban.⠀ ⠀ Stand with the NTIA @savenightlife in the fight to end the background music ban by sharing your favourite track of all time along with the #DontStopTheMusic hashtag.⠀ ⠀ #NicolaSturgeon #FergusEwing #FionaHyslop #Freedometodance #Savenightlife #Letusdance.

Joesef, The Snuts + Dylan Fraser among new acts to feature on FIFA Soundtrack alongside Dua Lipa and Disclosure