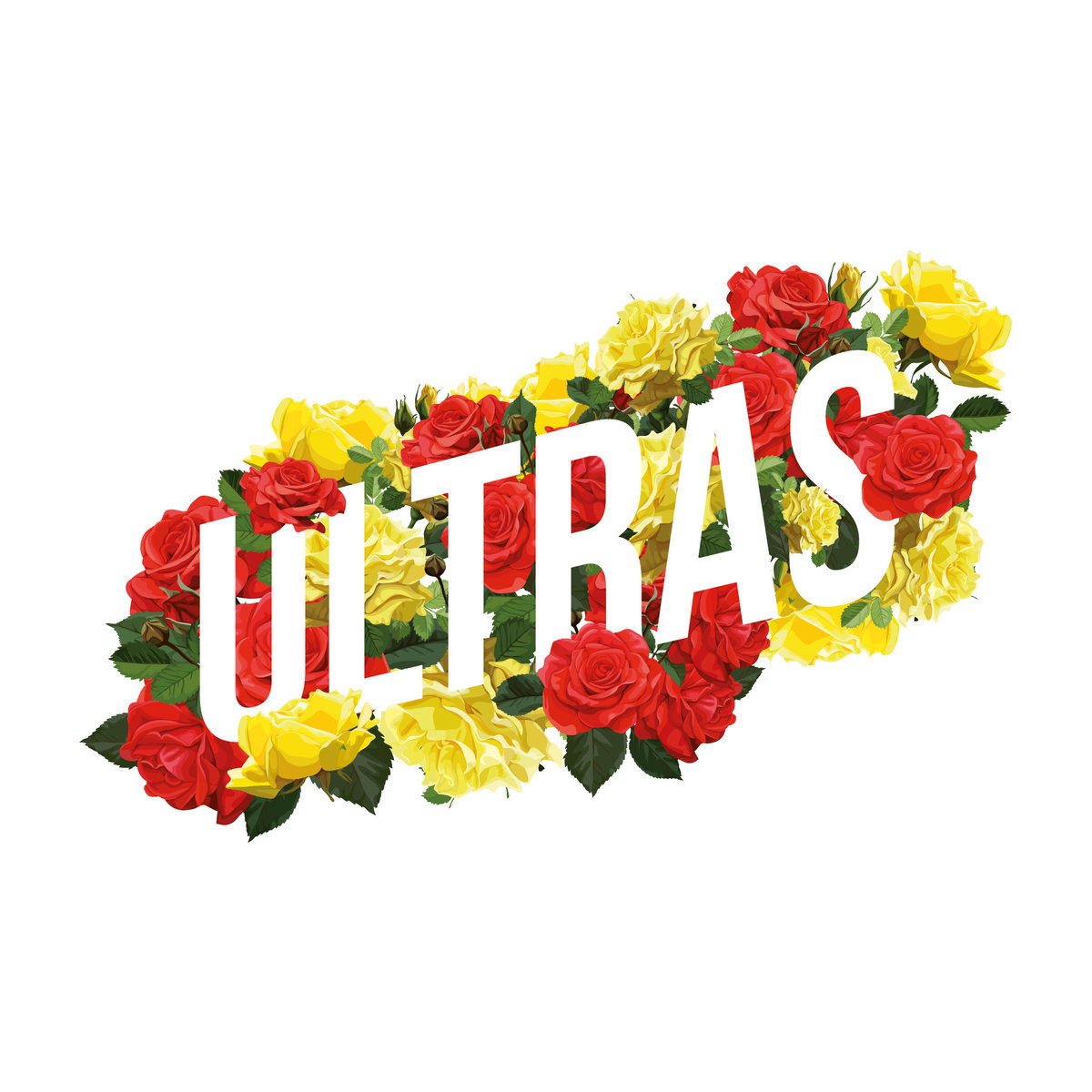 HONESTY and inventiveness are two commodities that are in short supply in today’s world but they are attributes that Glasgow’s ULTRAS have in abundance.

Creating an album that takes an in-depth look at the human psyche with a particular emphasis on its intricacies, ingrained attitudes and animalistic tendencies, Gav Prentice has proven himself to be among the most eloquent lyricists this nation has to offer and what they’ve delivered is a truly awe-inspiring body of work that unrepentantly demands repeated visits. Set to be released tomorrow via Instinctive Racoon/Hello Thor, we’re delighted to have the frontman debuting the album on TTV alongside his own annotations on how each track came about.

All of the songs on the album are about violence in one regard or another, so I thought it was important to have some level of self-awareness and humour running through it too, or it would all be a bit much. The slowed down voices on here are either repeating horrendous nonsense that’s been said to me in the past about my career or giving voice to some of my worst fears about it. The reaction seems to be laughter from most folk which is good, rather than actually seeing it as a practical guide to making it in the business. The phrase “play the blues” repeated like that is kind of lifted from a Frank Zappa live album, where Ringo Starr shows up and tells him that at the start, which I always thought was hilarious.

The original title for this song was ‘ULTRAS’, and it brought into focus exactly what this project was going to be, so I took that name for the band/collective/album rather than just the song, but it still sums up a lot of what I’m trying to do. I wanted the most emphatically hip-hop beat I could make, with the biggest guitar sound I could manage, which was helped no end by the producer Joe Cormack. Lyrically it’s a big mashed up mess of conflicting emotions about standing your ground, patriotism, shame and pride, I wanted people to be unsure if I was beating a drum for some kind of movement or trying to undermine it. It’s like it’s almost a protest song, but one that already knows that the cause has lost.

This was produced by Gal and it’s the only track on the album that’s a faithful capture of the ULTRAS live band – Roy Mohan Shearer is doing these really oddly timed fills around the central electronic beat and Matt Clark’s bass is wandering all over the place. It’s an anti-imperialist song written as a reaction to the awful revisionist accounts of the First World War which started being chucked around during the year of its 100th anniversary. At the time David Cameron was trying to make out that this industrialised slaughter of working class people was some kind of noble cause for freedom, so that he looked patriotic while still arguing against Brexit. Worked well eh?

I think I’m right in saying that all of the sounds in this are analogue, no digital iPad beats like I usually use, and Julian Corrie, aka Miaoux Miaoux, played in a lot of the synth and drum parts in as part of his production. This is basically a folk song, an update on the John Barleycorn myth, who is a personification of alcohol that Burns was keen on writing about, but it’s the least folk sounding thing on the album. I wanted to update Barleycorn so that he was in an urban environment in the present day, I thought that would make him a feared rather than celebrated figure. He also represents the turning of the seasons (the barley growing, being cut down, then consumed) which I thought was a nice metaphor for revolution. A drunken Scottish revolution.

The character in this song is grappling with a culture that expects you to stay young forever as a consumer, but needs you to be a good responsible worker at the same time. I’ve always been fascinated with the warzone of a town centre on weekend nights, but the way the entire working week is set up makes it an inevitable disaster. Jonnie Common and I explored our shared love of 90s hip-hop production on this one, while having to remind ourselves not to make it completely TLC or R Kelly at times. The intro beat is the sweetest sounding thing on the record. He also plays that great pulsing synth bass on there. He’s a real bag of tricks that boy.

These intermission parts are inspired by the skits on hip-hop albums and mixtapes. Often you’ll get the rapper’s friends calling him to tell him he’s doing them proud, but sometimes it’s abuse, so I thought it’d be funny to record some abuse to myself. Self-abuse, if you will.

When Over the Wall split up, Ben Hillman and I were adamant that we’d still find ways to make music together. This is for all intents and purposes an Over the Wall song. I wrote it, and with not much of an idea for arrangement took it to Ben, and we worked on it sporadically and slowly. He plays the lovely keys on there too. Sean Cumming (from John Knox Sex Club) heard us play this live and said he’d like to sing on it, which I was delighted with, and his harmonies take off into their own thing so much that it’s really two lead vocals on there. It’s lyrically about the expectations of masculinity on the Scottish working class male. When I was a kid I thought of myself as a failure in that respect, and carried around all this shame that I wasn’t enough of a man. But then being a failure in terms of having a propensity for violence has probably made it easier for me to assimilate in the larger society outside of where I grew up than for a lot of the people there. There’s a tragedy and a comedy in that which I can’t seem to get away from.

This was inspired by seeing an old guy handing out leaflets for the BNP in Glasgow. He was immaculately turned out and obviously trying to keep the head in the face of open hostility, including from me. I then just imagined what his life was outside of this bizarre activity of spreading hate on the streets, and imagined what he would say to someone like me for even trying to guess where he was coming from. I played all of the parts on this one but it was recorded by Gal in a way that makes it feel very ‘live.’ I came up with the synth bass line on my iPad while crossing The Minch on the boat to Stornoway, and my girlfriend though it would end up being a song about the highland landscape, but that’s not really my thing!

This is the one song on the album that is pretty accurately autobiographical, and because of that it’s the one track I wanted to produce myself, which I did in my own flat, so it’s quite rough and ready but I thought that would it help it seem like a confession. I thought it was important that there was at least one moment where you really heard my own perspective and history with the culture of violence as I saw it. Ben plays the trumpet solo on there. The lyrics are quite literal so I won’t go into it, but just to say that all of the street names are real.

I wasn’t particularly brought up with religion, but I still always had this terrible fear of God as a kid, as this potentially violent force that could see you all the time, it can be a really frightening idea. And I’ve always used religious symbolism in my songs, partly just because it’s the best symbolism. Joe Cormack produced these next two tracks, and they have big sounding guitars, but I’m very fond of the rhythms in them too. Joe’s good at entertaining what might first seem a silly idea, and taking it to its conclusion for better or worse, which results in these really intricate layers of little things you wouldn’t notice at first.

This really isn’t so much about the tories as the kind of individualism behind tory ideology, and the various ways that can make us react, negative or positive, and like with This Is Where I Fall I mash all those feelings together in this. The old certainties about employment, like a long-term contract or being able to rely on a pension or a union, are continually being chipped away to nothing, and that has a massive psychological effect on workers who inevitably start blaming themselves for not doing well enough, when actually the safety net that the previous generation enjoyed has been deliberately pulled away by that generation to ensure their own comfort. It’s a very angry song. It was written the day after the Scottish independence referendum while British Nationalists were attacking people in George Square. I was sick of trying to make rational arguments and just wanted to get out all of the contradictory things I was feeling at once. At the same time it’s probably the most uplifting sound on here.

This is essentially a very simple folk song played on Matt’s six-string bass. I wanted to connect the idea of a sort of personal violence, like easily getting into fights or generally having a hateful worldview, with the outcome of that when it’s multiplied in society, namely war. The recent apparent surge to the right in Europe and America is still something I don’t completely understand, but you could read this album in some ways as an attempt to understand it, while still clearly having a point of view against it. But it’s also funny in places. And uplifting. I swear to god.

Listen to the album now below and purchase it now via Instinctive Racoon’s Bandcamp. For those looking to catch the band live, they’ll be hosting a very special launch gig for their self-titled debut at Glasgow’s The Hug And Pint on Friday 5th May with tickets available here.