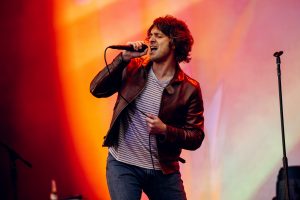 THE Scottish music industry will unite in the legendary Barrowland Ballroom this Saturday 5th November to raise vital funds for music therapy charity Nordoff Robbins and celebrate some of the country’s homegrown heroes at the Specsavers Scottish Music Awards. Nordoff Robbins has this week announced that Rod Stewart, Paolo Nutini, Gerry Cinnamon, Wet Leg, Craig Logan and Rianne Downey will complete the illustrious line-up of nominees being recognised at this year’s ceremony which promises to be among the most special yet.

The newly-announced nominees are set to join forces with Lewis Capaldi, Altered Images, The View, Dylan John Thomas, Ewan McVicar, Gun, Peat & Diesel and Tamzene for the annual fundraiser of Nordoff Robbins, who break down barriers through the power of music, creating space for people to express themselves and connect with others. Rising star Rianne Downey is also set to perform for the world-renowned Glasgow crowds at the ceremony’s second year in the Barrowland Ballroom.

Donald C MacLeod MBE, Scottish Fundraising Chairman for Nordoff Robbins, said: “We are thrilled to be recognising some of the country’s finest musical talent at this year’s Specsavers Scottish Music Awards whilst raising crucial funds for Nordoff Robbins, providing wider access to music therapy that can offer real inclusion and belonging. We are delighted to once again be working with Specsavers to curate deserving nominees and exclusive live performances with the hope that funds raised at this year’s ceremony, which we expect to be among our best yet, matches the incredible generosity of the Scottish music community in previous years.”

Rod Stewart, one the best-selling artists of all time and who is this year nominated for the Specsavers Outstanding Achievement in Music Award, said: “In all my days I never ever dreamt I’d be receiving an award from the land of my Father. This will be undoubtedly an emotional evening for me, I just wish my dear old Dad (a Hibs supporter by the way) was here to enjoy it. Thank you so much everyone.”

Arlene Stephenson, Specsavers’ Scottish Chair, said: “For a fourth year, Specsavers is proud to be the headline sponsor of Scottish Music Awards, and we are very thrilled to be presenting the Specsavers Outstanding Achievement in Music Award.

“We firmly believe in the importance of Nordoff Robbins’ work in Scotland and beyond, and are delighted to continue providing support for their provision of music therapy sessions through our sponsorship of the Scottish Music Awards. We look forward to returning to the iconic Barrowland Ballroom for another show stopping event following last year’s success.”

Back with a bang, Paolo Nutini is up for both Guitar Guitar’s Best Album Award and Ticketmaster’s Best Live Act Award ahead of his five highly anticipated shows at OVO Hydro later this year.

Isle of Wight duo Wet Leg, following the release of their self-titled debut album unifying twelve tracks about being twentysomething, are nominated for SWG3’s Best UK Artist Award. They said: “It’s such an honour to be nominated for the SWG3 Best UK Artist Award, especially considering all the admirable work they do for Nordoff Robbins. Our music developed during lockdown when we were all struggling with the newfound uncertainty of the world around us, so we know what it’s like to use music as a tool for healing. It’s great to be involved with an organisation like Nordoff Robbins that recognises the true power of music to help people connect and communicate.”

Craig Logan, who began his career as bassist in the pop band Bros and is now nominated for the Go Radio Music Industry Award, said: “I am truly honoured to be nominated for the Scottish Music Industry Award. It’s quite humbling to be recognised for something that you do out of love. My career in this industry has taken many twists and turns, helping me to evolve and understand the importance of being able to adapt. (A relevant lesson in today’s market, more than ever!) Working closely with the artists, helping them develop and succeed is not a job, it’s a passion. Thank you to the artists and my team. This is for you all too!”

Initially making a name for herself by posting cover songs online including “Caledonia” and “Sunshine on Leith”, and now gaining attention for her own material, Glasgow-based Rianne Downey is nominated for Tennent’s Breakthrough Award. Ahead of her performance at Specsavers Scottish Music Awards, she said: “It’s an honour to be nominated for this award. The winners in the past as well as being extremely talented, have all went onto amazing things so to be viewed in the same light as them means the world to me especially this early in my career. I can’t wait to see what comes next. I’m looking forward to a night filled with great company and most importantly, great music!’

In alphabetical order, the full list of nominees for the 2022 Specsavers Scottish Music Awards are:

Fundraising from the event made a miraculous recovery in 2021 compared to 2020, when the ceremony was forced online due to COVID restrictions. Last year, with income forecasts down 40% compared with pre-pandemic levels, the generosity of Specsavers Scottish Music Awards donors exceeded all expectations. £180,000 was raised from the evening via online donations, live auctions and ticket sales, ensuring Nordoff Robbins is able to continue providing its vital services across the UK.

The event made its Barrowland Ballroom debut last year with performances from Wet Wet Wet, Brooke Combe, Amy McDonald and Bow Anderson. Hosted once again by broadcaster and long-time supporter of the charity, Edith Bowman, the Specsavers Scottish Music Awards have also partnered with Go Radio for 2022 where music fans will be able to access exclusive interviews during the build up to the ceremony.