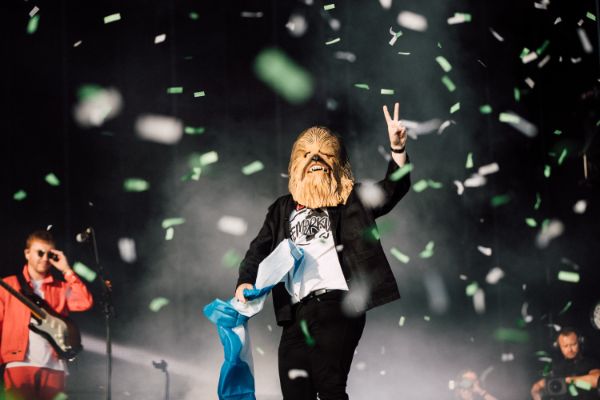 Following the original top bidders for Lewis Capaldi’s now infamous Chewbacca mask from TRNSMT Festival unfortunately pulling out, Scottish star Paolo Nutini has saved the day by purchasing the mask and donating £10,000 to Tiny Changes. Paolo Nutini now has plans to raffle the mask to raise even more funds for the incredible Tiny Changes charity.

Paolohas now set up a ‘text to enter’ competition to give the Chewbacca mask away whilst raising more money for Tiny Changes. From 9am on Monday 29thJuly, fans can be in with a chance of winning the Chewbacca mask worn and signed by Lewis Capaldi at TRNSMT. All they need to do is text TCto 84902. Texts cost £1 and all money goes towards Tiny Changes. The competition will close at midnight on Monday 5thAugust 2019.

The original auction was set up by a TRNSMT festival staff member who lent Lewis his Chewbacca mask for his now-legendary walk on stage at this year’s show.

After Noel Gallagher said that Lewis should ‘enjoy his 15 minutes’ of fame as well as calling him ‘f***ing Chewbacca’, Capaldi changed his social media profile picture and name to ‘Chewis Capaldi’.

Then,live on the TRNSMT Main Stage on Sunday 14thJuly, he walked on to a tongue-in-cheek video montage wearing the Chewbacca mask. Taking it all on the chin and making everybody laugh while doing it, Lewis also gave a shout out to Noel by covering ‘Don’t Look Back In Anger’ – changed to ‘Don’t Chewback in Anger’. Delighting thousands of fans with his set, the Scottish superstar put on a huge performance packed with hits from his debut album ‘Divinely Uninspired To A Hellish Extent’ including ‘Grace’, ‘Hollywood’, ‘Bruises’, ‘Hold Me While You Wait’ and ‘Someone You Loved’.

Tiny Changesis a charity that support efforts to improve mental health in children and young people in Scotland, and was launched following the death of Frightened Rabbit singer Scott Hutchison in May 2018. The charity takes its name from a lyric from the Frightened Rabbit song “Head Rolls Off” (“While I’m alive, I’ll make tiny changes to Earth”).

Paolo Nutini commented: “I really wanted to find a way to help out the Tiny Changes Charity. Not only am I a big fan of Frightened Rabbit but I was lucky enough to share the stage with them on various occasions – most memorably for me on Hogmanay in Edinburgh 2017.

“Scott was such a great and honest songwriter who was not afraid to convey what he was going through in such a beautiful and honest way. People could hear and read their troubles in his lyrics and be reminded that they were not alone in how they were feeling. That really is the power of music.

“When I found out what happened regarding the money raised for the kind donation from the team at DF Concerts and Lewis Capaldi, I felt like I could help. The idea is now to give people another chance to take it home and contribute to this very important cause. Big Love”

A message from Scott’s family: “Once again we’ve been overwhelmed by the generosity of everyone who has gone above and beyond to make this happen. We’d like to thank DF concerts, Paolo Nutini and his team and of course Lewis Capaldi and his face. We hope you can all be a part of this wonderfully weird little story and get your name in the pot to win this mask. Many tiny changes can start the movement for massive changes.”

A DF Concerts spokesperson said: “Despite the original bidders pulling out, an amazing amount has now been donated to the brilliant and important Tiny Changes charity. It’s fitting that fellow Scottish singer Paolo Nutini is the one who has saved the day and amazing that fans can now get the chance to enter a raffle to win this piece of memorabilia whilst donating to a fantastic cause.”

The Scottish Album of the Year Award announce 2019 Longlist