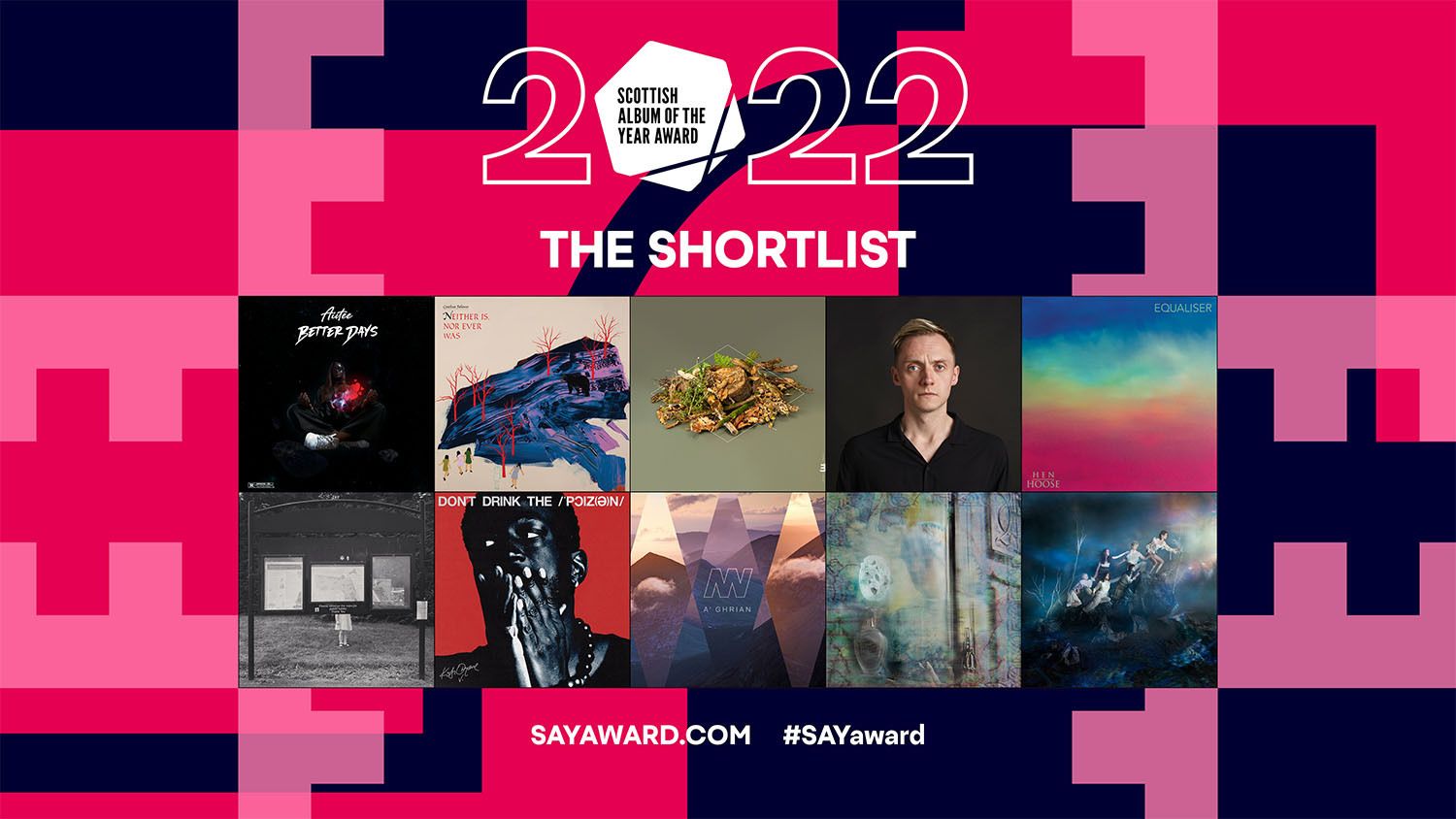 THE SAY Award– Scotland’s National Music Prize – has announced its ten-strong Shortlist, along with five Sound of Young Scotland Finalists and its Modern Scottish Classic Award Winner. The latter two were introduced last year to further SAY’s commitment to honouring Scottish music throughout time; past, present and future. Nominees and winners of these awards – as well as the main album of the year prize – will be celebrated at the ceremony’s Stirling debut on Thursday 20th October at the Albert Halls during an evening of exclusive announcements and special live performances.

The highly anticipated SAY Award Shortlist recognises ten outstanding Scottish albums of the past year and the artists who created them. This year’s record-breaking 369 eligible album submissions were whittled down to a Longlist of 20 records by 100 impartial industry nominators. Now, a panel of cultural tastemakers and industry professionals have selected nine of those to remain in the running for the SAY Award title, with the tenth Shortlisted album chosen by music fans via this year’s 72-hour online public vote. As well as the winner receiving the £20,000 first prize – one of the most lucrative prize funds in the UK –- the nine runners up take away £1,000 each as well as bespoke trophies created via The SAY Design Commission.

In alphabetical order, The SAY Award Shortlist for 2022 is:

Constant Follower  – ‘Neither Is, Nor Ever Was’

Kathryn Joseph – ‘for you who are the wronged’

Robert Kilpatrick, Creative Director of the Scottish Music Industry Association (SMIA) / The SAY Award, said: “The SAY Award Shortlist recognises 10 of the best Scottish records of the last year, firmly showcasing the strength and diversity of Scotland’s recorded output in 2022. In just two weeks time, we’ll be celebrating and championing each of these records at Stirling’s Albert Halls, with one set to take the coveted title of Scottish Album of the Year along with the £20,000 first prize. Massive congratulations and best of luck to all Shortlisted artists.

Today’s announcement also shines a spotlight on Scottish music’s exciting future as well as its inspiring past. Five young and emerging artists have been selected by a panel of former SAY nominees as finalists for the Sound of Young Scotland Award, with one set to receive a funding package worth up to £5,000 to help create their debut record. I’m also beyond delighted to see one of the most iconic (and one of my personal favourite) Scottish albums of all time – ‘Heaven or Las Vegas’ by Cocteau Twins – announced as the winner of 2022’s Modern Scottish Classic Award; chosen by this year’s SAY Award nominees, and set to be honoured at the Ceremony.

Past, present and future, Scottish music is something to be cherished, celebrated and excited about. The SAY Award offers an important focal point for us to reflect on what our musical output says about who we are as a nation, and I look forward to recognising Scotland’s ever-evolving cultural identity and the work of some of our most exciting artists at the Ceremony later this month.”

In addition to the Shortlist announcement, The SAY Award is delighted to announce its Modern Scottish Classic Award Winner for 2022 as ‘Heaven or Las Vegas’ by Cocteau Twins. Presented in association with YouTube Music, for a second year, the 20 SAY Award Longlisted artists voted for Scottish albums predating The SAY Award’s establishment that still inspire music being made in Scotland today. The SMIA assigned points to the albums each Longlisted artist submitted, and ‘Heaven or Las Vegas’ emerged as 2022’s winner, and will be celebrated at The SAY Award ceremony later this month.

Elizabeth Fraser, Lead Vocalist of Cocteau Twins, said: “What a delightful surprise!!! Thank you for expressing such heartfelt affection for ‘Heaven or Las Vegas’ and for presenting us with an award that we are thrilled and honoured to receive. Thank you so much.”

Simon Raymonde, Bassist of Cocteau Twins, said: “When I was invited to join the band in January 1984, I just knew from the first session that we wrote music together that this was going to be a special time in my life and Elizabeth and Robin could not have made me feel more ‘at home’ and I was never made to feel like the odd (English) man out. What I couldn’t have known was the impact our music was going to have, and ‘Heaven Or Las Vegas’ the subject of this wonderful accolade from SAY. Even 32 years after its release it seems to keep finding new fans, without the aid of any reunion tours, marketing campaigns or fancy reissues. It is without doubt a great privilege to have been part of this band with two of the most talented Scottish musicians of the last 50 years, for such a big part of my life, and I am still moved by the reaction that ‘Heaven or Las Vegas’ in particular continues to have. The award is humbling and I am grateful to everyone who chose this over so many other wonderful possibilities.”

The next generation of Scottish musical talent is also recognised for a second year, with the announcement of the five Sound of Young Scotland Finalists, ahead of the winner announcement at the Stirling ceremony. Supported by Ticketmaster, Youth Music Initiative and Youth Music, the finalists, narrowed down from 71 eligible submissions, include Berta Kennedy, Dead Pony, KLEO, Psweatpants and Uninvited. The winner will be decided by a diverse panel of previous SAY Award nominees including Brìghde Chaimbeul, Carla J. Easton, Christopher Duncan (C Duncan), Dave Hook (Stanley Odd), Declan Welsh (Declan Welsh & the Decadent West), Graham Costello (Graham Costello’s STRATA), Jubemi Iyiku (Bemz), Paul McGeechan (Starless), Rachael Swinton (Cloth), Stina Tweeddale (Honeyblood) and TAAHLIAH. The winner will receive a funding package worth up to £5,000 to support the creation of their debut album, including recording time at Tolbooth Stirling.

Matt Griffiths, CEO of Youth Music,  said: “We’re really proud to be backing The Sound of Young Scotland Award once again, with investment from our Youth Music NextGen Fund. Working with innovative partners like the Scottish Music Industry Association is a crucial way we can continue diversifying the future of music across the UK. Every finalist this year is a worthy winner, so we wish them all the best and look forward to seeing their creative careers develop over the years.”

Nominees across the three awards represent one of the most diverse genre spreads in the eleven years of SAY Award, showcasing Scotland’s eclectic musical landscape across time and at its best. Music fans are invited to join industry professionals in celebrating one of the most exciting nights in Scotland’s music calendar, with limited ceremony tickets available to buy via www.sayaward.com.