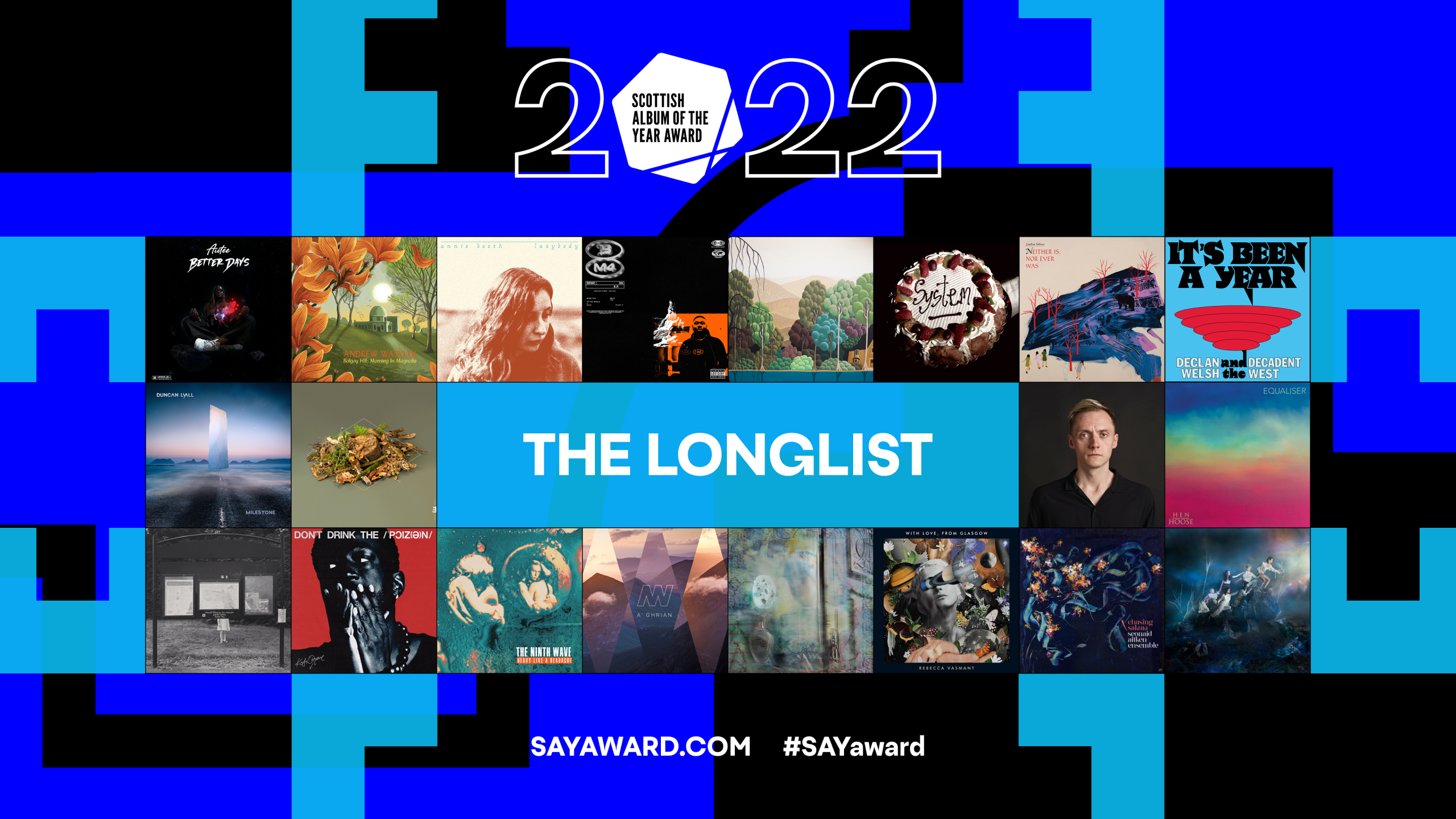 THE Scottish Album of the Year (SAY) Award – Scotland’s national music prize – today announces the twenty outstanding albums that have earned a place on the 2022 Longlist; whittled down from a record breaking 369 eligible record submissions by 100 impartial music industry Nominators. Each Longlisted album is now in the running for the coveted SAY Award title and £20,000 first prize, with the winner to be announced at The SAY Award 2022 Ceremony taking place at Stirling’s Albert Halls on Thursday 20th October. This year’s twenty-strong longlist features one of the most diverse genre spreads in the eleven years of the award, showcasing Scotland’s eclectic musical landscape and highlighting a range of subcultures and artistic styles.

The announcement comes as 2022’s host city, Stirling, celebrates with a free exhibition taking place at award-winning music venue The Tolbooth. Music fans can explore the 20 enlarged album artworks and use QR codes for an experiential discovery of the Longlist. The exhibition will provide a focal point for celebrating the records in the lead up to next month’s Ceremony where one will be announced as Scottish Album of the Year.

In alphabetical order, The SAY Award Longlist for 2022 is as follows:

As Scotland’s national music prize, The SAY Award exists to celebrate the cultural impact and contribution of our nation’s recorded output. 2022’s Longlist presents a dynamic and diverse collection of albums which spans multiple genres and showcases both established and rising talent from across the country. Despite the turbulence of recent times, the enduring impact and resonance of the album format remains. As vehicles of both self-discovery and connection with others, their power to ground, inspire and unite us is perhaps more important than ever.

As we now approach our 2022 Ceremony at Stirling’s Albert Halls next month, we look forward to championing Scotland’s ever evolving music scene and unique cultural identity; recognising the value and magic of music in our lives.”

Convener of Stirling Council’s Community Planning and Regeneration Committee, Cllr Gerry McGarvey said: “Congratulations to all the amazing artists from across Scotland that have made the longlist for this prestigious musical award.

“To reach this stage in the competition is an achievement in itself and it’s fantastic to have so many Stirling-based artists, and artists that have their roots in The Tolbooth’s Music Development workshops, in the final 20, demonstrating the area’s dynamic and diverse music scene.

“To celebrate the longlist announcement, we have created a special interactive exhibition in The Tolbooth where people can sample the best of Scottish music in 2022.

“In just over a month one of these incredible records will be recognised as Scottish Album of the Year in the Albert Halls Stirling, and today’s milestone signals the countdown is on to an exciting and inspiring night.”