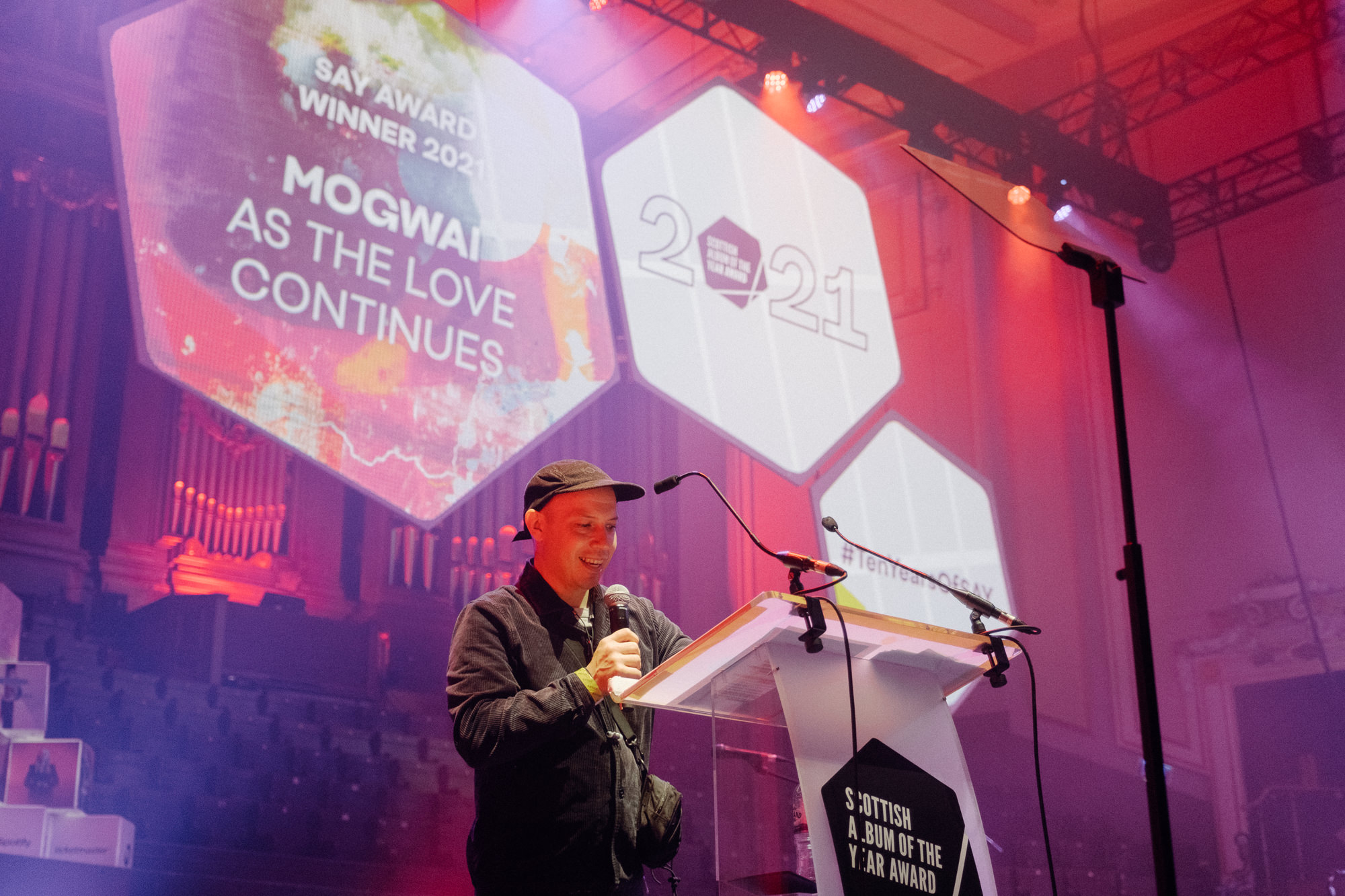 LAST night, the winner of Scotland’s national music prize, The Scottish Album of the Year (SAY) Award, was announced as Mogwai – ‘As The Love Continues’ at a stunning award ceremony in Edinburgh’s Usher Hall, as the country’s music industry reunited once more after a turbulent 18 months.

‘As The Love Continues’ is Mogwai’s tenth studio album and the band’s first SAY Award win, having been Shortlisted four times previously and Longlisted in 2015. It is their third UK Top 10 charting album and reached Number 1 in the UK album charts within the first week of its release in February 2021 amidst the COVID-19 pandemic. The album was nominated for a Mercury Prize in 2021 and now holds the coveted title of Scottish Album of the Year, with the band collecting a £20,000 prize and bespoke trophy.

Collecting the prize, Stuart Braithwaite said, “I really was not expecting this, I have not thought of anything to say other than thank you and I wish I’d got steaming! This has been a really mental year for the band and this is just another thing we never thought would happen. I want to thank everyone who has bought and played the album, I’d like to dedicate this to Mick our booking agent who passed away last week. I’d like to thank everyone, the SMIA and you all for being here. This is nuts!” 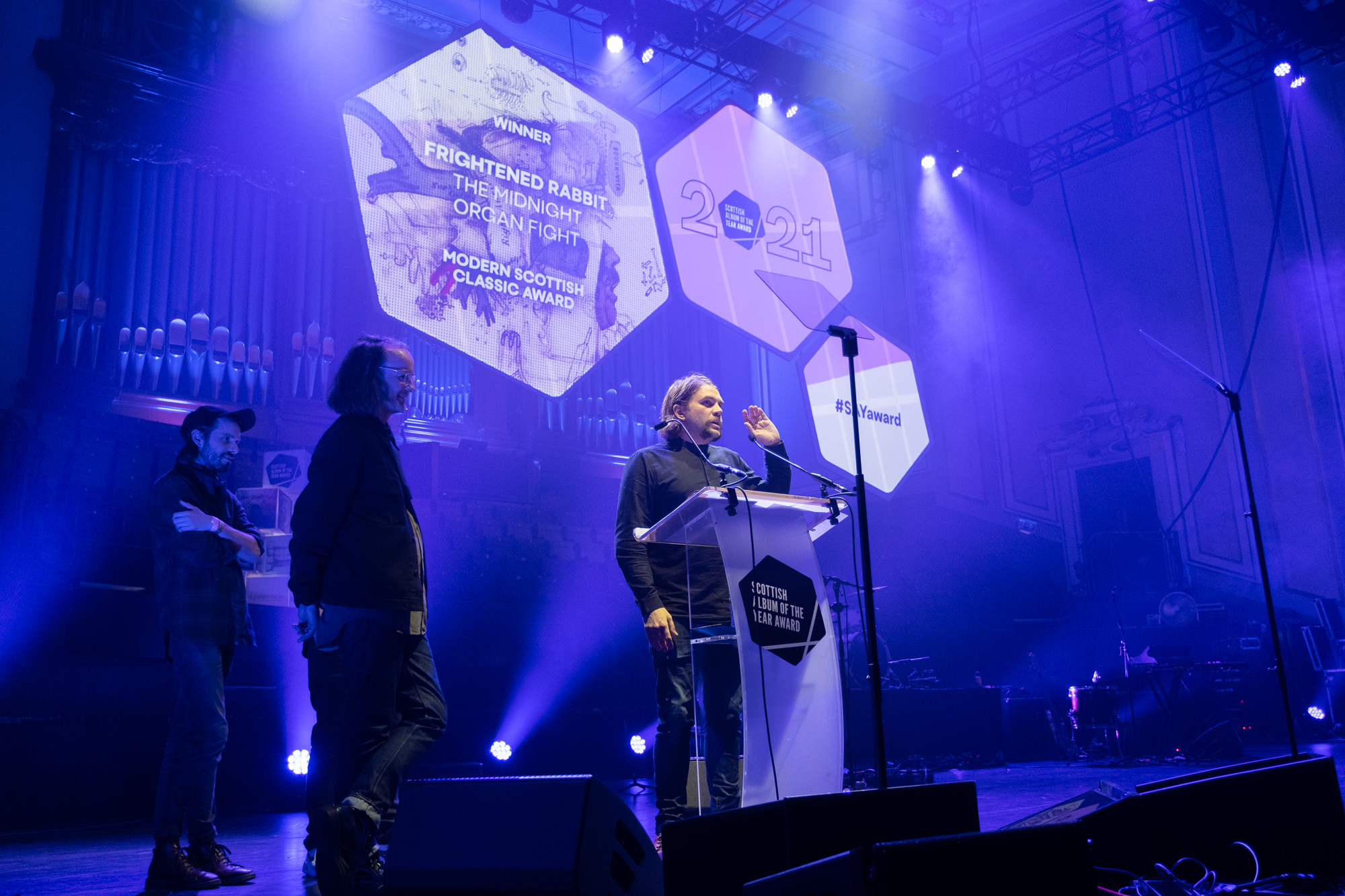 Celebrating 10 incredible years of The SAY Award, the event recognised Scotland’s musical past while looking to the future, awarding Frightened Rabbit – ‘The Midnight Organ Fight’ the Modern Scottish Classic Award while LVRA was named the Sound of Young Scotland. With special performances from 2020’s winner Nova plus Sacred Paws, Bemz and more to commemorate each previous SAY Award winning album, the ceremony was a poignant mix of reflection, celebration and recognition of the strength and diversity of Scotland’s musical output.

This year’s inaugural Modern Scottish Classic winner was chosen by 2021’s Longlisted artists as an album from Scotland’s past that still inspires music being made today. The winner was ‘The Midnight Organ Fight’ by Frightened Rabbit. Presenting the award was Sandra Gordon (Fundraising Officer, Tiny Changes) and James Graham (Twilight Sad).

Sandra Gordon said, “It is such an honour for us to stand here tonight and to present this award to our friends and to celebrate an album that means so much to us and to many of you here tonight. I’m feeling really emotional so bear with me! This album and the people who wrote it enriched our lives and soundtracked the very best of our lives. ‘The Midnight Organ Fight’ is the most honest and heartbreaking record that I know. This record should be the benchmark of the Scottish Album of the Year Award and this level of songwriting reflects years of hard work. It’s more than just a record, it’s made us feel less alone and it saved many of us. And built a community of FRABBITs who continue to do really brilliant things in Scott’s memory.”

James Graham said, “I’m honoured to be here. My life wouldn’t be the same without the amazing human beings who created this record. Frightened Rabbit and this album changed my life for the better and I know I’m just one of thousands connected with like minded souls across the globe, but they never forgot their roots and where they’re from. I remember being in Scott and Grant’s flat a couple of days after they mixed the record – he pressed play and from the opening guitar lines of ‘The Modern Leper’ I knew my friends had created something very special. Frightened Rabbit didn’t make music to win awards, the biggest award we can give them is to listen to their music. Imagine introducing ‘The Midnight Organ Fight’ to someone new and the possibility of them finding their new favourite album. Pass it on – make tiny changes like Scott said. ‘The Midnight Organ Fight’ was said to be a breakup album – I’ve never seen a breakup album bring so many people together.”

As the band collected the award, Grant Hutchison said, “I don’t why you’re clapping for us we didn’t write any of it! All of us can come at it from the same place that all of you can – this was and is Scott’s album. These are his words and they should be shared by all of us. It’s amazing to have an album that’s 13 years old and still inspires artists today, because it still inspires me everyday. We recently put a book of Scott’s lyrics out and I listened to every single song and read every single lyric and was still like – f*****g hell. He got all the talented genes. This shouldn’t be a sad and sombre remembrance award, it’s not what he would have wanted, he would want us to get drunk! He would want us to sing and dance and get sweaty.

Also how brilliant is this – Scotland has a music award ceremony that can fill the Usher Hall! 10 years ago I was at the first one in Govan and everyone was like ‘what even is this? we’re being told we’re good at what we do?!’ which in Scotland we’re not used to! SAY Award – well done and thank you for everything that you have done for Scottish music and artists, especially after the year that we’ve all just had.

Thanks to Scott, what a f*****g guy. He’s already thinking that I’ve spoken for too long so I’ll leave it there and if everyone here tonight could do one thing – if you could text someone in your phone book who might need to hear from someone. Just ask them how they are or if they want to meet up. Just say hi, it might change their path. Thank you to all of you, you’re all amazing and this means so much to us.” 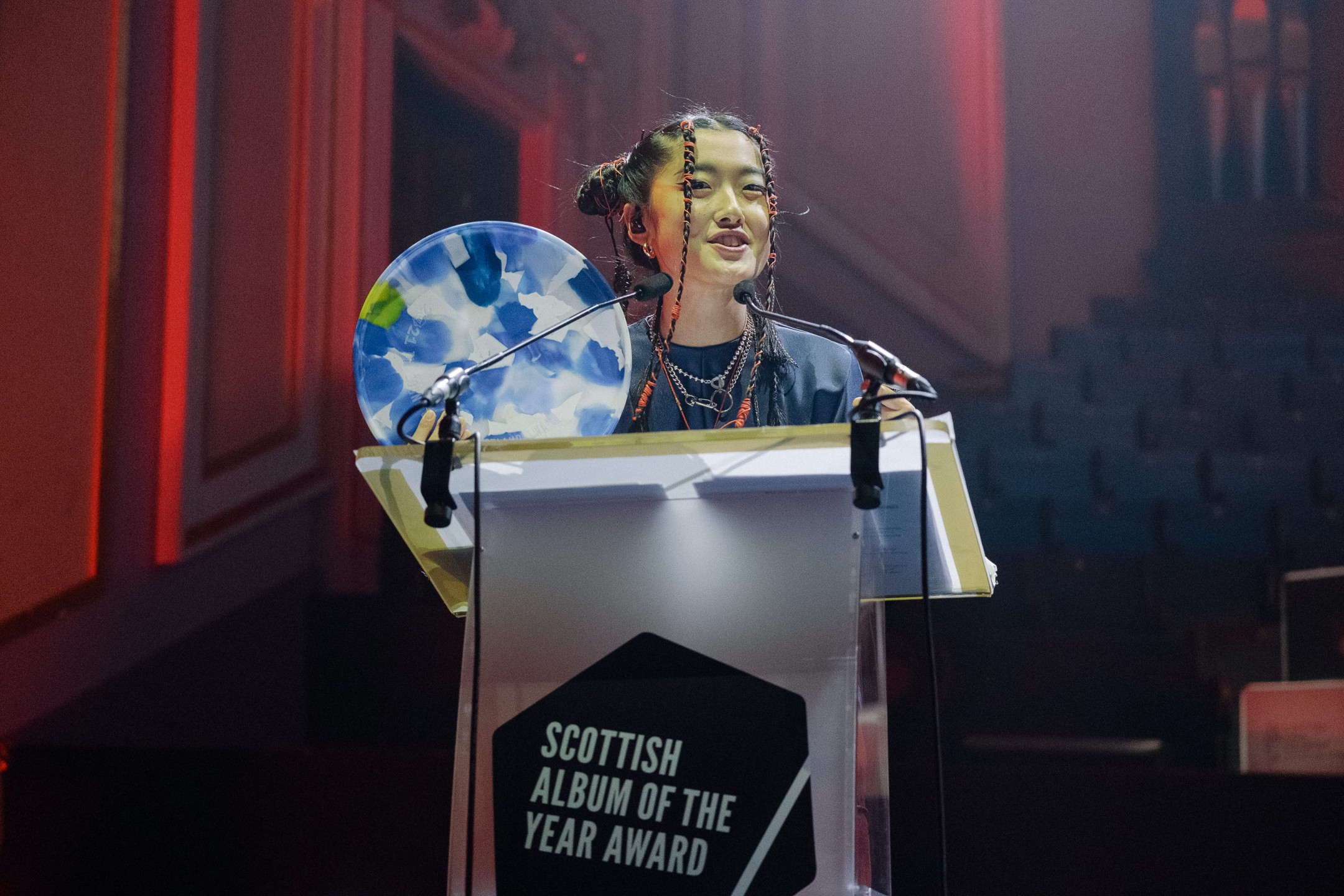 The Sound of Young Scotland Award, supported by Key Production, Youth Music and Youth Music Initiative, saw five finalists, Alex Amor, Cameron Roxburgh, Jen Mac, kitti and LVRA, recognised at the ceremony with the overall winner chosen by a panel of former SAY Award nominees from this year’s eligible applicants. Scottish actor, writer and TikTok sensation Paul Black presented the award to 2021’s winner, LVRA. Paul Black said, “Initially I did think I was getting an award but turns out I’m no a musician!”

LVRA will receive up to £5,000 to facilitate the creation of her debut album as well as 500 vinyl pressings of the finished release. Speaking before a breathtaking live performance, LVRA said, “This is amazing! Thank you so much to everyone who’s been supporting my music, it’s so awesome to win this in my home town of Edinburgh! I hope you listen to and enjoy my music – please support Scottish music because these other nominees were amazing and we all support each other.”

Championing the cultural impact, strength and diversity of Scottish albums for a decade, The SAY Award has now distributed over almost £300,000 in prize money to Scottish artists, and championed 200 Longlisted albums over 10 campaigns. From 327 eligible album submissions this year, to a Longlist of 20 and a Shortlist of 10, ‘As The Love Continues’ was chosen as the overall winner by this year’s independent Judging Panel.

Robert Kilpatrick, Creative Projects and Communications Director at the Scottish Music Industry Association (SMIA) said, “It couldn’t be more fitting – or more deserved – for Mogwai to win The SAY Award 2021 for ‘As The Love Continues’.

Winning the award with their tenth studio album, and on SAY’s 10th year, is a special moment for a band who have contributed so much to Scotland’s cultural identity, and for SAY which has celebrated, promoted and rewarded outstanding Scottish records since 2012.

‘As The Love Continues’ is a record that we’re incredibly proud to see recognised as Scottish Album of the Year tonight, and one which has rightly seen both commercial success and critical acclaim. Massive congratulations to the band, to Rock Action Records and to all involved in what is a genuinely incredible body of work. This win is so well deserved.

Tonight we also got to celebrate the winners of our two new awards, with LVRA claiming the Sound of Young Scotland Award, and Frightened Rabbit’s ‘The Midnight Organ Fight’ receiving the inaugural Modern Scottish Classic for a body of work that will be cherished for many years to come. 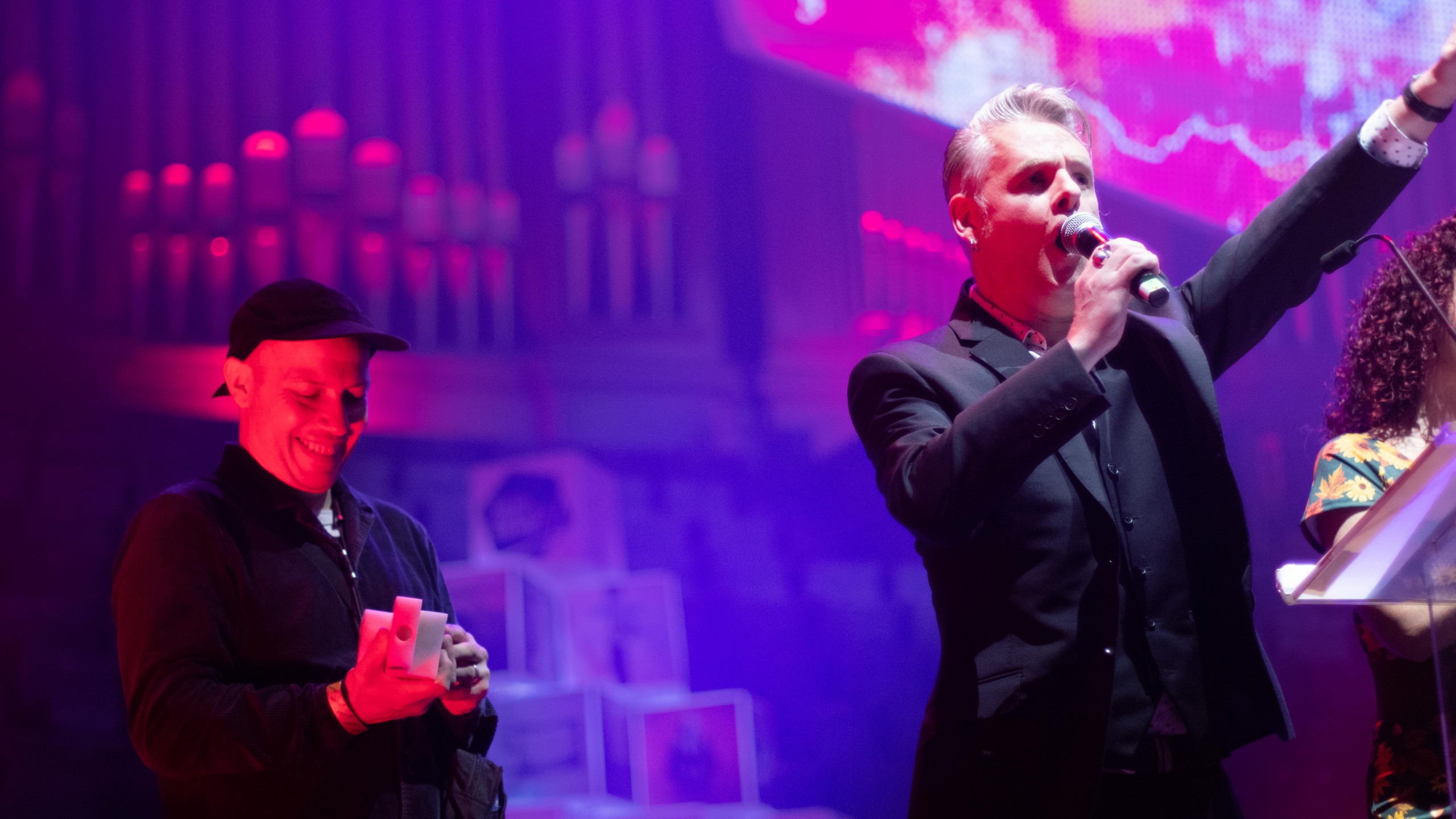 In a room full of artists, music industry professionals and music fans, after such a tough and turbulent 18 months, tonight we have truly felt the power, importance and impact of Scottish music at a time it’s never been more needed. Scottish music has never felt stronger, more exciting and more diverse. We have a lot to be proud of.”

Alan Morrison, Head of Music at Creative Scotland said: “’As The Love Continues’ is a pinnacle in a recording career filled with high points. Mogwai have set the world standard for instrumental post-rock, making powerfully emotional music that twists and turns through shifting dynamics. Coming a few months after they landed their first No 1 album, this SAY Award win is well deserved. Congratulations to the band – and to all of the nominees who have made great, life-affirming music in a year when we needed it most.” 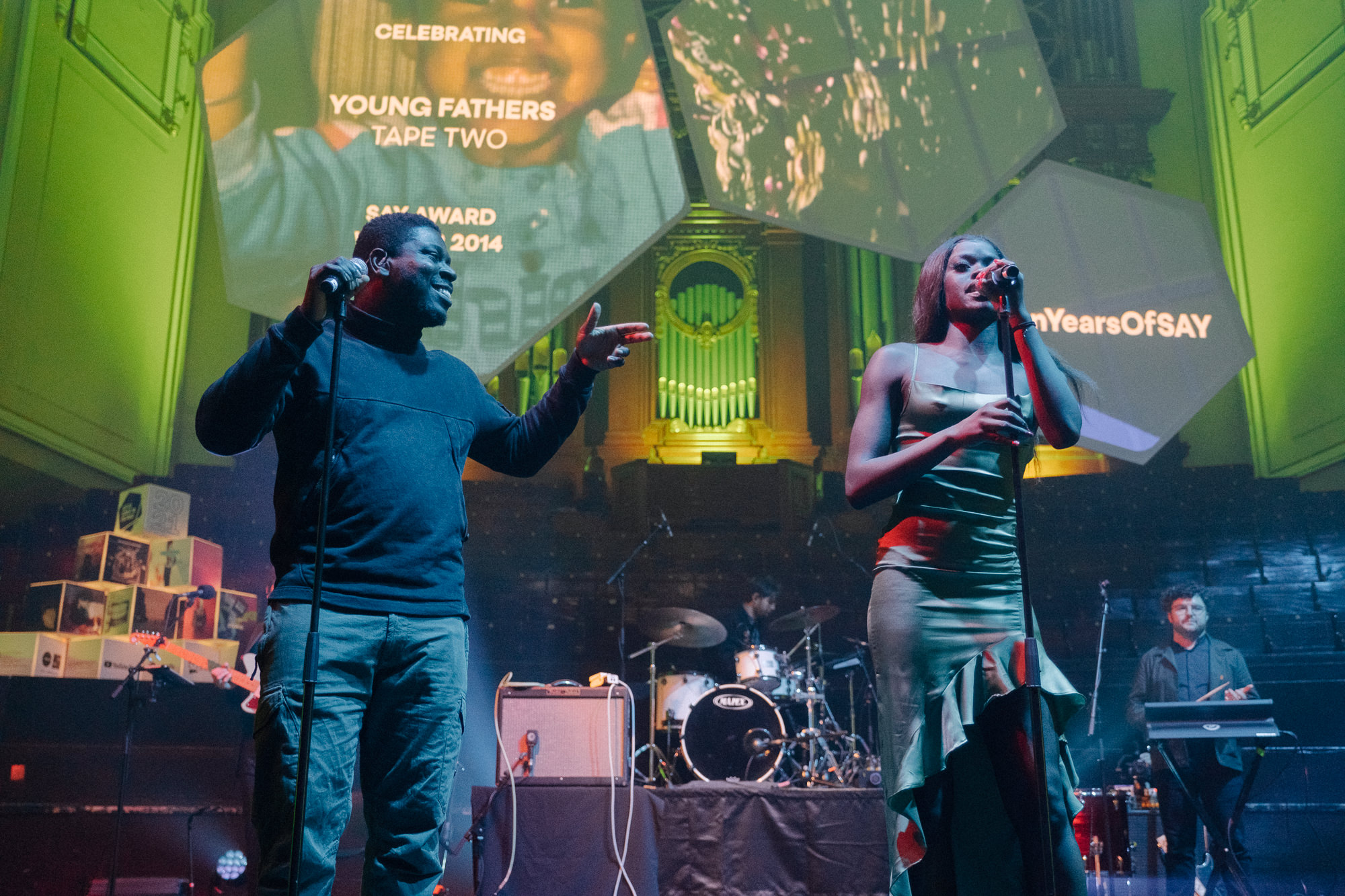 Morag Macdonald, Youth Music Initiative Manager at Creative Scotland said: “Using East-Asian, R&B and electronic music influences, LVRA’s music offers a refreshing and punchy alternative pop sound. Congratulations to one of our stars of tomorrow – and to all of the nominees of the first Sound of Young Scotland Award who showed us how exciting the future of Scotland’s music scene will be.”

Held for the first time in Edinburgh’s Usher Hall, with music fans able to purchase tickets and join the celebrations, the ceremony was co-hosted by BBC Radio Scotland presenters Nicola Meighan and Vic Galloway, and was truly a night to remember as artists, fans and industry figureheads were once again reunited following last year’s digital campaign. With the biggest and best from Scotland’s music industry back under the same roof, the ceremony celebrated 2021’s Shortlist with all nine runners up collecting £1,000 and their own bespoke commemorative trophy, with this year’s design focused around sustainability. The SAY Award Design Commission, in association with OVO Energy and curated by Local Heroes, saw Glasgow based design duo Still Life create striking recycled plastic vases and engraved trays made using 21kg of waste plastic including bottle tops and bleach bottles. 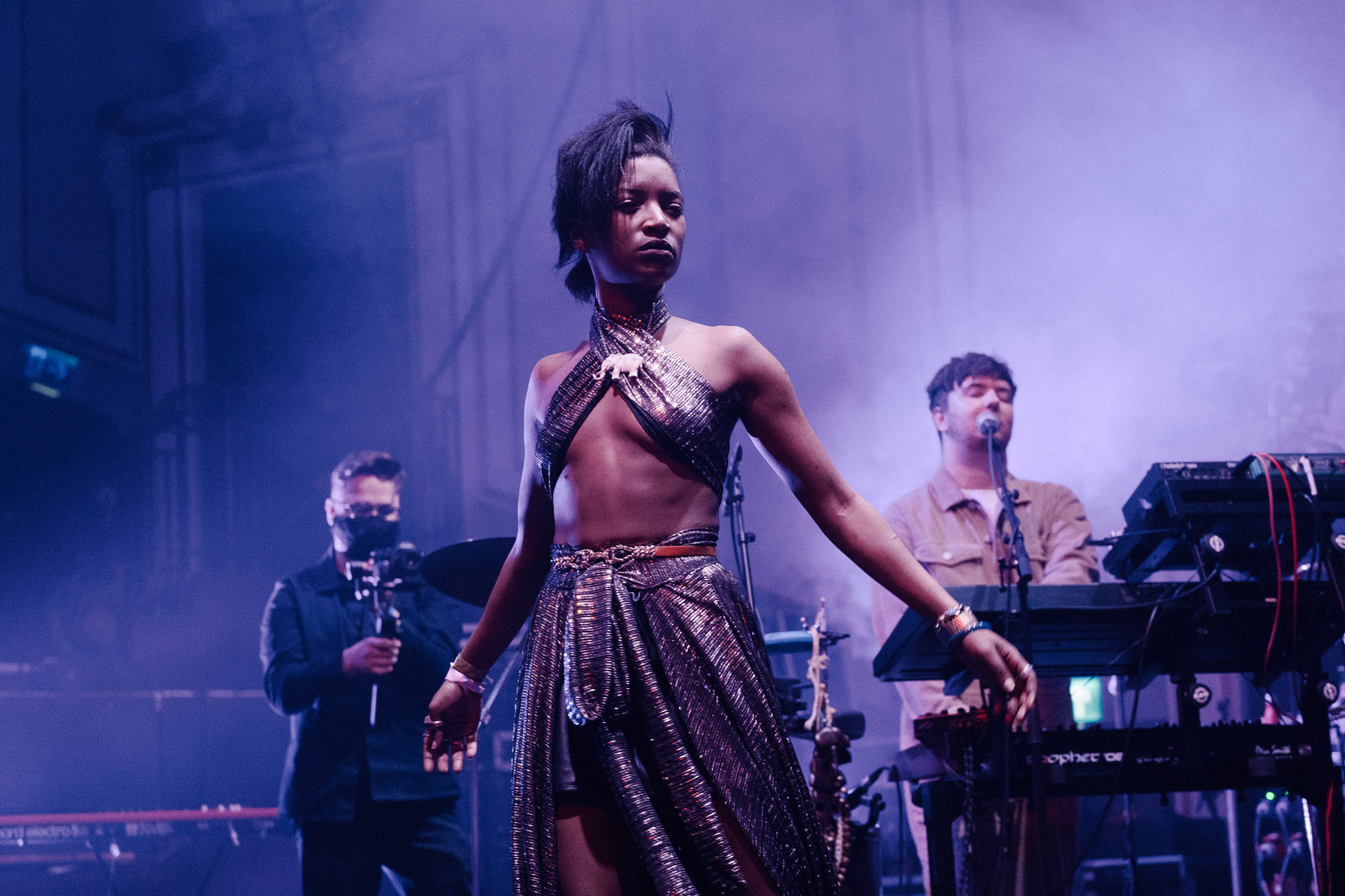