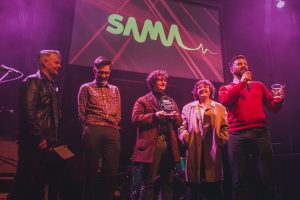 Crowned in Best Live Act category was Hannah Laing, the buzzing Dundee-born DJ/artist who scored an Ibiza residency aged 19 and whose 2022 featured prime-time floor-fillers ‘Climax’ and ‘Don’t Wanna Go’. Having made her BBC Introducing debut at BBC Radio 1’s Big Weekend in May 2022, Laing still works at her dental practice as well as hosting her own podcast and Hannah’s Choice club night.

Completing the Dundee hat-trick are Catalysis, an accomplished band unafraid to tackle gnarly topics from xenophobia to environmental collapse and mental ill health. Having taken their relentless groove-metal to Bloodstock Open Air this year as winners of the Scottish Metal 2 The Masses Grand Final, Catalysis plan to follow their recent fifth EP ‘Innova’ with a new release and live shows in 2023.

The winner of Best Acoustic was Linzi Clark, the Paisley musician behind the stunning Americana of ‘All I Have Now’, a debut album that glistens with beautiful, affecting story songs about identity, relationships and navigating life as a woman. 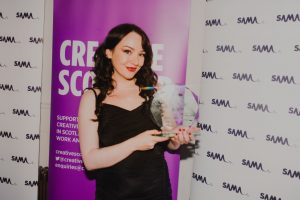 Best hip hop winner was Glasgow artist Becca Starr. Describing herself as “a self-producing blue-haired Scottish sprite”, Starr received international and local acclaim for the eloquent flows and soulful vocals of debut album ‘Speak Of No Evil’ as well as for breaking the silence around abuse in relationships by raising funds for Scottish Women’s Aid.

Leith’s Pocket Monica were named as Best Newcomer. Comprised of multi-instrumentalist Erez Yotam Bertrand and vocalist/songwriter Iona Zawinski – a pair of former strangers who found their weird-pop bliss while flat-sharing in lockdown – Pocket Monica describe their music as packing “big punchy beats from tiny wee calculator synths, middle-eastern flavoured harmonica, ripping flute, slip n slide-guitar, a banjo if you’re lucky, and a voice that might just take you by surprise”.

Riotous indie-punks Gallus won Best Rock/Alternative. Having formed in the Glasgow pub of the same, very appropriate name, Gallus played across seven different countries and two continents in 2022. They have more ambitious release and touring plans for 2023, including their biggest headline show to date at the city’s SWG3 in March and an upcoming performance at Europe’s biggest emerging music showcase Eurosonic-Noorderslag (ESNS) in the NL.

Alan Morrison, Head of Music at Creative Scotland, said: “Yet again the SAMAs are ahead of the curve, setting the musical agenda by throwing a spotlight on Scotland’s ones-to-watch. This year’s award winners aren’t just champions of alternative genres, they also draw attention to vibrant pockets of activity in overlooked parts of the country. It’s great to see Dundee get recognition in several categories for its diverse scene, reminding us that this truly is the city of discovery. Congratulations to all the winners and nominees who keep our listening habits fresh and exciting.” 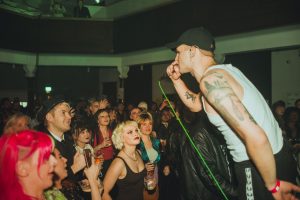