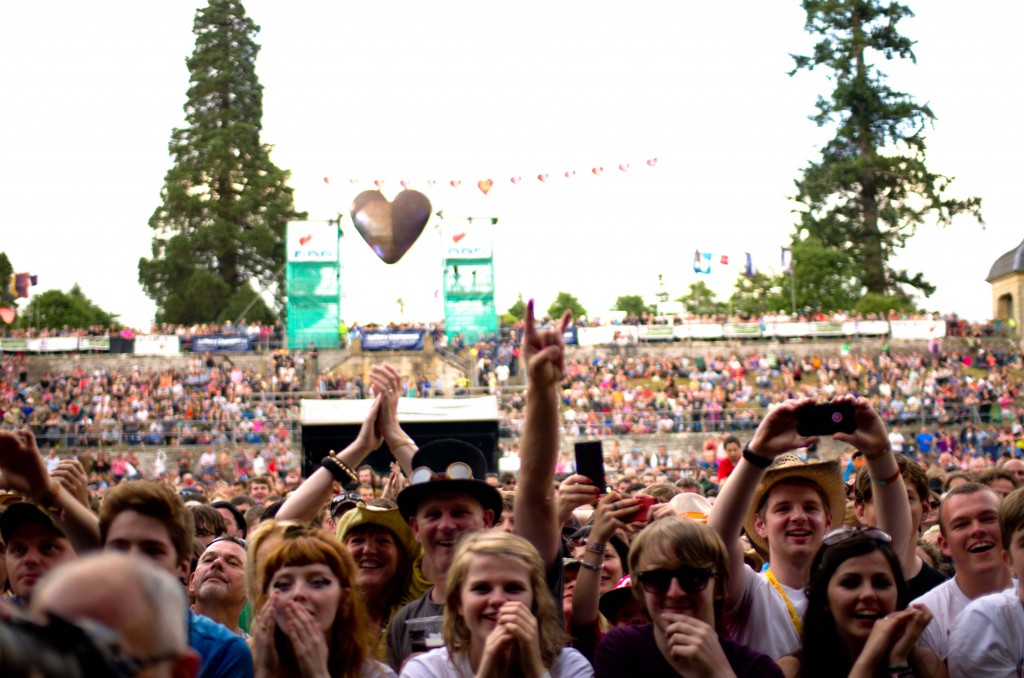 THE sun was beating down on Belladrum festival for the second day of performances, so the Grassroots Tent’s packed crowd for Anderson McGinty Webster Ward and Fisher was nothing to do with fans seeking shelter.

As they walked onto the stage, the band were surprised at the turn out, Anderson taking to the mic saying: “Wow, there’s a lot of you guys in here!”

Drummer Fisher was absent from the set, allowing for an acoustic set from the multi-instrumentalist group.

Swapping instruments amongst themselves throughout their performance, the band show themselves as the gentlemen of acoustic rock. With blues influences infused in their tunes, their beaming smiles as they thank the crowd and say “This is amazing!” only add to this intimate highland festival experience.

Kicking things off with Little Brown Boy the track invites a collective opener with all members singing in more than perfect harmony as one. This really is a perfect starting point, and as the acoustic guitar and banjo lead the second verse a wholesome atmosphere is established which doesn’t drop throughout the forty minute performance.

Lyrics, ‘sounds pretty simple to me’ and ‘everyone’s equal it seems’ captivate the audience. Belladrum has the right vibe for this band.

Boo Hoo, Sensitive Guy and Pigeon Song were all included in the no-nonsense, refined arrangement of a set. The Eagles influences shined through at times, especially with the band’s opening track.

AMWWF may not be able to come up with a name from what they have just displayed on stage but that only adds to the charm. Organic, simple and utterly fantastic. And all done through nothing more than a collective love for music and words. 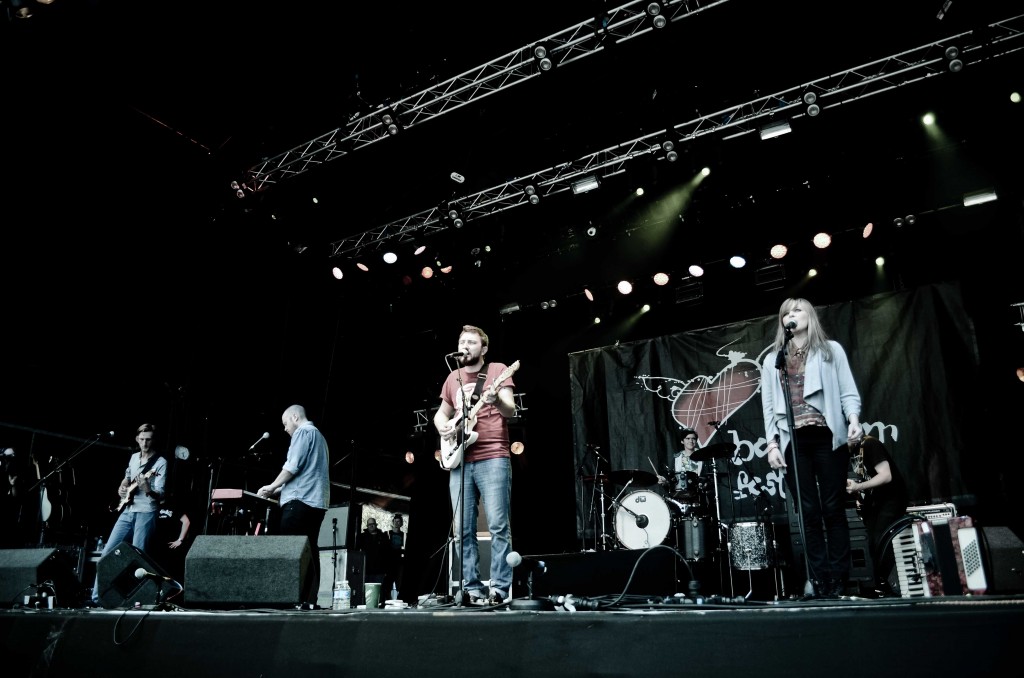 Admiral Fallow fulfilled an afternoon slot on the Main Stage, holding their own throughout the set on a stage that has welcomed with open arms, great Scottish talent over the weekend. Just take Twin Atlantic’s headline slot from the evening before, as they owned the Scottish stage its a performance that will make Belladrum history. The crowd again welcomed home-grown talent as the performance unfolded and we all celebrated how far Admiral Fallow have come.

Right place, right time it is for Admiral Fallow though; the popularity with the folksy Scots is second to none. And what do this band have that Frightened Rabbit do not? The angelic tones of female member and co-lead vocalist Sarah Hayes give Admiral Fallow a poetic and pummelling footing onto the Garden Stage.

The band have come leaps and bounds since forming in 2007. No more than they deserve, the band have received recognition and praise of their clever musical arrangement and style. Their rendition of track The Paper Trench reaches the far depths of this enclosed Main Stage area; a nice upbeat track with harmonies from Louis Abbott and Hayes working perfectly well. A solo from Abbott on the bridge sees the song stripped back to the bare necessities, only to be brought to life with the drums kicking in building this song into a powerful track.

Isn’t This World Enough is another festival-worthy addition to the set and a right crowd pleaser- especially fitting for a Saturday afternoon with the sun splitting the sky. Abbott demands a sing-a-long for this one, directing the ooohhh’s and ahhhhh’s. Leaving the stage, Admiral Fallow can rest easy that they played a set worthy of its billing.

New buzz band from Heavenly Records, Stealing Sheep– Toy, Charlie Boyer and The Voyeurs are both signed to the same label- were doing it for the girls on Saturday afternoon. An impressive crowd filled the tent for the Liverpool three-piece featuring keys, drums and guitar. 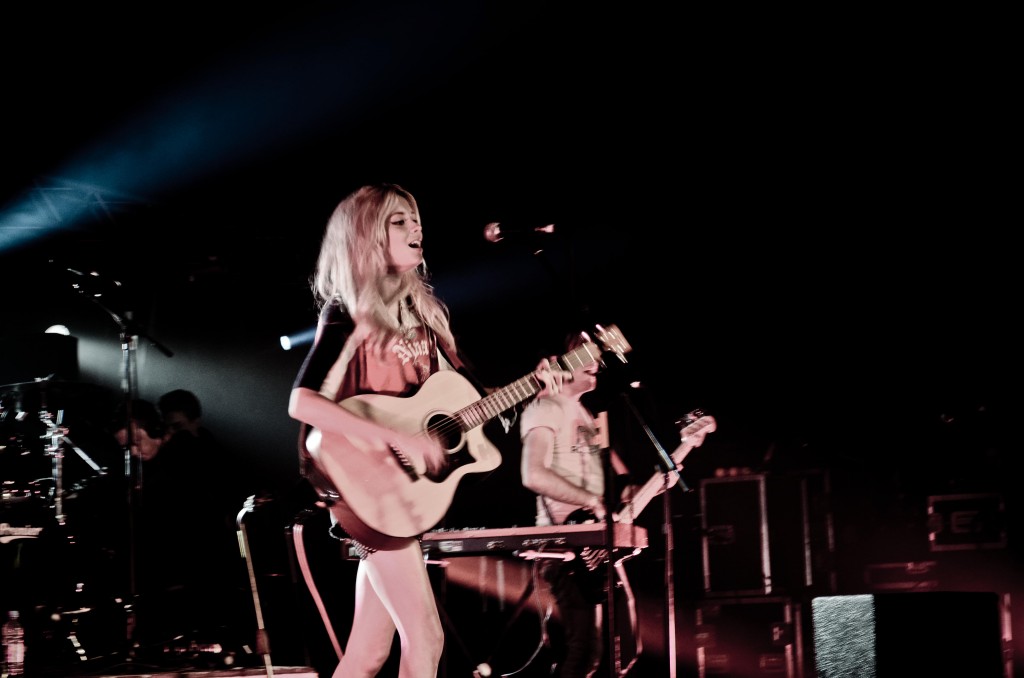 With the threat of rain in the gloomy clouds above, Belladrum manages to continue through another day of sunshine subjected to only a small shower early evening. Nina Nesbitt’s slot in the Hot House Tent offers fans some shelter as she plays to a packed crowd of Nesbians (as she likes to call them).

Opening with Cherry Tree, Nesbitt and her band played well together although Nesbitt remained distracted throughout the track as she demanded and pouted about the level of her microphone.

It was straight into the rest of the set, levels sorted and the crowd raring to go. Thematically, this is acoustic pop with sweet-like-candy lyrics that under 18’s can relate to. Credit where credit’s due though, Nesbitt self-taught guitar chords from an iPhone app and has packed tents at major festivals such as T in the Park and Kendal Calling this summer. She’s playing well with a young heart and it seems there’s a trend emerging with Nesbitt’s festival style as she keeps up the denim hotpant and fishnet cycling short combo for this Belladrum performance.

New single Way in the World is introduced with a line or two about leaving her job in River Island to peruse her dreams- something she encouraged fans to do. The crowd clearly enjoy its catchy chorus and hook, singing in unison from start to finish.

Stay Out also goes down extremely well, opening line ‘He’s got a Rolling Stones tee, but he only knows one song,” both catchy and observant. A shock final track takes Nesbitt back to her hometown of Edinburgh as she sings The Proclaimers hit 500 Miles. This song ends the upbeat set on a high, young fans leaving the tent bordering on hysterical.

The Hothouse tent was the place to be this evening with The Pigeon Detectives up next. It was only recently we caught the guys at Liverpool Sound City. Backstage, the band were caught playing a simple acoustic version of one of their hits Emergency, so it was fantastic to see the showman emerge from Matt Bowman as he takes to the stage. Bowman doesn’t waste a second, tumbling on stage shouting ‘Let’s fucking hear you Belladrum” with a leather jacket that I am sure won’t last long as he throws himself into opening track I Won’t Come Back.

I Found Out is up next from the debut album, causing Bowman to begin the trademark mic swinging, throwing it around the stage running towards it just a second too late and missing it completely. This just spurs him on more though, jacket removed and standing on the speakers he gulps down half a water bottle spraying it into the air, adding to the spectacle that is becoming this set.

“Show me your fucking hands Belladrum, we are in this together,” Bowman shouts. “Belladrum festival, bounce!” And within a split second that’s exactly what the Hothouse Tent does, packed to the rafters and with kids all around me, the tent erupts moving up and down in time with the marching drum beat of What Can I Say?

Crowd favourite Emergency brings the set to a high point, the crowd singing along loudly. This track sparks a pink sun umbrella-led mosh pit; Belladrum so quaint that even their mosh pits have a pretty touch.

The high-energy set includes Romantic Type and Done in Secret, giving way for Bowman to tell the crowd its been great to drive ten hours out of depressing England and into the glorious countryside in Scotland. He comically adds: “I will never understand your square sausage, but it’s an absolute pleasure to be here!”

Bowman tells the crowd we are here to make memories together and for every single one of us to get on the shoulders of the person beside you, no exceptions. The band begin to play Everybody Wants Me and the stage disappears from sight as 75% of the crowd climb to a higher height on the shoulders of their friends and parents. This is a great moment, with the strobe lights lighting up the silhouettes of the crowd, the atmosphere rising.

The band end with a hit from their debut record I’m Not Sorry, and as the set comes to an end, the crowd walk out elated from their performance that has seen fifty-year-old Dad’s carry their tots and teenagers on their shoulders, dancing from start to finish. And for me, I feel nineteen again; this gig as good as PD were at the Barrowlands during the height of their success back in 2007. 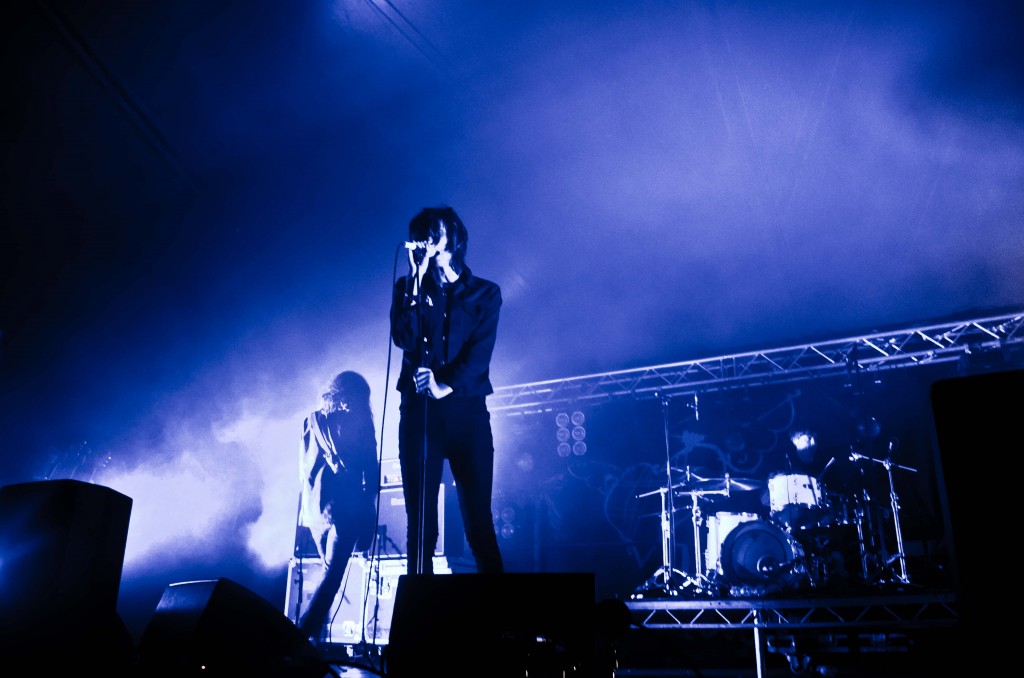 Another band to take on the Hothouse Stage were the dark guys of melodic psychedelic rock, The Horrors. The band took to the stage with frontman Faris Badwan’s expressions extra gloomy. Who Can Say was introduced as the second single from their album Primary Colours- and it was played fantastically well. The bassist Rhys Webb owning the stage as he moved around it in a way that more than made up for the subdued performance, thus far from Badwan.

It was also Endless Blue that brought more people into the tent, clear that the Belladrum crowd had opted for the Main Stage spectacle of James at the other side of the festival. Guitarist Joshua Hayward worked in harmony with Webb-both mystically moving around to the rhythm-defying music.

Sea Within a Sea, Primary Colours and Still Life became the highlights of the set, although the same set at another festival would have been a completely different experience- I enjoyed watching the band more methodically which was allowed from the calmer atmosphere in the Hothouse Tent. 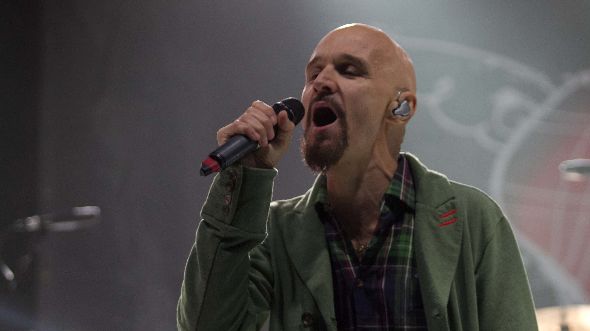 James were the talk of the evening with fans making their way to the Main Stage in mass groups humming iconic tunes Sit Down and She’s a Star with their friends. Great for them then, that both were included in the set.

Tim Booth may have lost his hair, but he’s not lost his mojo. In extra baggy jeans and a tartan shirt- it became the perfect outfit for his Madchester-cloned dancing complete with rapid arm movements as he circled his limbs towards the sky.

Although it was obvious that James were enjoying their moment at Belladrum, there were more than a few times that the crowds prompt to sing while Booth held his mic to the crowd fell flat.

The finale was thankfully fiery and well-delivered, and Booth could have left all the singing to the crowd during a favourite with fans, Laid. It was a number two hit in the UK twenty years ago and its distractingly rude lyrics haven’t lost their quirk right here, right now in 2013.

As the fireworks marked the end of Belladrum’s tenth birthday celebrations, the shooting lights sparkling in the sky reflected on the ample amount of greenery around the site. And walking out towards the camp site and under the John Lennon Imagine archway you can’t help but wonder how a festival like this has managed a weekend of Seasick Steve, Twin Atlantic, Alabama 3, The Horrors and James- all in an understated fashion.

Read our review of day one at Belladrum HERE

Friday round up of Belladrum