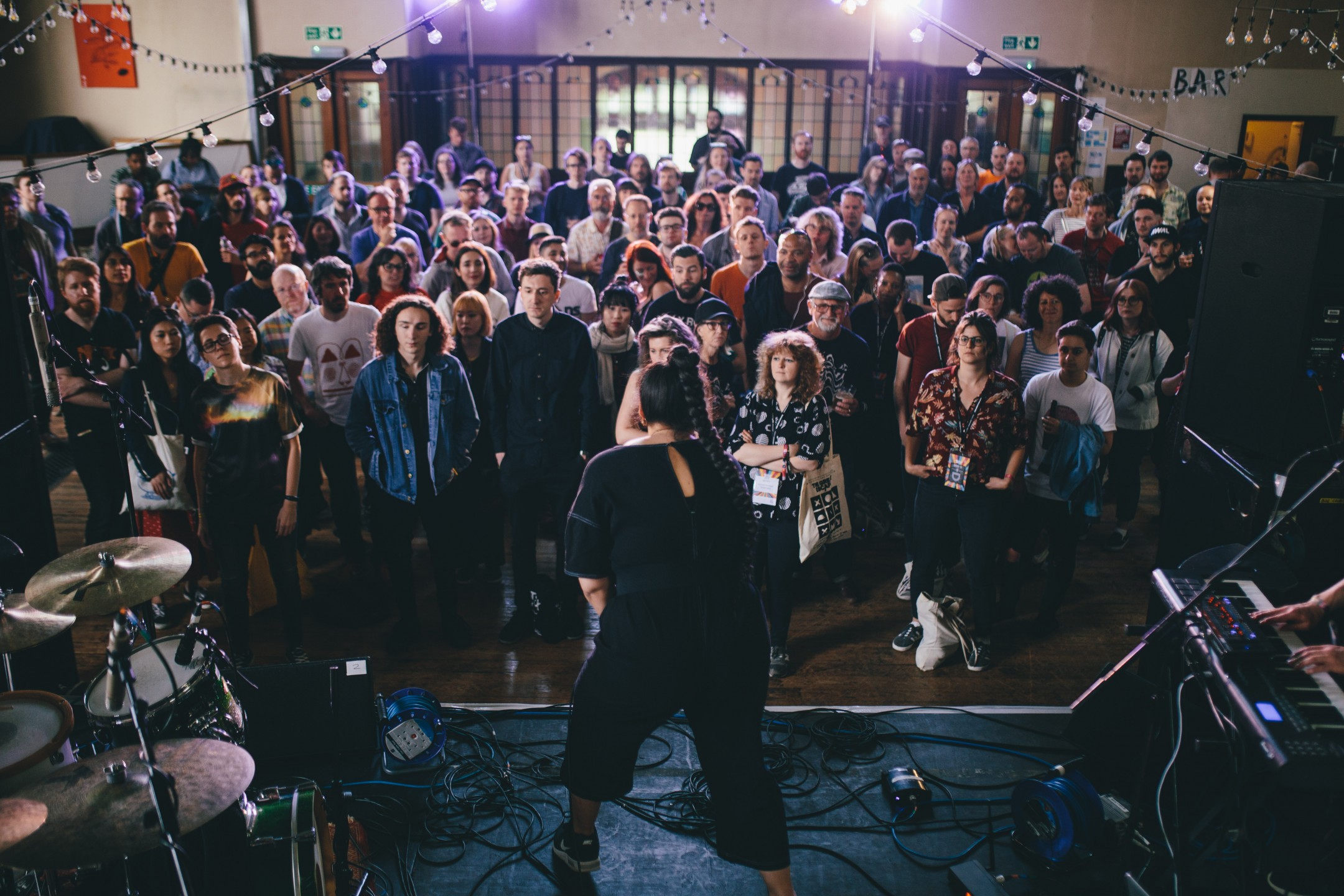 ANOTHER day, another venue and four more bands to show off their genre-scaling assets. Kicking off with Declan Welsh & The Decadent Welsh who pack out the One Church venue just after midday and commence a set for the hangovers with a rendition of Declan’s poem ‘Lads’. With gasps and applause filling the venue as the band appeared to join solo Declan on-stage, it became apparent just how far this young ‘lad’ has come.

I remember trenching through the mud at T in the Park to reach him on the T Break stage during a ten minute break from my duties working at the festival a few years ago. A lot of others had the same idea that day and he played a huge set that really stood out from the other 15 acts. Fast forward three festival seasons and here we have Declan Welsh & The Decadent Welsh showing the kind of effortless style and charisma that you don’t come across every day.

There’s something supremely special about this band. 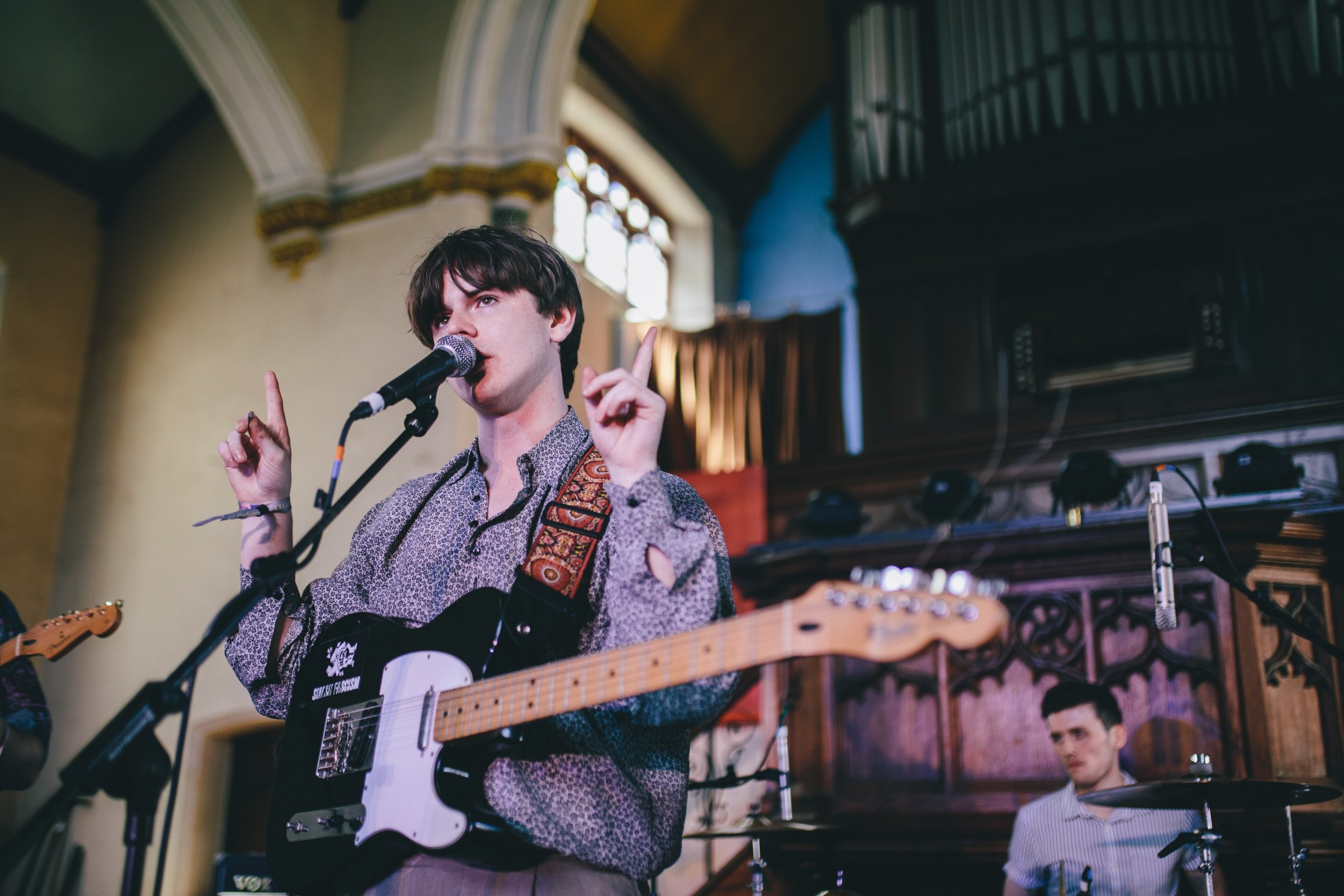 Watching Declan Welsh grow since that young performer to what we’re saying today is quite something and he’s genuinely never been this good. With a confidence and diversity that translates magically from page to performance, I am obsessed with how he oozes style as much as substance. For me, the peak of the set remains at ‘No Pasaran’, a track so full of power it shakes you to the core. 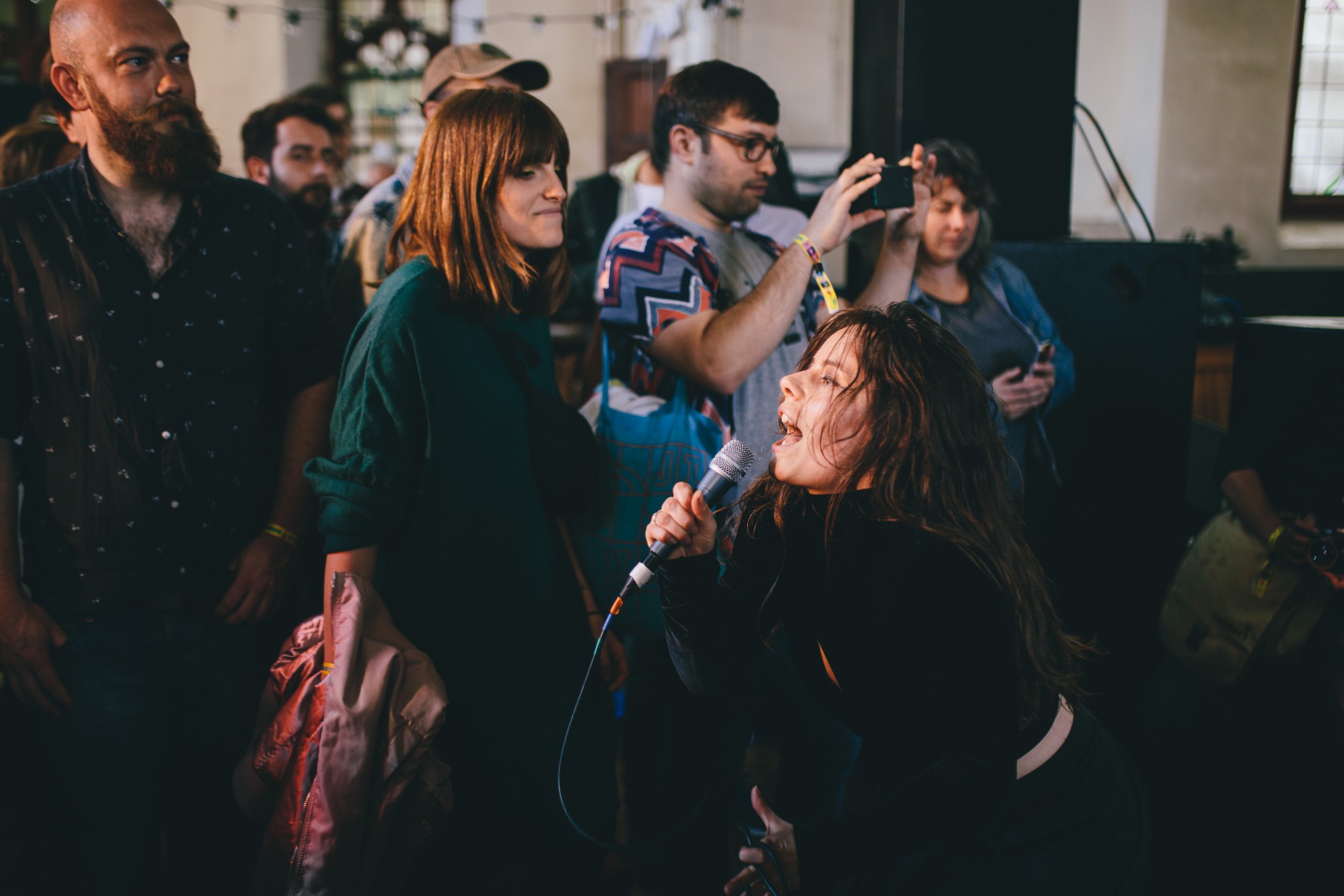 Free Love (previously known as Happy Meals) really come out of nowhere for me, personally.. I am familiar with their style, tunes and talent but what unfolds is truly one of the moments of the festival and I sense a few others around me feel the same way too. With an energy like no other, I have never witnessed a show quite like this as Suzanne Rodden dances and blends her way through the audience.

SESSION: Free Love (FKA Happy Meals) perform 'Altered Images' & 'Pushing Too Hard' ahead of the Creative Scotland Showcase at The Great Escape Festival 2018 on Friday 18th May (13:30) at the One Church, Brighton.To find out more visit: creativescotland.com/thegreatescape #TGEScot

Previously nominated for the Scottish Album of the Year award, the duo bring a unique flavour to proceedings today with genuine awe-struck glances passing through the crowd as she climbs the bar, interacts with the spectators and dives into a performance worth talking about. 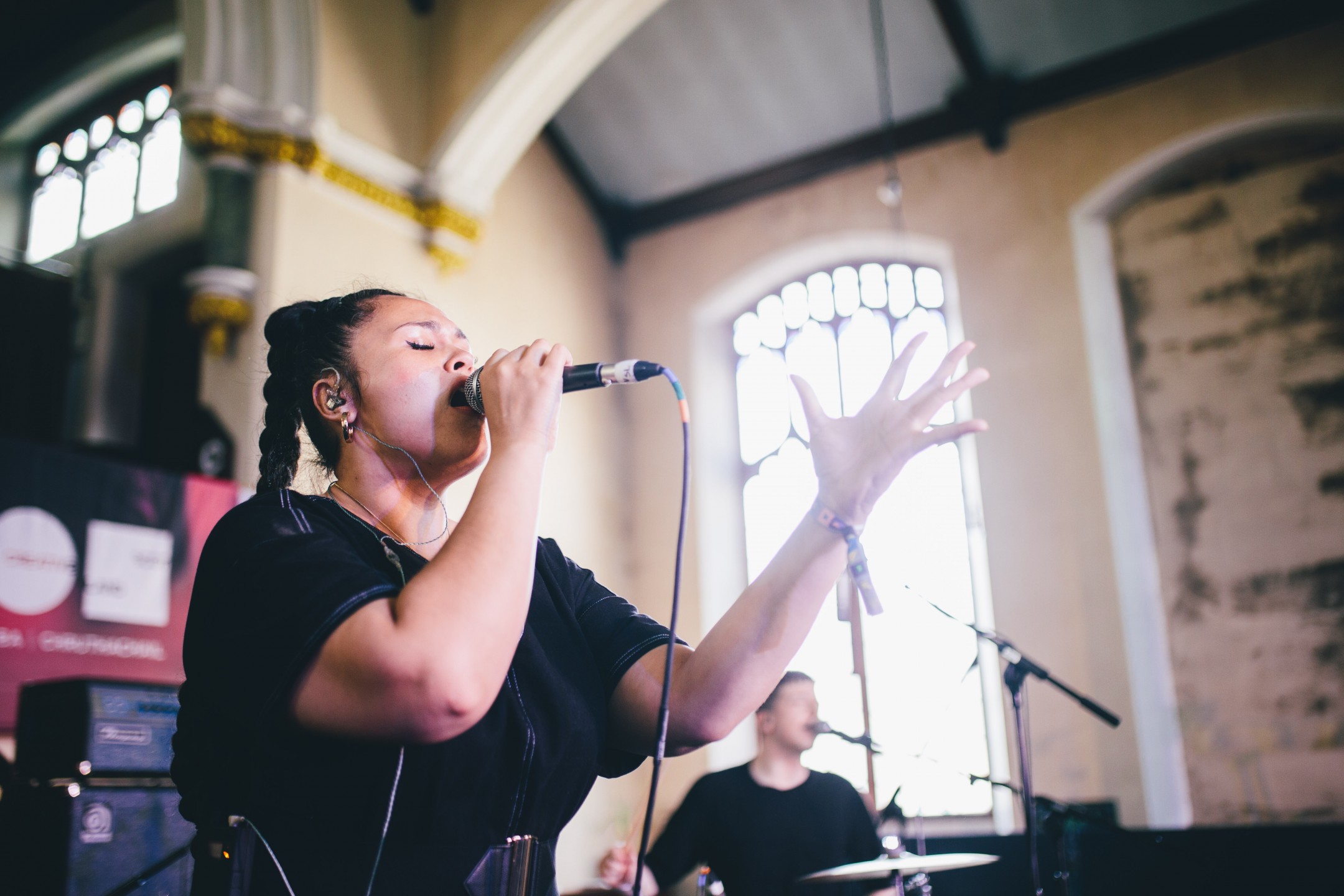 Bossy Love take the next slot and despite Free Love proving to be a hard act to follow, they bring the power and potential we know them for.

Frontwoman Amandah Wilkinson brings another promising performance to Brighton, ensuring the heavy-female presence on the Showcasing Scotland bill is something to be proud of.

With a cultish following back in Scotland, the crowd’s reaction to this high-energy set never willows. An old school R ‘n’ B classic is sandwiched between the tunes and Amandah bellows out a freestyle-esque rendition of ‘Breathe’ by Blu Cantrell with huge passion, placing this performance firmly in the top tier category of this year’s The Great Escape Festival. 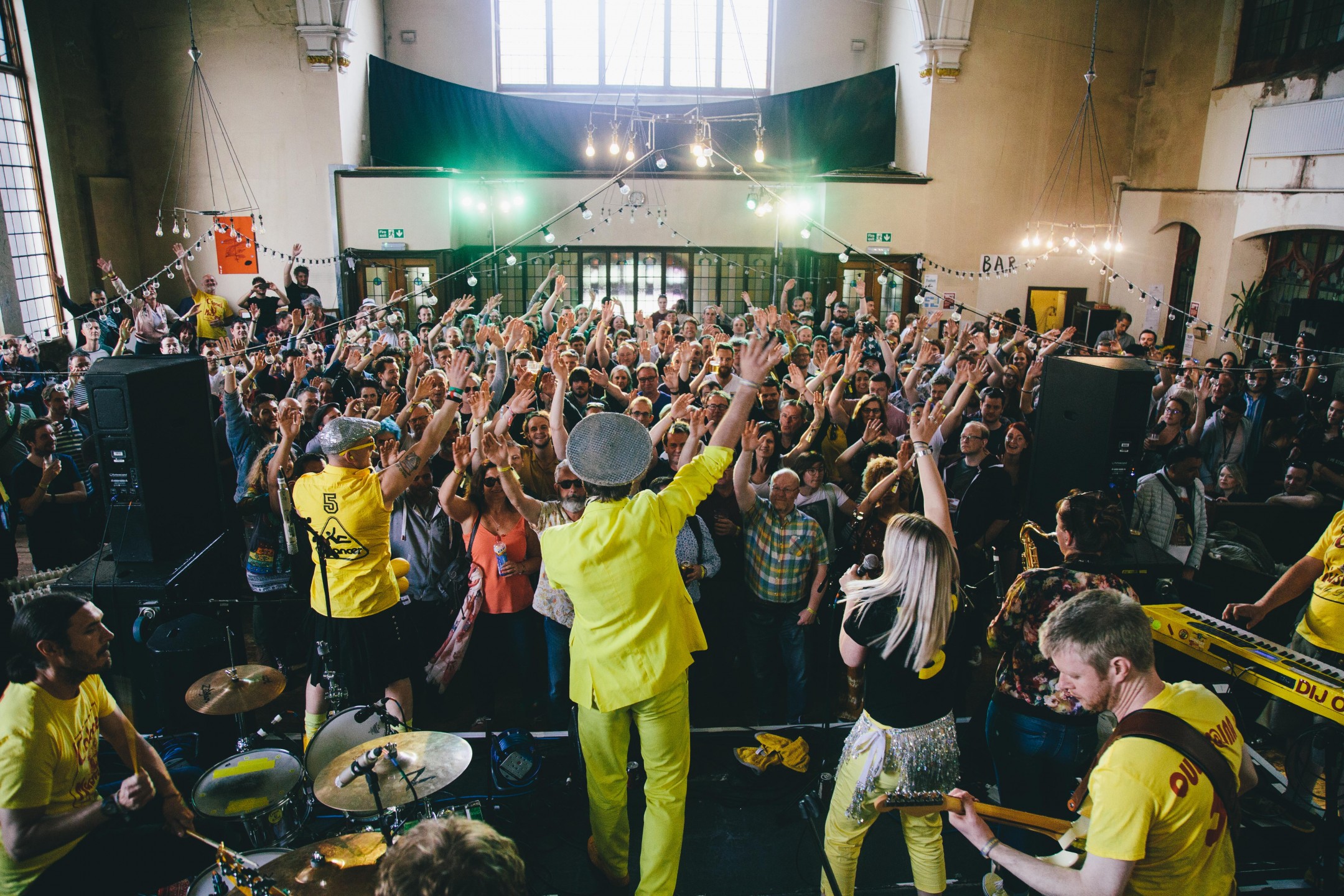 The closing act at this year’s Showcasing Scotland soiree is Glasgow’s Colonel Mustard & the Dijon 5, a band so infectious I haven’t really stopped thinking about this since. I stand on the stage videoing the spectacle that is the Yellow Movement and see group dancing, huge smiles, mass singing; happiness is truly personified throughout this disco rollercoaster of group joy and adoration.

Is there a better festival band than The Dijon 5? Probably not. This has summer sunshine and green fields across the UK all over it. Bravo.

With the peak of talent at the peak of the festival, we take the festival final pint at Lewis Capaldi on Saturday night who packs out beach arch venue Coalition as the stag and hen doos surround bars pumping out every bad top 20 hit from the last five years around us. Never has the divide of great and terrible music been more prominent. Fond of Capaldi in more ways than I can count, this show comes at the end of a huge tour with Sam Smith and as he belts out tracks like ‘Lost on You’, ‘Mercy’ and ‘Fade’, gentle gasps fill the venue from the many industry heads, fans and Capaldi virgins in the audience.

A mesmerising hold succums me each and everytime I go to a Lewis Capaldi show and you feel deeper in love with the supreme talent that hangs in his vocals. The sheer endearment of the young Scottish singer is almost as impressive as the  banter between songs. A simply incredible singer that is destined for headline shows and record breaking deals worldwide.

Check out our day one review here.

DAY ONE: Showcasing Scotland with Creative Scotland at The Great Escape