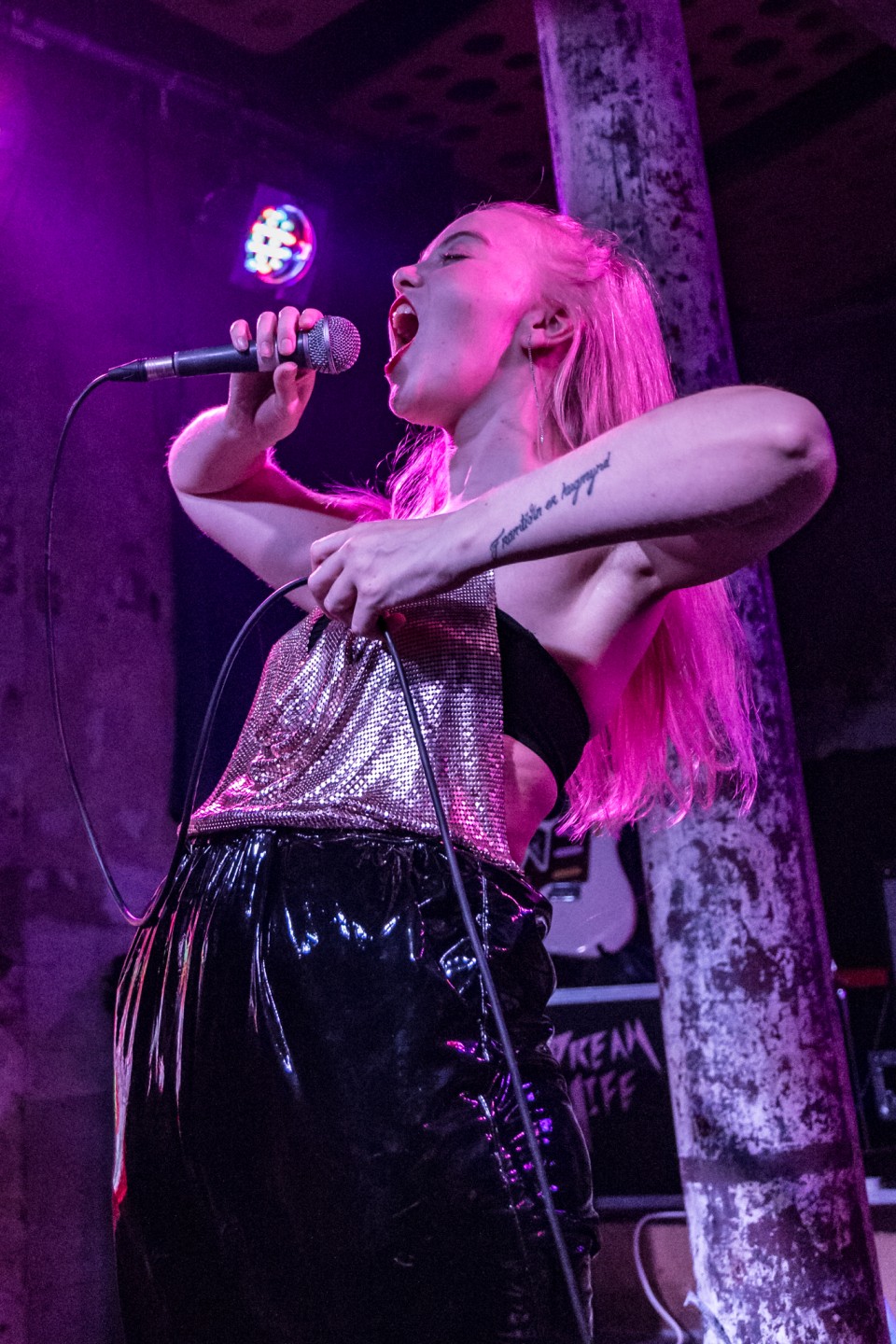 A LOT has happened since Dream Wife began life as a performance art project at the University of Brighton. Thrust into the limelight thanks to a relentless touring schedule aswell as an endless stream of support from blogs, notable magazines and tastemakers, the three-piece more than lived up to expectations when they finally unveiled their long-awaited debut album at the start of the year; a record bursting with sharp melodic punk tunes, endless charisma and fuelled by a fierce, fiery attitude.

The live setting is where the band really shine though. Arriving in Glasgow with one of the debut albums of the year already under their belt, it is no surprise to see Stereo’s sweltering basement packed full of punters ready for a night of unapologetic punk rock from Rakel Mjoll, Alice Go and Bella Podpadec.

Up first though is Glasgow’s own LUCIA, who is barely off the plane after a busy week at SXSW over in Austin, Texas. There’s no sign of tiredness or fatigue though as the frontwoman and her three-piece band fire through yet another captivating set full of punk-infused indie bangers. An artist who we have watched evolve before our very eyes over the past 12 months, LUCIA looks more confident than ever as she effortlessly owns the stage, seizing the crowd’s attention with material from last year’s Best Boy EP and the emphatic, brilliantly scuzzy ‘Melted Ice Cream’.

It doesn’t take long for Dream Wife to crank the temperature up a notch. Upon entering the stage, they launch into the blistering sounds of breakout single ‘Hey Heartbreaker’; a song which provokes an immediate reaction from the crowd with its pulsating rhythms and singalong chorus. While the band’s debut album has a slight glossy sheen to it, their energetic live show lends a fiery intensity to their already biting material. 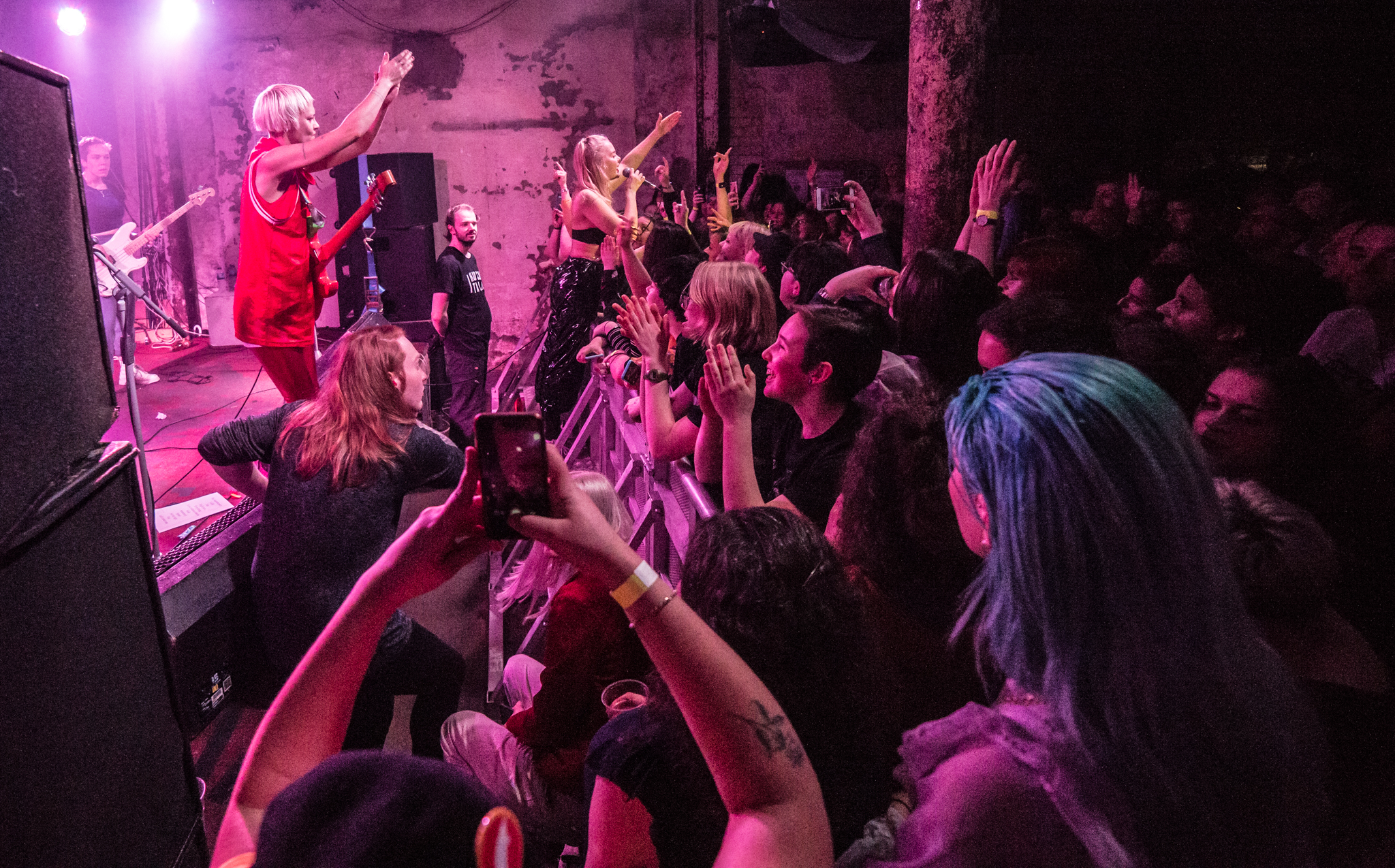 It all stems from their immense onstage chemistry. Bella Podpadec and Alice Go weave around one another with formidable bass rhythms and serrated guitar lines; the latter of which have become such a signature feature of their sound. Effortlessly jumping between syncopated riffs and screeching shreds, the guitarist drives the show while bringing a ferocious edge to their pop sensibilities.

Meanwhile, Rakel Mjoll commands the audience with every yelp, snarl and eye roll. Utterly compelling from start to finish, she lures you in with a deceptively sweet Bjork-like quirkiness before all of a sudden she is consumed by rage and spitting fire down the microphone. She is never more powerfully engaging than on the band’s feminist anthem ‘Somebody’; ‘I am not my body, I am somebody’ she screams in the band’s most empowering statement to date; a song about women taking back control of their own bodies.

In a wonderful moment of audience connection, she asks for all those who identify as female to make their way down to the front. “Support your local bad bitch” she tells the audience to a chorus of screams at the front. What could have been any old rock show, transforms into something a lot more profound; it’s a chance to celebrate femininity and to break gender norms in a shared communal experience. Dream Wife are a band with a message and they don’t just talk the talk; they wield it powerfully through catchy, upbeat punk rock, all while creating a safe space for their fans.

From here on in, Rakel Mjoll owns the room. They fire through the brilliant ‘Act My Age’ and ‘FUU’, both of which feature impromptu covers of Blondie’s One Way or Another and Spice Girls’ Wannabe. The latter is utterly incendiary when performed live and sees the frontwoman jump off the stage and jump along with the feverish crowd. The fiery ‘Lets Make Out’ sees things out in thunderous fashion as Mjoll promises to return as soon as the band have more songs under their belt. We can’t wait for more.