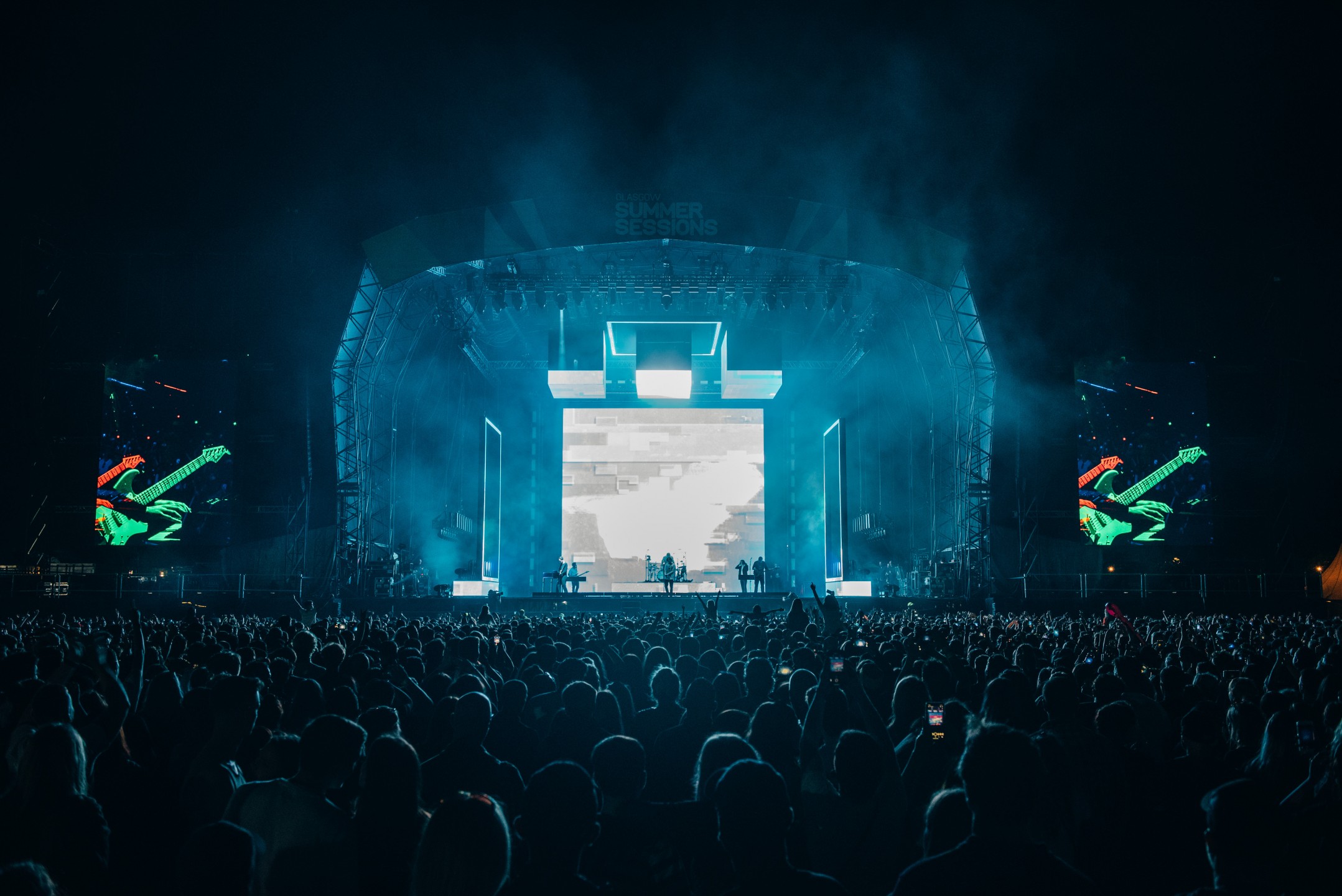 FROM the moment The 1975 launch into their brand new single ‘People’, it’s quite clear that this Summer Sessions show isn’t going to be any old gig. The track took everyone by surprise when it was officially unveiled last week; a guttural blast of pure, unadulterated punk rock nothing like the band have ever done before. ‘WAKE UP WAKE UP’ Matty Healy screams over a backdrop of gnarly guitars and breakneck drums in a defiant rallying cry to humankind to sort their shit out.

‘People’ sums up everything about the kind of band The 1975 have become – unpredictable, politically charged and absolutely vital. Over the past six years, they’ve not just captured the cultural zeitgeist – they’ve reached up and put it in a chokehold. On last year’s ‘Brief Enquiry Into Online Relationships’, widely acclaimed for both its inventiveness and timeliness, they emerged as experts on a certain kind of social media age ennui – celebrating the youth of today while also exploring the anxieties and uncertainties that have stemmed from the current tumultuous climate. And from what we’ve heard so far, the eagerly anticipated ‘Notes on a Conditional Form’ slated for arrival in 2020 will see them continue in the same vein – only angrier and with greater forcefulness.

With a set that’s peppered with themes of love, protest and inclusivity, it’s not hard to see why they’ve seized the hearts and minds of the millennial generation. It certainly shows at Bellahouston Park where luminous 1975 merch – featuring the words ‘Wake Up’ from their brand new song out just two and a half days prior – can be seen everywhere. The audience may already be completely enamoured but there’s no denying that a Summer Sessions headline slot is a milestone moment for a band who only a few years ago were playing in the city’s most intimate venues. Matty Healy tells the crowd “This is really special for us. It’s very representative of how far we’ve come in a really short space of time. I’m glad we’re here, you’re always the loudest audience”.

On an unseasonably hot August day they are joined by the likes of No Rome, Ten Tonnes and fellow Dirty Hit signees Pale Waves; the latter of whom go down a storm with massive indie-pop hits like ‘Eighteen’, ‘The Tide’ and ‘One More Time’. Having clearly benefited from the experience of supporting tonight’s headline act in arenas all over the world, their breakthrough debut single ‘There’s a Honey’ delivers one of the day’s first arms-aloft moments. 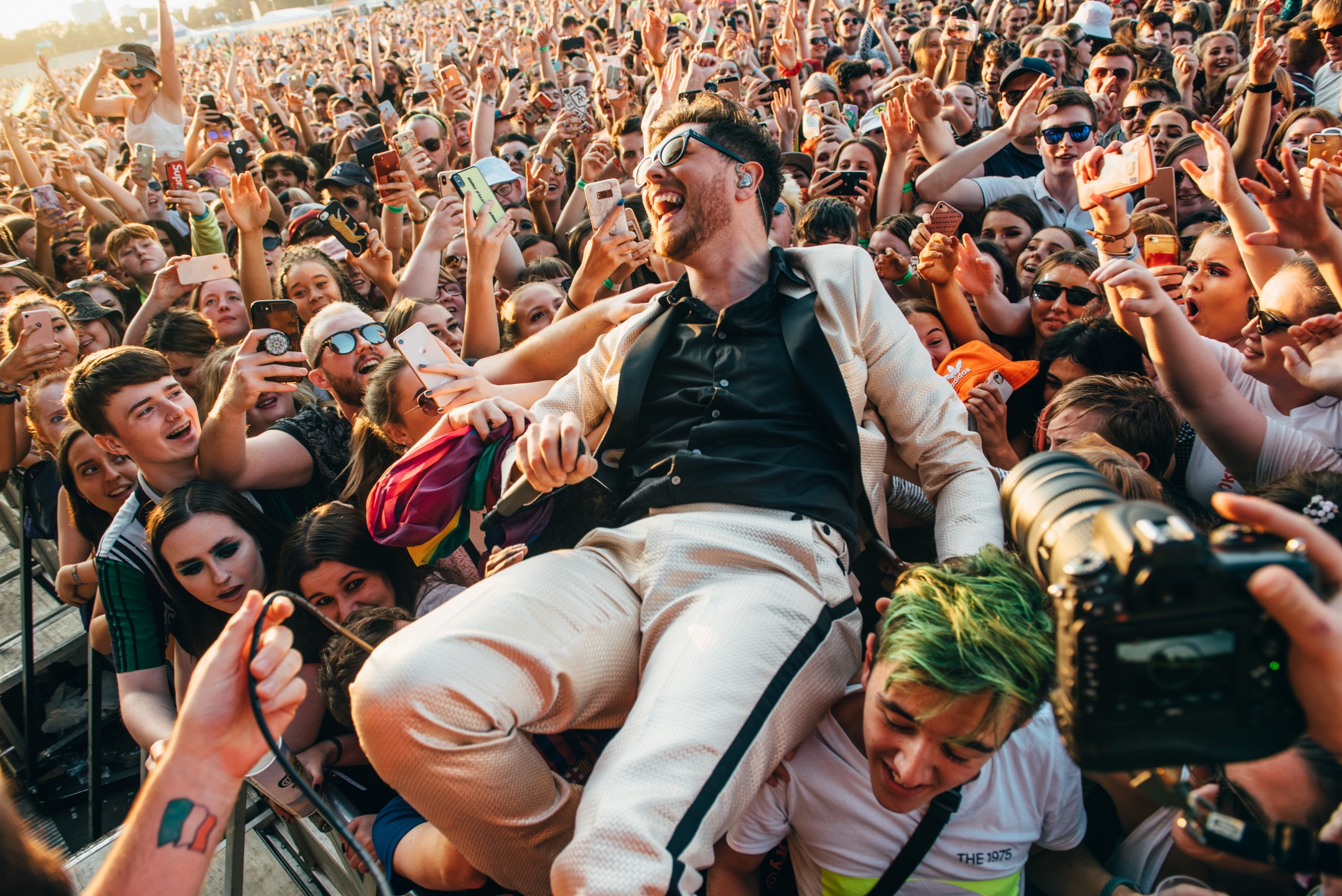 Festival veterans You Me At Six hit out with some storming alt-rock and nostalgic pop-punk anthems before Glasgow’s very own Twin Atlantic return to the Summer Sessions stage after a thrilling display at last year’s festival. “It’s amazing to be home” frontman Sam McTrusty roars as the band tear through one electrifying anthem after another. Brimming with confidence and donning an eye-catching gold suit for the occasion, McTrusty brings heaps of bravado and showmanship to the stage as they deliver old favourites like ‘Crash Land’ and ‘Free’ alongside popular tracks from their Glasgow-inspired album GLA.

It’s all about tonight’s headline act though and what follows is one of the most ambitious and impressively staged live shows Bellahouston Park has ever seen. The Manchester outfit arrive the night after two career-defining headline sets at Reading & Leeds, undoubtedly their biggest weekend as a band thus far, and while tonight’s gig doesn’t attract the same mammoth crowd or hold the same personal significance for Matty Healy and co, there’s no denying the electricity that’s in the air as the lights go down and we hear the first stabs of ‘A Brief Enquiry’s’ version of their self-titled intro track.

Only a band as confident as The 1975 would then open with a track that was just unveiled a couple of days ago. Accompanied by blinding yellow lights, ‘People’ sears with scuzzy aggression and defiance as it hurtles to its conclusion; a bold, daring and confrontational opener that feels like an almighty kick up the arse and a raw shot of adrenaline at the same time. It’s this world-beating attitude and thrilling sense of chaos that effectively set the tone for the night ahead.

‘Give Yourself a Try’ then fizzes with angst and tension while ultimate pop bop ‘TOOTIMETOOTIMETOOTIME’ is every bit as infectious as when we first heard it. With ‘Sincerity is Scary’, ‘It’s Not Living (If It’s Not With You)’ and the noodling non-stop funk of ‘Love Me’ in quick succession, the first part of the set is packed with crowd-pleasing bangers. They’re a band who have shown they can embrace any style they fancy from electronic experimentation to anthemic indie to glittering synth-pop to neo-jazz and we get it all tonight in an eclectic set that speaks to their constant evolution and inventiveness. 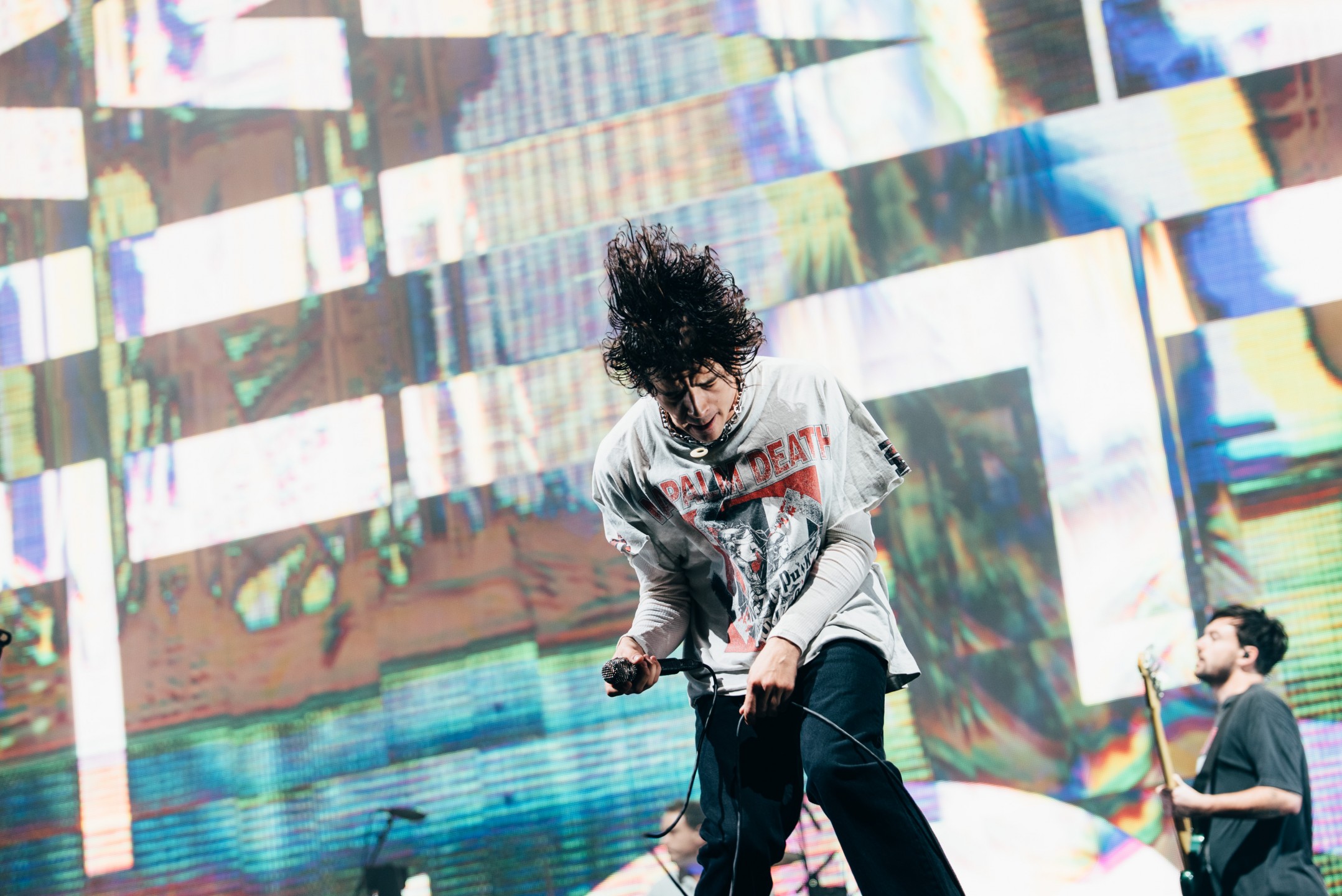 And it’s matched by the equally dazzling visuals on show. The entire production is relentlessly innovative, so vibrant and all-consuming that it perfectly unifies their back catalogue. With huge art-work mirroring rectangles framing different scenes and visuals taken from music videos and real life scenarios, they show just how creative a modern indie band can be on the UK’s biggest festival stages. More importantly, there’s nothing too staged or practised about it. They have been on the road for the large part of eight months but it feels just as vital as it did back in January at the SSE Hydro.

For all the tech wizardry and post-modern irony on show though, the band must be lauded for using their platform to champion important causes; and what a big platform it is. Deft but powerful moments start to appear around halfway through the set; from the band’s LGBTQ+ anthem ‘Loving Someone’ to the incendiary autotune-heavy anti-gun violence song ‘I Like America and America Likes Me’ that sees Healy jump down into the front of the crowd.

They deliver their most powerful message though at the start of the encore with a four minute recorded speech by teen activist Greta Thurnberg about climate change. ”If you look through history, all the big changes in society have been started by people at the grassroots level—people like you and me” her voice booms out to the audience. Written for the band’s upcoming album ‘Notes on a Conditional Form’, her words are projected big and bold onto the massive screens side of stage. Urging the crowd to right the wrongs of the previous generations, it’s an urgent demand for a change, a deeply moving call to arms that is administered beautifully and its message is reinforced even further when it is paired with the band’s now iconic anthem of the times ‘Love it if We Made It’.

There’s an added electronic preview of ‘Notes on a Conditional Form’ thrown in alongside a slew of older hits which please the longtime and casual listeners alike. Taking things back to simpler times, ‘Chocolate’ and ‘Sex’ from their debut incite mayhem but it’s left to the band’s ultimate closing card ‘The Sound’ to bring things to a truly euphoric finale as Matty Healy orchestrates the entire crowd to jump one last time.

For a band who have spent most of their career dividing opinion and dabbling in reinvention, it’s hard to think of any others who command such a presence in the current pop zeitgeist than The 1975. With a live show that is deeply personal as it is unifying, they are a band at the peak of their powers with a genuine ability to inspire. Where they’ll go from here though is anyone’s guess. 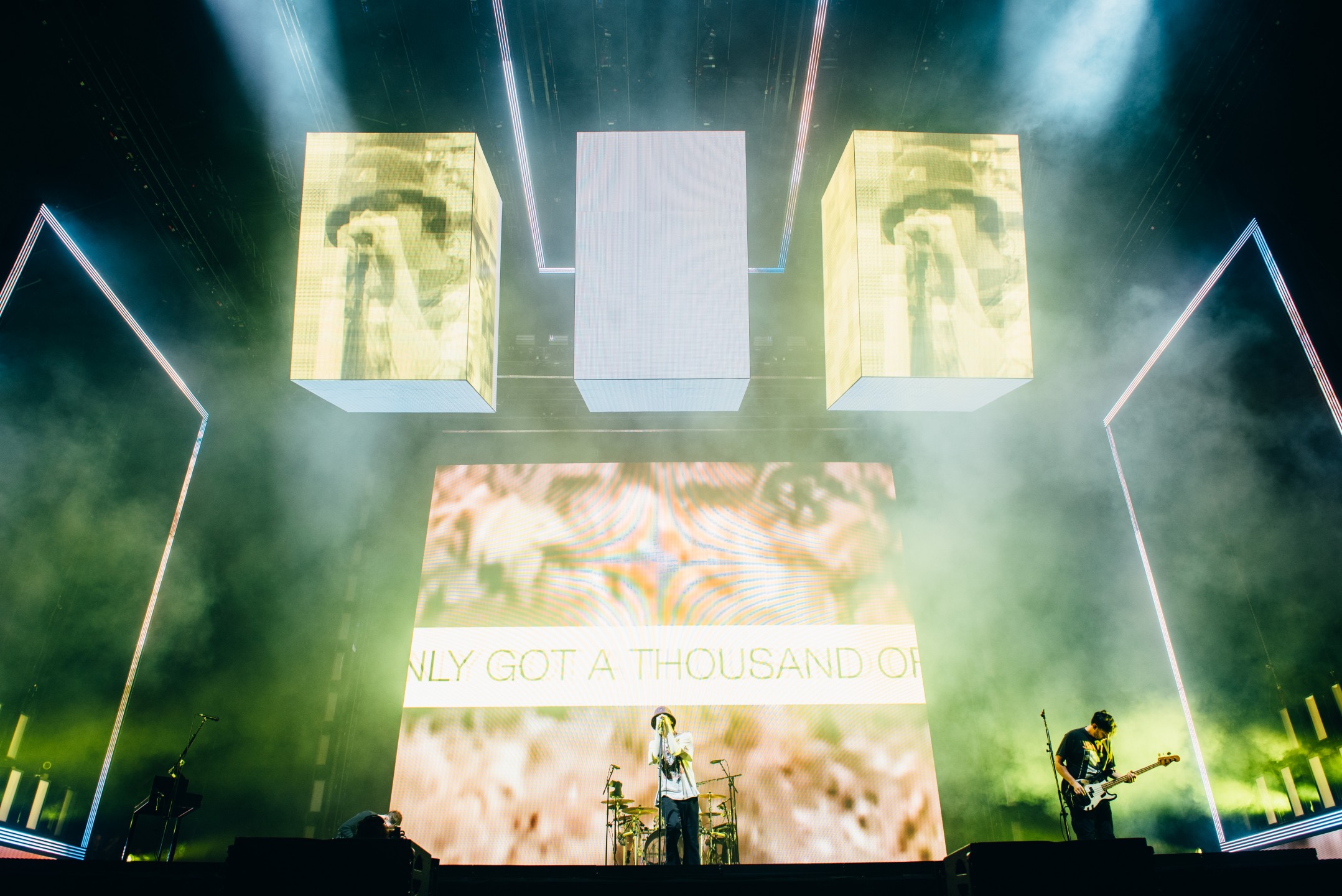