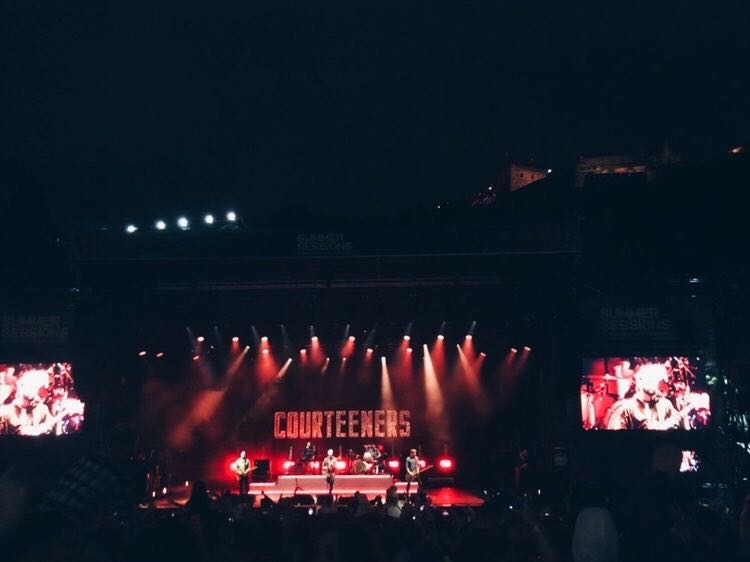 DAY eight of Edinburgh’s Summer Sessions saw Manchester heavyweights, Courteeners headline in Princes Street Gardens.. After playing to a sold out crowd of 50,000 in their home town in June, followed by a handful of festival appearances across the UK it was time to wind down their summer tour in the Capital.

Support came from Glasgow’s Heavy Rapids, 2019 winners of the Record Store Day Unsigned competition that saw them beat a number of other bands and artists to win their debut EP ‘Cash in Hand’ pressed into vinyl and released into independent records shops around the country. Their set was lively and full of energy from the opening track with frontman, Dillon, getting in amongst the crowd during the second song. These lads are certainly ones to keep an eye on in the future.

Just before Courteeners took to the stage, a Lone Piper walked on to play ‘Flower of Scotland’ to a rapturous reception from the crowd who sang along to every word.

Set opener ‘Are You in Love With A Notion?’ saw a number of multi coloured flares go off around the crowd to illuminate the sky very briefly. ‘Cavorting’ and ‘Acrylic’ both followed with the crowd constantly singing and bouncing during each track. Their set was full of songs from all five of their previous albums including ‘Summer’ from 2014’s ‘Concrete Love’ that even had the crowd singing along to the intro before frontman Liam Fray sang the first line.

After playing ‘The 17th’ the whole band left the stage, with only Liam and latest member Elina on keys returning to perform ‘Hanging Off Your Cloud’, a beautiful ballad that’s been included in live sets recently and is expected to be on the next album. “I can play one more, can’t I?” Liam asked the crowd before launching into ‘Smiths Disco’ , an early B Side that’s gained a cult status amongst fans since it’s release over ten years ago.

As the full band came back on stage they played another new track that’s expected to be on their upcoming album. ‘Heavy Jacket’ see’s Liam put his guitar down and really show of his frontman capabilities. This could easily be a future single, with riff laden verses and an anthemic chorus it fits in perfectly well to the set that’s already full of fan favourites.

Closing the set with ‘Modern Love’, ‘Not Nineteen Forever’ and ending with ‘What Took You So Long?’ they ended not only their only Scottish date of the year so far, but their summer tour in fine style. They’ve come a long way since bursting onto the scene back in 2007 but it’s clear to see Courteeners have gained a following that will stay with them for a long, long time.

The 1975 at Glasgow Summer Sessions