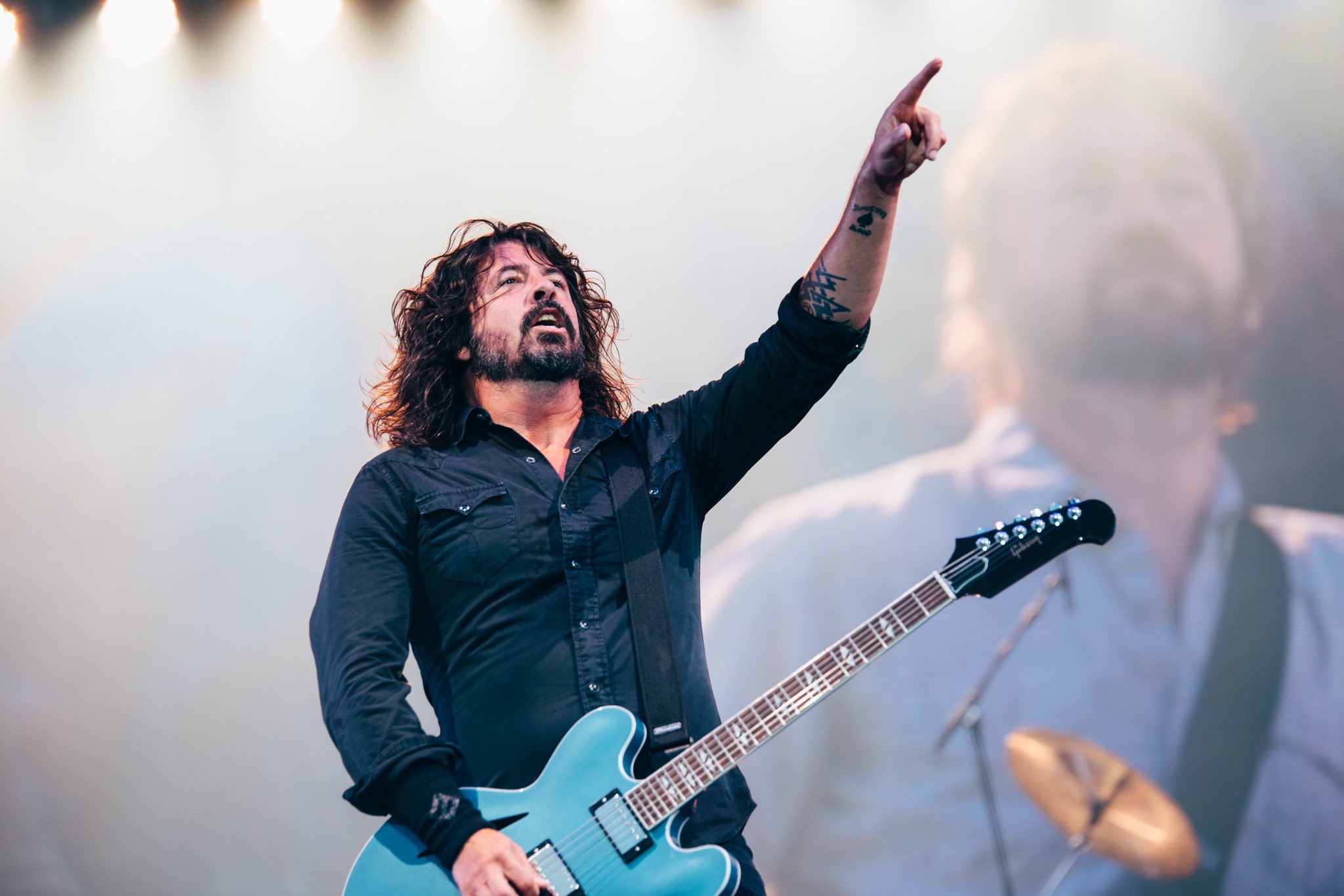 “YOU know why we came back?! We came back to play rock and roll! Are you ready for rock and roll?” Dave Grohl roars out to Bellahouston Park. He certainly doesn’t take long to deliver on that promise; within the first hour we are treated to iconic hits like ‘The Pretender’, ‘Times Like These’, ‘Learn To Fly’ and ‘Run’. At their first Scottish gig in four years, Foo Fighters deliver a sheer masterclass in the art of festival headlining. They’re born entertainers, relentless pros at their craft and their marathon two and a half hour set brings spontaneity, enthusiasm and non-stop rock to the sold out festival site.

The party gets started early in the afternoon with an incredible supporting line-up featuring some of the best alt-rock bands the UK has to offer. Fast-rising Manchester outfit Hot Milk blow the cobwebs away with their opening set before Glasgow band The Van T’s emerge to play their biggest hometown show to date. It’s a massive milestone moment for the group and one they don’t take lightly. Very much at home in their new gargantuan surroundings, they make their presence known with one big hitter after another such as ‘Suis-Je Cool’, ‘Bittersweet’ and ‘Fun Garcon’, all seismic riffs, grungy hooks and swirling harmonies. With some serious shredding from Chloe Van Thomspon thrown in along the way, it’s fair to say the band will have come away with a great number of new fans – even if just for their post-show Buckfast antics with Dave Grohl. 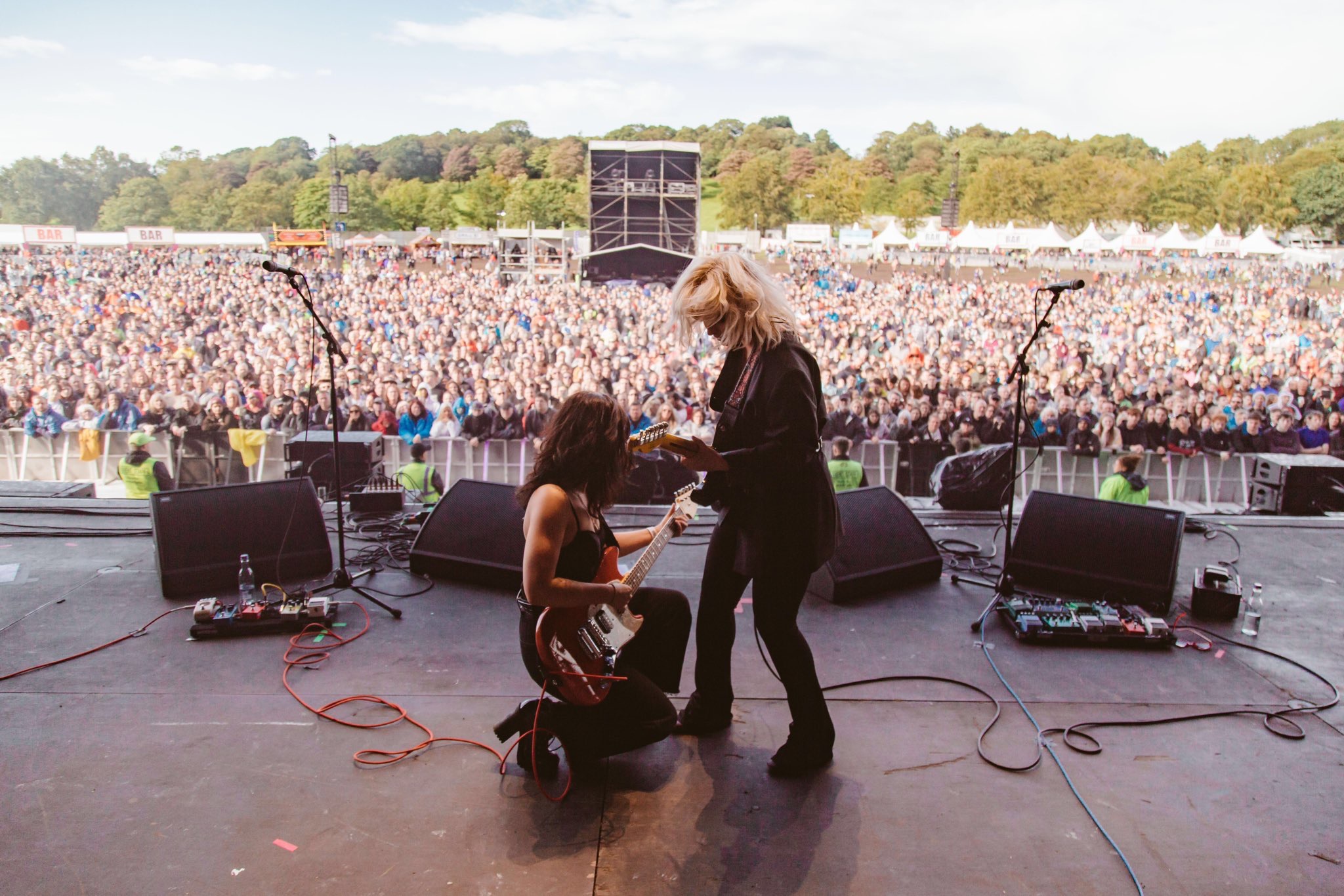 They make way for Frank Carter & the Rattlesnakes who rise to the occasion once again after an incendiary display at last year’s festival. Getting up close and personal with the crowd from their very opening track, Carter makes a promise to be “the best support band in history” as they tear through pummelling hits like ‘Tyrant Lizard King’, ‘Butterfly’ and ‘Wild Flowers’. In amongst all the chaos, the frontman speaks about creating a safe space for women and encourages female fans to open up a circle pit and they don’t hesitate. It’s a thunderous, energetic set that is as thrillingly chaotic as it is passionate and cathartic. 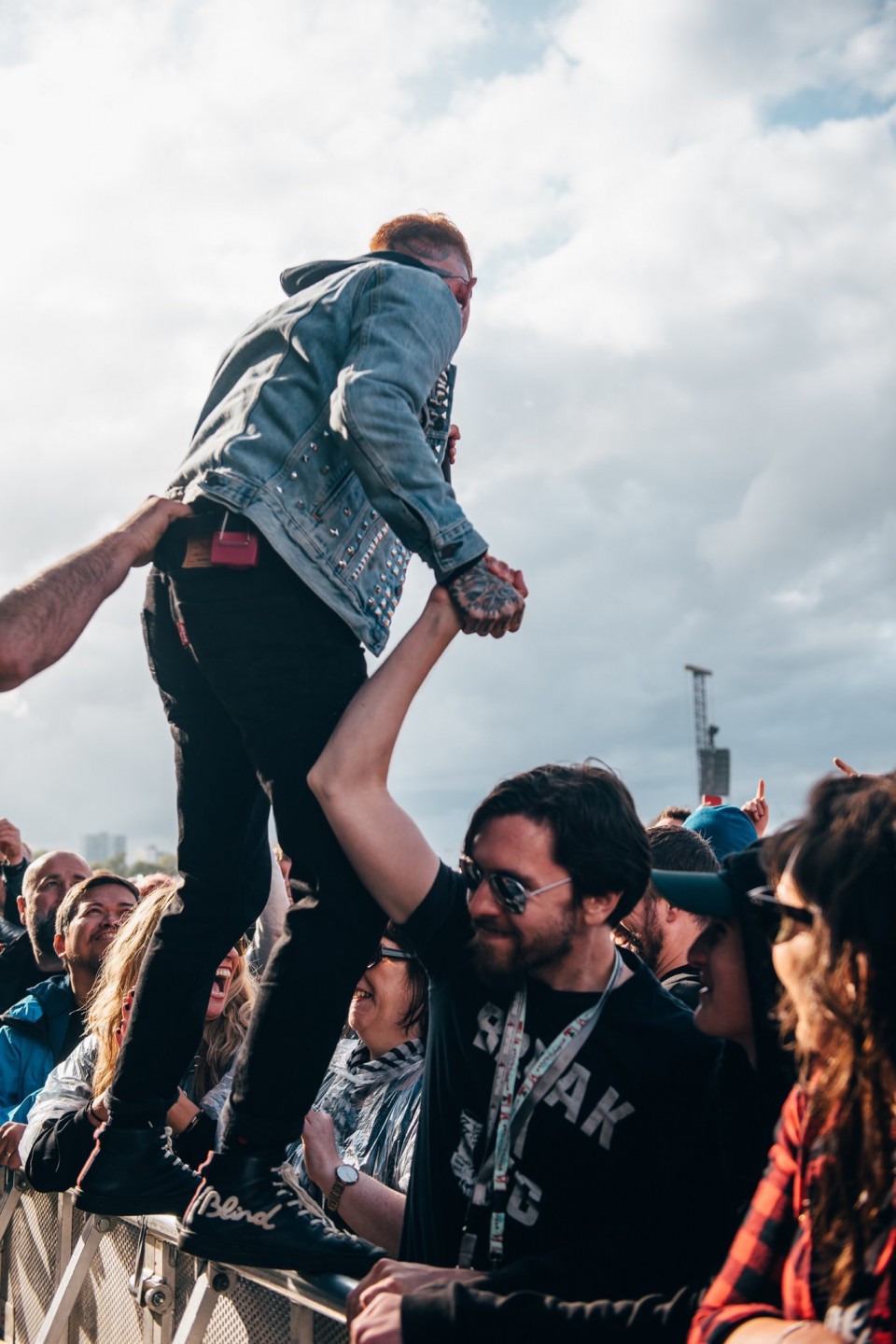 Slaves keep the energy high on the penultimate slot of the day. Laurie Vincent shreds wickedly on the guitar as Isaac Holman pummels away at his drum kit, goading the crowd with some of his signature anecdotes and acerbic wit. Tearing through cuts from their Mercury-nominated 2015 album ‘Are You Satisfied?’ and 2016’s Top 10 album ‘Take Control’, their primal riff-heavy punk and crowd-baiting anthems may not get the same reaction as they would on a sweaty night at the Barrowlands but that’s got everything to do with the very near arrival of the headline act. ‘Foo Fighters will be on soon’, Holman mutters with resignation.

When the Foo Fighters do arrive, they go wild. This crowd have been ready for this show from the moment it was announced, and subsequently sold out in an astonishingly quick amount of time. No amount of mud is going to quell their enthusiasm.

And sure enough, the last four years have been worth the wait. Launching into an unlikely set opener ‘Stacked Actors’, the crowd’s excitement then reaches a new peak with one bludgeoning anthem after another – ‘The Pretender’, ‘Learn to Fly’, ‘Run’ and ‘Times Like These’ all get early plays. Revelling in the electric atmosphere, Dave Grohl shouts out “I’m glad we came back to this place man, it’s been too long. We’ve got 25 years worth of songs to play tonight” 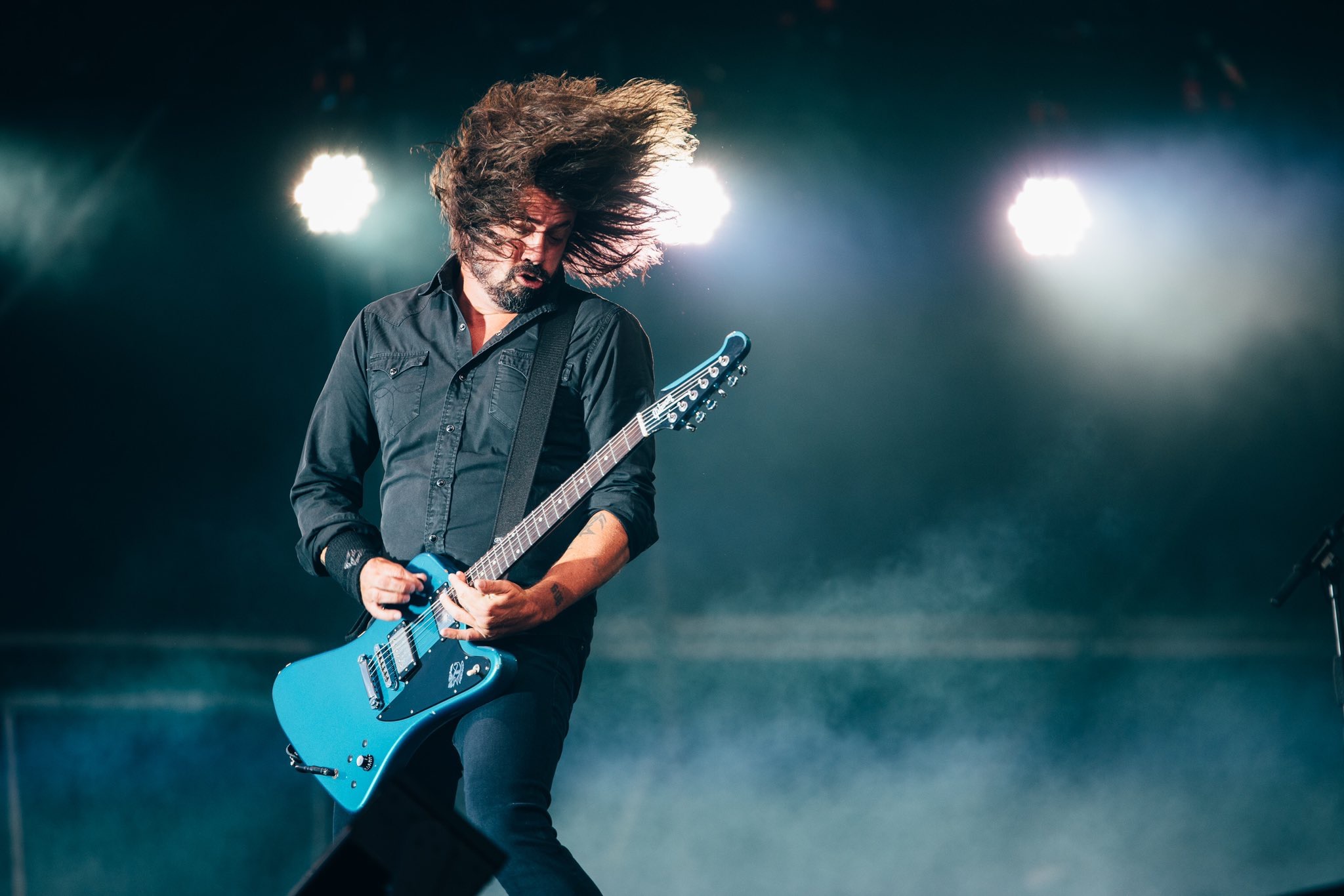 And that’s exactly what the crowd get – a phenomenal career-spanning set that touches down on all their finest moments. With all the showmanship and heartfelt enthusiasm on show, it’s easy to see why they’re a band who have inspired such devotion from fans over the years. ‘My Hero’, which opens as a Dave Grohl solo, is emotional and cathartic and sees thousands of arms held aloft in the air while ‘All My Life’ is ferocious and thrilling; a throat-shredding moment which is dedicated to The Cure’s Robert Smith after his own long awaited return to Glasgow the night before. We are treated to a show-stopping drum solo from Taylor Hawkins which sees him elevated well above the stage before he and Grohl swap roles for a jagged cover of Queen’s ‘Under Pressure’. There’s snippets of Chic, Thin Lizzy thrown in for good measure over the band introductions aswell as a crowd-pleasing burst of ‘Flower of Scotland’ which incites a mass singalong.

They’re a band who have learned from the best but they deliver their old arena-rock clichés with a wink and a smile. You can’t help but grin as Dave Grohl teases the crowd or Taylor Hawkins opens up a call and response singalong. It’s expert showmanship from one of the premier rock bands of this generation.

Longtime fans are treated to a tour debut of ‘I’ll Stick Around’ and The Colour and Shape’s ‘Hey, Johnny Park’ and there’s a sweet moment during Concrete and Gold’s ‘Dirty Water’ when Dave Grohl’s 13 year old daughter comes onstage as one of three backing singers.

It’s all about the hits though and the likes of ‘Monkey Wrench’ and ‘Best of You’ incite mass singalongs before a cover of AC/DC’s ‘Let There Be Rock’. It’s left to ‘Everlong’, which is dedicated to Dave Grohl’s Edinburgh-born monitor engineer of 30 years, to see the gig out in truly euphoric fashion. It’s a triumphant show from a band who can do no wrong. 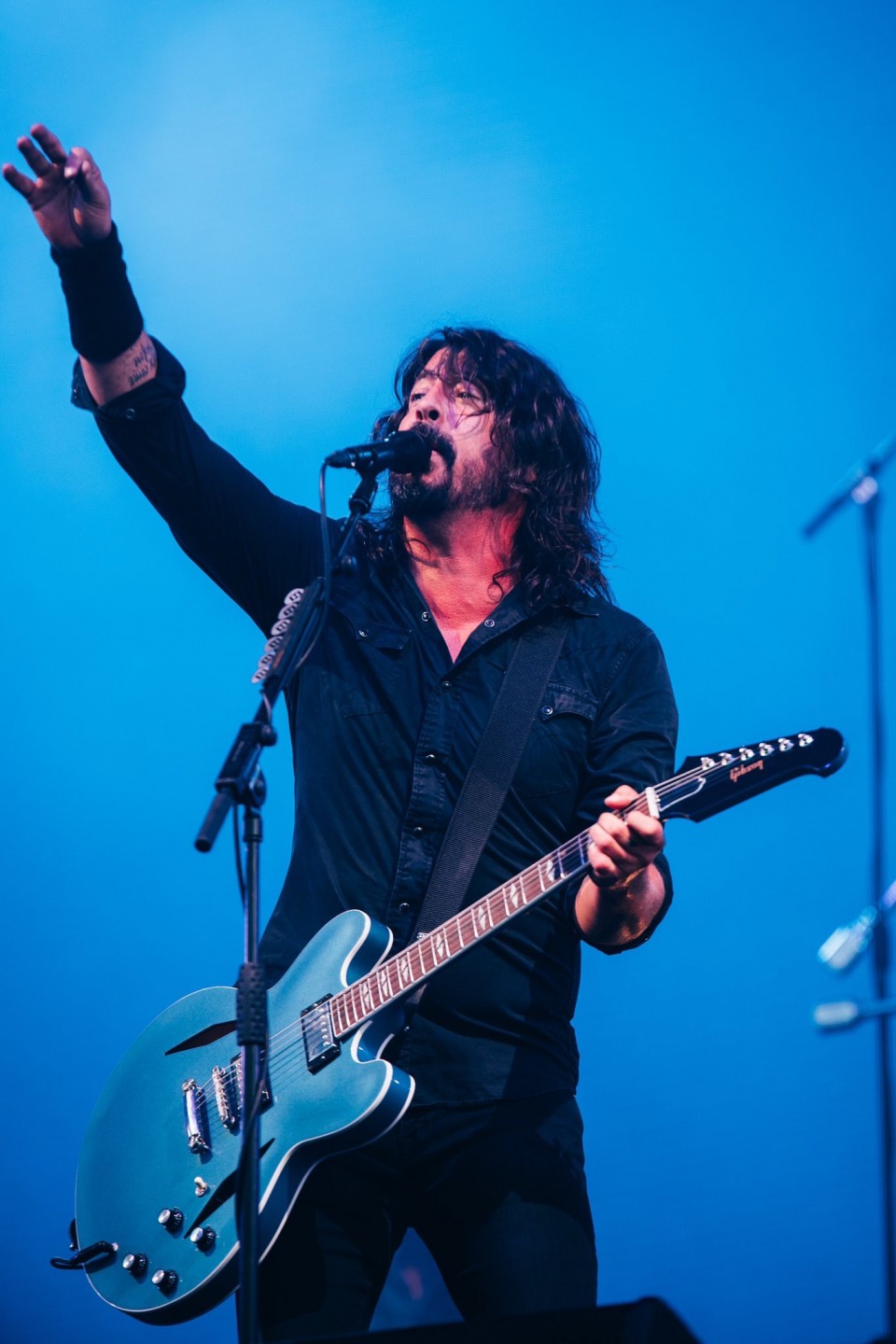 FESTIVALS: Øya Festival with The Cure, Tame Impala, Sigrid, Idles and more...

The 1975 at Glasgow Summer Sessions