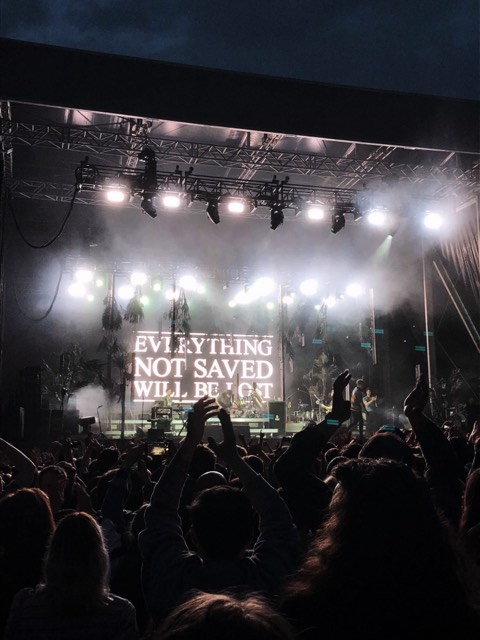 FOALS deliver a masterclass in muscular, funk-laden arena-rock at the SWG3 Galvanizer’s Yard in front of a sold-out Glasgow crowd who refuse to let the weather dampen their spirits.

The band’s formidable live reputation has seen them go from frenzied house parties in Oxford to massive festival spectacles at Reading & Leeds, Glastonbury and more in recent years and this outdoor gig displays their arena-conquering credentials in abundance. Delving into all five of their albums, they perform a career-spanning set; treating fans to the intricate riff-work and unashamed noughties indie club bangers from their debut Antidotes all the way through to the more beefy and expansive tracks found on their most recent record Everything Not Saved Will Be Lost Part 1 which arrived earlier this year.

Unfortunately the weather is not on their side as they take to the soggy stage at around 9pm and the atmosphere, much like the temperature, could be described as slightly undercooked. However, an impressive opening salvo of ‘On the Luna’ and ‘Mountain At my Gates’ quickly brings the crowd onside with frontman Yannis declaring “I tell you what, we’re going to have f***ing good craic tonight”.

Arriving in the midst of a UK tour in support of Everything Not Saved Will Be Lost Part 1, it’s no surprise that many of the new songs feature throughout the set. The latest instalment in their ever-morphing sound, the album saw the band embracing a new world by looking back and forward at the same time; reintroducing their complexities but channelling them through a decidedly beefed-up production. With Part 2 to follow later this year, it marked the beginning of an exciting chapter for an outfit who are very much at their confident best.

What is particularly impressive tonight then is how the band meander through all five albums and their distinctive sounds so effortlessly. They smoothly segue between songs that were never really meant to be placed together with an adeptness and confidence that is enthralling to witness. The muscular ‘Mountain At My Gates’ and ‘Snake Oil’ edge into the palpable exuberance of Antidotes highlight ‘Olympic Airways’ which then morphs into crowd favourite and indie club favourite ‘My Number’.

‘Everything Not Saved’s sprawling epic ‘Sunday’ is a fine example of their ability to bring their stadium-sized ambitions together with some funky club vibes as its grand, sweeping soundscapes morph into a thrilling, almost psychedelic burst of energy. However, 2010’s ‘Spanish Sahara’ remains one of their most powerful cuts. Bathed in a swirling blue haze, the crowd sing along to the ‘leave the horror’ hookline in what is perhaps the most spell-binding moment of the night.

Effortlessly mesmeric and bulldozing in equal measure, it’s clear that this is a band who are at the top of their game. They are tighter and more confident than they’ve ever been before as they tear through their magnificent back catalogue. And after the departure of bassist Walter Gervers, Everything Everything bassist Jeremy Pritchard comes in to give the band a lithe readiness.

However, all eyes are on Foals’ talisman Yannis Philappakis who is in incredible form; when he is not taking centre stage he is jumping down into the crowd, walking through his adoring fans with his guitar in hand. “Glasgow’s never let us down. Barrowlands every time. Let’s keep it going forever,” he says. As the band have got bigger and bigger over the years, he has transformed into a magnetic performer – not averse to spots of rock shamanism as he commands an army of fans to move with every flick and strut.

The final third of the gig sees them go on a riotous run with many of their recent tracks finding the perfect balance between heavy rock and dance. They pull out all the stops with the potent ‘Exits’, dancey Radio 1 favourite ‘In Degrees’ and the spectacular and visceral ‘Inhaler’ which shifts from choppy funk to brutal riffs in incendiary fashion. A track which continues to incite utter chaos, it stretches to around eight minutes in length in an incredible display of musicianship, allowing Yannis to swagger through the frenzied crowd down at the front. A customary encore follows with the ferocious, bulldozing ‘What Went Down’ and old classic ‘Two Steps Twice’, both of which keep the party going in full flow.

Expertly weaving new cuts into established classics, Foals are an unstoppable live force. With a history of tearing both massive and miniscule venues asunder, they have risen to a whole new level and tonight reminds us why they deserve a seat among the very best of British guitar rock.