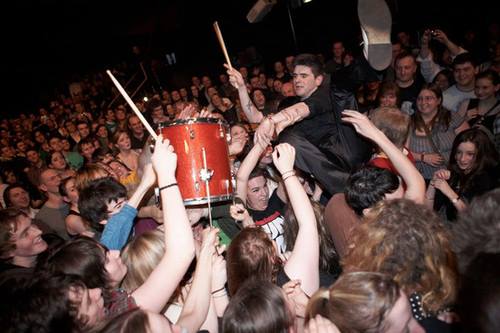 ONE of the most successful Scottish bands of all time came back to play a small hometown gig in university venue, QMU. The Glasgow gig is for promotional purposes to give the lucky fans that were able to get a ticket a taste of the new album Right Thoughts, Right Words, Right Action.

The band took to the stage just after 9:00 PM and Alex Kapranos is here for the night, working the crowd from the offset. The band kick into the first track, “Right Action” which is the first single from the new album. This gets the crowd dancing , the funky beats and guitar sounds strong and catchy throughout. Its a track that shows Franz Ferdinand at their best and the kind of music a band of their calibre should be creating at this stage in their career.

As Nick McCarthy starts the riff of Tell Her Tonight the late-comers of the night rush in to get to the action in the centre of the dance floor. As Paul Thomson provides the disco beats, Kapranos lapped it up on stage constantly on the move, showing true showmanship at its finest.

No You Girls follows suit. it begins to be played by the band with a new fast tempo, but it then calms back down to the original tempo, personally I prefer it this way as it has a rough edge to it. New track Evil Eye is next, which is driven by the drum and bass working together with the guitars combining to create the dark riffs. At the end of the track Kapranos pays tribute to the crowd and to one fan at the front who has been singing his heart out to every song (including the new ones.)

The fantastic Do You Want To has most of the venue bouncing and singing along. The audience are asked to sing and join in at the break down singing “lucky lucky, your so lucky” over and over again until the band are ready to end the song, the term ‘in the palm of their hands’ comes to mind here.

Debut album hit Dark Of The Matinee is next followed by Fresh Strawberries, Walk Away and new track Stand on the Horizon. A nice moment you don’t see to often in the world of music, frontman Kopranos takes time to give a special mention to his mum whom is sitting in the balcony, dedicating the next song to her and asking for the spot light to be shone upon her. This was an endearing couple of minutes that really showed what a gig like this means to the Glasgow band.

Kick starting The Fallen with Thomson’s tight beats- his revolutionary playing is again on show for this as the energetic track gets the crowd dancing. Another track from R.T.R.W.R.A is up next, a high tempo song called Bullet. Its the first time many have heard this track and out of all the new ones this evening, this is a personal favourite. It has a punk feel to it straight away with the simple guitar playing and this, combined with the vocals, gives it an amazing raw sound.

The set has been a great mix of fresh and classic tracks, and with the last couple of songs extremely up-tempo, it is the perfect time for a Thomson drum solo to build up to an introduction of each member of the band. As the guitar riff begins and the crowd realise which track is about to begin, This Fire sends them into a frenzy which also seen guitarist McCarthy crowd surf for a short time while playing his lead line which is quite impressive actually.

But the biggest crowd pleaser of the night was only going to be one track, Take Me Out. As you’d expect, this had the whole crowd dancing and chanting the guitar riff back to the band.

This was one of the most impressive gigs of the year, Franz Ferdinand proving yet again that they remain masters at putting on a live show that pulls a mixture of music fans together as one. Tonight has given fans a first taste of the new material which only proves they are still able to create catchy indie pop songs that will win fans both sides of the atlantic.