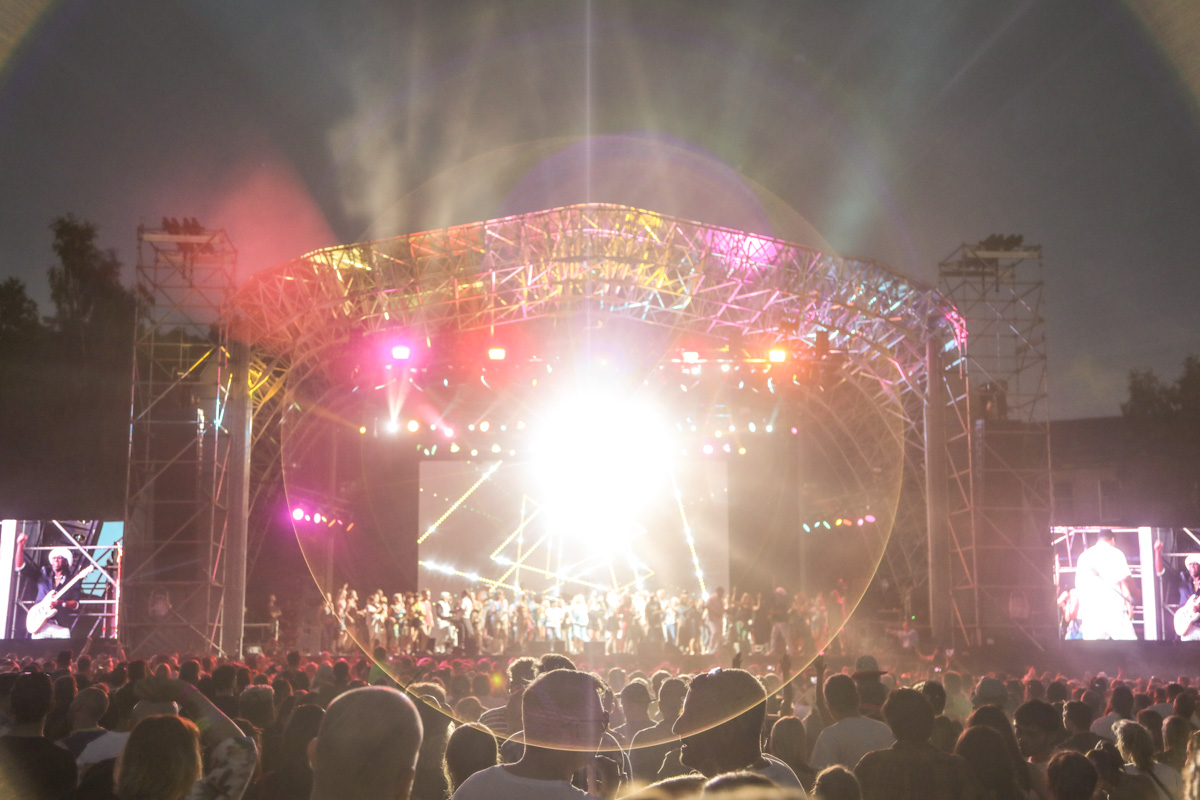 BUILT around the simple and universal ethos of “Freak Out Let’s Dance”, Nile Rodger’s FOLD event may have had incarnations in other parts of the world but it’s hard to imagine that he could hope for an audience that would adhere to those instructions more than those that flicked to Kelvingrove Park at the weekend.

A melting pot of all denominations, creeds and ages, FiestaXFold came complete with an ambiance that was entirely alien to any other festival. Family friendly yet uncompromising all at once, the spirit of unity, harmony and acceptance that seemed to be embedded into its fabric and collective minds of attendees made a security or police presence seem entirely redundant.

The antithesis to the overt corporatism of many of the festivals that artists on the bill are likely accustomed to playing, the exuberance of the crowd that basked in the unprecedented Glasgow heat was reciprocated by the artists that took centre stage.

The epitome of exuberance in a genre that  has been intermittently besieged by Poe-faced poseurs in its history, New York based hip-hop trio De La Soul turned in a set that brought the spirit of the genre’s liberating origins to the picturesque surroundings of Kelvingrove Park. With a set comprised of classics from their seminal debut album Three Feet High & Rising… onwards, the hivemind of Posdonous, Trugoy and Maseo (who would further educate and enlighten the crowd with a DJ set over on Juey Morgan’s Block Party stage) knew exactly how to whip the crowd into a frenzy and even keep the agnostics and casual observers on tenterhooks over the course of their hour long set.

After a brief reprieve and enough time to gather your composure, the architect of the festival would soon descend for his first of two consecutive sets this weekend. Unlike many other artists of his stature, there’s an authenticity to Nile Rodgers that remains intact and his rapport with the crowd was refreshingly informal and off-the-cuff. Striding out onstage in a brazenly vibrant red tartan suit, Nile was quick to explain that he had  been at the revered Abbey Road Studios and thus would have to line-check before the capacity crowd.

While this would have the potential to be perturbing from anyone else, getting the chance to witness Nile and his incomparable band tune up and fire off a few licks of that instantly recognisable guitar tone immediately registered as a privilege when you consider its omnipresence in the last 40 years of popular culture. After further retooling and light-hearted interactions with the crowd, the spirit of Chic’s heyday was well and truly summoned as breakout hit ‘Everybody Dance’ soon burst into life with authority. Although the crowd may have been tentative for the first 30 seconds or so, the tone for the evening was soon set as its iconic refrain was bellowed out with enthusiasm by the entirety of Kelvingrove. A continuation of exploring the early aspects of their career, the ebullient sounds of ‘Dance, Dance, Dance (Yowsah, Yowsah, Yowsah)’ kept the momentum high before the singalongs commenced once more on ‘I Want Your Love.’

As is well documented, to only delve into his collected works under the CHIC moniker alongside his late collaborator Bernard Edwards would be to do himself and the crowd a disservice and thus the enraptured crowd were soon taken on a whirlwind tour of his work with a who’s who of acclaimed stars. From soul starlets such as Diana Ross and Sister Sledge to pop icons including Duran Duran and a cathartic version of Madonna’s ‘Like A Virgin.’ As the strains of ‘My Feet Keep Dancing’ burst into life and implore everyone in attendance to do exactly that, the sheer power of Nile and the disco movement that he helped popularise can’t help but wash over you. Nearly 50 years since it was first spawned, the prevalence of this joyful genre has remained at the forefront of culture and it is good to see that it resonates with so many young people that never had to see it become misaligned courtesy of the prejudiced ‘disco sucks’ movement of the late 80’s. What has become clear in hindsight is that the music of New York’s club scene was every bit as innovative and pivotal as the CBGB’s based counterparts that spearheaded punk music and it has never seemed so evident as while standing shoulder to shoulder with this diverse crowd at Fiestax Fold 2018. 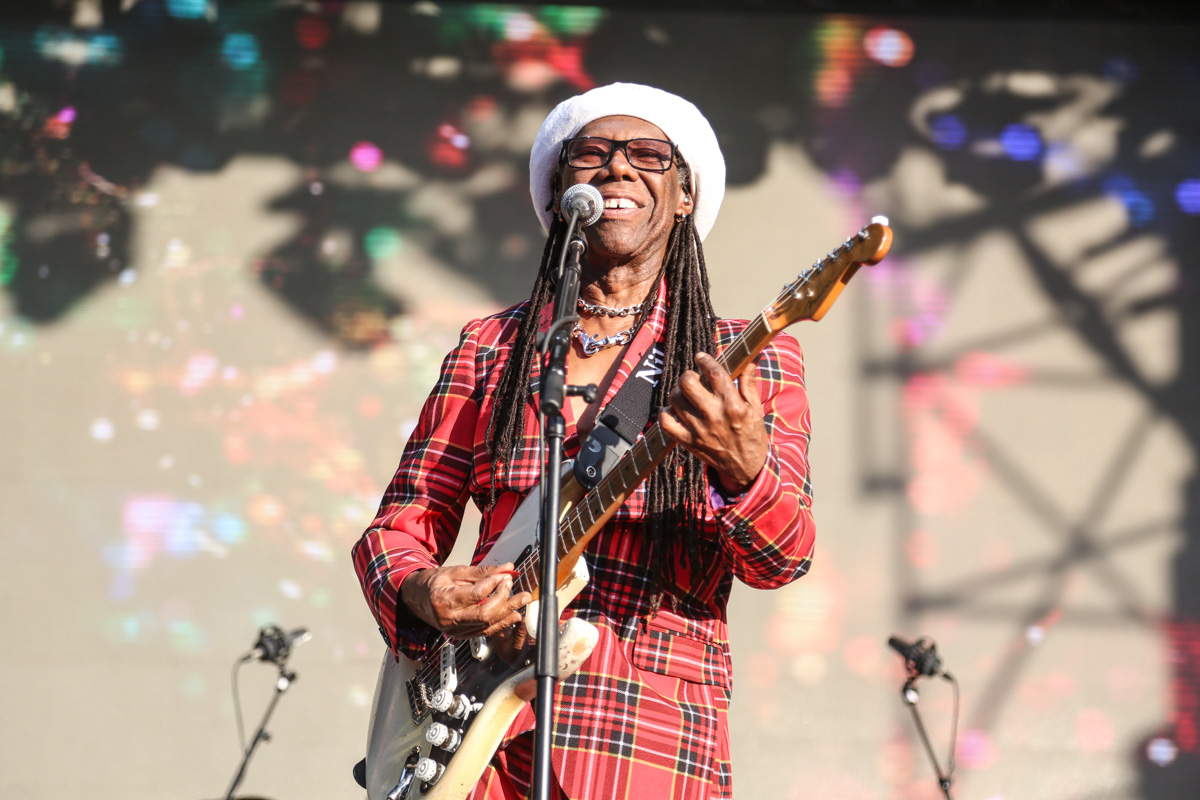 After the sheer ecstasy of the concluding moments of Chic’s set (more on that later), Earth Wind and Fire would’ve been forgiven for any fretfulness about following that up but it certainly didn’t show as they descended upon the stage with a quiet confidence.  Leaping into action with Gratitude’s ‘Sing A Song’, the adeptness and musicality that had been the calling card of their glory days has never left them and the ingenuity at the core of their sound still retains a futuristic quality to this day.

Thoroughly emphasised on such stellar exemplars as ‘Shining Star’ and ‘Serpentine Fire’, the fusion of disco, soul, funk and latin music that their sound forefronted is incomparable and set the stage for sonic visionaries in these genres for decades to come. Undeterred by the fact that a lot of those in Kelvingrove were biding time until one or two big songs would emerge and instead catering to their fanbase, tracks such as their exuberant re-imagining of The Beatles’ ‘Got To Get You Into My Life’, the effortlessly smooth ‘After The Love Has Gone’ and ‘Reasons’ exemplified all which makes them so enduringly vital and justified their cemented legacy in music. Although the charismatic presence of their late figurehead Maurice White was notable to say the least, Philip Bailey’s sheer vocal range that encompasses both his own lauded falsetto and compensates for his cohort’s absence is a sight to behold and the cast of backing vocalists ensure that the sound is affecting and galvanising whenever required.

As if they hadn’t whipped the faithful up into a frenzy enough, the concluding trio of ‘Boogie Wonderland’, ‘Let’s Groove’ and ‘September’ incited pandemonium among the crowd and ensured that the first day of the festival was brought to a close on an emphatic high.

With the unflinching suns still intact, day two would soon see Goldfrapp break out of their comfort zone and continue to flourish in unfamiliar territory. When you hear the engulfing sound of this London-based duo, it’s primarily associated with cavernous, strobe-adorned venues in which the only light you see is that which emanates from the stage. Whereas at 5pm on a sweltering Sunday in Glasgow, it could be potentially jarring or a bit incongruous to revel in their decadent material. 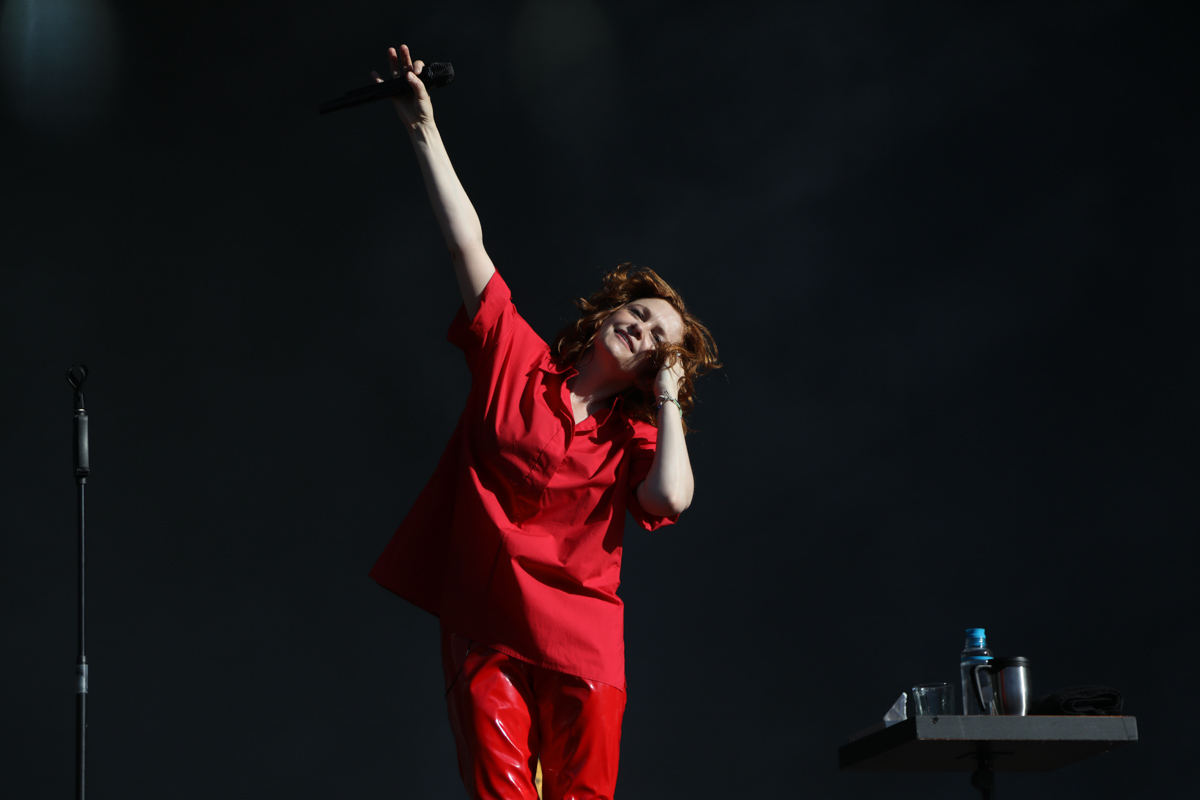 Fortuitously, Alison Goldfrapp, Will Gregory and their accomplished band are enthralling enough that the change in circumstances has no adverse effect. Clad head to toe in piercing red, Alison commands the stage and consequentially the audience effortlessly and adds to the enthralling magnetism of the material. Ranging from chart-bothering fare such as ‘Train’, ‘Black Cherry’ and ‘Ooh La La’ to celebrated fan favourites such as’ Ride A White Horse’, Become The One’, ‘Number One’ and ‘Systemagic’, their inclusion at the festival makes perfect sense given that their material’s lineage can be traced all the way back to the early days of Giorgio Moroder’s hypnotic disco odysseys. Filled with riveting basslines, ethereal vocals and heavy-hitting percussion, the immediate setting clearly doesn’t matter as Goldfrapp are more than equipped to transport you to an aural dimension of their own devising.

The perfect way to round off the weekend, the second appearance of Nile Rodgers’ Chic proved that those in attendance on the previous day weren’t given any truncated set and that they wanted to ensure that everyone got the same engrossing experience from them.  A veritable tour-de-force that saw Rodgers whip a  receptive and malleable crowd into a frenzy, his inclusion of Daft Punk’s ‘Get Lucky’ was prefaced by a touching monologue about his battle with cancer and how it reinvigorate both his lust for life and his desire to create. Bringing proceedings to a close with an uproarious rendition of ‘Good Times’ that not only saw audience members flock to the stage but also nodded towards his status as a hip-hop forebearer by incorporating Wonder Mike’s verse from The Sugarhill Gang’s ‘Rappers Delight’, we can only hope that Niles’ offhand theorising about Fiesta x FOLD becoming an ‘annual thing’ can come to fruition in the years to come.