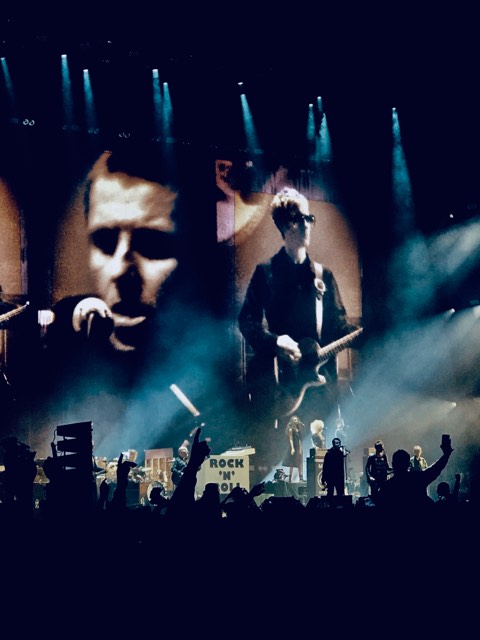 ‘LIAM LIAM’ is the cry that rings round the SSE Hydro as thousands of excitable punters pile into the arena. If you’ve been to a Liam Gallagher gig – or even an Oasis one before it – you’ll know exactly what to expect on this particularly rowdy Friday night in Glasgow. As soon as Dylan John Thomas and DMA’s have warmed everyone up, it doesn’t take long for the chants to start. ‘I am the Resurrection’ by the Stone Roses blares over the PA, pints are flung in the air and the crowd start to lose their collective mind. The atmosphere is electric and if anyone can capitalise on it then it is Liam Gallagher.

Strutting onto the stage to ‘Fuckin in the Bushes’ as if he is about to enter a boxing ring, the venue erupts into chaos with the opening chords of ‘Rock N Roll Star’. Coat on and hands clasped behind his back, he manages to gain an entire set’s worth of momentum in four short minutes. “Tonight I’m a rock and roll star” he sings, nailing the chorus and conjuring the kind of all-consuming euphoria that only comes hand in hand with a timeless classic.

Over the last couple of years, the former Oasis frontman has experienced an upsurge in popularity. Recent chart-topping album ‘Why Me? Why Not’ built on the success of his 2017 solo debut ‘As You Were’, leading to sold-out arenas all over the country and an added relevance and credibility that he hasn’t really seen since the mid-2000s.

While his older brother Noel has opted to broaden his horizons through his High Flying Birds project, often posing quite a cynical and curmudgeon-y figure in the press, Liam’s public persona has been revitalised. Whether it’s channelling the swaggering spirit of yesteryear as the self-proclaimed “last rockstar” or hitting out with comical quips or outbursts on social media, the frontman’s reputation as ‘man of the people’ is as strong as ever.

You only need to look at the crowd to appreciate his staying power. From the moment he enters the stage, eyeballing the front row as if to bait them, he has the room’s avid attention. Over ninety adrenaline-charged minutes, we watch as he stays mainly rooted to the spot, belting out one rock’n’roll anthem after another with that trademark sneer. Utterly magnetic from start to finish, he radiates raw power and energy. You just can’t take your eyes off him.

The venue is packed to the rafters with devoted fans from the nineties reliving their youth and a new generation of indie fans who have helped to make his two solo records such successes. Ensuring the gig is more than just a nostalgia train, they sing along passionately to recent hits like ‘Shockwave’, ‘Wall of Glass’ and ‘For What It’s Worth’; the latter of which transforms from saccharine ballad into a rousing communal singalong that sees the crowd take over.

It comes as no surprise that his long and bitter feud with brother Noel isn’t far from his mind. “I want to take this opportunity to apologise for my little brother and the shit he said about your country” he says in reference to Noel’s recent “third world country” jibe. “Scotland’s the bollocks and so are the people”.

He needs to do no winning over of course; he is very much preaching to the already converted. Every movement and utterance is met with a roar from the euphoric crowd. With founding member Paul “Bonhead” Arthurs deployed on many of the classics, it also helps that about 50% of tonight’s set is made up of early Oasis material – rather ironically all written by Noel. Yes, his brother may have penned the likes of ‘Morning Glory’, ‘Supersonic’, ‘Stand By Me’, ‘Gas Panic!’ and ‘Wonderwall’ but as Liam once said bluntly on Twitter “He wrote ‘em, I sold ‘em”. Where the frontman succeeds is his ability to conjure the spirit of those mercurial years with renewed vigour and supersonic confidence. And after the recent revelation that he’s been taking greater care of his vocal chords, the 47 year old Liam’s voice sounds as raw and bullish as it did 25 years ago. You just can’t imagine anyone else singing these songs with the same unwavering swagger.

It’s no shock that when placed alongside one another, the era-defining anthems of the 90s upstage his more workmanlike solo material but the crowd don’t mind a bit. Landing somewhere around Oasis’ ‘Heathen Chemistry’ and ‘Don’t Believe the Truth’ era, the recent tracks are brimming with stadium-sized choruses and misty-eyed nostalgia, effectively channelling his Britpop bluster into a glossy 21st century pop-rock template.  ‘Why Me? Why Not’ highlight ‘Once’ is a nice halfway point for the set, bringing the tempo down while allowing his voice to shine. It’s a torches-in-the-air moment of introspection that finds the frontman reflecting on a life lived at full speed.

When things threaten to mellow out, a pulsing rendition of ‘The River’ (with his son Gene on drums) is rapturously received before ‘Gas Panic!’ from Standing on the Shoulders of Giants is given a surprise run-out, pleasing the biggest diehards alongside a moving singalong to ‘Wonderwall’.

However, it’s the encore that ensures the night ends in triumph. The fact that ‘Acquiesce’ was only an Oasis B-side all those years ago is testament to the band’s songwriting prowess in those early days. And as one of the rare recorded examples of the two brothers sharing lead vocal duties, its left to the crowd to pick up Noel’s soaring chorus in a unifying moment of sheer euphoria. ‘Supersonic’ and ‘Roll With It’ follow, as stomping, vital and unrelenting as ever before a gorgeous, atmospheric take on ‘Champagne Supernova’.

Emerging one final time to send the crowd into a frenzy with ‘Cigarettes and Alcohol’, it’s a thunderous end to a brilliantly crafted set. A gig that moves well beyond just nostalgia, it’s a reminder that Liam Gallagher is exactly where he should be. As the lights go up, he remains rooted to the stage to bask in the crowd’s admiration, every inch the rock and roll star. Whether he gets his desired Oasis reunion or not, we get the impression that he’s here to stay.