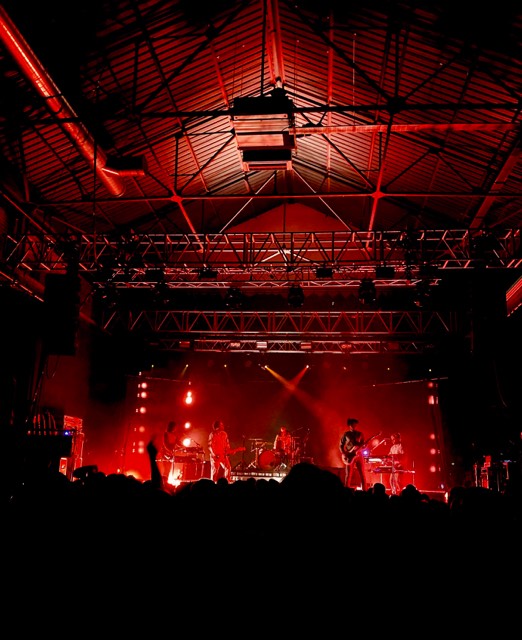 A month on from their frenzied performance at Tenement Trail, Brighton’s Squid return to Glasgow to support Metronomy on a cold November night at SWG3. At first glance, the madcap post-punkers may seem like an unexpected choice to support the electronic group but much like their North London counterparts did at the beginning of their career, Squid are quickly building a reputation for their irrepressible creativity and refreshing experimentalism. And while their set doesn’t receive the same excitable response as it did at BAaD last month, the quintet demonstrate exactly why they’ve been hailed as one of Britain’s finest new live guitar bands – rampaging through pounding rhythms, meandering jazz interludes and angular, abrasive riffs seamlessly and with piles of energy. Much like Metronomy, they have an ability to make the most avant-garde noises sound accessible, bringing things to an end with a vigorous rendition of ‘Houseplants’.

Tonight’s headliners make their return to Glasgow after over two years, fresh off the release of their sixth album ‘Metronomy Forever’. They emerge onto the dark stage clad in matching boiler suit uniforms and swathed in blue lights before launching into ‘Lately’, a highlight from the wildly eclectic new record.  The wistful, twilight-tinged synth-pop melodies are met with instant cheers and enhanced by driving guitars before the band deliver hit after hit, playing ‘The Bay’, ‘Wedding Bells’, ‘Corinne’ and ‘Everything Goes My Way’ in quick succession and with sharp precision.

The setlist is a fun, career-spanning amalgam of tracks with the ‘Metronomy Forever’ songs blending in seamlessly.  ‘Whitsand Bay’ is understated and delicately languorous, enhanced by Anna Prior on backing vocals and its delectably slick and funky basslines. Meanwhile, ‘Insecurity’ drips with punky swagger when performed live, the sci-fi inspired ‘Walking in the Dark’ is moody and surreal, the incredibly funky ‘Sex Emoji’ channels Parade-era Prince and set highlight ‘Salted Caramel Ice Cream’ pulls a massive response from the crowd with its immediately recognisable off-beat synth and ingenious lyrics. The reaction each track gets is truly testament to the cult following Metronomy have accumulated over the years as the mixtape style of the album sits perfectly alongside their increasingly large arsenal of off-killer hits.

Metronomy have always been a band with a keen sense of identity and with all their sharp precision and undeniable musicianship, it’s their ability to conjure funk-laden fun and frivolity that makes their live show so special. Each member gets a moment to shine too – Anna Prior takes the lead during fan favourite ‘Everything Goes My Way’ while keyboardists Oscar Cash and Michael Lovett take over the stage for a kind of impromptu DJ set, moving their synths together to play ‘Boy Races’ and ‘Lying Low’. It’s like being transported to a French disco, getting everyone moving at the set’s halfway point.  Later, Joe Mount asks the audience to pretend they’ve been taken to the calm surroundings of the Scottish Highlands for one of their more understated tracks, they are instead greeted by a custom ‘Here we f****** go’ chant.

It’s no surprise that ‘The Look’ gets the biggest response of the night though – its iconic basslines and eighties inspired synths feel almost nostalgic for a generation of listeners, despite being released under a decade ago. A certified indie banger, it sets the crowd up for a euphoric rendition of ‘Love Letters’ and deliriously funky ‘Sex Emoji’

After calls for one more tune, the band emerge once more for a final encore which includes ‘Upset My Girlfriend’ and ‘Radio Ladio’, a big-hitter from their 2008 debut ‘Nights Out. It’s one last opportunity to dance, bringing a fun and varied set to a triumphant end.

Sounding every bit as fresh as they did when they first started out, Metronomy display all the cool precision and effortless charisma that has made them such a pillar of the UK indie scene over the last ten years. Long may they continue.