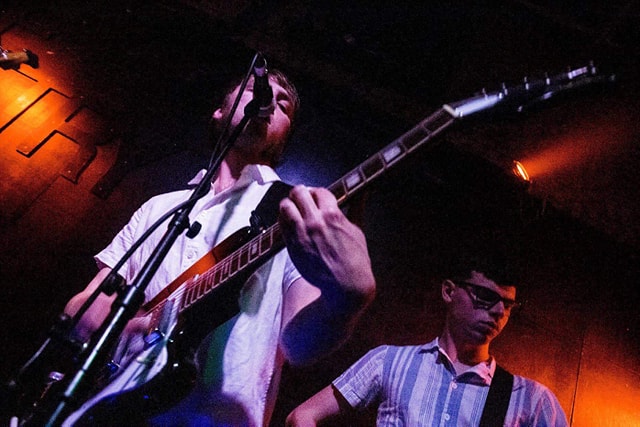 TIPPED by NME as one of their “Essential New Artists For 2019”, Pleasure Heads concluded a sold-out two-night run at SWG3’s Poetry Club on Sunday with support from Moonrunners and The Roly Mo.

Underneath a railway line in Glasgow’s former industrial pocket of Yorkhill on a dreich, late autumn evening is the perfect setting for a band like Pleasure Heads to draw a tour a close. A symbiosis of setting and sound, along with the incendiary environment created by punk music in an intimate space, helped not just to remind us of why Pleasure Heads are so admired in Glasgow, but also gave us a glimpse into the future of our local music scene. Night one saw support from Spyres and The Stoned Immaculate, and night two was opened by Moonrunners and The Roly Mo.

Moonrunners, who have supported the likes of Skeggs at St Lukes this year, demonstrated the awesome power that two well drilled, tight musicians can create. Their set married the surf-rock style of The Beach Boys with the blood (the guitarist did seem to have a considerable amount of blood on his fretboard) and snotters aggression of Fidlar. Next up were The Roly Mo, who have had an incredibly prolific and fruitful year thus far in terms of gigging and music released. With their first release Fooled By You covered by Tenement TV at the start of the year the band continue to defy expectations. Anyone lucky enough to have a ticket to see The Dunts at The Garage this December will see just what all the hype is about.

For the unacquainted, Pleasure Heads fit comfortably within the ranks of Scotland’s current punk scene but aren’t without their own idiosyncrasies that set them apart from the pack. One of which is the band’s aesthetic – black guitars and vintage clothing harks to a previous generation of British punk music that is more akin to Dr Feelgood than Sex Pistols, but with authenticity and never seeming contrived. Another is the songwriting prowess on show in their music and the lyrics sung by frontman Euan Purves; his timbre, delivery and presence carries a maturity and world weariness that could come from a man twice his age and experience. They opened with Down and Out, the second song from last year’s Excuse The Filth EP. Like much of their set, the song bemoans the mundanities of ordinary life in a provincial part of the country, which naturally resonated with a youthful and equally disillusioned crowd. The highlight, however, was their take on Sugababes Sound of the Underground, adding their own hazey, reverb driven guitars to a song that excited vastly different crowds some seventeen years ago. Like everything else from the band, it was saturated in their own distinct vibe and character on a weekend that they made their own.

Those who missed out on the chance to see them over the weekend, or anyone left wanting more, will be able to witness Pleasure Heads’ incredible live show at The Hug and Pint on the 1st of February as part of Independent Venue Week just announced this week. In a similarly intimate venue that will no doubt be at capacity, this isn’t one you want to miss. Tickets available here.