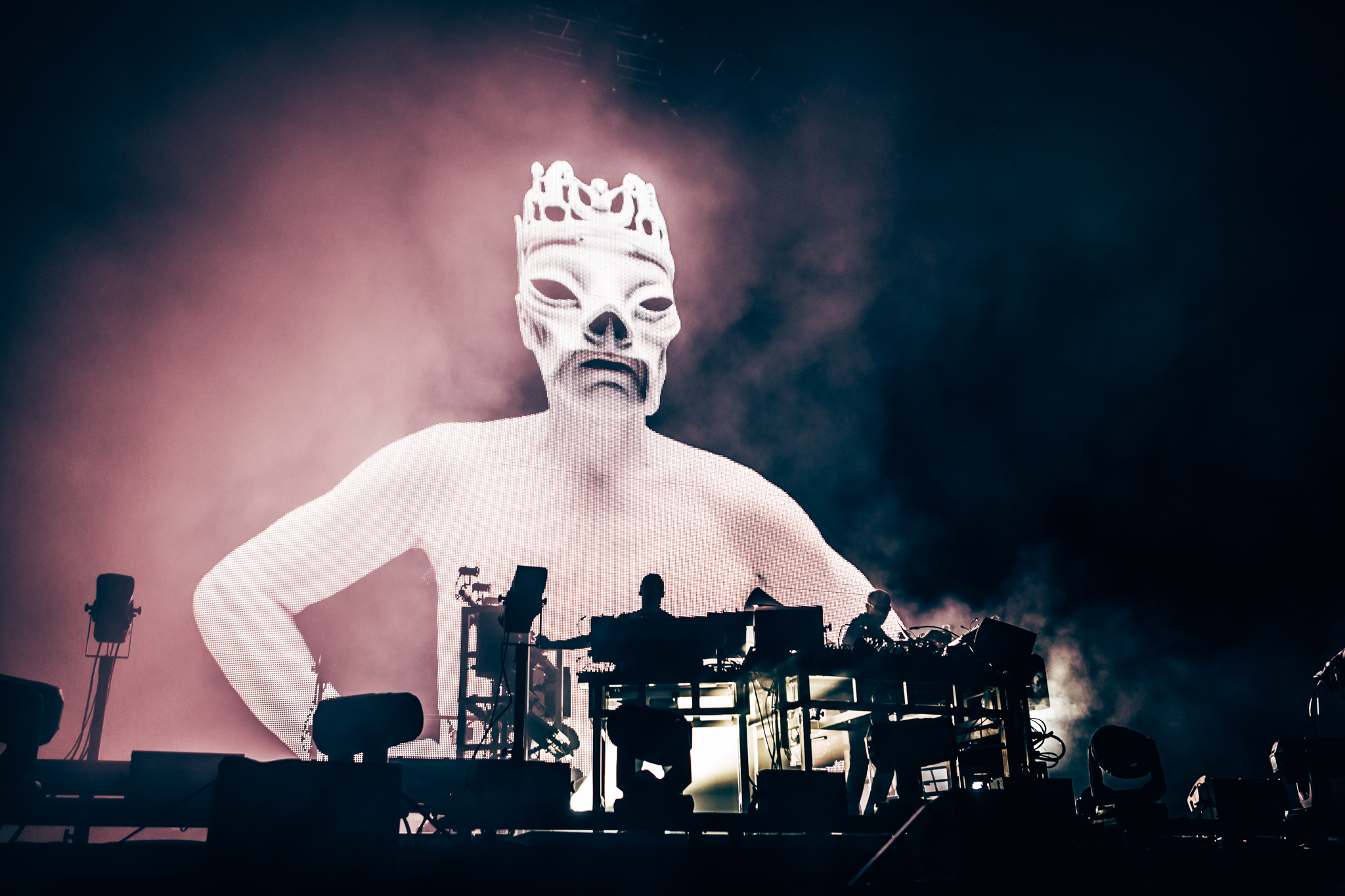 SCOTLAND’s Connect Festival made a triumphant return to the Royal Highland Centre in Ingliston this weekend with a truly eclectic bill of international stars and exciting new artists.

The festival, which originally took place in 2007 and 2008, has retained a special place in the heart of all those who were lucky to attend all those years ago. Held in Inverary, on the tranquil banks of Loch Fyne, the festival was initially billed as the more mature, boutique alternative to T in the Park, still very much in its heyday at the time, and it attracted a string of big international names and left-field artists, with generations of Scottish guitar pop rubbing shoulders with the likes of Bjork, The Beatie Boys, Pulp and more. It was then quietly shelved in 2009 and disappeared into the ether.

Of course, since then, Scotland’s festival scene has massively changed with small boutique festivals popping up all over the country, and the biggest names only really appearing at one-day events like Summer Sessions or the Big Top, or T in the Park’s inner-city successor TRNSMT – which also is designed to attract a much younger audience.

Connect, therefore, does appear to fill a gap in the market. It had boutique camping on offer for those who wanted to stay for the weekend, while it was easily accessible via public transport – thereby living up to organisers’ intention for it to be as green and sustainable as possible.

What’s more, it appears to have stuck to its original ethos – the line-up was very eclectic with a mix of international stars, homegrown heroes and exciting emerging artists, but there was also far more than just music on offer. The Speakeasy tent was well-attended throughout the weekend, hosting speakers, important conversations and comedians – keeping in line with Edinburgh Fringe season. Elsewhere the Rest and Be Thankful tent gave festival-goers a chance to chill out away from the hustle and bustle of the music stages with yoga and other activities, while there was also plenty of good food and drink on offer from local vendors. With all of this dotted around a very visually pleasing and manageable site, the festival felt like a chilled-out alternative to TRNSMT – despite a quiet Friday, the atmosphere felt instantly welcoming and more laid-back than many of its counterparts. 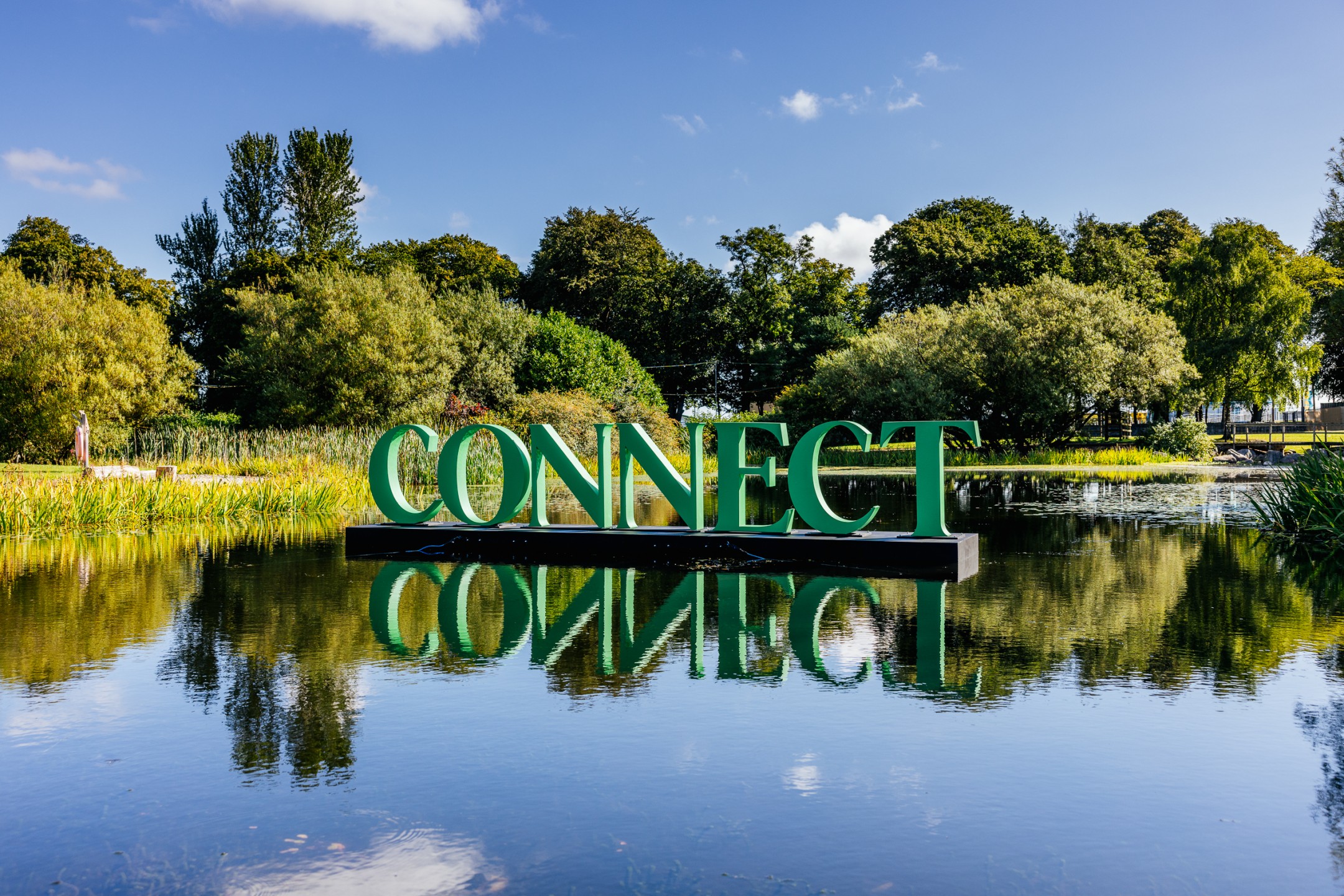 As for the music, the main Grand Parade stage showcased lots of heady electronica and brooding rock, the Guitars and Other Machines balanced the new with the nostalgic, while the compact Unknown Pleasures stage by the wooded glade near the entrance was for those after a weekend of clubbing. There were even a few names who appeared at the original festivals in 2007 and 2008 – including Mogwai, The Twilight Sad and Idlewild, representing Scottish indie at its finest.

With this in mind, the Tiny Changes Gardeners’s Cottage was a great touch. A small stage set up in partnership with mental health charity Tiny Changes, created in memory of Frightened Rabbit’s Scott Hutchison (who also happened to appear at Connect festival in 2007), the quaint garden spot hosted several acoustic sessions across the weekend, including previously announced artists like Joesef, Lizzie Reid, Admiral Fallow and Lewis McLaughlin and numerous secret ones that were teased throughout the day of their performances. Those who appeared included Cloth, Hamish Hawk, Ross Leighton of Fatherson and finally Sunday night headliners The National. Word had clearly rapidly spread by the time Matt Berninger, Aaron Dessner and Bryce Dessner appeared on the small stage on Sunday, with hundreds of fans trying to steal a view of the trio. Paying tribute to their late friend Hutchison, they performed tender versions of ‘Sorry’ and ‘About Today’ – telling the crowd, ‘whenever we play this one, we think of Scott’. It was a special, incredibly unique moment that held the whole crowd to reverent silence – and it felt like it couldn’t happen anywhere else. Even better was the news that the charity has raised £4,500 over the course of the weekend. 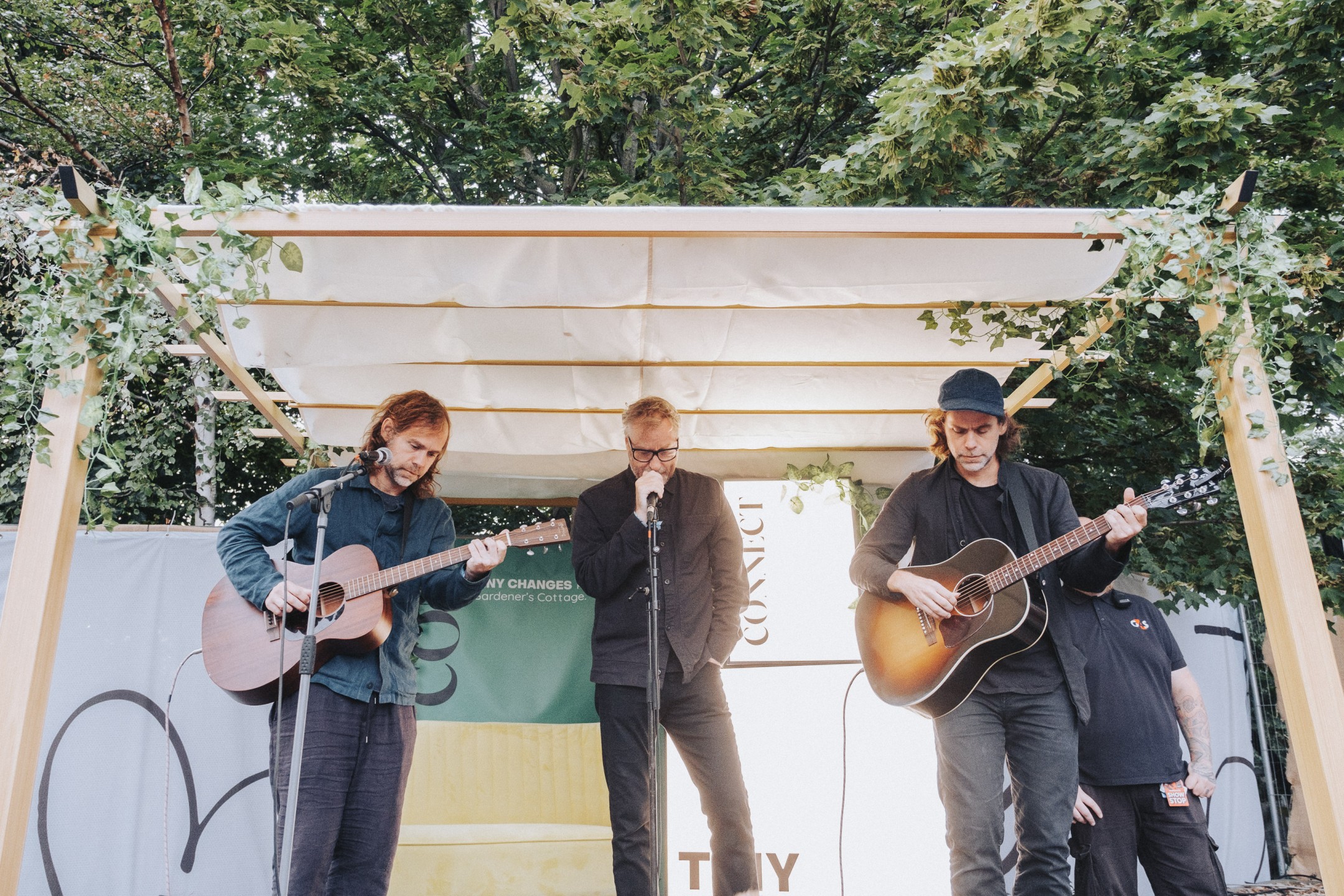 Other highlights of the weekend included Last Boy, aka Haydn Park-Patterson of The Ninth Wave’s new solo project, and Lizzie Reid. Later on, Holly Humberstone seemed genuinely delighted to perform in front of a respectful crowd on the Saturday – her rise has been nothing short of meteoric, and her afternoon slot show was a sure sign that all her groundwork has paid off. With a debut album surely not too far away, her endearing humility shone throughout – as did her knack for crafting big emotive pop bops.

Caribou instantly brought the feel-good vibes to the Grand Parade stage. Adept at crafting soft, warm tracks as he is punchier, big-beat numbers, Dan Snaith’s skill for building suspense and letting it drop is unquestionable – and he proved a big hit under the sun.

Bringing another shift in gear, The Twilight Sad were as epic as ever. With Grant Hutchison (Frightened Rabbit) now a firm fixture on drums, they barely took a moment to stop – pulling from four albums in their ten-song set, and delivering a deeply moving, lump-in-throat cover of ‘Keep Yourself Warm’.  Against searing, echo-laden guitars and brooding synths, James Graham was as captivating as ever – on this occasion, he twirled around the stage, punched the air and bellowed up to the sky, as if he could burst at any moment– unleashing all his torment and joy in 45 minutes of ultimate catharsis. This was by no means their biggest ever gig, but every moment felt vital and urgent – their wall of sound increasingly intense with each song. When you watch The Twilight Sad, it feels like everyone is on their side and this was no different – leaving physically and emotionally drained, they departed with heaps of gratitude. 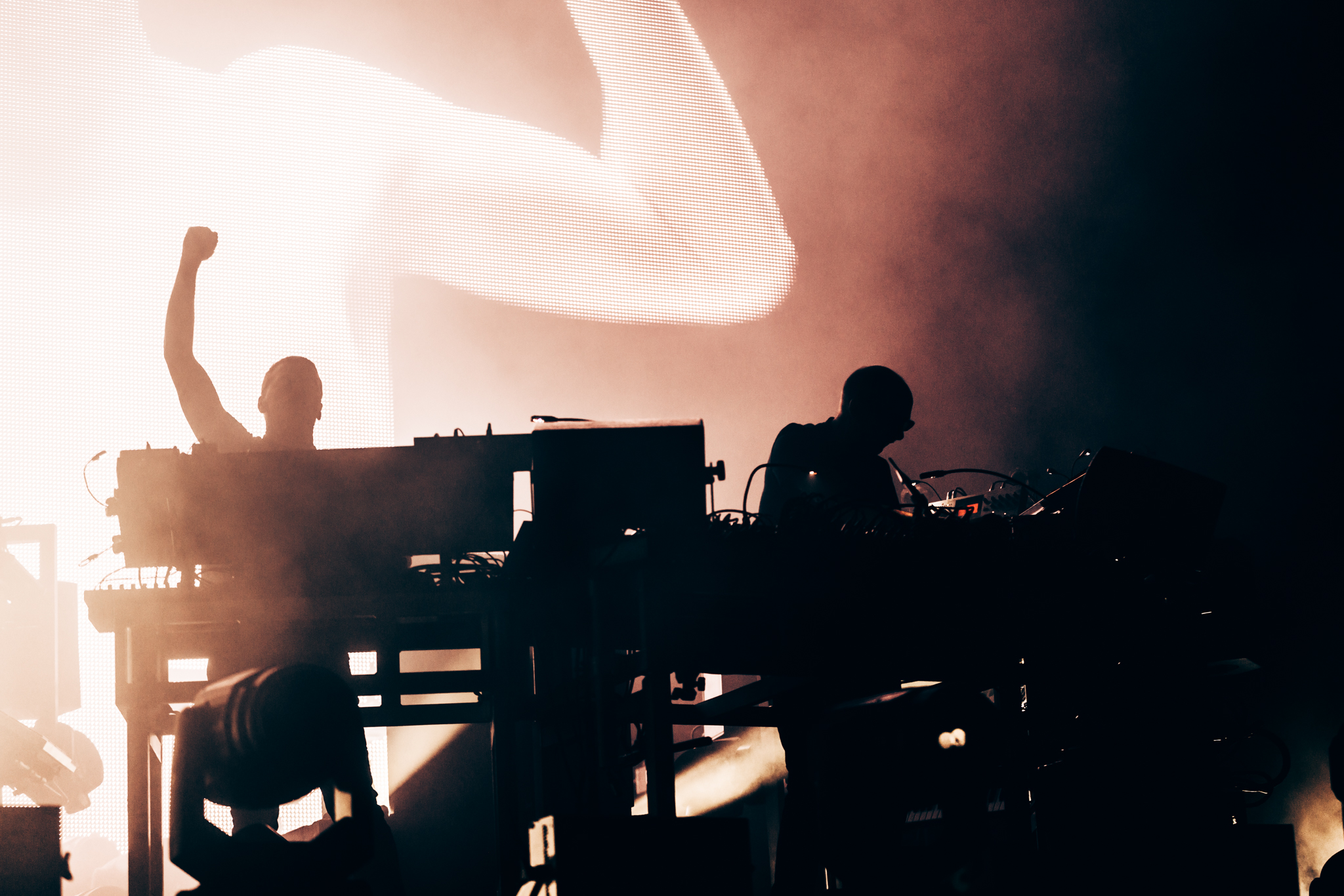 Later in the evening, Kathryn Joseph delivered a poignant and quietly defiant solo set with piano, while Erol Alkan kept the crowds dancing at Unknown Pleasures – proving why he’s considered one of the most influential figures in UK dance music. Over on the Guitars and Other Machines stage, Ride delivered a faithful rendition of their debut album ‘Nowhere – brimming with shoegaze perfection – even if they did struggle to draw a bigger crowd when The Chemical Brothers finally arrived.

Their headline set was a glorious sensory overload. Renowned for their fabulously surreal and spectacular live sets, the electronic duo showed just what could be achieved at this new site – filling the field with a barrage of strobes, laser lighting and unbelievable visuals. Absolutely electric from start to finish, it was a career-spanning setlist that played out like a flowing DJ set, pulling from their massive catalogue of perfect pop hooks and techno beats with ease. Their biggest songs ‘Hey Boy Hey Girl’, ‘Got To Keep On’ and ‘Do It Again’ all appeared, before an emotional climax of ‘Swoon’, followed by ‘Galvanize’. Invigorating all the senses, it made for a real visual spectacle.

A hard day to beat, but after navigating roadworks on the M8, our Sunday got started with an empowering display from Self Esteem. With her formidable troupe of backing singers and dancers, her flawless choreography was matched by her defiant punk spirit as she delivered big tune after tune. Still riding the wave of last year’s brilliant ‘Prioritise Pleasure’, it’s no surprise to see the Mercury-nominated artist take on the bigger stages now with ease.

Similarly, fellow Mercury nominee Little Simz was every inch the star on the Grand Parade stage as she treated a growing crowd to numerous gems from ‘GREY Area’ and ‘Sometime I Might Be Introvert’. Totally in command, her ability to witch fluidly between moods, flows and tempos was astonishing to witness, firing off bars and hooks with the utmost confidence. If Connect are looking for future headliners, she could very well be it. 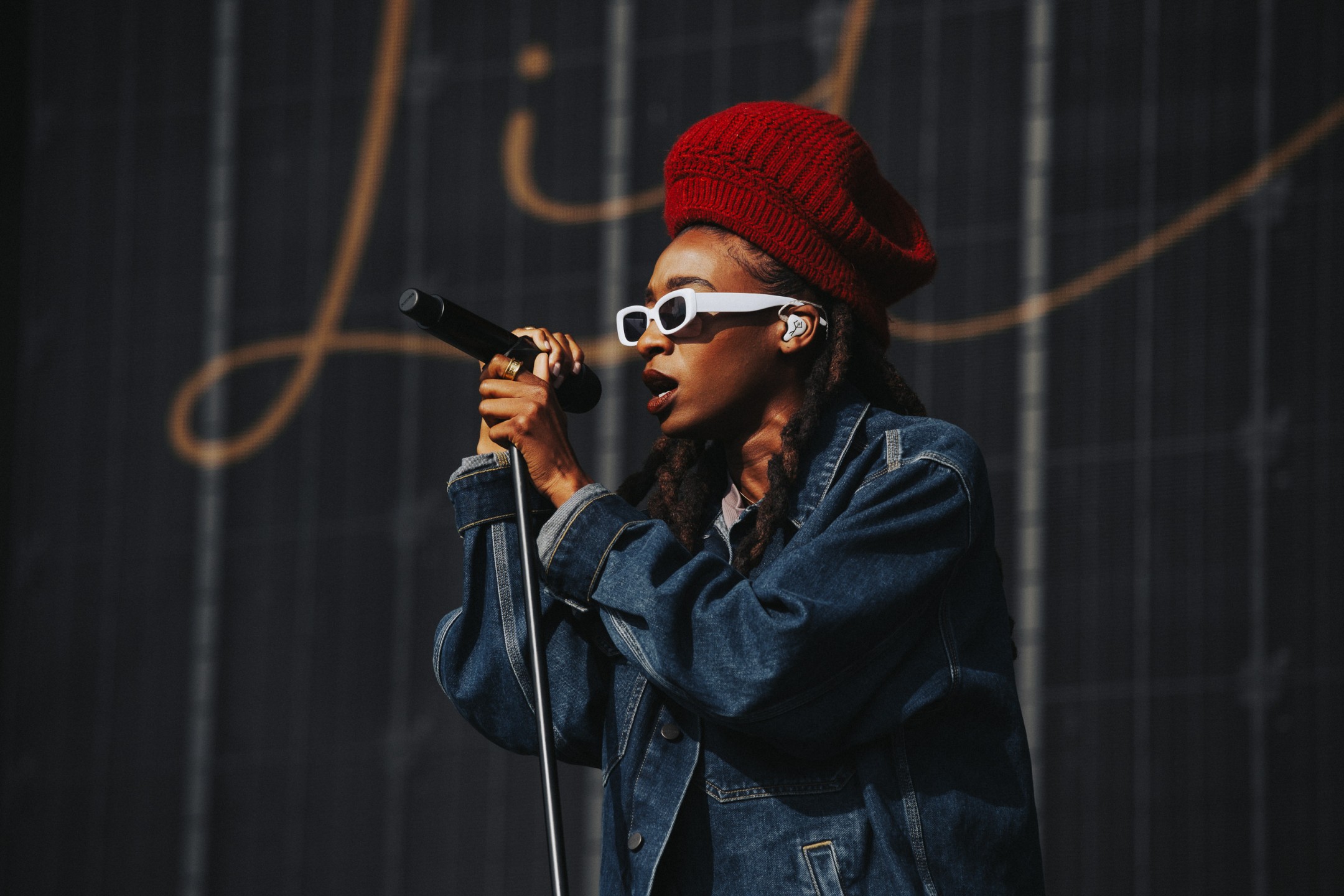 Bombay Bicycle Club battled with some sound issues, but kept the good vibes going under the sunny skies. Playing a cross-era setlist, they showcased their ever-evolving sound with massive tunes like ‘Overdone’ and ‘Feel’ appearing alongside golden oldies from their debut ‘Lamplight’ and ‘Evening/Morning’. With smiles all round, Jack Steadman looked genuinely grateful for their reception – they’re a band who hold a special place in many people’s hearts, and it showed. By the time they reached the frenetic ‘Carry Me’ and iconic, ‘Always Like This’, bodies were thrown on shoulders and dancing was in full swing.

As the sun went down, disco juggernauts Horse Meat Disco exerted their dancefloor nous to energise the crowd at the Unknown Pleasures stage, while Mogwai played a thunderous set against a stunning, apocalyptic sunset. The Scottish post-rock titans don’t want their audience to just hear the music, they have to feel it too – and their set was face-meltingly good. With all their stately and hypnotic power, ‘Ritchie Sacramento’ was perhaps the highlight – it was even more powerful live than on record, Stuart Braithwaite’s spine tingling vocal set against a barrage of feedback and fuzz.

After performing a secret set earlier in the evening, The National returned an hour later to do exactly what they do best on the Grand Parade stage. A band who have always inspired real devotion from their fans, they provoked mass singalongs from the dedicated crowd – showing that, eight albums in, they still make a clear, direct connection with those who love them. With that in mind, it was almost impossible not to get carried away with enjoyment as they delivered 18 songs in just under an hour and a half – some new friends, some touchstones to savour and plenty of treats for the casual fan. 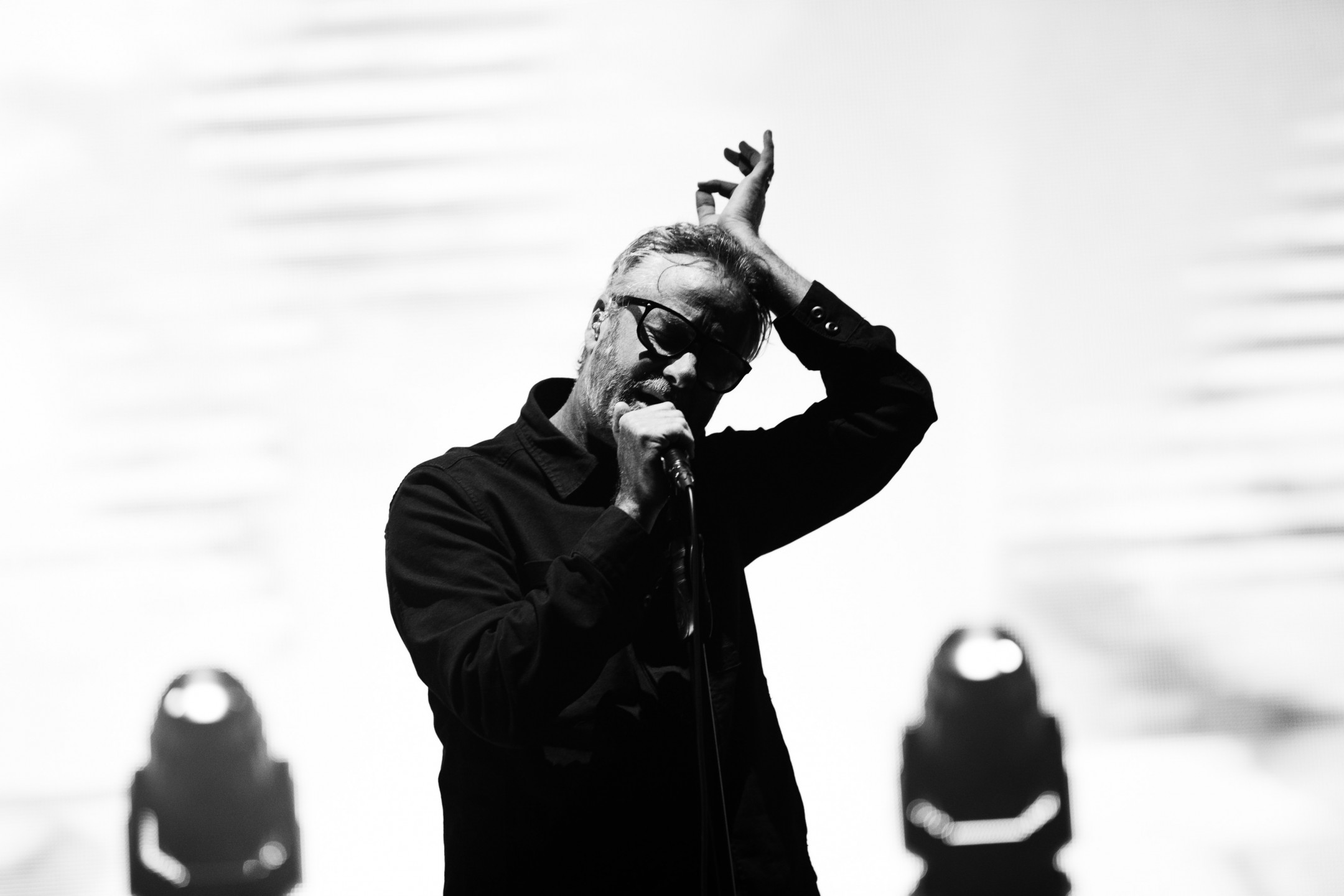 Ever the magnetic frontman, Matt Berninger’s vulnerable lyrics continue to belie his performance style – his fondness for running down into the crowd at the end of a very long microphone lead was indulged at length, sometimes even disappearing from sight altogether among a sea of bodies. For a group of supposed miserabilists, it’s their ability to build their sets with such dynamism that stands out – the set flies in, with plenty of lowering verses and soaring choruses there to seize the heart.

A thrilling ‘Bloodbuzz Ohio’ was performed early on, providing an early singalong. This, ‘The System Only Dreams…’ and the ‘Day I Die’ offered surging and cathartic anchor points, while the beautiful ‘I Need My Girl’ and ‘Light Years’ indulged the sentimental, allowing Berninger’s baritone to shine. Elsewhere, their usual guitar, bass, piano and drums set-up was elevated by trumpet and trombone – adding a more emphatic kind of euphoria to their songs.

There was also room for a couple of new tracks from their upcoming ninth album – and not the kind that send folk to the bar. ‘Weird Goodbyes’ received the best response and was greeted like an old friend, while ‘Tropic Morning News’ was direct, driven by buzzing guitars and pummelling rhythms.

Experts at what they do, The National have well and truly cemented their status as main event headliners. And as for Connect, all that’s missing is a bigger crowd. Already confirmed to return next year – we predict it may become a regular fixture on Scotland’s festival calendar.