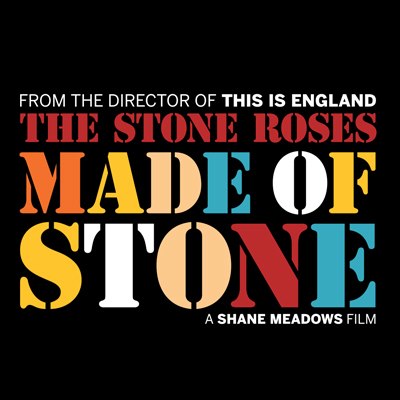 IN ONE slow motion unbroken shot, Made of Stone opens with a cinematic approach to Ian Brown, The Stone Roses classic bass line and the fans reaction to a generation’s hero. Recorded at Heaton Park, the opening scene shows fans besides themselves and Brown in unemotional-frontman-mode as he takes one fan’s phone, records himself and then the crowd. Its nothing short of mesmerising.

The Stone Roses defined a generation, cultivated a hairstyle and broke a million hearts into pieces when they announced their split in 1996- way before anybody was ready to see them go. Last year the band announced they were to resurrect in the format of Brown, Squire, Mani and Reni. Queue Shane Medows, the gifted British director and self-confessed mega-Roses fan.

High on acid on the eve of The Roses Spike Island gig, Shane Meadows found himself scared in a river with goths, cuddling. The acid talked him into giving his ticket for the Spike Island gig away, or he would get stabbed at the event no doubt. A regret that stayed with him for two decades wonderfully washed away one day in 2012 when Meadows was in a taxi and Ian Brown pops up on his screen. The Roses were back, and his hero wanted him to capture it all.

Meadows gets to see the band jam for the first time in rehearsal for the world tour, and its a scene that I am glad made the cut. Meadows makes his way to the top-secret location with his producer Mark Herbert. The captivating shot, in black and white, show Meadows and Herbert stop at a chalk board with a scribbled and heavily edited set list for the shows. The camera cuts to the set list, and then to the two grown-men’s faces as they divulge the classic anthems that mean so much to them as fans. Their faces are a picture and words fail them, showing true schoolboy excitement in a grownup world. This perfectly captures just what this reunion means to people. In black and white, or in full colour- emotion shines through.

And its the distinctively-chosen change between colour and monochrome that grab me throughout the 97 minute film. Some moments don’t need to be in neon shades- Roses lemon yellow will do.

Liam Gallagher tweeted, “not been this happy since my kids were born” on the day the band announced their reunion last year, but for me, its the Warrington fans perfectly-orchestrated speeches in the film. On the day the radio announces a free gig in their city, Meadows captures the mayhem. At 4pm the news breaks, the first 1,000 down to Parr Hall with official merchandise, album sleeve or a ticket to the Heaton Park gig will be given a wristband to the gig that evening. The film captures them running, shouting on mobiles, mums dropping off memorabilia to 40-year-old men. People leave their work and admit to literally running from their desk without a nod from the boss. The Stone Roses fans amongst the audience smile in appreciation of how the prospect of a gig like that would make you do whatever it takes.

And things may never come good for Roses fans again as nothing lasts forever, but that album and this film sure will.

BONOBO AT THE PICTURE HOUSE