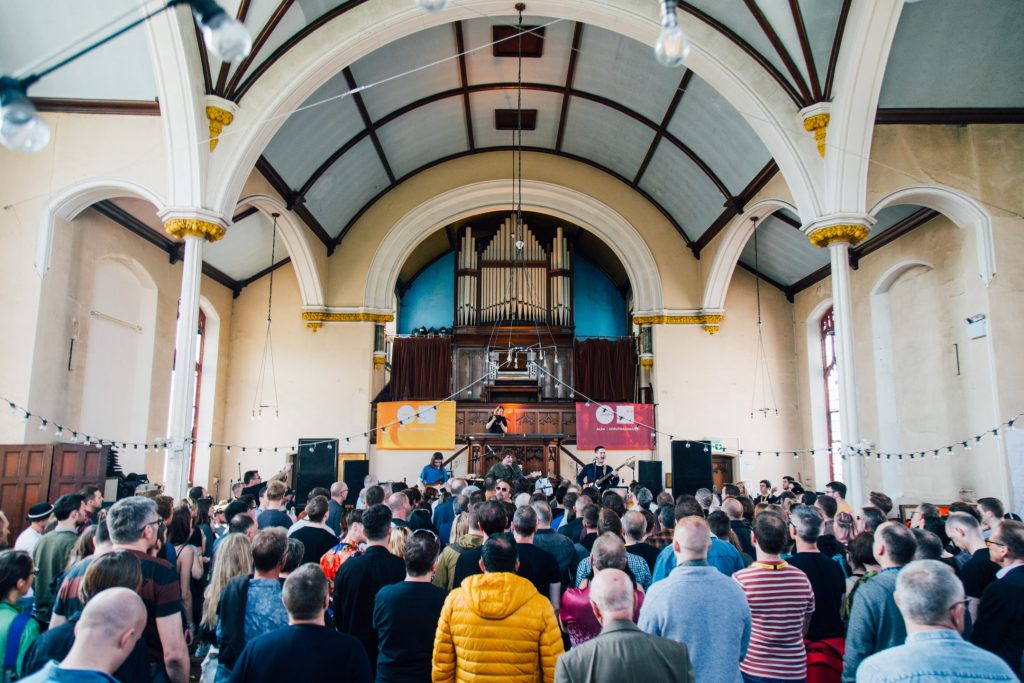 CREATIVE Scotland once again travelled south to Brighton to The Great Escape Festival, taking over One Church, for Showcasing Scotland 2019. With 10 acts over 2 packed days, the wealth of Scottish talent at this year’s festival could not be underplayed.

Showcasing Scotland 2019 kicked off in intense fashion with one the most anticipated sets of the showcase. Only their second show, Glasgow’s VLURE played a menacing midday set with their dark and twisted sound. Dressed in black and drenched in 80s-influence, VLURE’s set was striking and literally in the faces of the audience. With elements of 80’s synth mixed with a smattering of goth, their sound is orchestral and alternative, a combination that is hard to marry. With the band yet to release any recorded material, VLURE’s set provided an insight into one of Scotland’s most exciting new bands. The diversity on display at Showcasing Scotland 2019 was perfectly seen on Thursday afternoon. From a loud and anthemic start from VLURE, next was singer-songwriter Aaron Smith. Currently working with the management behind Lewis Capaldi, Aaron Smith’s minimalist sound sat perfectly within the stunning, bright setting of One Church. Shying away from releasing music online, Aaron Smith is yet to release any recorded music, fueling the curiosity of fans who were queued outside of One Church for the doors opening for Thursday’s show. To say his set ignited interest from the crowd would be an understatement, catching the ears of music industry delegated and fans alike. 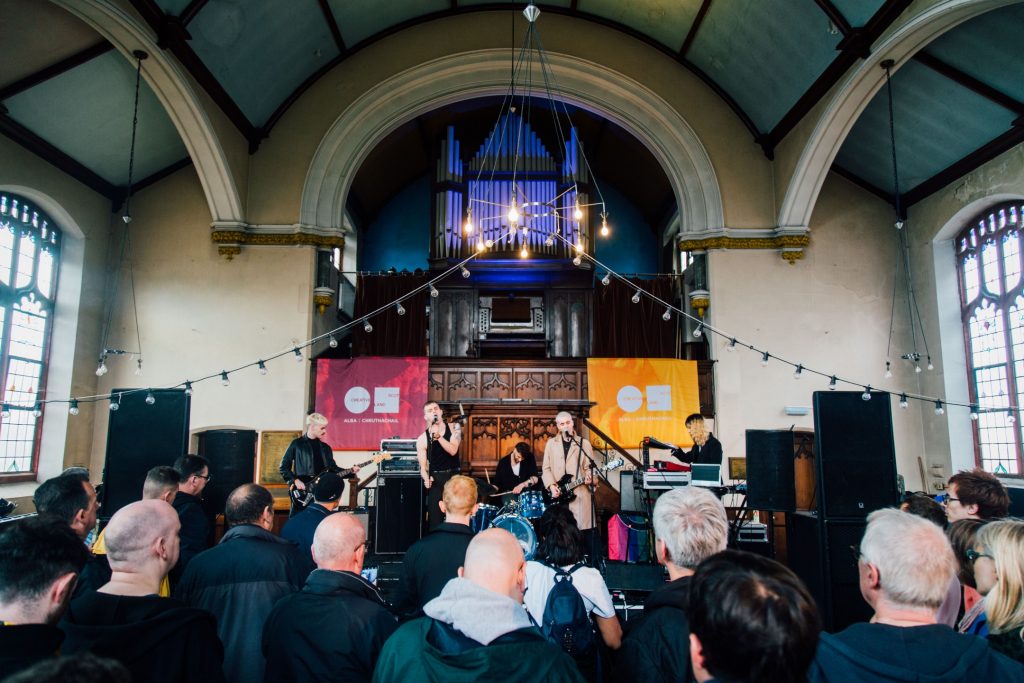 Glasgow-based three-piece, Cloth, kept the minimalist sound of the afternoon rolling with their alternative sound. Again, a sound that felt at home in such a bright, unique venue, Cloth treated the audience of music fans and industry professionals to half an hour of soothing indie music. Their live show uses impressive instrumentation to pick apart sometimes conflicting elements of pounding percussion, intricate guitars and dreamy vocals to build a sound that weaves together throughout their set. Walt Disco, one of the busiest bands at this year’s festival, played their first of four shows at The Great Escape 2019 on Thursday afternoon. One of the most talked-about bands in Scotland just now, the ever-exciting and unpredictable live show of Walt Disco is one to be admired. Their eccentricities and ferociousness blends the pop sensibilities they sing about with an attitude that is purely punk, culminating in the sweaty, drenched ending of ‘Drowning in Your Velvet Bed’. The band’s performance at Showcasing Scotland 2019 was testament to their incredibly busy roster of live shows, with this band getting better and better with every show. 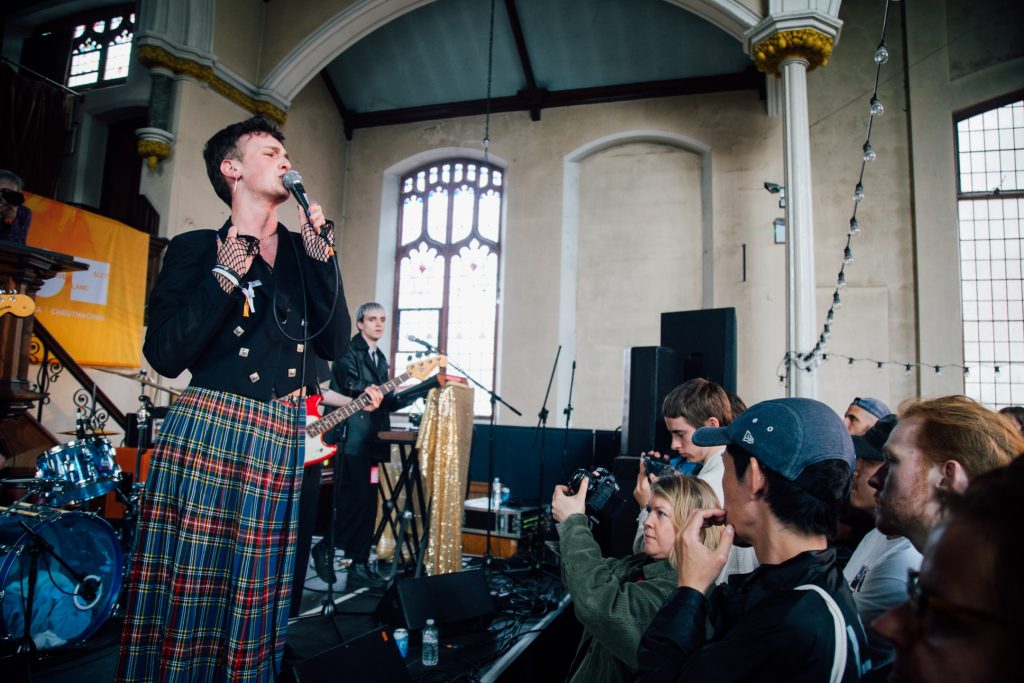 Day one was brought to a rousing and rallying end with punk four-piece Heavy Rapids. There is perhaps no scene in the UK thriving in the manner that punk is in Scotland, this being so Creative Scotland rounded of Thursday with an incredible set from one of Scotland’s punk frontrunners. With music that is exciting, raucous bordering upon riotous, Heavy Rapids provided a rallying cry at 100mph for the enthralled audience that packed out Brighton’s One Church for the close of day one. 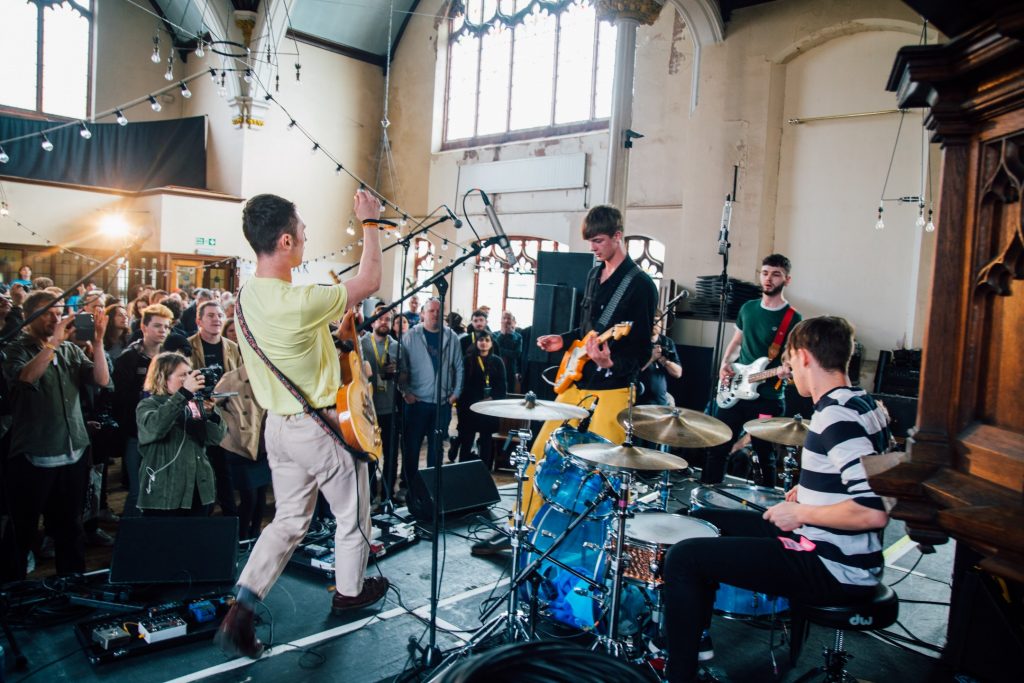 Day two of Showcasing Scotland at The Great Escape kicked off with an incredible opening set from Inverness based singer-songwriter Tamzene. One thing that hit home about her performance was the energy and passion that underpins every not she sang, filling the room with an incredibly soulful sound that captivated the entire audience. Her sound has certainly graduated from that of her busker beginnings and packing out One Church for a midday show is testament to the buzz that surrounds this artist. Fresh from their performance on the TTV Discover Tour last month, Aberdeenshire’s OK Button followed up Tamzene with another enthralling performance. One of the most talked about bands in Scotland right now, this three-piece have risen to acclaim due to the immersive nature of their live shows, and this was no exception. A performance that engaged the crowd, as sun shone through the windows, with the venue glistening, the setting and sound blended together perfectly, which heightened the mesmerising nature of this set. 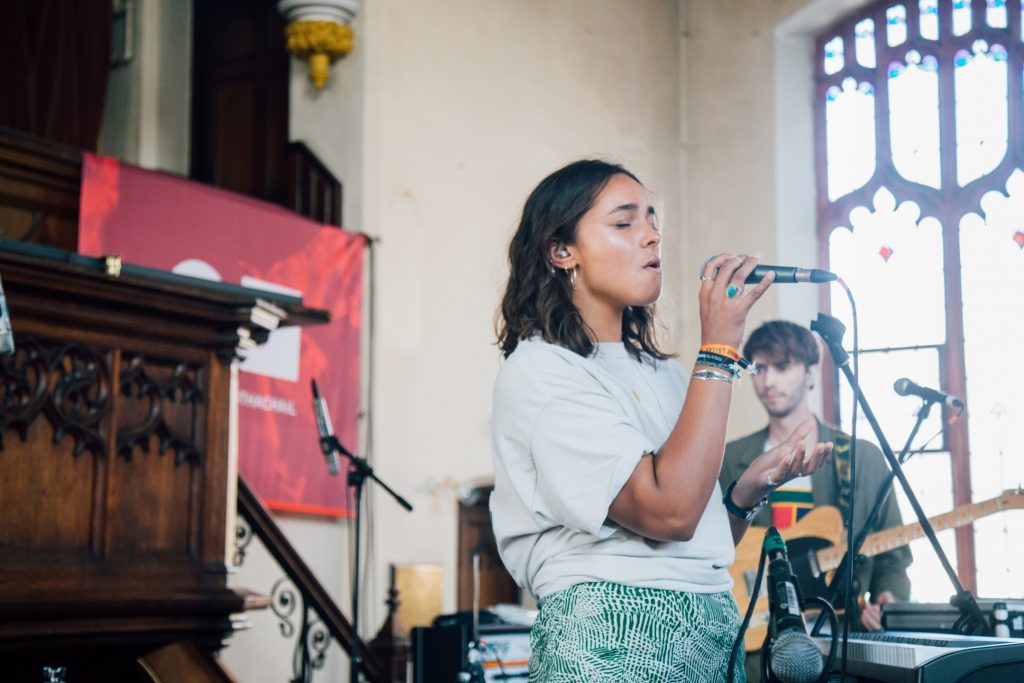 Following a successful trip to the USA, Glasgow’s Lucia brought their bubblegum-flavoured indie-punk to Showcasing Scotland. Tipped as one of the country’s best emerging musical outports, Lucia’s diverse sound and striking live show drifts from the fuzzed-out pop sound of tunes like ‘Summertime’ through to rock n roll and everything in-between. One thing that never fails to amaze audiences about Lucia’s sets, is the intensity and charisma with they perform. The in-your-face and enthralling sound of ‘Melted Ice Cream’ provided and emphatic crescendo to a striking set that had One Church worshiping. With support slots for some of the biggest names in the genre, including Kanye West, hip-hop artist Kobi Onyame brought his African-influenced industrial sound to the breezy setting of One Church. His powerful sound prompted the entire audience to move with his soulful hip-hop sound, from harmonising with the audience to charging through complex verses, Kobi’s set was an undeniable highlight. One of the most experienced artists on this year’s Showcasing Scotland bill, Kobi Onyame’s set was testament to his time in the scene. 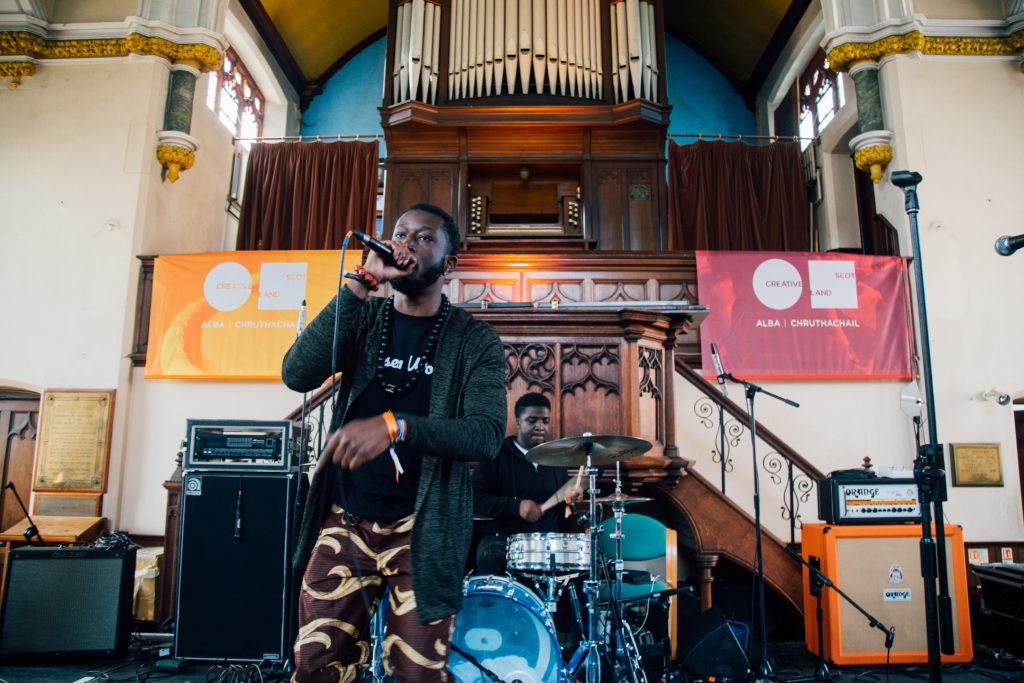 One band who seemingly show zero sign of slowing down are The Snuts. The West Lothian indie-rock four-piece have made the leap from basement bars to festival main stages over the last 18 months. Their unstoppable rise was personified by the army of fans queued around the corner of One Church as the venue packed out ahead of their set. With the room full, the band launched into a set of indie brilliance. The Snuts have released a number of singles, but no track enthralled the Great Escape audience quite like ‘Glasgow’, going from soft to striking, the tune’s huge chorus is perfect for a live setting. With a packed venue and a rousing set from one of Scotland’s most exciting bands, there was no better way to close Creative Scotland’s Showcasing Scotland 2019 at The Great Escape. 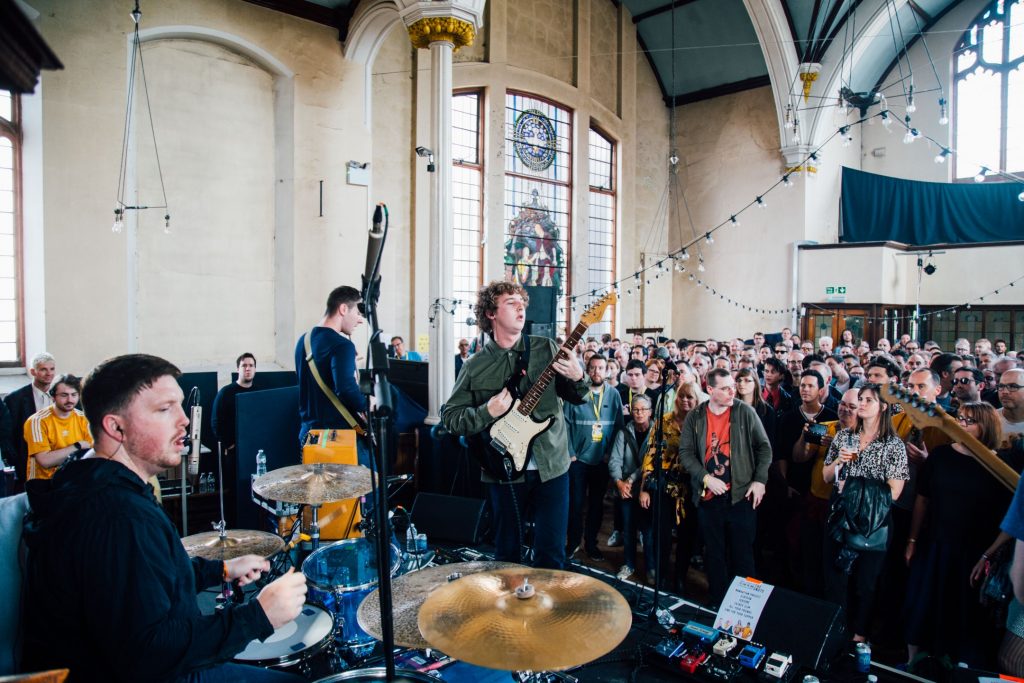 Find out more about the work of Creative Scotland here.

The Blinders bring their psych-punk to Glasgow