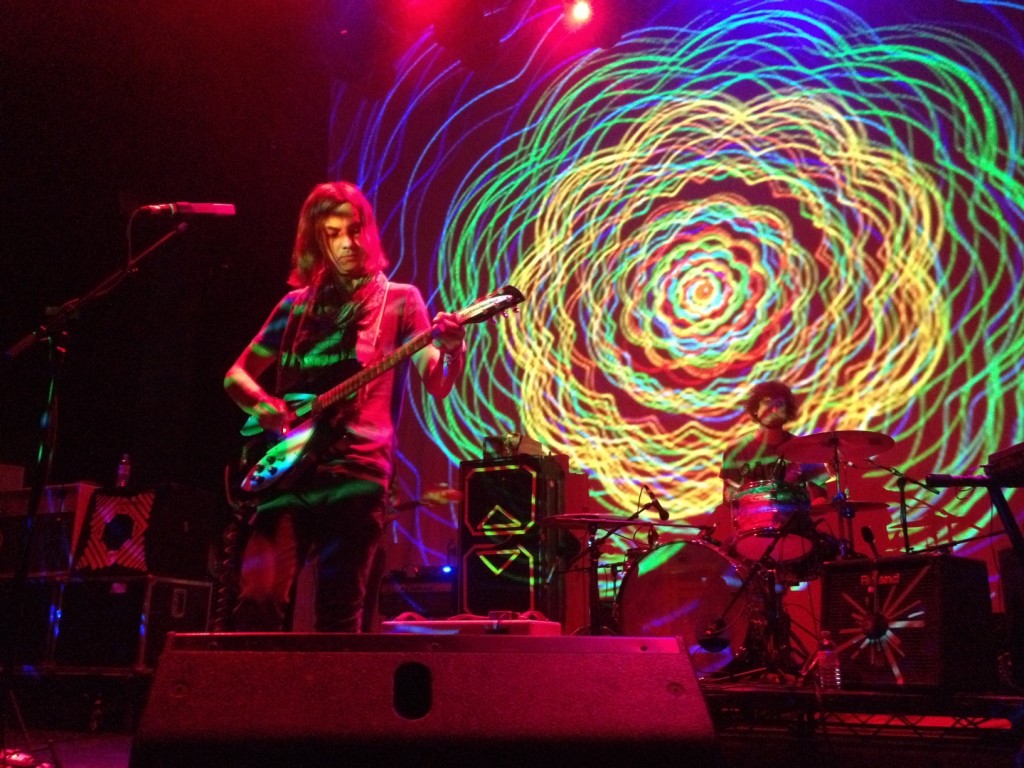 IT was an emotionally-charged evening of bright lights and psychedelic moments as Tame Impala took to the stage in Edinburgh’s vast Picture House venue. Though space wasn’t a concern for the band as they packed out the venue like true champs, fans sprawling onto the sides and platforms to catch the anticipated show.

It wasn’t only Tame Impala that made this the gig to be at this evening; the hotly-tipped Temples were up first in their support slot for Parker and co. Temples, signed to label-of-the-moment Heavenly Records, have stormed the live circuit this summer, impressing at festival slots up-and-down the country. So much so, the guys have bagged themselves a headlining tour this October where the band will play venues such as Glasgow’s King Tuts and Edinburgh’s Electric Circus. Temples Shelter Song led the way for Tame Impala’s appearance, nice and early at 20:30.

Why Won’t You Make Up Your Mind from 2010’s Innerspeaker opened their set, receiving a great reception from the crowd. But the crowds reaction had more to do with the transfixing backdrop, alighting the room into a virtual kaleidoscope of colour and movement. As shapes and fluorescent shades brought the music to life, the crowds excitement built and built in a way that made the atmosphere in the venue build to the point of explosion.

A track from 2012’s Lonerism followed in the shape of Endors Toi- a polite song edging into the set with a little drumming and extensive reverberation. And it was the drums that bring this song to life midway, jumping onto the break in the vocals like a kid to an unsecured ice cream truck. As quickly as this song builds, it disappears again; a really special track-effortlessly understated.


A few tracks from the 2010 album Innerspeaker made it onto the set list, proceeding track Solitude is Bliss being one which is well-received.

Keep on Lying from Lonerism was the critics favourite upon its release on the album last year. With many admitting Parker had done what many musicians had failed to do so miserably before him- make an album so reminiscent of The Beatles Revolver that its achingly good. And as Parkers voice echoes throughout the hollow room, the crowd watch on in awe of this moment.

Music to Walk Home By, does pop melody in its purest form- taking you on a sound-trip as the track pulls you back and forth through noise coming from the collection of instruments constructed on the stage. Five-strong, Tame Impala are blowing away the crowd and we’re only 20 minutes in.

Half Full Glass Of Wine from the 2008 self-titled EP, starts fast with an infectious three-bar repetitive riff. It’s the kind of riff that sends you into a blues-toe-tapping daze. The song breaks down, pulling you in and out of its crazy beat. The drum solo towards the end of the track saw the crowd merge into a sea of hand-clapping enthusiasts. And hand clapping was about as mental as it got with this crowd, as they chose to appreciate the tracks and performance modestly throughout the gig.


Next up was the outstanding, earth-shattering sound of Elephant’s base and drum combo- this song really needs no introduction. Not only a stand-out track for the band, but a top track of 2013 as it made its way onto dance floors around the world. The band work this track into a perfect performance, boasting passion and an incredible hook that make this band tremendous to watch live, at worst.

As the gig draws to a close, Feels Like We Only Go Backwards brings the tone of the evening down to a bitter sweet melancholy; and who else would you want to play the soundtrack of sadness?

Apocalypse Dreams from the Lonerism LP brings the gig to the encore. This track has the hit-making credentials of Elephant and is greatly received by the crowd. As the band make their way off stage, the crowd seem happy with the dosage of Tame Impala this evening, almost as if the encore isn’t required. And as the band come back on to play It Is Not Meant to Be and Nothing that Has Happened So Far Has Been Anything We Could Control, its somewhat of an anticlimax. That said, nothing can take away from the epic performance the band has put on tonight.

The venue and the visual backdrop only adding to the atmosphere of their set- keeping the crowd in suspense with their synth-orientated tunes that, live, sound exactly like their CD.