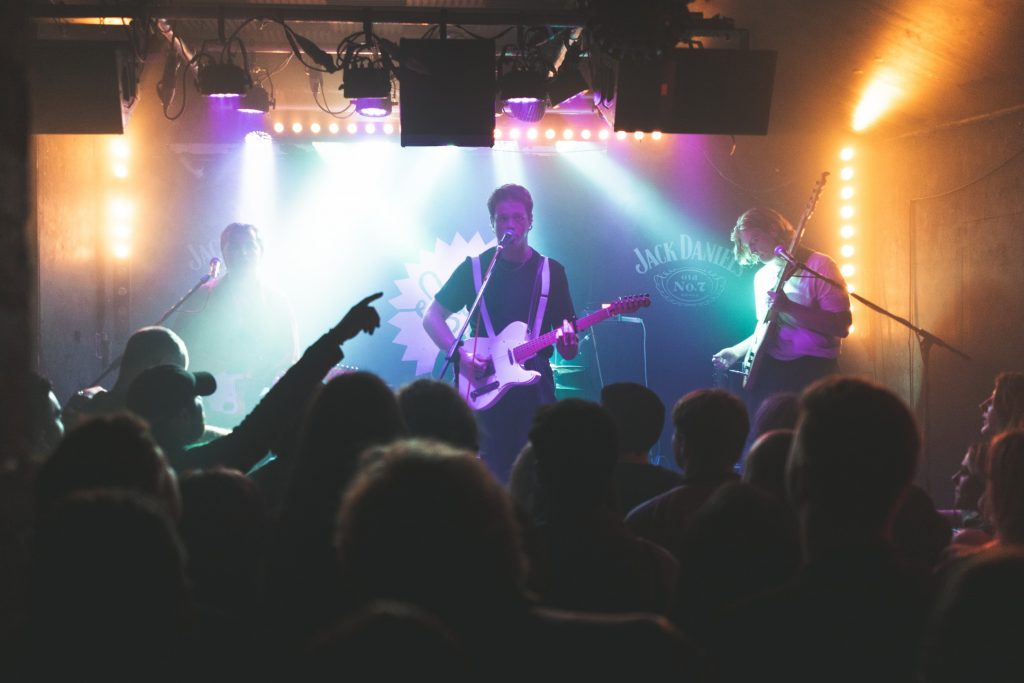 Most of us will have endured a grumbling, unproductive malaise over the last 18 months. The unshakable feeling that the world may be standing still and that we’re perhaps a little too comfortable with it.

As many forged monotonous pandemic routines and habits, Ryan Hunter, frontman and primary songwriter in Fabric Bear, didn’t allow his creative output to falter. Before March was out Fabric Bear had already released “Rona, Why Did You Cancel The Party?”, and a couple of days later dropped the anthemic fans’ favourite “One Last Time”.

Another ten months would pass before Fabric Bear’s next release, “All I Want”, in February 2021. Despite already showing quite a stark divergence from their earlier sound, “All I Want” was the tip of the iceberg for what was to come.

That transformation was revealed to the public on Saturday at Sneaky Pete’s, as Fabric Bear became The Big Day. But what brought about this change?

The pandemic tested the mettle of almost every artist who worked in a collaborative environment, and that was very much the case for Hunter and his bandmates. However, rather than merely tweak the dynamics of the creative relationships in the band, the pandemic ended up having a substantial effect on their genre as a result of a forced change in habits.

“[…]not having the luxury of being in a practice room with other people, and recently having learned more about home-recording and operating music software etc, i decided to really experiment with my songwriting, completely disregarding thoughts like ‘this song must sound good with only 2 guitars, bass, drums and vocals’. I’d make some really wild arrangements and not put a roof on anything creatively, whereas beforehand I think I did subconsciously.”

It’s clear that for Ryan and his bandmates the decision to start afresh, despite already having a band with a platform that was very much in ascendancy, is going to be a worthwhile move for the long term future of this new band. But where does that leave fans of Fabric Bear?

The challenge now, one would imagine, is getting fans of Fabric Bear to buy into this radical new direction, and that is a battle that is won in the live music arena.

On Saturday the 9th of October at 9pm, Fabric Bear walked onstage. By 9.45, a capacity Sneaky Pete’s crowd beheld The Big Day, and it’s hard to believe that they failed to convert a single person in attendance.

They opened with the brand new track, “Fashion Statement” – a song that reflects this new epoch perfectly. Big, bold and funky. Not to mention downright cool.

Fans were treated to songs that were released under Fabric Bear such as “One Last Time” and “Rona, Why Did You Cancel The Party” before the announcement was made early on that Fabric Bear was no more, and that we were now bearing witness to The Big Day.

How and where can The Big Day win over any remaining sceptics from further afield however? Hunter had this to say:

“Release wise – we have A LOT of music recorded and ready to go. However, we’ve no current plans on releasing music until the time is right. We’ve only just played our first show- so I’d love to just gig gig gig as much as possible until then!”

We’re led to believe that among those gigs, gigs and more gigs there will be shows in Glasgow in the near future. As to which songs we’ll be able to hear first, however, we’ll just have to sit tight and see what The Big Day has in store for us.