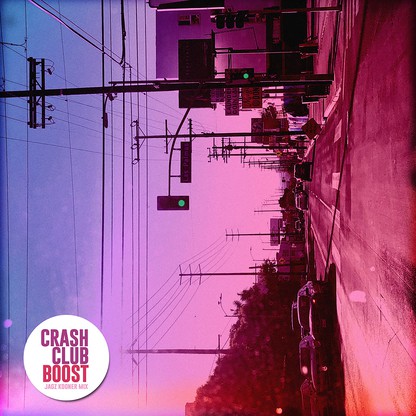 RENOWNED for conjuring up euphoria from a simple set-up of bass, guitar, drums and a hail of synth-based mastery, Crash Club’s output has always aligned dance music’s more heady inclinations with an unflinching air of  menace that recalls the substance-induced powder keg that is the dying embers of a night out. Eternally forthcoming with their admiration of Primal Scream’s abrasive and disruptive XTRMNTR era, the news that the group had coalesced with none other than Jagz Kooner; the man behind the album’s legendary high watermark ‘Swastika Eyes’ alongside working with and remixing tracks for The Whip, Massive Attack, Kasabian and Oasis to name a scant few, made perfect sense and has paid off in dividends on their new track ‘Boost.’

An emphatic return after a lengthy hiatus, the group’s new track sees them retool the core elements which have forged their reputation as an enthralling band both in-studio and in the live arena whilst making some valiant leaps forward. For one, the group have opted to forego the guest vocalist trope that had been such a staple of their output and opted to allow the deft intermingling of its transfixing electronics, imposing basslines and brooding bedrock of guitar to come into the foreground. By doing so, the group have forfeited the possibility of the usual impassioned singalongs in order to allow a clearer pathway through which the listener can enter a realm of elevated transcendence and this layered composition certainly delivers on that front.

Firmly re-positioning themselves among the fray after a period of self-imposed exile, expect more from these bastions of electronica in the not too distant future.

Check out the track below now: