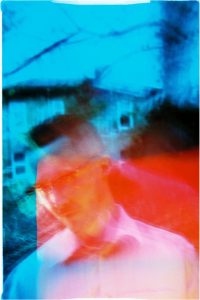 YOU may recognise him as a member of Scottish dark wave rockers The Ninth Wave, but Calum Stewart is ready to forge his own path with new project Health and Beauty.

A chance to explore his love of dance music alongside his appreciation for all things indie, the multi-instrumentalist has shared his debut single – and it’s a beautiful thing called ‘In Disarray’.

Brimming with emotion without ever becoming steeped in melancholy, the track sees his powerful falsetto delivered against a throbbing, highly charged backdrop. And it transcends musical boundaries, too. With Calum in charge of every element, the worlds of 90s indie and techno collide in a stunning wave of sound – channelling the likes of New Order, My Bloody Valentine, Aphex Twin and Detroit techno, it’s a song driven by emotion and introspection,

Building and building to its emotive crescendo, there’s no denying Calum is able to touch the listener on celebral level as much as lure them to the dancefloor – a quality that can be so hard to capture, yet he masterfully achieves it on this occasion.

He shares “Lyrically, this track looks to distill into as few words as possible the feeling of your brain being ‘out of sorts’ without any discernible reason. These kinds of thoughts and feelings can be fleeting – there one minute and gone the next. There’s rarely a moment of clear catharsis. So there’s no catharsis in the lyrical content. It’s one sentence repeated over and over. I felt it didn’t need padding with any other words. The sentence exists on its own and its repetition is like the repetition of the feeling itself.

However, for me, the song is far from gloomy. The music itself takes a lighter approach and is really joyful in many ways. It celebrates catharsis through music, but tinged with a wee bit of melancholy. I really enjoy songs like Robyn’s ‘Dancing On My Own’ for that reason – it allows space to dance but also space to have a wee cry. Same rules apply here.”

With a larger project said to be on the way, there’s also a live show with Last Boy (aka fellow Ninth Wave member Haydn Park-Patterson) at the Poetry Club on 24th February 2023.

Check out ‘In Disarray’ below.

Starksy-Rae 'Who Drank My Cans?'