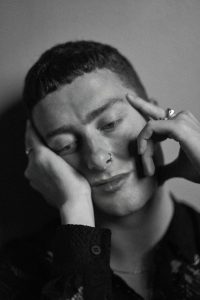 JOESEF has shared a stunning new single ‘Just Come Home With Me Tonight’, lifted from his highly anticipated debut album Permanent Damage, set for release on 13th January 2023 on AWAL.

Much like the songs that came before it,  ‘Joe’ and ‘It’s Been A Little Heavy Lately’, the new track captures the essence of the upcoming album – it’s heart-wrenchingly honest lyrics, its stark yet soulful storytelling and stunning production.

Featuring the demo vocals first recorded in his bedroom in Glasgow before he started work on his debut with Barney Lister, the track retains the true, raw feeling of heartbreak – his soul-bearing lyrics delivered against a meditative yet atmospheric backdrop.

He says “I wrote this song before I even knew I was going to make an album. I’ve kept it quite close until now and it’s definitely one of my favourite songs I’ve made. It’s about meeting my ex at a party and realising they’d moved on.  The change between us was so palpable and that little light in his eyes that he carried for me wasn’t there anymore. The song uses the demo vocal take I recorded in my bedroom in Glasgow. We tried recreating it but there’s sometimes an inimitable magic within a demo that can’t be touched. It’s strange hearing my voice back in this way, not being in that headspace anymore. I wish I could tell that version of myself that I’ll be alright soon.”

The track arrives with another cinematic visual, courtesy of Luis Hindman. Check it out below.

Now amassing millions of streams, Joesef heads out on his biggest headline UK and European tour to date next year. It will feature a date at London’s Roundhouse and a double-header at Glasgow’s Barrowlands.

The Dunts 'All That You've Waited For'