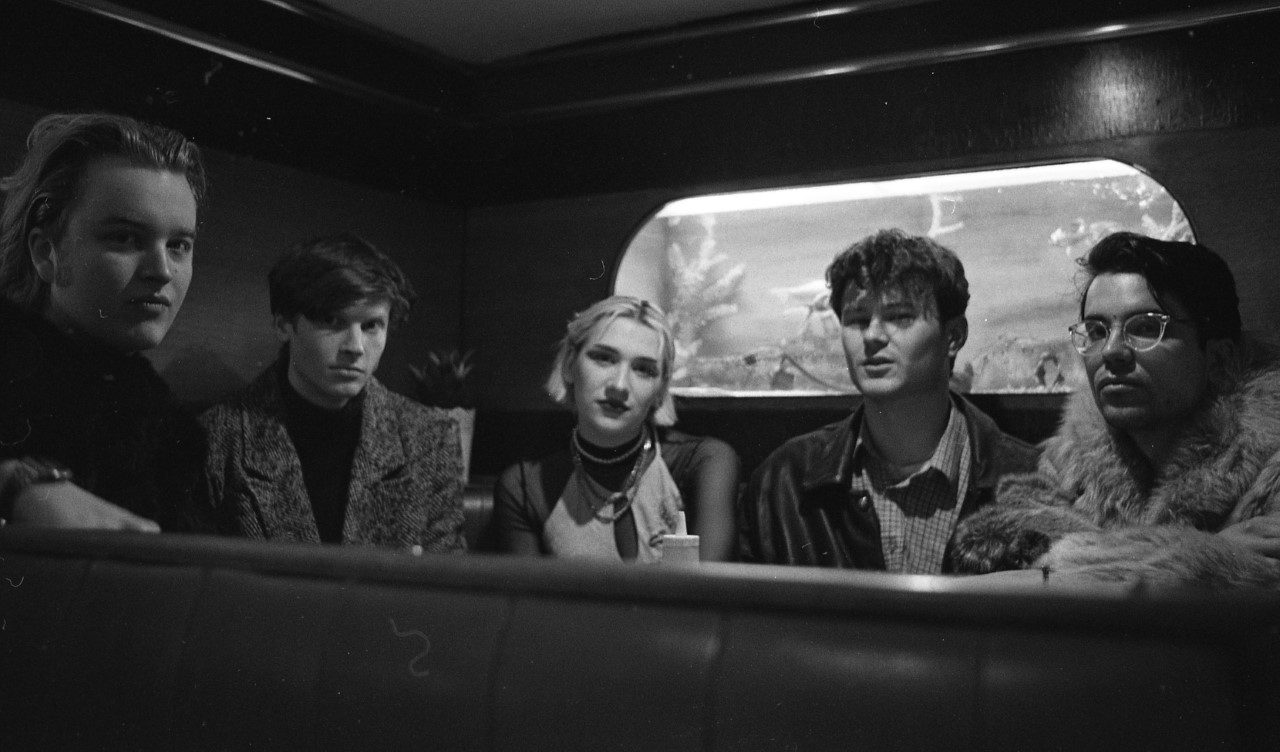 PELICAN TUSK are a band who defy categorisation. A basement flat in Glasgow formed the setting for the five-piece to come together, experiment and develop their sound, resulting in their two previous singles ‘Abyss’ and ‘Creature With Wings’ and now their upcoming EP ‘Rhubarb’s House’.

What those early offerings indicated was a band willing to tread beyond the ordinary, follow their instincts and bring together a melting pot of influences to create something strangely alluring, unexpected and hugely ambitious.

Now TENEMENT TV are delighted to bring you the premiere of Pelican Tusk’s brand new single ‘Freaked Out (Inside the Machine)’, lifted straight from the upcoming ‘Rhubarb’s House’ EP.

“There really is no one thing or style that’s brought us together and what makes the band so fun is that it feels any song can go in any direction” they tell us when we catch up with them about the track. It’s a statement that sums up the single perfectly.

‘Freaked Out (Inside The Machine)’ can sonically and conceptually be split into three parts, yet each part comes together to create one compelling whole. Opening in rather subtly hypnotic fashion with steady rhythms, a warm glow of keys and an alluring lead vocal, the band welcome us into their weird and wonderful world by way of a protagonist who is conflicted with his past and unsure of what is real.

As the tempo begins to speed up with layers and layers of intricate and feverish instrumentation, a surreal saxophone solo takes over and the track plunges into a dream-like state – said to mirror the character entering a strange time machine. The final part sees him come to terms with his surroundings, as if suspended in another dimension yet with greater clarity. Steeped in melancholy and loungey psychedelia, the final part is a far more ambient affair but our attention never wavers.

The band say “Freaked Out (Inside the Machine) is from the perspective of someone unsure what’s real and what’s a projection. In the track the person is able to go back inside a mysterious machine to see for sure. Time machine or eternal-sunshine-esque machine is up to the listener. All we know for sure is that is contains surreal saxophone performed by the legend (frontman Sam’s Uncle) Phil Bancroft.”

“90% of the track was recording in Sam’s basement flat, having the luxury of no time limit to finish the tune is probably a big reason why it turned out the way it did which we’re really happy about. Over the year a lot of parts were rerecorded and remixed until it felt right.”

‘Freaked Out (Inside The Machine) is a fascinating sonic journey from start to finish. Absolutely brimming with creative ideas, it offers a compelling mix of strong rhythms, loungey psychedelia, jazz, indie, funk and enticing melodies, all while moving entirely at its own pace and offering an intriguing insight into the band’s upcoming EP. Not only does it mark a significant shift in their songwriting and production, it’s also different from anything we’ve heard from their local peers. Without a doubt, Pelican Tusk are a band who will take listeners by surprise.

Discussing how they got together they said: “Sam had been writing and recording for a few years in a lo-fi bedroom environment, which was a great way to develop the sound, and resulted in our previous singles and upcoming EP, but there came a point where bedroom recording felt a bit old and turning it into a live band was by far the most exciting thing to do. Getting Rhauri, Vili, Hayley and Calum together has taken all the songs to the next level, and as a group collaborating and rewriting has meant there’s a lot more different influence injected into the music which we think you can really hear in our set”

“There are definitely other bands with this mentality in Glasgow, but we really don’t have any care for what genre or category our sound is fits into. It gets pretty stressful when people ask what we sound like. Indie is probably an easy place to put it but the unsureness is something we embrace. We definitely strive to be a band where the live show feels really organic, if someone were to listen to one of our recordings and then come see it live, we love the idea of the listener being thrown off because they weren’t expecting it to go in a certain direction from what it does on the record.”

Having worked on the four-track EP for well over a year, ‘Rhubarb’s House’ is expected to arrive in early March and is said to give an even greater idea of the direction they’re looking to go with the band. They added “Since the band have come together we’ve been writing a lot and we’re really keen to record as much as we can. All the songs are pretty different and its hard to see that slowing down, so to keep sanity, getting them done and cleared from the ‘to record and finish’ pile will be great to keep it all going.

“ Apart from that we can’t wait to keep gigging and play more places outside of Glasgow. (although we love gigging in Glasgow a lot)”

Check out ‘Freaked Out (Inside a Machine)’ below and its accompanying visuals. Pelican Tusk headline the Amsterdam Bar on Friday 7th February. 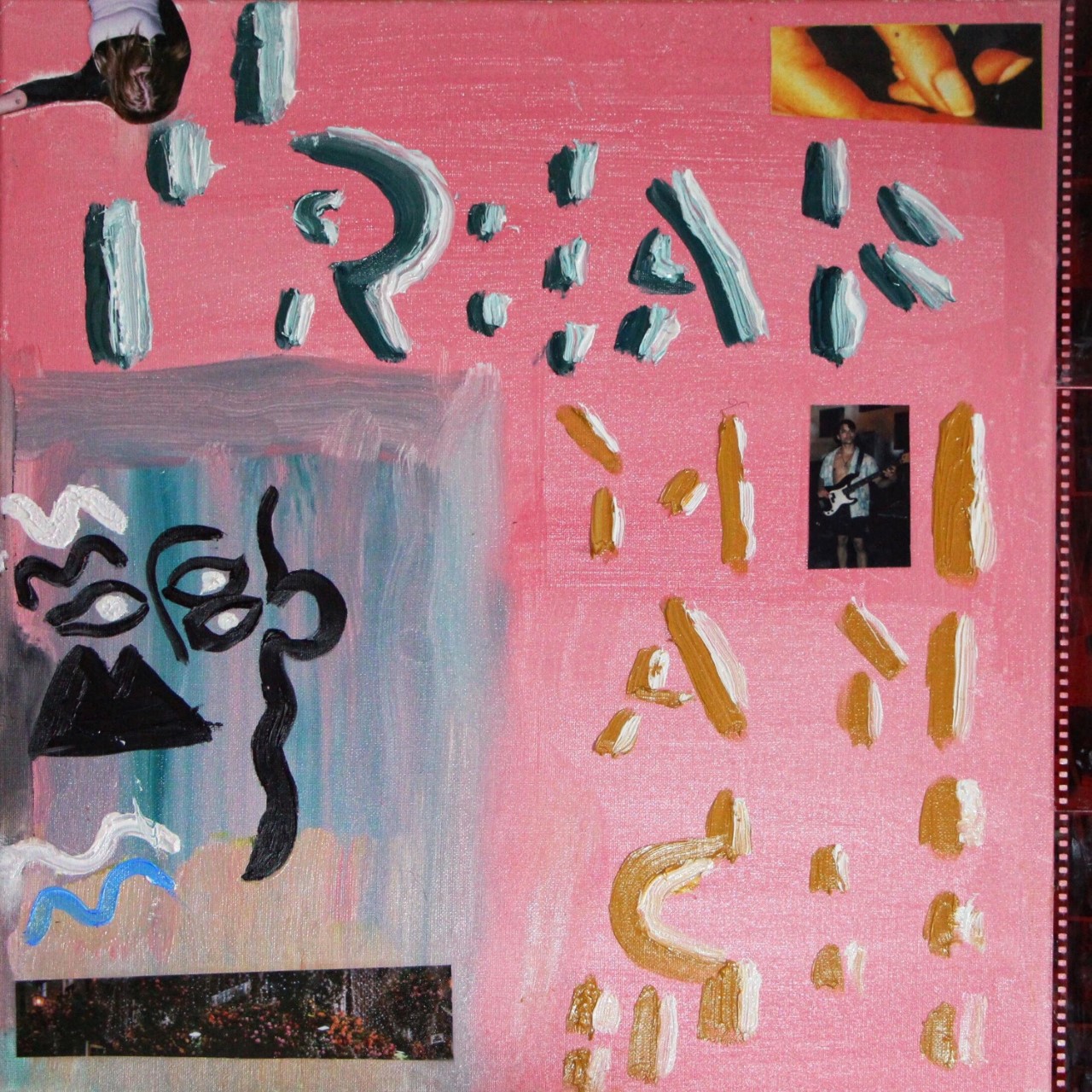