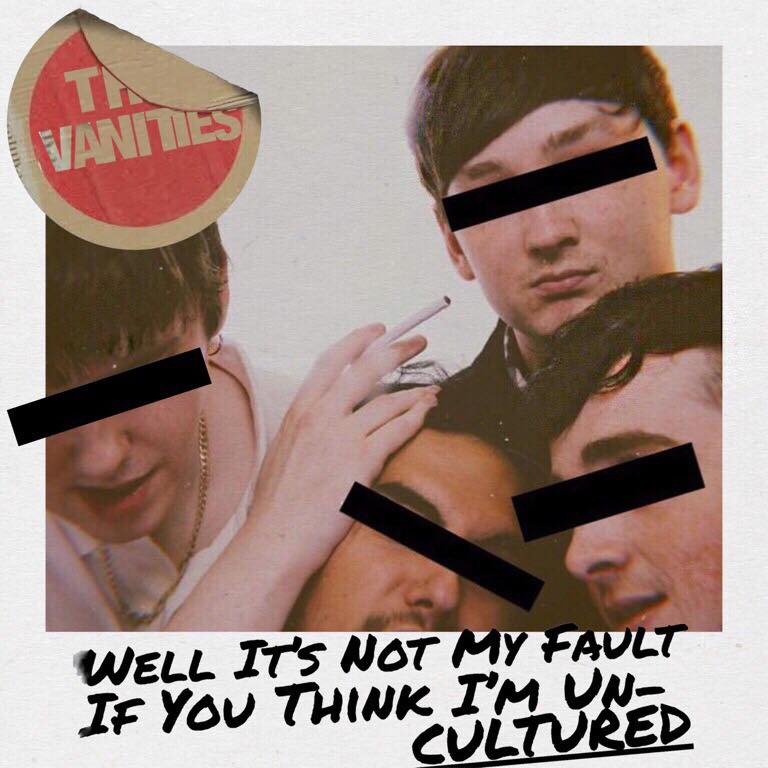 TENEMENT TV are delighted to bring you the exclusive first play of The Vanities’ debut EP ‘Well It’s Not My Fault If You Think I’m Uncultured’.

The four-piece come tearing out of the blocks on their first extended release which arrives just weeks after they supported long-time heroes The Stranglers at Kelvingrove Bandstand. Featuring the previously heard ‘38’s’ and ‘Gang Culture’ with two new tracks ‘Scumbag’ and ‘Smash N Grab’ thrown in for good measure, it’s an ode to punk pioneers of the past that also sees them assert their own authority and realign themselves at the very forefront of the city’s thriving punk scene.

A thrilling sense of urgency and youthful exuberance drives the whole EP from the very outset. ‘38’s’ sets the tone for the collection, every bit as hard-hitting and infectious as we remember it as Alan Hannah depicts a night of debauchery in Glasgow. ‘Gang Culture’ comes next; an energetic slice of indie-rock we were delighted to premiere here on TTV only last month which finds the band railing against those who harbour misconceptions of the younger generation and supposed ‘gang culture’. The riff-driven urgency of the track is only alleviated by way of some ska-aping rhythms which make their way to the surface now and again.

There’s an undeniable vocal resemblance between Hannah and The View frontman Kyle Falconer. His rugged delivery is acerbic and jagged at times, delivered over an onslaught of breakneck riffs and stomping rhythms as he leads the EP’s most anthemic moments. He is almost indecipherable over the quick burst of energy that is the View-esque ‘Scumbag’ which features chanting choruses and the welcome addition of a harmonica.

Tearing through the four tracks at breakneck speed, they match their youthful spirit and bravado with sharp insight; a fact that is reinforced with the final offering ‘Smash N Grab’. Their storytelling narratives are populated with an equally compelling cast of characters, their combination of punky riffs and frantic narration offering a raw and unfiltered yet wholly refreshing vision of the Scottish adolescent experience.

Frontman Alan Hannah said: “The EP is 4 stories of scumbags, debauchery, schemes, and pissing it all up the wall. It’s all different tales of failures; as Irvine Welsh one said “You Don’t Learn Anything From Success”. It captures our live sound a bit more accurately than anything we have had released before, a little bit more of a ruckus and rough around the edges. This is our experience of adolescence, and if it isn’t yours – Well It’s Not My Fault If You Think I’m Uncultured”

Without rehashing the glories of their heroes The Clash and The Libertines, The Vanities use their debut EP to stamp their flag into the ground and take a big step forward. It’s the latest milestone for a band who are clearly reaping the benefits of their own hard work and unassailable drive.

Available on all streaming platforms tomorrow, the band will launch the EP with a gig at The Priory on Saturday.

Check out the EP below.